Accessibility links
How To Pick Streaming TV Services: Life Kit As more television streaming services pop up, consumers face more choice than ever. NPR's TV critic lays out a streaming strategy, so you know what options are worth your time. 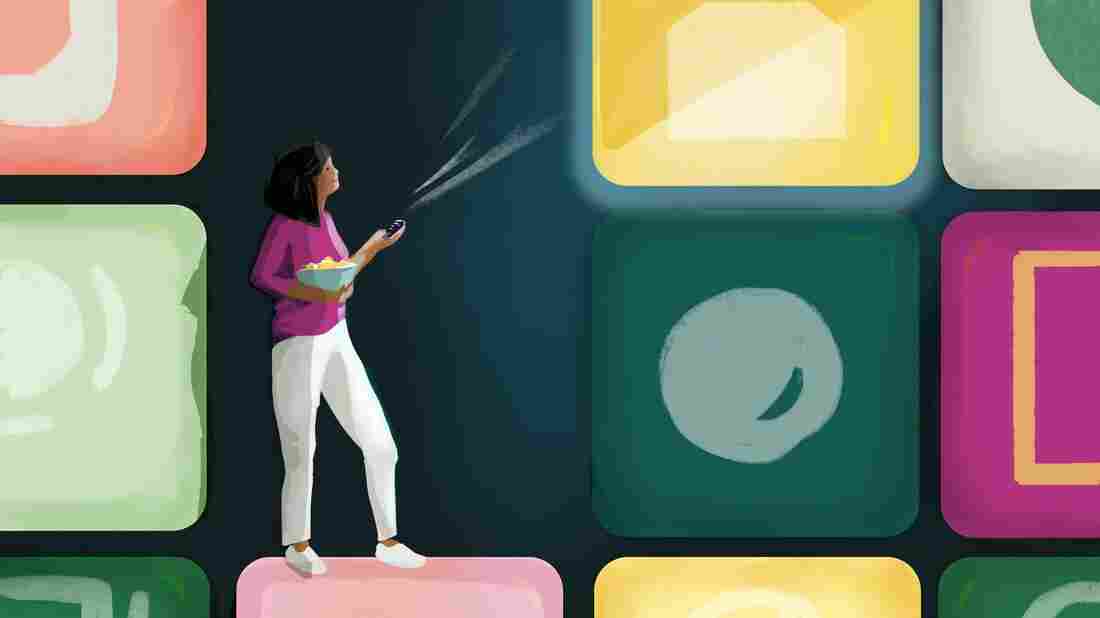 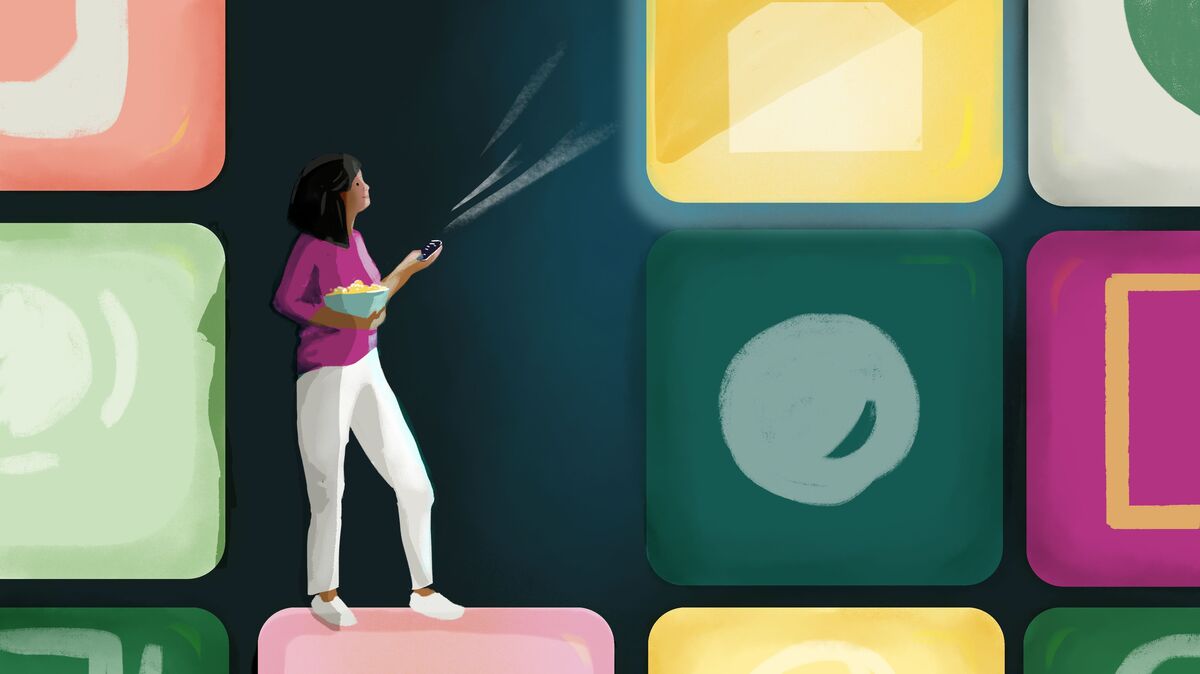 There are a lot of new television shows coming at you right now, thanks in part to the flood of new TV streaming services. The choices are exciting, and with the extra TV time social distancing is giving us, we might actually have time to catch up on some of the many offerings.

Comic Jim Gaffigan summed it up best in a funny bit from his Netflix special — yes, there's a touch of irony here — called Cinco. "Sometimes I open my Netflix and (say) ... 'I'm not going to make a dent here,'" he cracks, pretending to put off friends asking if he's seen Game of Thrones by admitting, "I'm a little behind ... Give me a week, my wife had a dumb baby."

This story comes from Life Kit, NPR's podcast with tools to help you get it together. Listen to the podcast episode at the top of the page, or find it here.

The numbers are a little intimidating. In a recent study, the TV ratings service Nielsen found 60 percent of Americans subscribe to at least one streaming service (although the Pew Research Center also says roughly 25 percent of Americans lack broadband Internet access at home).

And when Nielsen counted all the shows available, across all kinds of programs and platforms, they found more than 646,000 unique titles were available to watch last year.

There are more shows coming, as deep-pocketed media and technology companies develop new services, creating something of a streaming war. Apple TV+ and Disney+ debuted in November 2019, while HBO Max, NBC's Peacock and short-form streamer Quibi will be available to consumers by May 2020.

But fear not. We've got some tips to help you pick out the streaming services that are actually worth your time.

1. Accept that the options will feel a little overwhelming, at least at first.

Beibei Li, an associate professor at Carnegie Mellon University, studies the connection between human decisions and disruptive technology. She says the kinds of decisions people make in selecting streaming services are the types of choices we are the worst at making.

One reason, she says: they involve "high dimensional" features – in other words, lots of detailed factors that are tough to sort and compare, like programming lineups, brand name, price, creative quality and more.

Also, people often don't know what exactly they want to watch on TV.

"This is like getting a gym membership," she says, laughing. "You thought you're going to go, but then (it turns out) you just like the idea you have the membership ... So you thought you (wanted to) binge watch all these TV shows, you get a Netflix membership and then you realize you didn't watch much."

I'm pleading the fifth when it comes to questions about my gym membership. But that does lead to the next tip ...

2. Track your viewing and create a TV diary.

Spend a week writing down what you actually watch on TV — not what you remember watching later or what you want people to think you watch — and you may be surprised by the results.

I predict you'll learn a couple of things. First, if you're strict with yourself, you may realize there are a lot fewer programs and outlets on your "must see" list than expected. Second, it will be obvious what your ideal lineup of streaming services should include.

Caissie St. Onge, a TV writer and producer who served as showrunner for the now-cancelled E! talk show Busy Tonight, says she doesn't like the idea of paying for lots of TV content she might not watch.

"I do have that guilty kind of feeling where ... I shouldn't be spending even a few dollars on this thing that I'm not really looking in on," she adds. "I don't have a great deal of time to watch television myself. So I do rely a lot on what I hear, word of mouth [from friends]. And that does help me make my selections a little bit."

3. Choose a few base services with a wide array of content, then add smaller platforms to suit your needs.

How To Pick The Streaming TV Services You Actually Want

I've grouped streaming services into a few different categories; an effective TV strategy will likely involve signing up for a mix of them.

Megaproviders: Streamers that want to provide all or most of the programs you watch. These are services with lots of material, across lots of genres, including lots of original and repurposed/library content. The list includes Netflix, Hulu and the soon-to-debut HBO Max.

Add-on services: These platforms can't encompass all of most people's TV habits, but they still have lots of great original and library material. I'd include Apple TV+, Disney+, PBS Passport and CBS All Access here.

Quirky faves: These streaming services are focused on very specific tastes, like horror-focused Shudder or anglophile platforms Acorn and Britbox.

Free stuff: Some streamers don't have subscriptions fees, like Facebook Watch, Tubi, Pluto TV, the non-premium version of YouTube and IMDB TV. But be warned: many of these platforms do have advertisements, so the piper gets paid one way or another.

A good strategy would include a few megaproviders as a base, with a rotating mix of add ons services and a quirky fave or two along with some free stuff to round everything out.

4. Don't be afraid to experiment and tweak your lineup of streaming services.

Quite a few streaming services may only have one or two programs you want to see. Feel free to subscribe just long enough to binge watch a new season and then drop it to make room for something else (that strategy is easier with services like Quibi, a platform featuring "quick bites" of video content at 10 minutes or shorter, which debuts with a 90-day free trial).

That's what actress and author Mellini Kantayya says she does all the time. "When (a new season of) The Good Fight comes out, I will hop on over to CBS All Access and watch all of that content," she says. "When First Wives Club came out on BET+, I hopped on over to that one, watched that and everything I wanted to watch over there and then cancelled it."

For most streaming services, starting and stopping a subscription is as easy as clicking on an app or website. And if you have trouble keeping track of when series are in new episodes, there are apps for that, like TV Time and Binge Buddy.

5. Despite the anxiety so many people have about making these decisions, it is often easier and less expensive to sample different streamers than it seems.

Last year, Tim Goodman, former TV critic at The Hollywood Reporter, wrote a series of articles about cord cutting, in which he figured out how to replace his DirecTV subscription with an array of streaming services. What he found surprised him.

"There's enough information out there that actually makes it very, very easy for people to do this," he says. "And it's really fast. One of the things I wanted to communicate when I wrote that piece was, 'This is not as hard as people say it is.'"

Goodman says he built on the work of others, looking at pieces by other critics and analysts comparing streaming options. He wasn't trying to lower his costs, but still realized he would save over $100 a month by cord cutting.

And best of all, if you're a fan of television, sorting through all the options can be kind of fun, as long as you relax and enjoy the ride.

After all, it's TV. It's supposed to be entertaining.

If you want more Life Kit, subscribe to our newsletter.

The audio portion of this story was produced by Audrey Nguyen.

How To Read More Books