Accessibility links
COVID-19 Threatens Food Supply Chain As Farms Worry About Workers Falling Ill COVID-19 has turned one end of the food industry — stores and restaurants — on its head. At the other end, food production hums along as usual, but that could change if workers catch the virus. 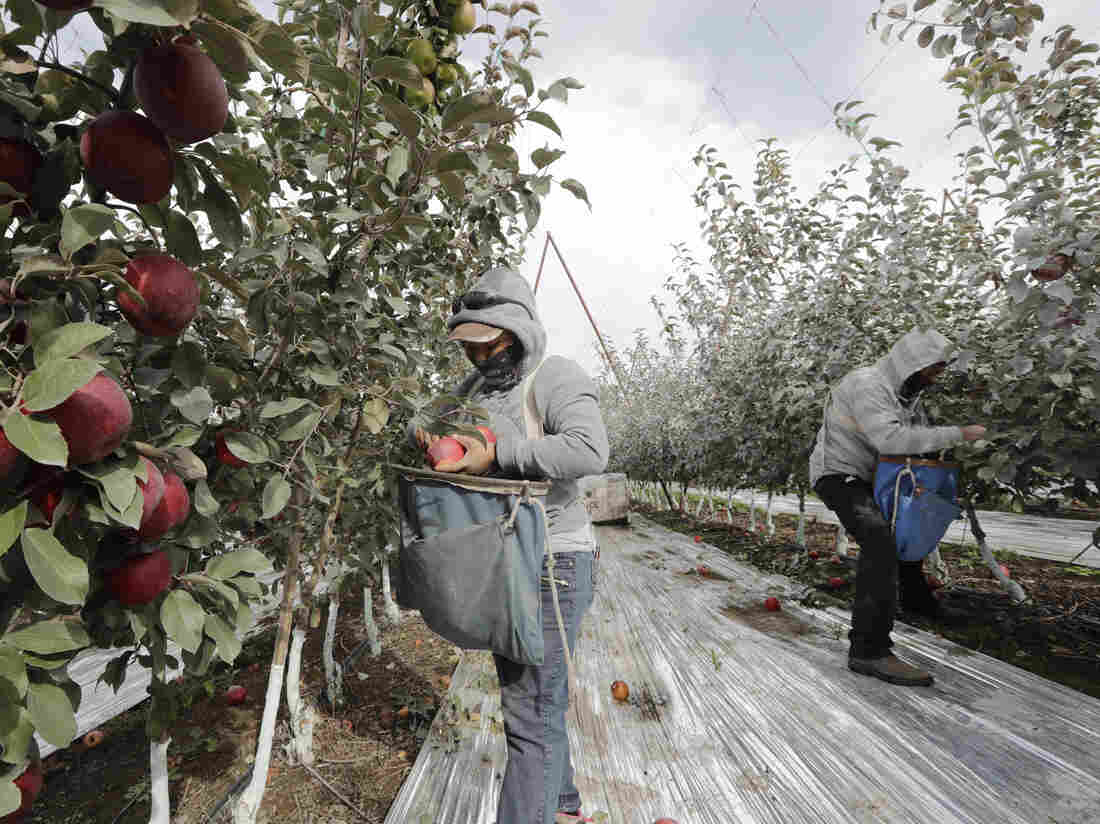 Workers pick apples in a Wapato, Wash., orchard last October. U.S. farms employ hundreds of thousands of seasonal workers, mostly from Mexico, who enter the country on H-2A visas. The potential impact of the coronavirus on seasonal workers has the food industry on edge. Elaine Thompson/AP hide caption Workers pick apples in a Wapato, Wash., orchard last October. U.S. farms employ hundreds of thousands of seasonal workers, mostly from Mexico, who enter the country on H-2A visas. The potential impact of the coronavirus on seasonal workers has the food industry on edge.

As Americans scattered to the privacy of their homes this week to avoid spreading the coronavirus, the opposite scene was playing out in the Mexican city of Monterrey.

A thousand or more young men arrived in the city, as they do most weeks of the year, filling up the cheap hotels, standing in long lines at the U.S. Consulate to pick up special H-2A visas for temporary agricultural workers, then gathering in a big park to board buses bound for farms in the United States.

"I spoke with people going to North Carolina, Kentucky, Michigan, Mississippi," says Justin Flores, vice president of the AFL-CIO's Farm Labor Organizing Committee, who was in Monterrey for meetings. "[They were] headed to destinations all over the country to provide really important labor that supports the backbone of our economy, which is the agricultural industry."

About 250,000 workers came to the U.S. on H-2A visas last year, the majority of them from Mexico. They've become an increasingly important piece of America's food industry.

Late in the day on Monday, the U.S. Embassy in Mexico City announced that it is suspending nonemergency visa appointments because of concerns for the health of its employees and visitors.

At the same time, though, the embassy notified farm employers that many — perhaps most — of these farm workers still can get their visas, because they participated in the program last year and don't require an in-person appointment at the consulate.

Ryan Ogburn, visa director at wafla, which helps farms manage the flow of H-2A workers in the Pacific Northwest, says that 85-90% of their workers will qualify for this exemption. Meanwhile, influential farm organizations in the U.S. are pushing the Trump administration to ease the entry of more guest workers.

The continuing availability of agricultural workers illustrates the paradox of America's food supply in the age of COVID-19.

One end of the food supply chain has been completely upended as restaurants go dark and consumers prowl half-empty aisles of supermarkets. Food producers, though, are operating almost as normal — at least for now.

Slaughterhouses, dairies and vegetable producers say that they are open for business, ready to feed the nation. Howard Roth, president of the National Pork Producers Council, wrote in a statement that "telecommuting is not an option for us; we are reporting for work as always."

Food distributors and wholesalers in the middle of that supply chain, meanwhile, are trying to perform logistical miracles, redirecting truckloads of food from shuttered businesses toward places where people now crave it — mainly grocery stores.

"There's nothing 'as usual' anymore," says Mark Levin, CEO of M. Levin and Co., a fruit and vegetable wholesaler in Philadelphia. Levin normally sells lots of bananas to schools and restaurants, and "unfortunately, all those people, last minute, say, 'I'm sorry, I can't use this fruit. You must take it back, or don't deliver it.' And that's tough, because we've already got it in the system ripening and ready to sell," Levin says.

Can he send those bananas instead to grocery stores that are out of stock? "Yes, but at a reduced price," Levin says.

The problem, Levin says, is that different customers want slightly different things. Schools and other institutions buy boxes of loose "petite" bananas, with 150 bananas in a box. "Grocery stores don't want those," he says.

At least people are still eating. Drinking is a different story.

"We're losing a lot of occasions, regular things like birthday parties or weddings, where people normally get together," says Stephen Rannekleiv, who follows the beverage sector for RaboResearch Food & Agribusiness.

"For the beverage world, those are occasions for consumption. We're losing some of those," Rannekleiv says. He notes that in China, overall demand for alcoholic beverages has fallen by about 10% during the coronavirus crisis.

There's an even bigger worry hanging over the food industry: The prospect of workers testing positive for COVID-19.

When it happens, the response likely will go beyond sending that individual home — although that alone can be catastrophic to field workers who are paid, in part, based on their production. This week, the United Farm Workers union called on employers to expand paid sick leave for workers.

Vegetable growers are considering policies that would require quarantine for everyone who worked in close proximity to the infected person. That could easily include two dozen or more people. Workers on H-2A visas often live together, sharing kitchens and bedrooms and traveling together on buses. The virus could spread quickly, and measures to stop it will be extremely costly.

According to Steve Alameda, a vegetable grower in Yuma, Ariz., losing an entire 30-person work crew overnight will be extremely disruptive. Farmworkers already are hard to find, and replacing so many people immediately could prove impossible.

"We've got enough disruption," Alameda says. "We don't need to disrupt our food supply, that would be really catastrophic."