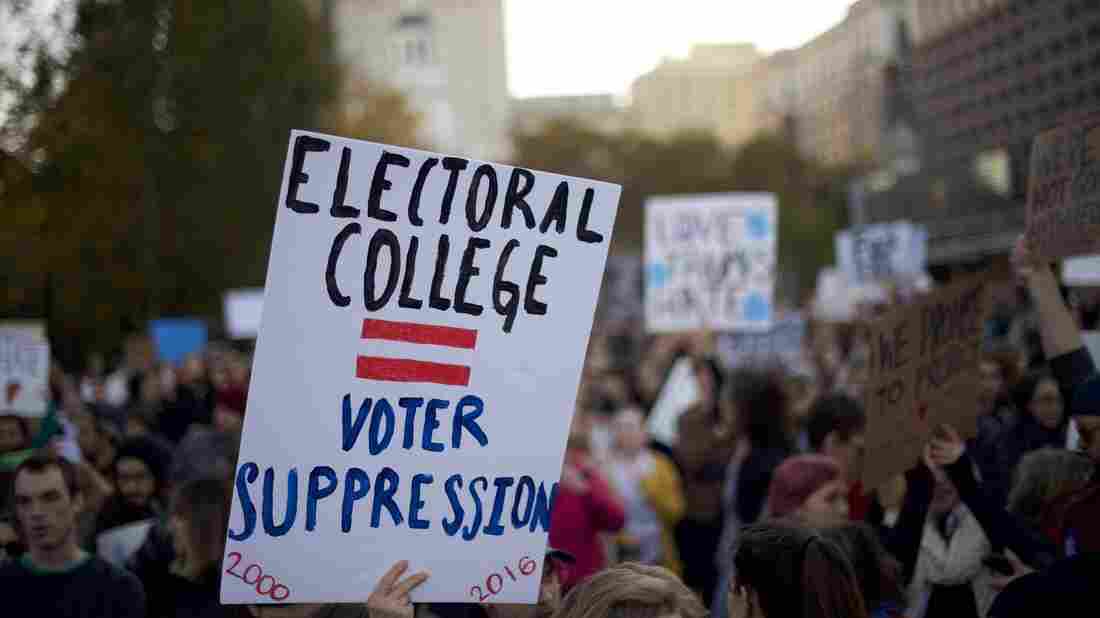 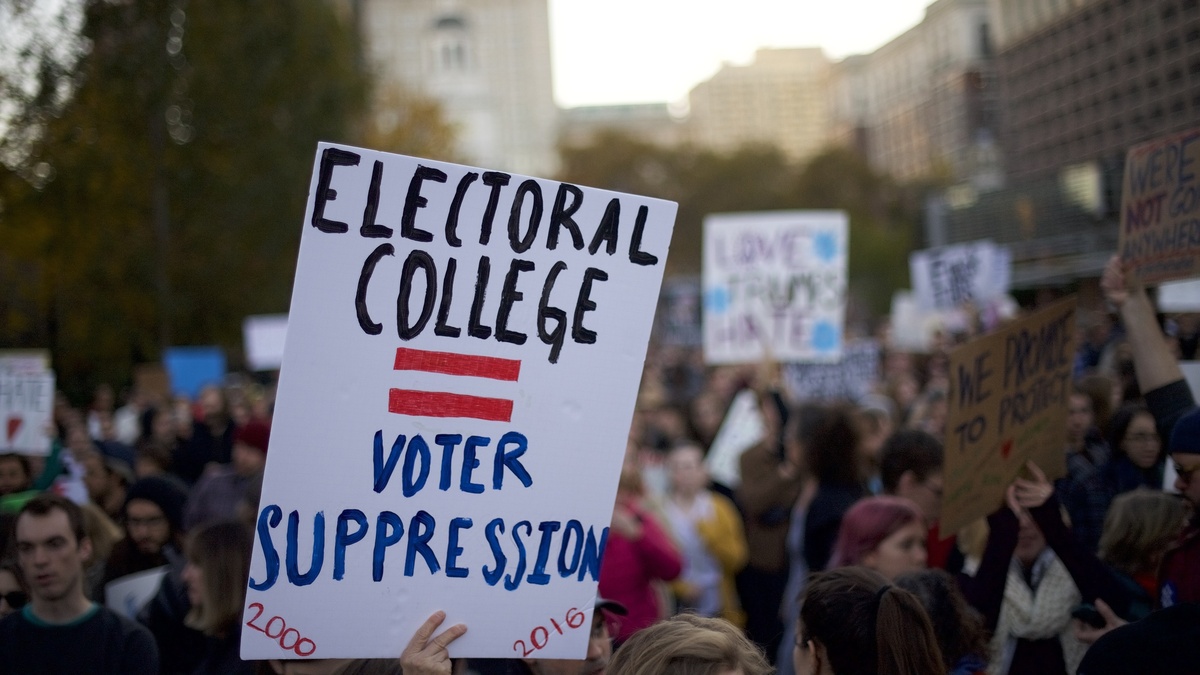 Protestors demonstrate against President-elect Donald Trump in Philadelphia in 2016. Trump won the presidential election despite losing the popular election by more than two million votes.

The U.S. has had two recent presidential elections in which the winner of the popular vote — Al Gore in 2000 and Hillary Clinton in 2016 — ultimately lost to the challenger for the seat.

That's because the U.S. has an Electoral College — each state gets a number of votes (by representative electors) in the Electoral College that's proportional to its population. And 48 of the 50 states (Maine and Nebraska are the exceptions) have been awarding those electoral votes on a winner-takes-all basis.

But New York Times journalist Jesse Wegman says it doesn't have to be that way: "The way the Electoral College operates today is not carved in stone," he says. "The winner-take-all rule is really just a state invention. There's nothing keeping us from changing it to a different method."

In his new book, Let the People Pick the President, Wegman makes a case for abolishing the Electoral College. He notes that the winner-takes-all model means that millions of voters become irrelevant to a presidential election that is often decided by voters in key "battleground" states.

How Does The Electoral College Work, And Is It Fair?

"There are millions of Republicans in 'blue' California and there are millions of Democrats in 'red' Texas," he says. "All of those people just disappear when it's time to actually cast the electoral votes, because those states use winner-take-all."

Wegman notes that there have been more than 700 attempts to reform or abolish the Electoral College since its inception. Recently, states began working together to create the National Popular Vote Interstate Compact, which would award the Electoral College votes to the candidate who wins the popular vote. 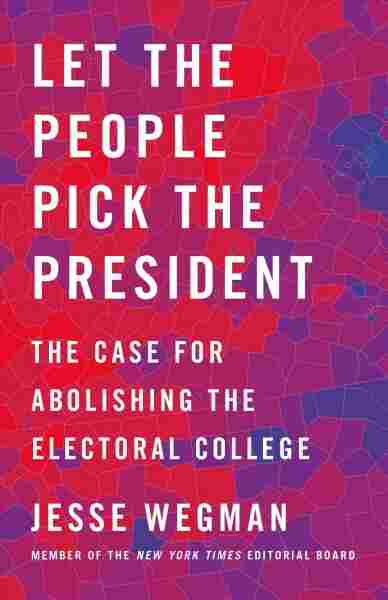 Let the People Pick the President

The Case for Abolishing the Electoral College

On how the Electoral College works

Beyond that, the states make all the decisions. They decide how those electors are going to be chosen, how they're going to be awarded. And that's what we're doing on Election Day, is we are picking the electors and deciding how they're going to be awarded to the candidates. So, for example, in 2016 in New York, all the voters come out, they vote, and whichever candidate wins the popular votes in the state, all of the electors for that candidate go to Albany, the state capital, in December to cast the actual votes to elect the president. And that's replicated in every state in the country, as I said, except for two, Maine and Nebraska.

The whole idea of this interstate compact is based on the fact that the Constitution gives the states themselves near total authority to decide how to award their electors to the candidates. A state can, as we see today in 48 states, give all of their electors to the candidate who wins the most votes in their state. They can allocate them by congressional district, as two states — Maine and Nebraska — do. The governor, him or herself, could personally decide whom to give the electors to. The state lawmakers could decide to do this.

On the states who have signed onto the compact so far

I think what would surprise a lot of people is to know that this compact itself, the effort itself and the response to it has been remarkably bipartisan.

Fifteen states right now are member states of this compact, plus the District of Columbia for a total of 196 electoral votes. ... All of these states were controlled by Democrats when they passed the compact. They started with Maryland in 2007 and [in] 2019 we got, I think, a wave of new states joining as Democrats won back statehouses and governorships following the 2018 midterms.

It's not surprising on one level, because Democrats are the party that lost both in 2000 and 2016, you know, lost, even though winning the popular vote. So you can understand the frustration. But I think what would surprise a lot of people is to know that this compact itself, the effort itself and the response to it has been remarkably bipartisan. ... It's a bipartisan group of people. It's Republicans, some Trump-supporting Republicans as well as some very liberal Democrats. They've been working together for more than a decade on this. And they've actually won over a lot of Republican lawmakers in a lot of states. In fact, the compact has passed Republican-led chambers in four different states.

What ended up happening was the 2016 election. Right before that election, you had three states that are led by Republicans, what we would call "red" states, that were on the verge of passing this compact and joining it along with the "blue" states that are currently members. As soon as the 2016 election happened and people realized the sort of the repartisaning of the Electoral College happened. It was off the table.

The winner-take-all rule that all these states use today and that I think most Americans assume is just the way the Electoral College works is purely state-designed. It's purely extra-constitutional. States adopt it for one very specific reason, which is it gives them extra clout in the election.

On how winner-take-all is not written into the Constitution

This is what's fascinating. It's nowhere in the Constitution. None of this is in the Constitution except for the number of electors that each state gets. They decide everything after that fact. So the winner-take-all rule that all these states use today and that. I think, most Americans assume is just the way the Electoral College works, is purely state-designed. It's purely extra-constitutional. States adopt it for one very specific reason, which is it gives them extra clout in the election.

On the problem with winner-take-all states being battleground states

That's the fundamental problem here, which is that when you use a winner-take-all system statewide, most states are going to fall into what we call the safe category, which is they are polling far enough in favor of one candidate or the other that nobody has to pay attention to them. Take California: It's right now a very solidly Democratic state. You know that California is going to cast more votes for the Democrat than for the Republican. Texas, same in the other direction. The vast majority of states fall into that category right now.

That leaves us with roughly 10 to 12 states each year, each presidential election year, that you call battleground states. And those are states where the outcome is too close to predict in advance. And that means that the candidates spend essentially all of their time, all of their money, put all of their focus on those states. And really, it's fewer this year than 10 or 12. I would say it's six, maybe seven at most. And we know which they are: Wisconsin; Pennsylvania; Michigan; Arizona; North Carolina and Florida. Maybe we could add in one or two more, New Hampshire. Basically, those states are the states that are going to decide the election, because you can allocate all the rest of the electors in advance. And that's just fundamentally at odds with this idea that we're holding a national election that should be decided by all the people being treated equal by the candidates.

On how the Electoral College disproportionately affects voters of color

In the South right now, millions and millions of votes by black citizens basically don't count for anything, because white citizens in that state are enough of a majority to always ... win all of the electors in those states. So black voters in the South who vote for Democrats — which means virtually all blacks right now — are essentially invisible in every presidential election. So you see these patterns replicating themselves throughout our history. The people who stopped the popular vote amendment in the late 1960s were Southern segregationists. Some of the people who prevented us from getting to a popular vote in the founding of the country were slave holders. Again and again, the pattern repeats itself.

When candidates run for president now, they really only have to worry about the interests of small numbers of voters. So, for example, what do you know people in Ohio want, or what do people in Florida or Wisconsin want? I think that leads to candidates who are naturally going to be more extreme, more divisive. They don't need to worry about what most voters in America want. You saw that in 2016 with Donald Trump. When you have to appeal to the vast majority of voters, you have your policies are going to, by nature, become more moderate, become more in the middle of where most Americans are. I think most Americans do not want extreme policies. They want mainstream policies. And if you are appealing to them, they are going to vote for a candidate who advances those rather than for the candidate out on the fringes.