Accessibility links
5 Takeaways: With Coronavirus Top Of Mind, Biden On Track To Be Dem Nominee Former Vice President Joe Biden won the Florida, Illinois and Arizona Democratic primaries all by double digits Tuesday. And he's building a delegate lead that may very well be insurmountable. 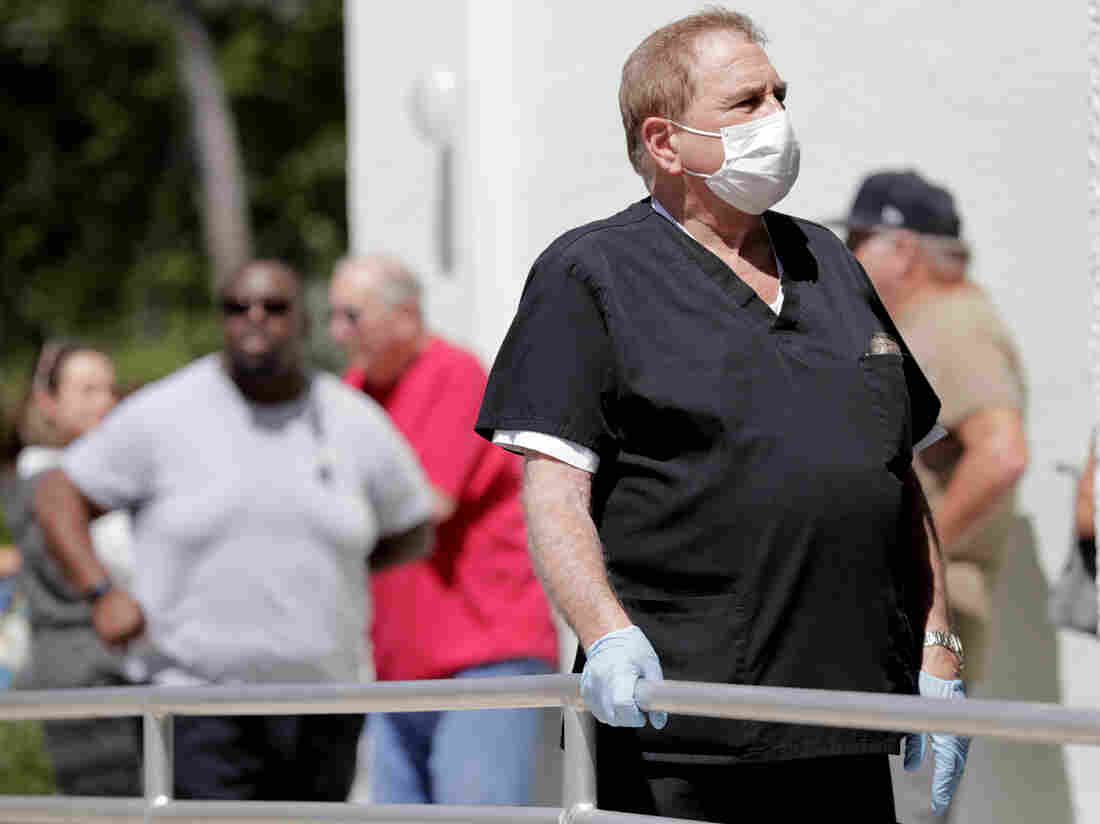 Harold Goodman waits in line to vote in the presidential primary election at the Supervisor of Elections office in Delray Beach, Fla. This polling station was made available after some precincts in Palm Beach County were unable to open after poll workers did not report to work. Lynne Sladky/AP hide caption 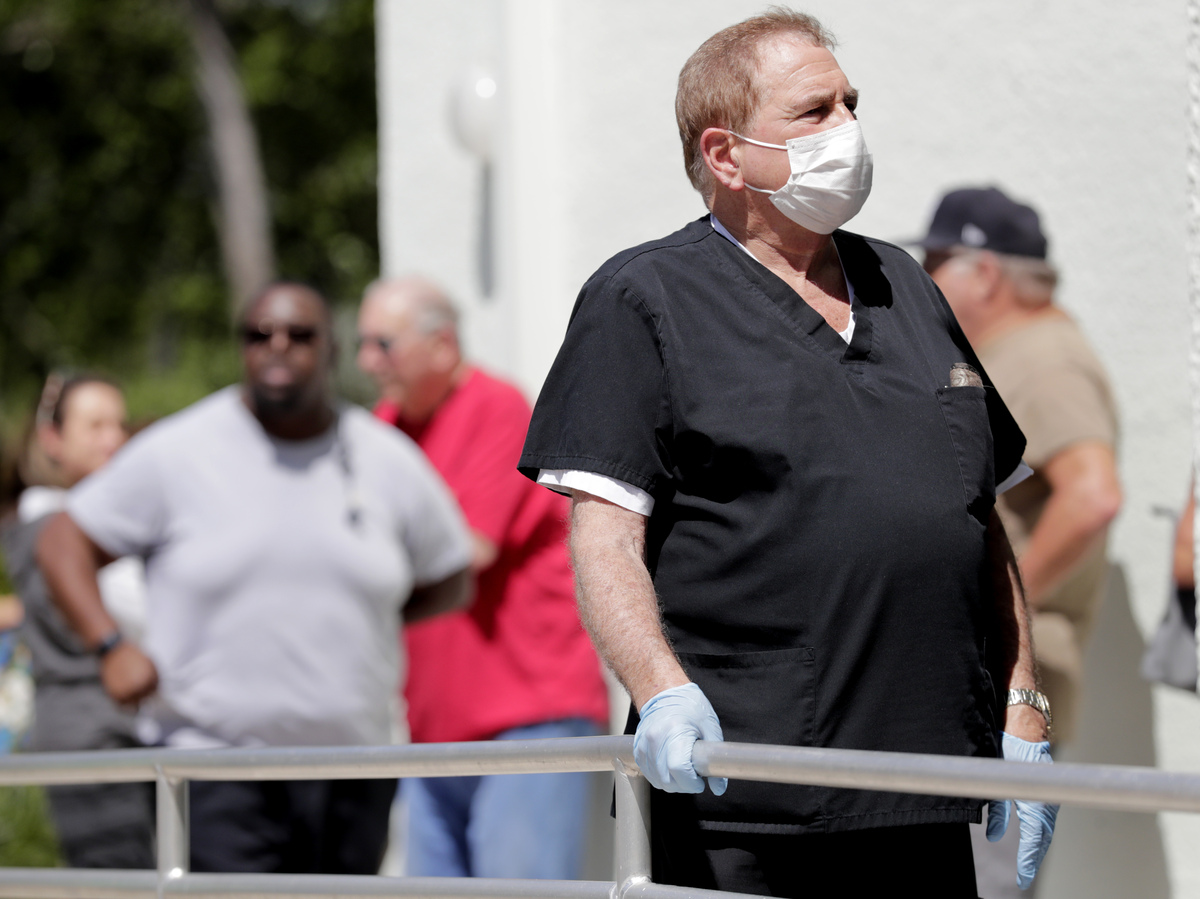 Harold Goodman waits in line to vote in the presidential primary election at the Supervisor of Elections office in Delray Beach, Fla. This polling station was made available after some precincts in Palm Beach County were unable to open after poll workers did not report to work.

In what have turned out to be the last presidential primary elections in the month of March because of the novel coronavirus, Joe Biden swept all three states Tuesday by big margins and appears well on his way to being the Democratic nominee.

The former vice president won Florida by almost 40 points, Illinois by more than 20 and Arizona by double-digits, too.

It was a remarkable night that adds to Biden's delegate lead that, at this point and because of how Democrats allocate their delegates, looks insurmountable.

Here are five takeaways from a big election night and what it means going forward:

1. Biden is on track to be the Democratic nominee

Biden expanded his delegate lead and is now ahead of Vermont Sen. Bernie Sanders 1,147 to 861. That 286-delegate lead is very difficult to overcome because there are no winner-take-all primaries, delegates are apportioned according to the vote.

To put that lead into perspective, Biden needs 47% of all remaining delegates to become the nominee; Sanders needs 63%. What's more, many of the states ahead favor Biden, so it's hard to see how Sanders not only wins in many of those places, but wins in all of them overwhelmingly.

During his speech Tuesday night, Biden reached out to Sanders supporters, many of whom have been highly skeptical of the former vice president.

"Sen. Sanders and I may disagree on tactics, but we share a common vision," Biden said, rattling off affordable health care, income inequality and climate change as shared issues they want to solve.

"Sen. Sanders and his supporters," Biden said, "have brought remarkable passion and tenacity to these issues and, together, they have shifted the fundamental conversation in the country. And let me say, especially to the young voters who have been inspired by Sen. Sanders: I hear you. I know what is at stake. And I know what we have to do."

It's all part of an effort from Biden to win over voters to his political left. He co-opted Sanders' free-tuition-at-public-colleges plan, Massachusetts Sen. Elizabeth Warren's bankruptcy plan and pledged at Sunday's debate to put a woman on the ticket.

But it's a challenge for Biden to win over Sanders' coalition. In two Democratic presidential nomination contests young voters have been overwhelmingly with Sanders. They were not enthusiastic about the prospect of Hillary Clinton as the nominee in 2016, and they have not been warm to Biden.

Biden will need every voter he can get, given the last presidential election was decided by fewer than 80,000 votes spread across Michigan, Wisconsin and Pennsylvania.

The coronavirus pandemic has changed everything, consuming daily life and the campaign. Voters Tuesday said they were worried about it — and voters in all three states said they would trust Biden more than Sanders to handle a crisis overwhelmingly, according to exit polls.

The latest NPR/PBS NewsHour/Marist poll showed most Americans don't trust the information coming from the federal government or President Trump. Trump has an opportunity to try to turn that around now that he appears to be taking the pandemic more seriously.

Leadership is on the ballot, taking center stage. And Biden clearly has the trust of Democratic voters as a leader.

4. Women have propelled Biden over the last few weeks and did so again

No matter how many times it's said, it's worth saying again: Women are critical to Democratic politics. They fueled the resistance to Trump, they propelled Democrats to take back the House and they have been crucial to Biden getting to this point in the Democratic nomination race.

Tuesday was no different. Biden won women by wider margins than men in all three states — in Arizona, he won them by 7 points; in Florida, it was 8; and Illinois, it was a whopping 26 points.

The support of women, in particular suburban women, is crucial not just in winning the Democratic nomination, but also the general election.

Sanders won twice as many Latino votes as Biden in the California primary but did not repeat that dominance Tuesday.

Biden, in fact, won a majority of Latinos in Florida and split them with Sanders in Arizona.

Mexican Americans make up most of the Latinos in the West and Southwest. In Florida, though, significant shares of the Latino population are of Puerto Rican and Cuban descent. Many Cuban Americans, in particular, are wary of Sanders' equivocal statements about Cuba's communist government.