Accessibility links
Review: 'Blow The Man Down' Is Maine By Way Of 'Fargo' Two sisters attempt to cover up a killing in a fishing village that harbors its own sinister secrets in this film that evokes the tone of films like Fargo and Blood Simple.

It Ain't Cabot Cove: Murder In Maine Haunts The Twisty 'Blow The Man Down'

It Ain't Cabot Cove: Murder In Maine Haunts The Twisty 'Blow The Man Down' 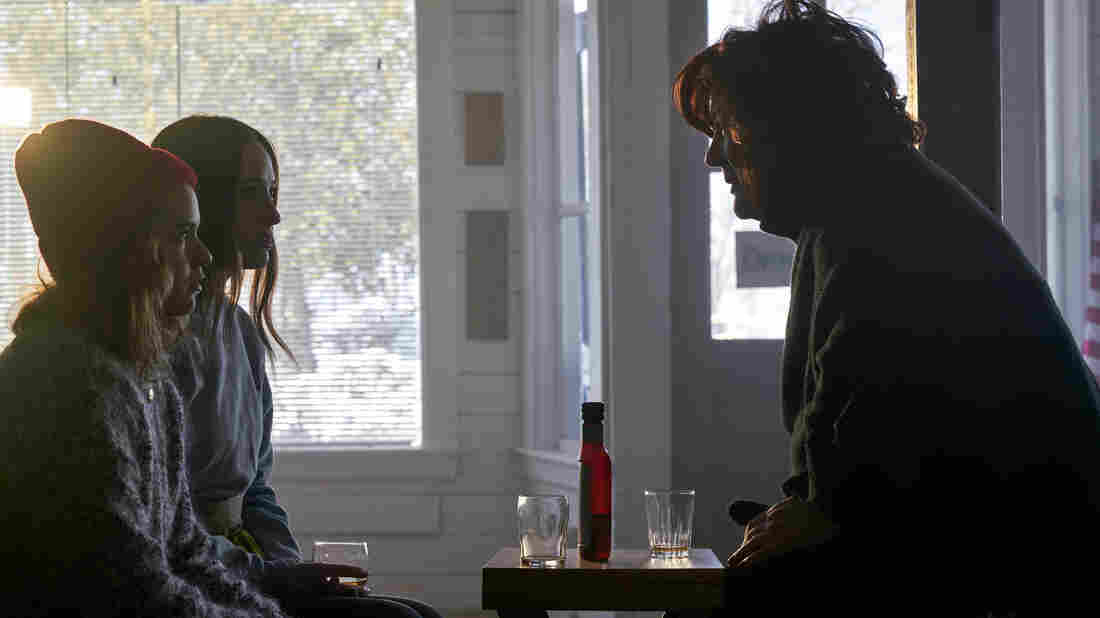 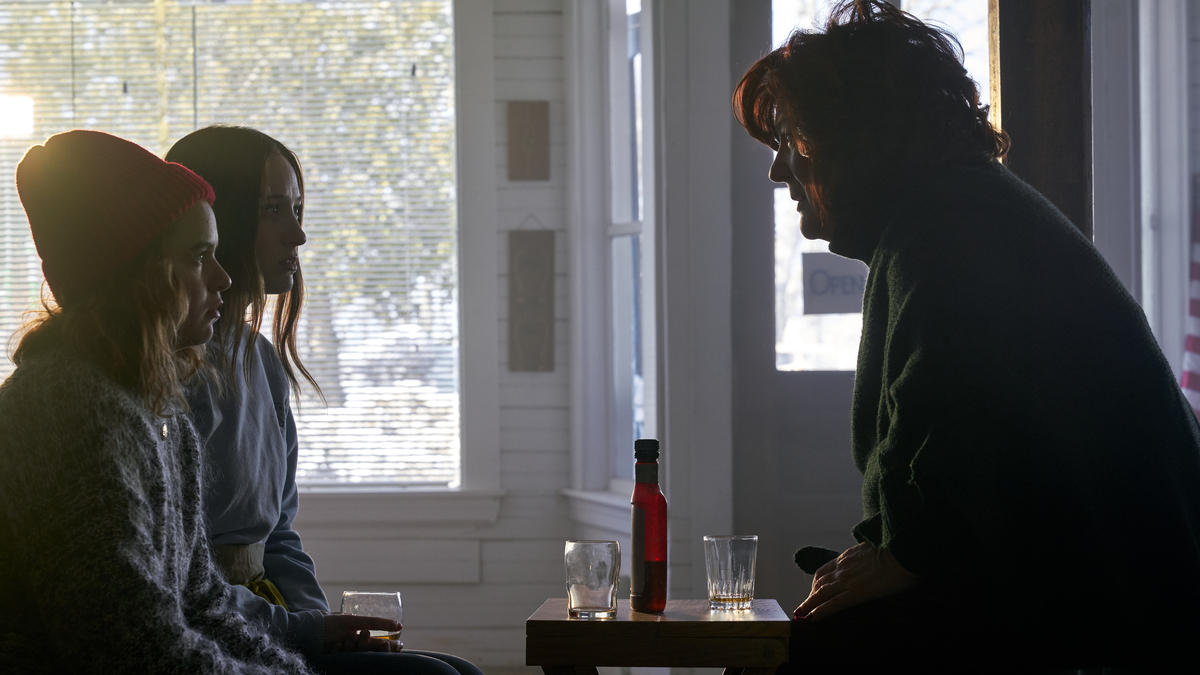 Mary Beth (Morgan Saylor) and Pris (Sophie Lowe) get a stern talking-to from Enid (Margo Martindale) in Blow the Man Down.

Note: Blow The Man Down will be available for streaming Friday, March 20, on Amazon Prime.

Tourists know coastal Maine as an idyllic summer spot of rocky beaches, lobster piers, cute little towns where independent bookstores and coffeeshops still thrive, and the bed-and-breakfast places are among the quaintest in the country. Blow the Man Down takes place in the fictional seaside town of Easter Cove, Maine, and while no approximate location is given, it looks like a straight latitudinal line to Brainerd, Minn., the primary setting of Joel and Ethan Coen's Fargo. There's surely a time of year when the snow and wind doesn't bite at your skin, but the film makes it impossible to imagine.

The Fargo connections run deeper still in Bridget Savage Cole and Danielle Krudy's tight, evocative drama. Beyond the frosty milieu, the two share a fascination with macabre crimes committed by ordinary people and the inevitability of amateurish mistakes and crises of conscience. Though the twists and turns are unsurprising for anyone schooled in the Coens — or in this type of genre film in general — Cole and Krudy make the backdrop the star: a fishing village where the past informs a sinister present and women struggle to find their place in a brutal patriarchy, often taking it out on one another.

Opening with burly fisherman singing the sea shanty of the title — a wonderful touch the film repeats to great effect — Blow the Man Down starts with two sisters, Mary Beth and Priscilla Connolly, who are finally burying their mother after a long illness. Mary Beth (Morgan Saylor) and Pris (Sophie Lowe) have inherited problems that are keeping them penned down in Easter Cove for the time being, including a house that's on the brink of foreclosure and a lightly trafficked fish market. But those worries are minor compared to the grisly events that follow, when Mary Beth goes out drinking the night of the funeral and comes back begging her sister to help cover up a crime.

In truth, Mary Beth was in the right. She has a reputation around town for "liking the creeps" and she found herself a doozy that night, but given her own inebriation and recklessness, she and Pris assume the police won't understand why she harpooned a man in self-defense. As the Connollys set about sloppily hiding the body and other evidence, some other ugly subplots in Easter Cove begin to surface, including another dead body connected to the Oceanview, a local brothel catering to the port. The Oceanview's proprietor, Enid (Margo Martindale), holds many of the cards in this whole scenario, but how she chooses to play them is anybody's guess.

In an inspired bit of writing and casting, Cole and Krudy have hired three veteran actresses — June Squibb, Annette O'Toole and Marceline Hugot — as the village busybodies and standard-bearers, always sticking their nose in other people's business. The history of Easter Cove, and of the brothel especially, accounts for a fascinating split between the morally upstanding trio and Enid, who sees herself as continuing a service that's foundational to the community. Martindale has excelled at playing against her gentle image as a Russian agent on The Americans and a criminal mastermind on Justified, but Enid is a slipperier character, ruthless yet not entirely irredeemable.

It's normally not a great sign when the lead characters are less compelling than anything around them, but the Connollys' predicament opens up the weird bits of village mythology and feminine conspiracy that secretly drives the film forward. Blow the Man Down functions just fine as a skillful replication of Fargo or Blood Simple, but Cole and Krudy's attention keeps drifting to the darker edges of Easter Cove, where such crimes of passion seem folded into a rough-hewn way of life. Isolated from the rest of civilization — Maine yet as discreet as a snow globe — it plays by its own unwritten rules and the film teases them out beguilingly.