Accessibility links
On The Comforts Of Vast — And Familiar — Videogame Worlds Troubling times can lead you back to wander the hills and valleys of vast videogame worlds you've already beaten — or abandoned.

Head Back To Hyrule: When This World Is Uncertain, Return To Game Worlds That Aren't

Head Back To Hyrule: When This World Is Uncertain, Return To Game Worlds That Aren't 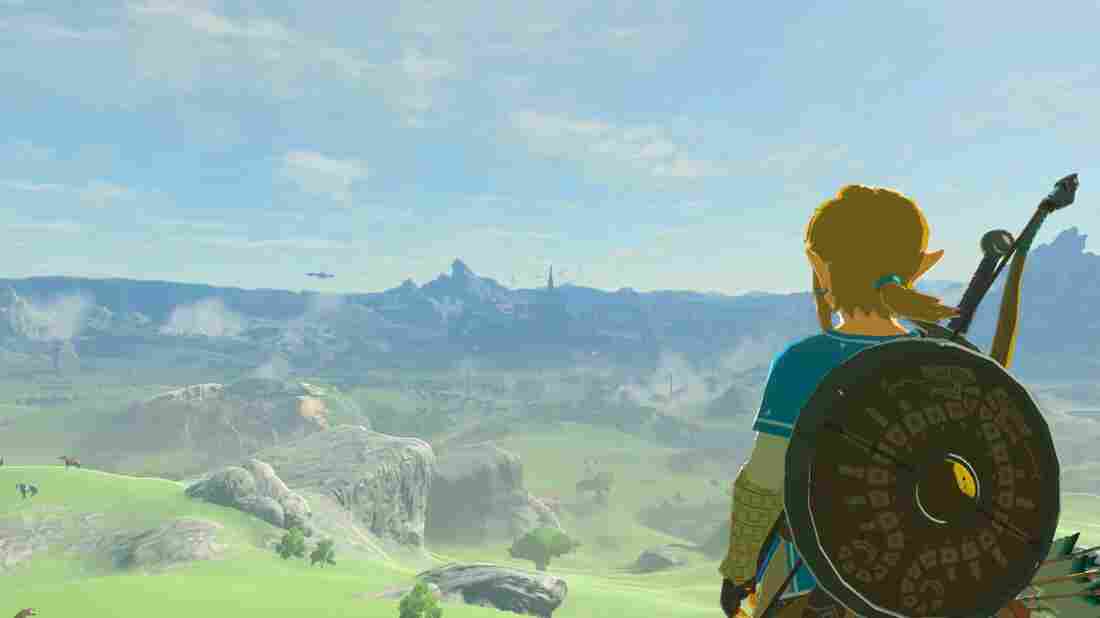 You could fight enemies and go on quests in Zelda: Breath of the Wild — or you could just explore the vast and comforting world of Hyrule. Nintendo hide caption 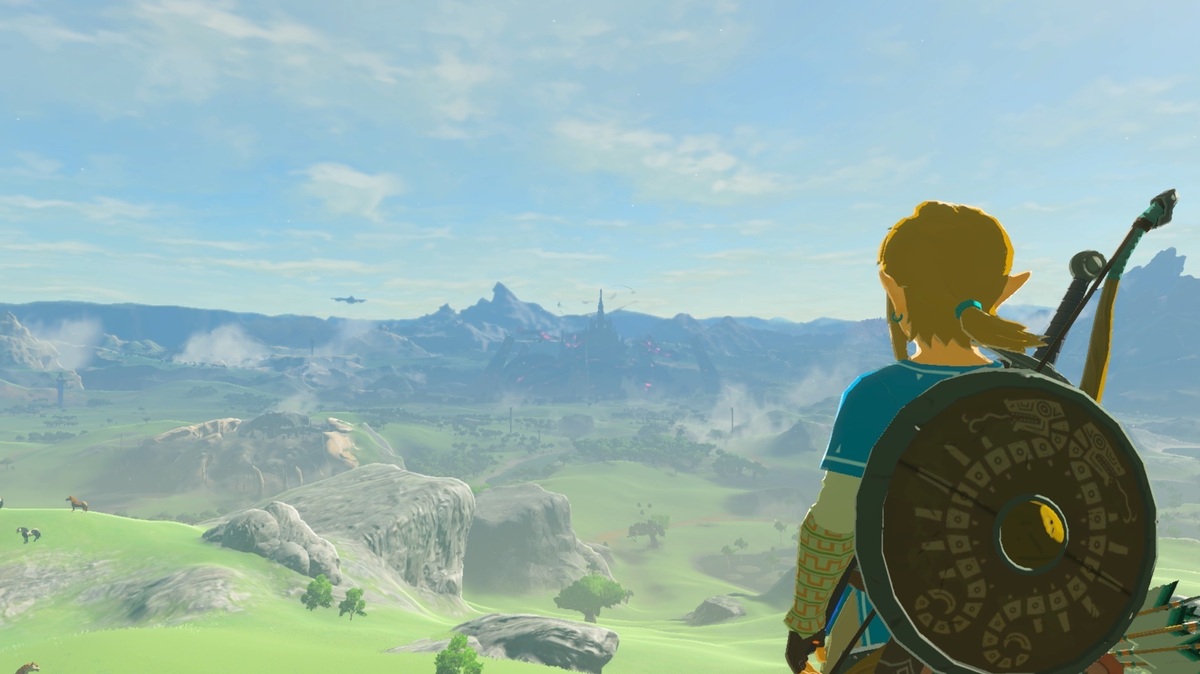 You could fight enemies and go on quests in Zelda: Breath of the Wild — or you could just explore the vast and comforting world of Hyrule.

When it comes to videogames, I'm no bitter-ender.

If anything, I'm a dilettante. I've played many games with gusto for hours upon hours, to near-completion, only to get distracted by something — work, husband, dog, whatever — that keeps me away from them for a few days. By the time I pick up the controller again, everything about the game in question — my location, my objectives, whatever the hell the L3 button does — has been wiped from memory. I'm a babe in the virtual woods, but my opponents don't know that. They know only that I'm at a relatively high level, that I've unlocked most of the map, and I've secured myself the good armor. They come at me with their advanced-level ferocity, and proceed to wipe the floor with me.

It's dispiriting, so, over and over again, game after game, I bail, thinking I'll come back to this. Someday. When there's time.

And now? Today? With the world as it is, there's anxiety and uncertainty — plenty of both.

Some will eat through the hours they'll be spending at home with books, movies, television shows and games they've never encountered, enriching their experience with novel discoveries. I'll be doing ... some of that.

But what I've already started doing is returning to games set in vast worlds full of panoramic landscapes and lonely vistas, with craggy mountains and undulating seas, with bustling cities and sun-dappled meadows. It's supremely comforting to find yourself wandering paths you've wandered before, their every turn and twist lodged somewhere in your muscle memory. It's satisfying to look at the world map and see its every once-feathery boundary has sharpened into rigorous clarity. Because the secret of open-world gaming is that you determine just how open any given game is. Yes, you can diligently tick off the objectives like some kind of grade-grubbing grind, or you can, lovingly, chill. Here's what I'm playing/chilling with now, and what I'm playing/chilling with them on.

The vast and immersive

The Legend of Zelda: Breath of the Wild (Switch)

Sure, in this latest Legend of Zelda game, you could do what the game wants you to do, and collect the things that will help you fight the other things that will help you to rescue the princess. Or you could do what I do, and ride your little horsey through Hyrule's breathtaking valleys and mountains and hills and rivers until you find a nice spot to watch the clouds pass by as butterflies flutter around you.

It's a bit harder to avoid combat in this game than it is in BotW, but you can do it — I believe in you. Me, I always plays as a Mage, so for me "combat" is more just "backing quickly away from the scary thing coming at me while throwing panicked fireballs at it," but whatever. If you follow the story path, you'll learn to talk to dragons, but you'll have to fight a lot of them, too. Why not just visit villages and learn how to forge your own armor and weapons? Treat it like the Learning Annex, if the Learning Annex had mudcrabs.

See Breath of the Wild, above, in re: riding your little horsey. Only this time it's the Old West, instead of a fairy tale kingdom, and you're a cowboy, not an elf. Also you probably don't smell very good.

You're young martial artist Ryo Hazuki, and you're tracking down your father's killer in and around the the vast city of Guilin, China. Sure, go ahead and fight folk a lot, if that's your thing. Or you could just wander the city and forage herbs, and gamble, and drive a forklift (long story).

The fun and frustrating

The story elements of the game are strong and challenging, but who's kidding who — the best part of this, and of any Spidey game, is web-slinging your way from Battery Park to Washington Heights, while pausing to perch atop the Chrysler Building and just ... look. (Note: This is the rare game I've played to 100% completion, unlocking every unlockable thing, up to and including the ability to play as Spider-Man dressed only in his tighty-whities, and sending him strolling though the Ramble in Central Park.)

As much as I love fighting baddies with a lightsaber — and love it I do, though I'm terrible at it — this game turned out to be less open than I'd hoped. Several levels feel a bit too Tomb Raider-y for their own good. (Why do I have to keep jumping off ledges to grab a rope? I'm a Jedi! With the Force! I should make the rope come to me!)

Everyone's favorite bald, muscle-bound gruff-but-not-particularly-lovable demigod Kratos is back, with his plucky son in tow, and this time he's on a quest through the realm of Norse mythology, though he's characteristically unhappy about being the plaything of a whole new set of gods. The game keeps pushing you to the next objective, but don't let it boss you around — stop in one of its more gorgeous settings to smell the lutefisk.

I mentioned, on a recent episode of Pop Culture Happy Hour, how much I love old-school Real-Time Strategy games like Age of Empires and Battle for Middle-Earth, in which you start with a town center and a villager and gradually grow your settlement, collecting supplies and building armies with which to swarm your enemies. It's a genre of gaming that's fallen on hard times, recently, with the move to online, where people can purchase upgrades and proceed to kick your butt.

Me, I love the relaxing atmosphere of building up your town and seeing all your little villagers toiling away happily. I asked listeners to send me suggestions of modern strategy games they liked and a listener (Thanks, Houston Taylor!) suggested this one, and man, does it scratch precisely the right itch.

You're in charge of a village of Vikings who must survive harsh winters and mythical beasts and ... other Viking tribes. The graphics are simple but charming, and while I'm still mastering the controls on the Switch, it's exactly the right soothing/engrossing/addictive fuel mixture I've been hungering for, as I settle in for a long quarantine.

They're not for me. Or at least, they weren't.

I've tried a few, over the years, but ... well. The nature of having to play with or against strangers always rubbed me the wrong way. I mean, if I wanted to get gay slurs hurled at me by a nine-year-old I could just walk out my door, without paying a monthly subscription.

But now ... I don't know. Even this early into social distancing, the notion of entering a virtual space and seeing teeming throngs of other people's avatars just sort of ... walking around? And going up to them, and interacting? I imagine it'd feel wholly different, today.

I mean, inevitably I'd be the noob getting repeatedly pwned by some jerk who's camping at the respawn. But I can't help thinking that before too long I'll be grateful for a little human contact-by-proxy, even if takes the form of utter, thorough and unremitting pwnage.