Accessibility links
With Coronavirus, People Are Living And Coping With Social Distancing Social distancing is strongly encouraged as the coronavirus spreads throughout the U.S., but many are making the best out of staying home. 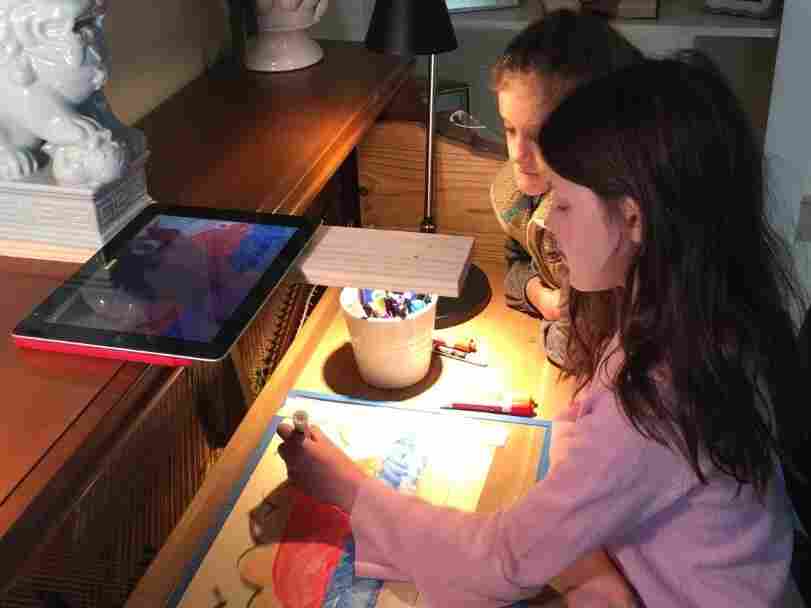 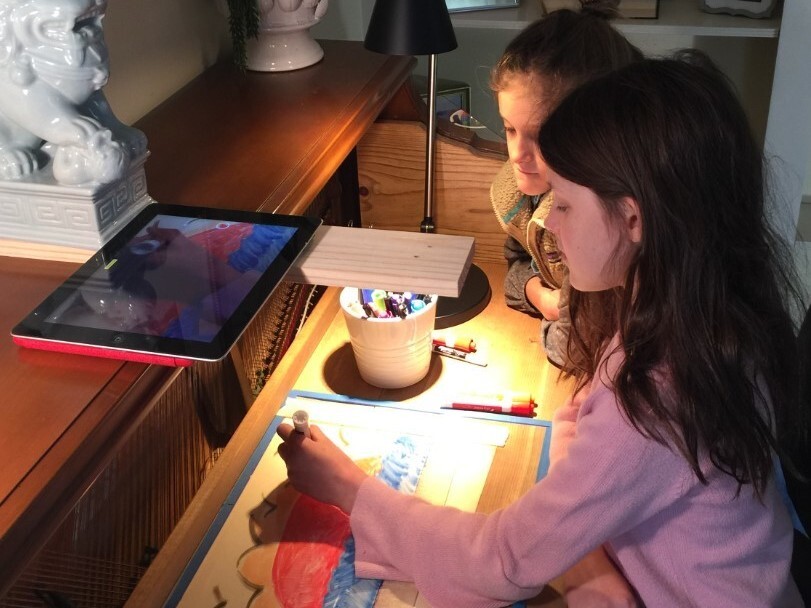 As the coronavirus spreads throughout the United States, businesses and restaurants have closed their doors. People who are used to working in an office are now working remotely. Kids are told they won't be returning to school for some time.

Social distancing is widely encouraged, and is quickly becoming a norm. Despite all the changes to their every day lives, people around the country are finding new routines and ways to entertain themselves.

Bennett VanOudenallen from Cincinnati, Ohio, is one of them. He teaches high school economics and human geography, and recently had to switch to teaching his classes online. While working from home, he found a new activity to do with his two daughters, who are 8 and 9 years old.

"While searching for some new ways to communicate and share content with my students, my daughters and I began singing songs together," he says. "Then they illustrate those songs using markers on a piece of glass. They have to do the entire drawing as the song plays and then we post it on YouTube. They are taking requests from their friends."

VanOudenallen and his daughters are calling the project "Coranaissance," a blend of the words "coronavirus" and "renaissance." The main audience for the videos is his daughters' friends and cousins.

"The idea is to stay positive, connected, and creative while we hunker down together," he says.

Leticia Navarro is a first grade teacher who lives in Riverside, Calif., with her 7-year-old son. While he's out of school, Navarro is finding new ways to make educational activities for him. Like playing Monopoly. 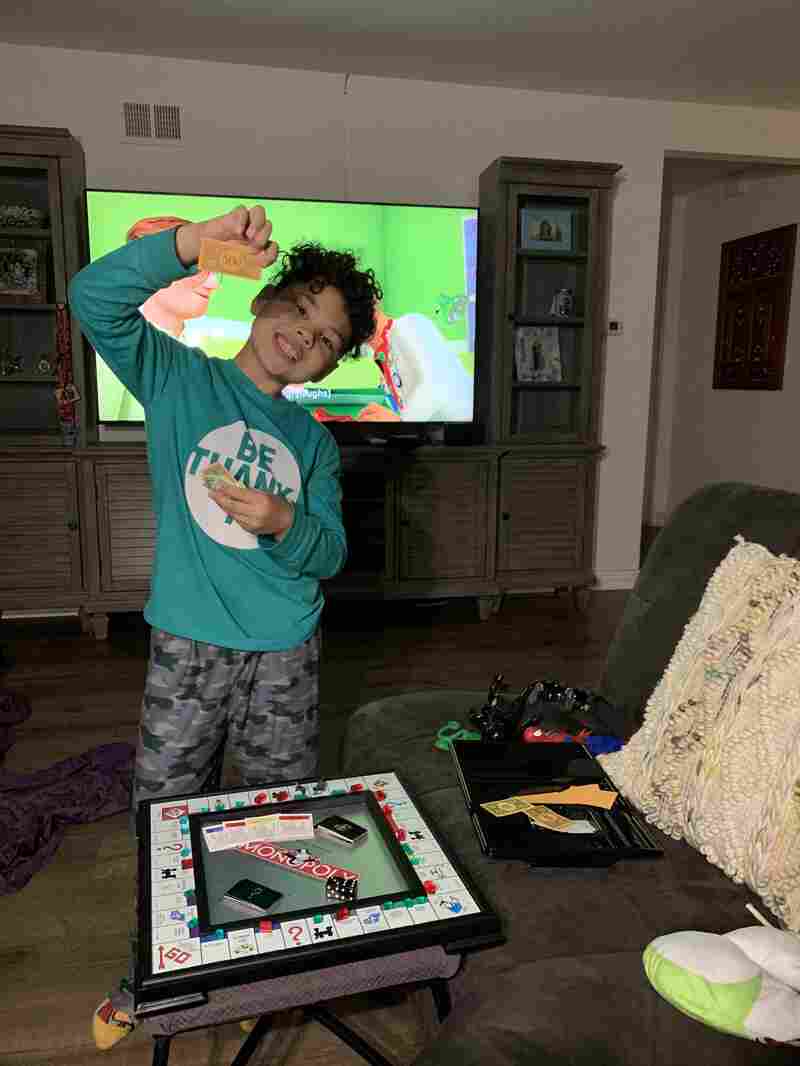 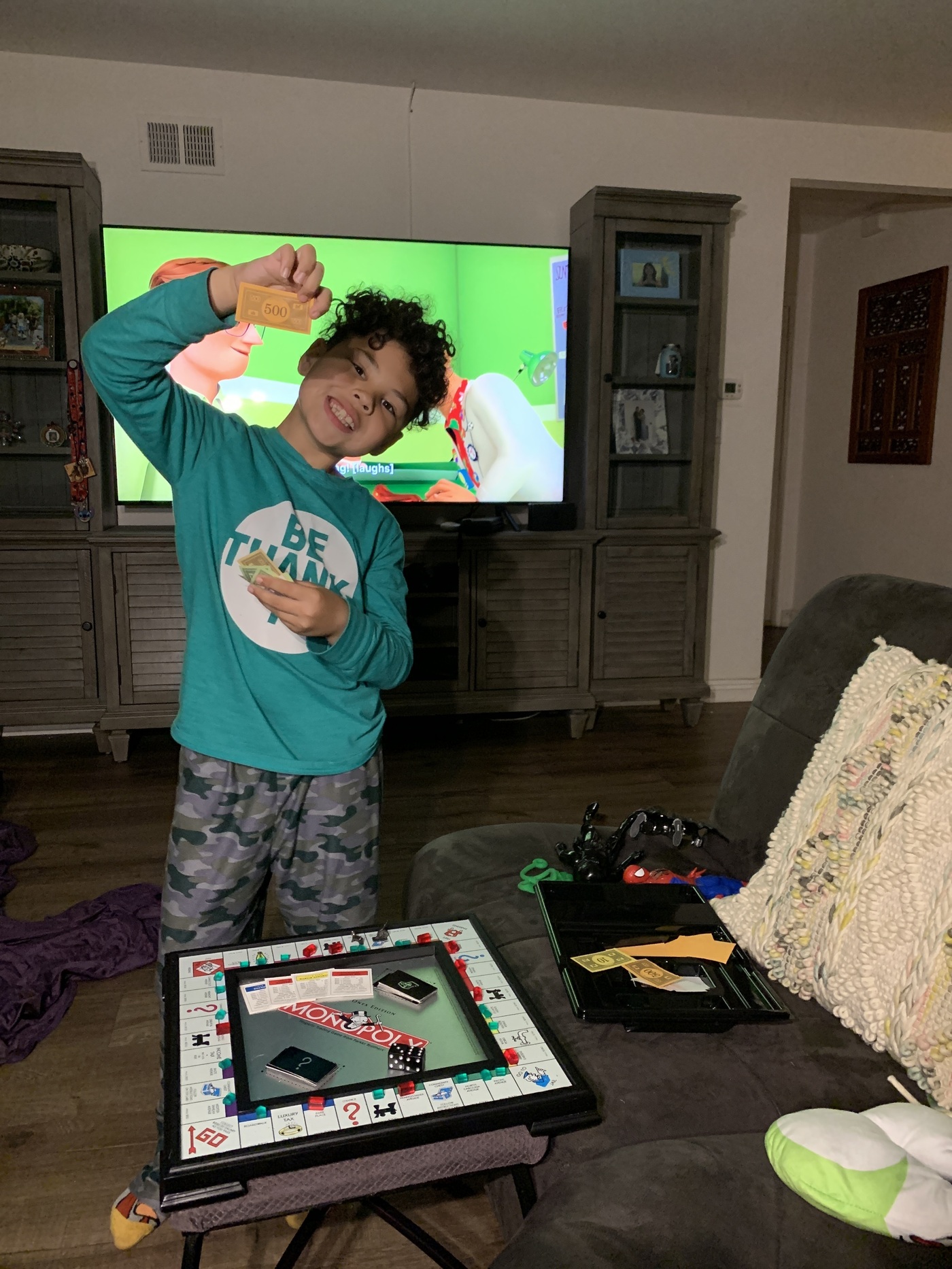 Leticia Navarro plays Monopoly with her son to teach him reading and math skills while he's out of school.

Navarro's advice for other parents who have kids at home and out of school?

"Parents can use game boards or items at home to make up a game," she says. "Kids can build things by using tupperware or other things that may be laying around in the garage. Children love cardboard boxes and use them for many things."

Kenzie Smith, a middle school history teacher from Meridian, Idaho, is concerned about her students who can't go to school right now.

"I am worried about my students, especially those who do not have the greatest home life or who rely on school lunches for their weekly breakfast and lunch meals," she says. "It has been difficult for me to think about what some of my students may be experiencing during this extended break from school."

But even though she's thinking about her students, Smith is also happy to spend this time off campus to be with her 2-year-old son.

When Colleges Shut Down, Some Students Have Nowhere To Go

"I am taking this time to soak in every moment with my son and enjoy our time together that we normally do not get during the week. It has been nice to be home with him," Smith says.

Mike Carr is a Vietnam veteran in Taos, N.M. He works on a veteran-run farm. He grows a variety of plants including lettuce, bok choy, kale, and chard. Even though he has a weak immune system, he still goes to work even with a fear of catching the coronavirus.

"I enjoy my work and we have been donating the greens to help feed the children who are not receiving their lunches due to the schools being closed," Carr says. 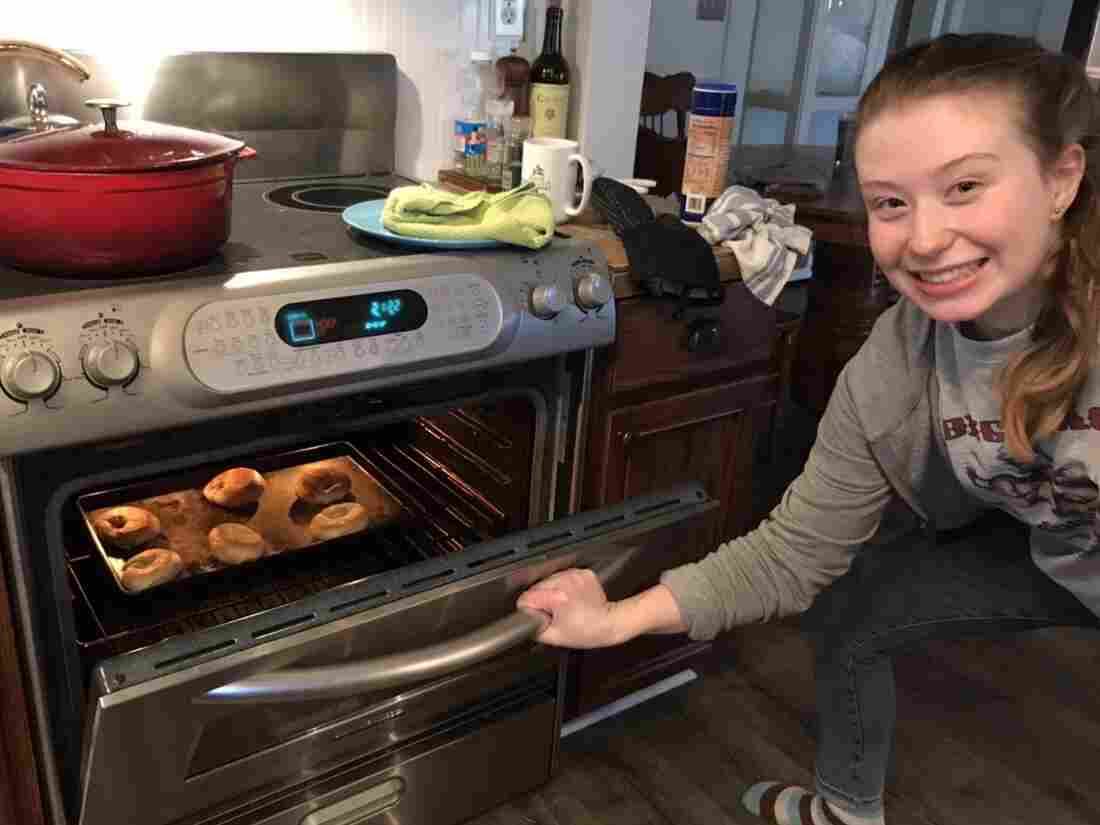 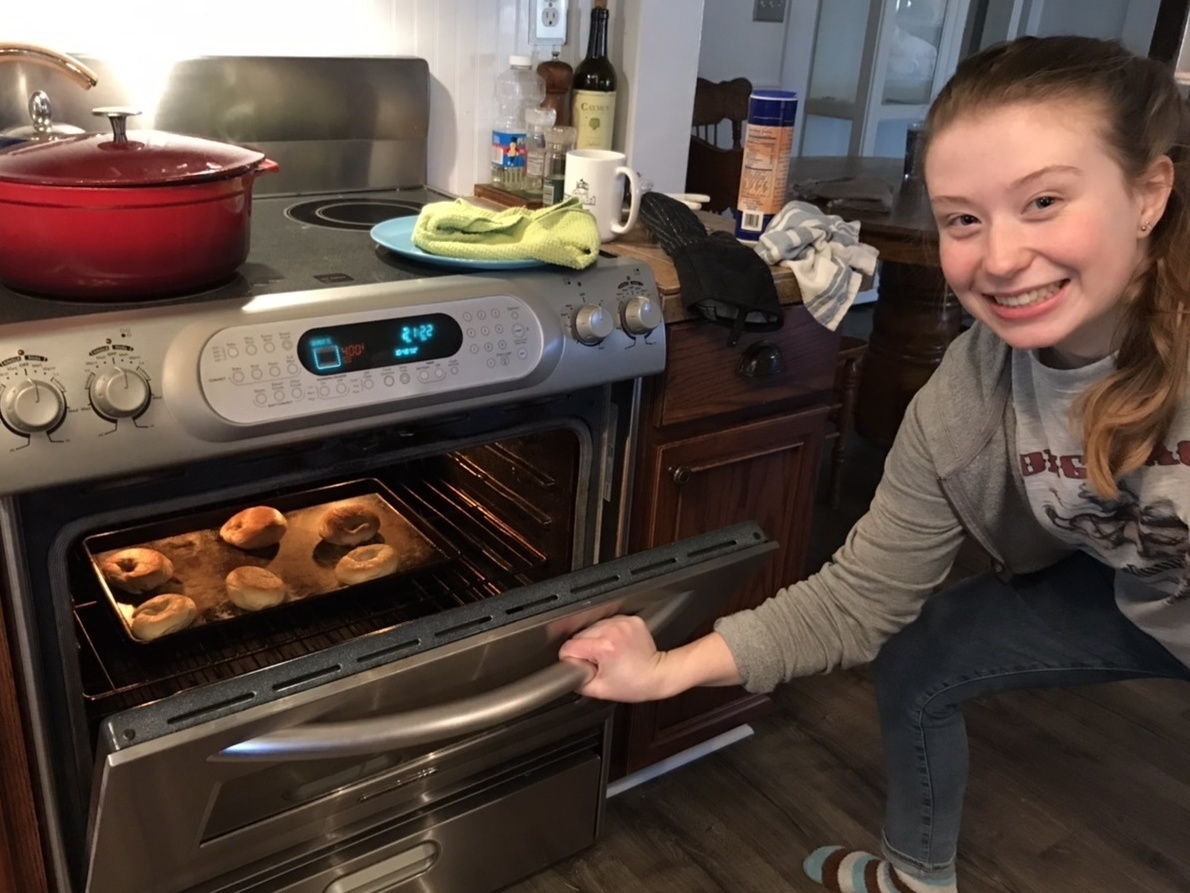 Kelley Jorgensen's 16-year-old daughter made bagels from scratch because the store ran out of them.

Some people are filling their days by cooking and baking with their families when they can't find what they want in a store.

Kelley Jorgensen, her husband, and her two daughters live on a farm in Ridgefield, Wash. One of her daughters wanted bagels, but the store ran out.

"So this morning she found a recipe and made bagels from scratch for the first time. They were very good if a little oddly shaped," Jorgensen says.

While some people are spending time in the kitchen, Bob Hemler and his family created a makeshift 5K run.

Hemler and his family were registered for a St. Patrick's Day race in Baltimore, Md., but the race was canceled because of the coronavirus. Instead, Hemler measured a 5K course starting at his house in Ellicott City so the family could still enjoy the event they were looking forward to. At the end of the race, each family member recieved a medal made by Hemler's wife, Trish. 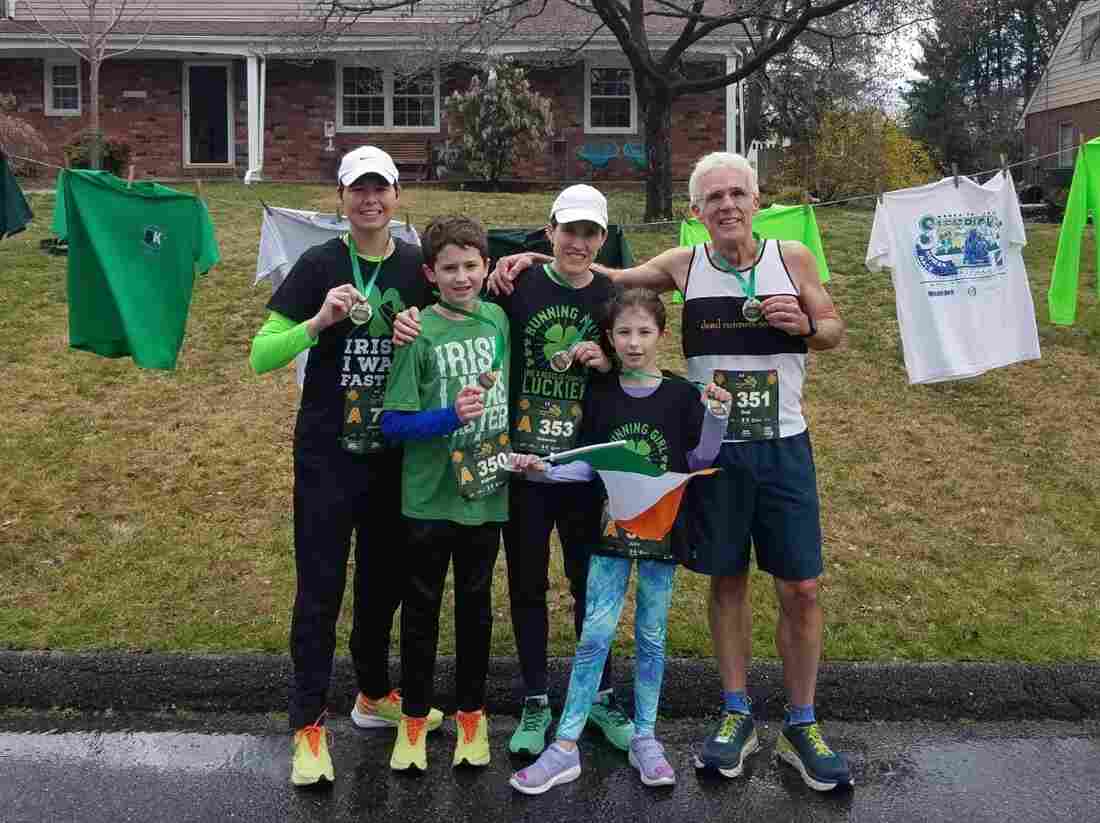 Bob Hemler created a 5K race outside his home for him and his family to run. Trish Hemler hide caption 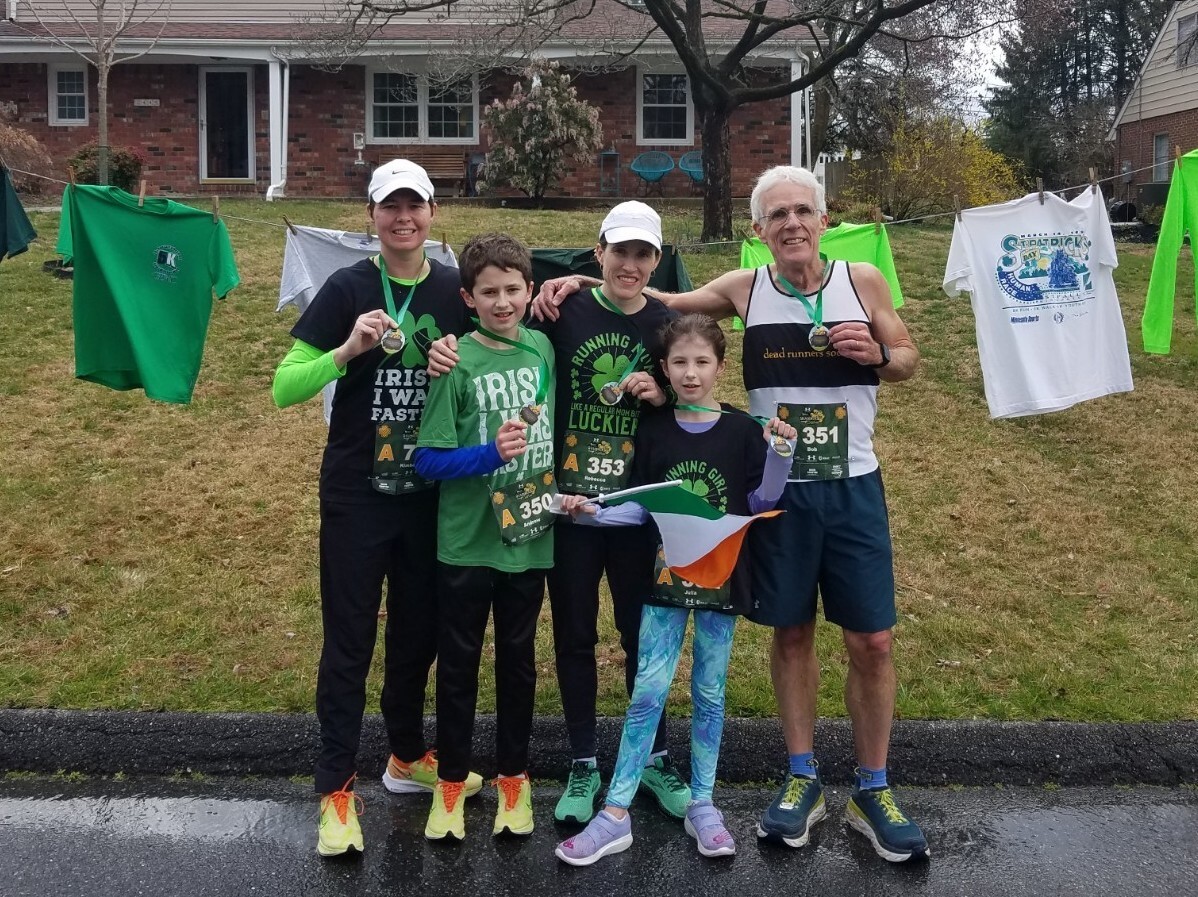 Bob Hemler created a 5K race outside his home for him and his family to run.

"Five of us were registered and my 8-year-old granddaughter, Julia, was the most disappointed as she hoped to win her age group," he says. "The younger runners did show respect for my age by leaving me a good social distance behind them."

Like Hemler, Mary Brems and her family have also found new ways to bond with one another. Brems lives in Phoenix, Ariz. In January, she started selling vintage clothes online. Her daughter Makella is home from college after it closed due to the coronavirus. Now, Makella is modeling all the clothes.

"My husband is an artist, so he is painting the backdrops for our vintage photoshoots," she says. "All this while sipping homemade iced tea and listening to vinyl records we found at a neighborhood rummage sale before everything was shut down." 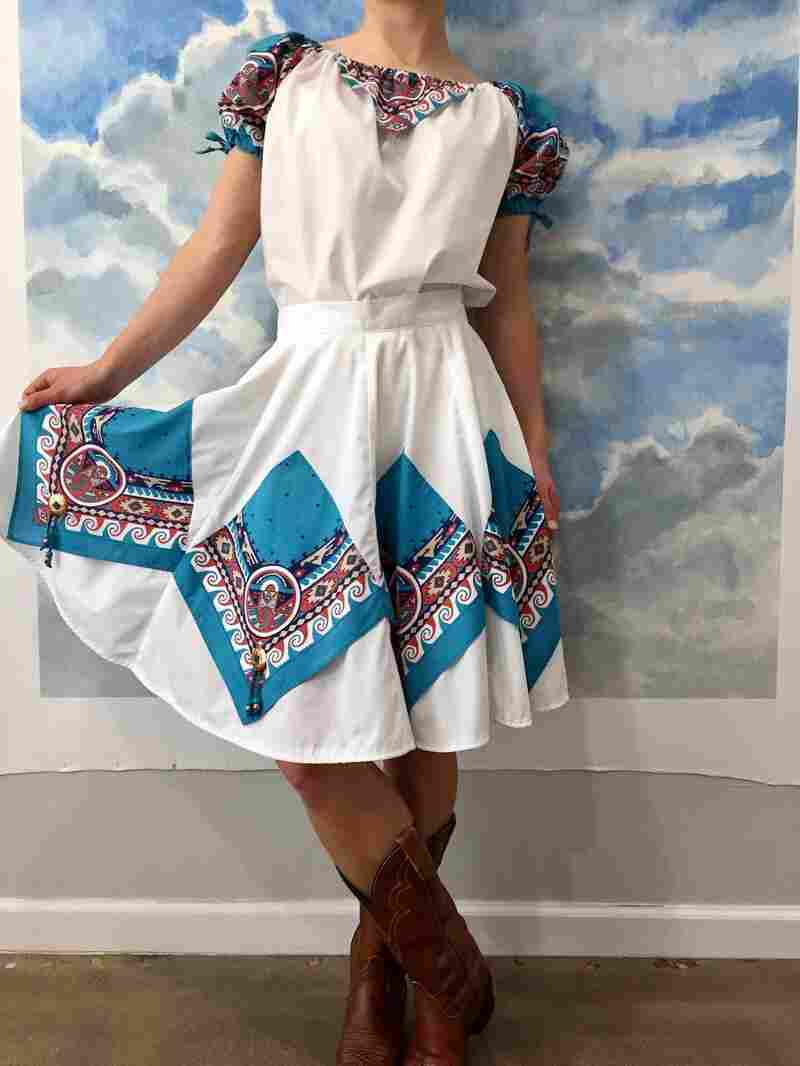 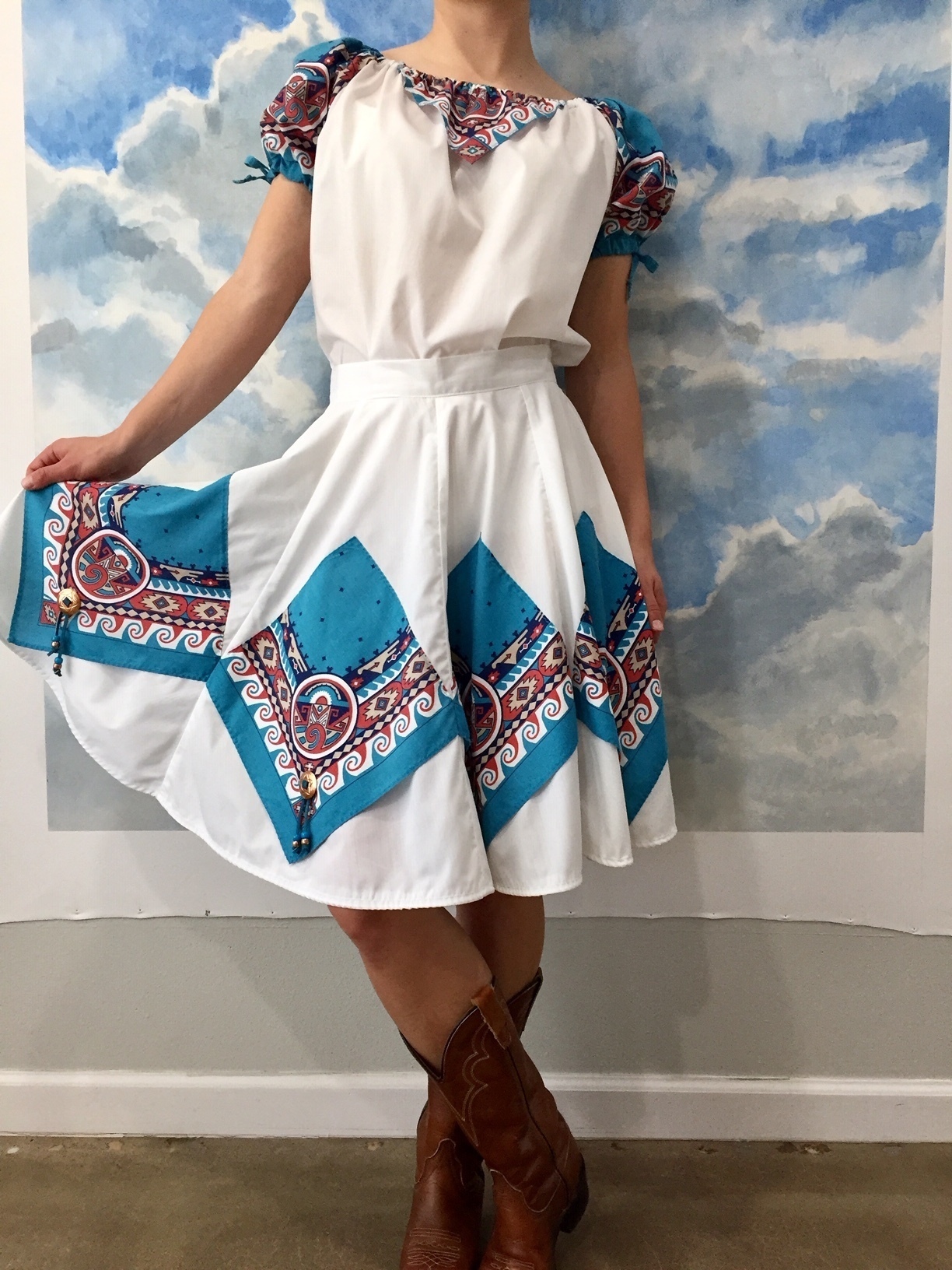 Kelly Wu is also home from college and will finish her sophomore year online at her house in Madison, Wis. She studies chemical engineering at Massachusetts Institute of Technology. She lived in the dorms and says that her floor had a close bond.

"Now that everyone has returned to their homes across the states, we wanted to find some way to keep some of our traditions up, so that we could still feel connected as a floor," she says. "One of these traditions is called the Question of the Day, where, normally, anyone who wants to can write a question on the whiteboard in our lounge for everyone else to answer throughout the day."

Wu's dorm floor representatives recreated a "Question of the Day" board online so that she and her classmates can stay in touch virtually.

Elena Yee, of Poughkeepsie, N.Y., is a clinical counselor at a liberal arts college. Even though most of the students at her school will be at home now, she is still expected to continue to provide services for them.

"As a result, I'm catching up on my reading of all my counseling magazines," she says. "I'm also fitting in fiction reading, which I normally don't have time for. As an introvert, I'm OK with being alone."

Despite being a homebody, Yee still wants some social interaction. She's been having video chat meetings with her colleagues and virtual lunch dates with her friends. 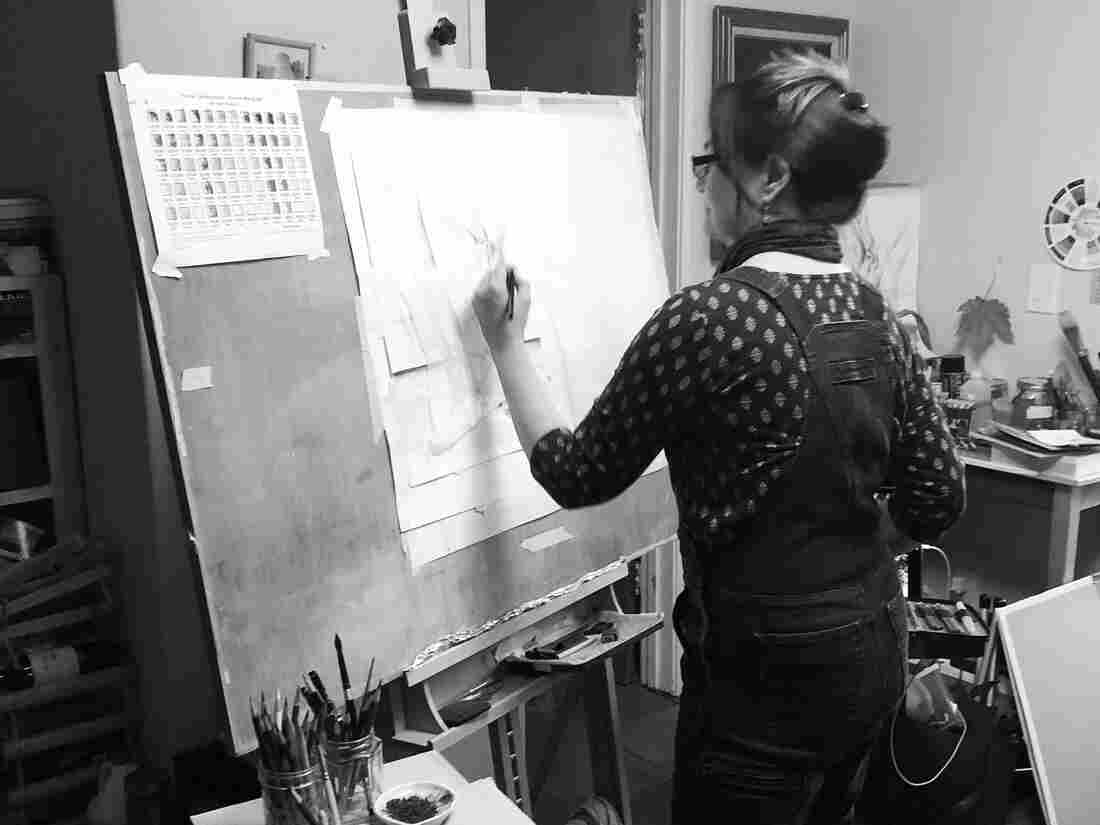 Patricia Larenas already worked from home as an artist, but misses getting together with her other artist friends. Nathan Schneider hide caption 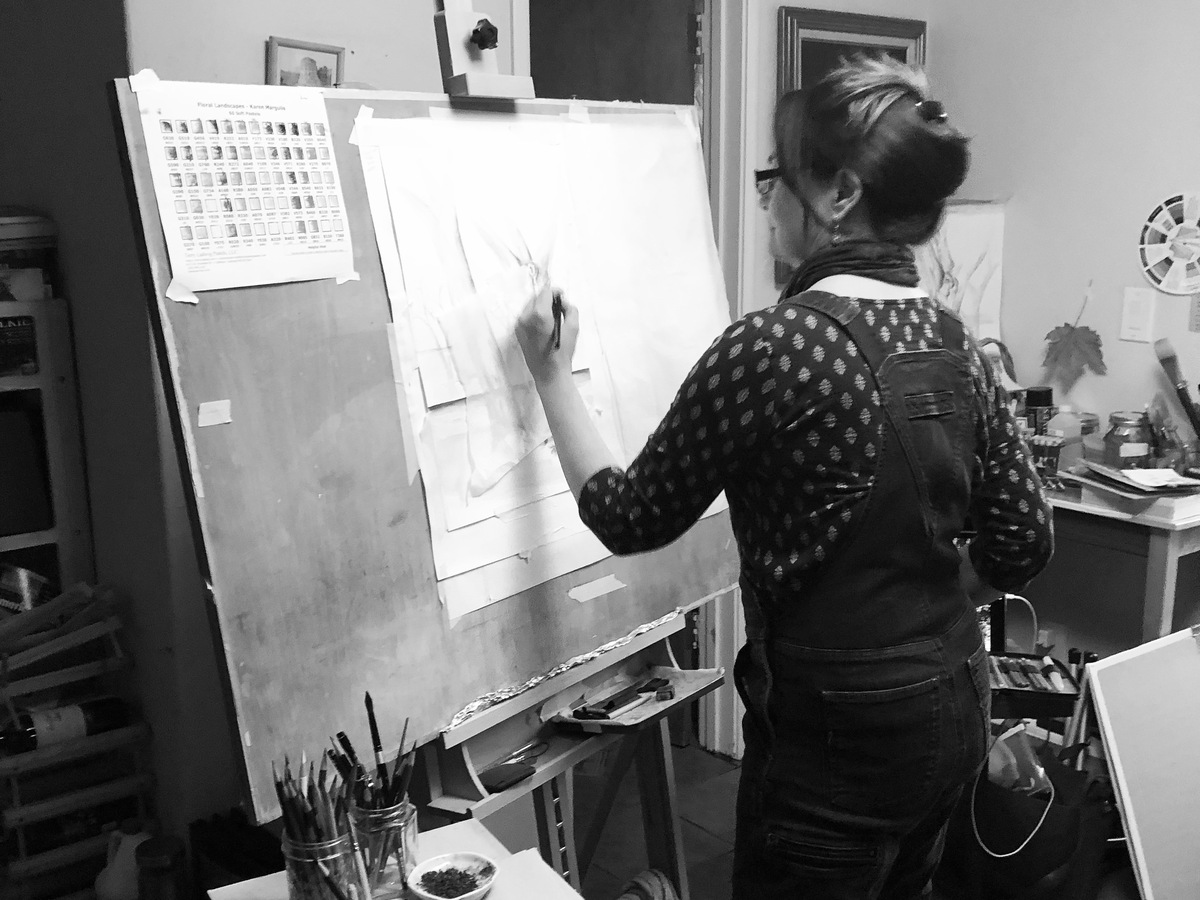 Patricia Larenas already worked from home as an artist, but misses getting together with her other artist friends.

Patricia Larenas is an artist and garden designer who works from home in Mountain View, Calif.

"Artists spend their time creating mostly in isolation, so we learn to embrace that however I'm already missing going out painting plein air with my artists friends," she says. "The more we can apply our patience and exercise our compassion for each other, the sooner we will get through this, and hopefully with the least amount of suffering and loss. All of us will find our worlds have changed when this is over."

Larenas is keeping in touch with other creative friends on social media. 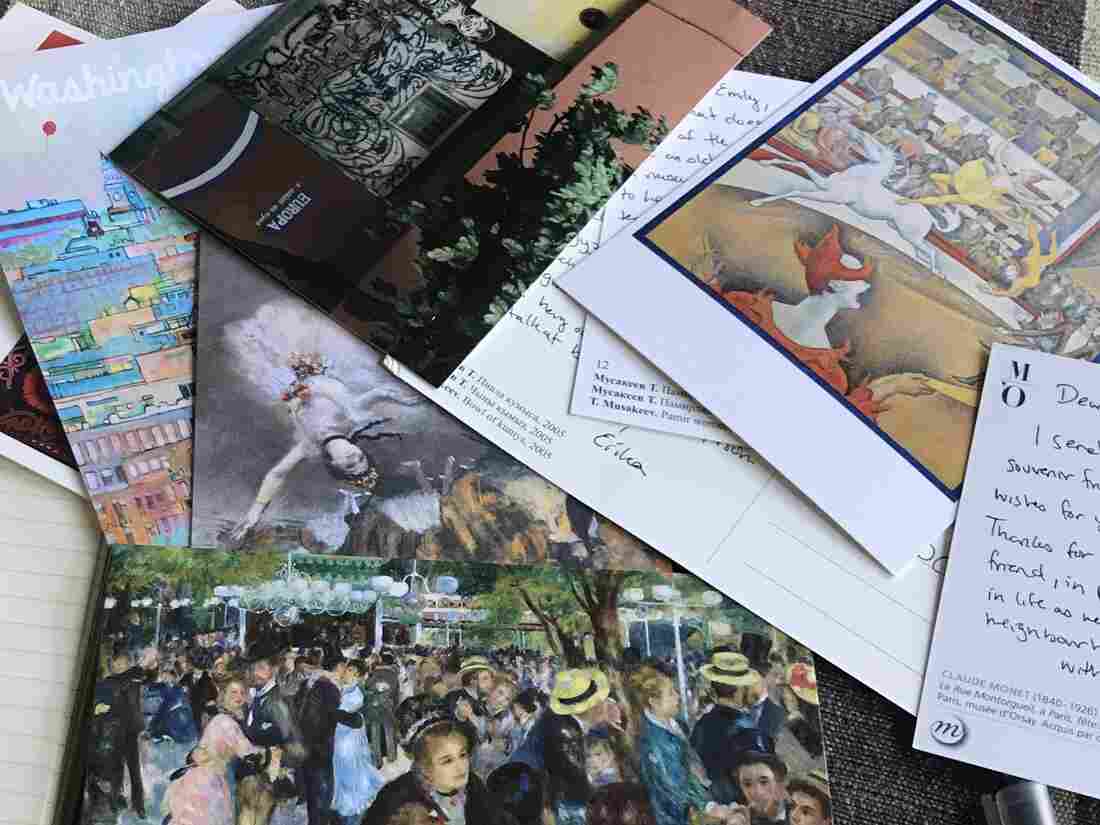 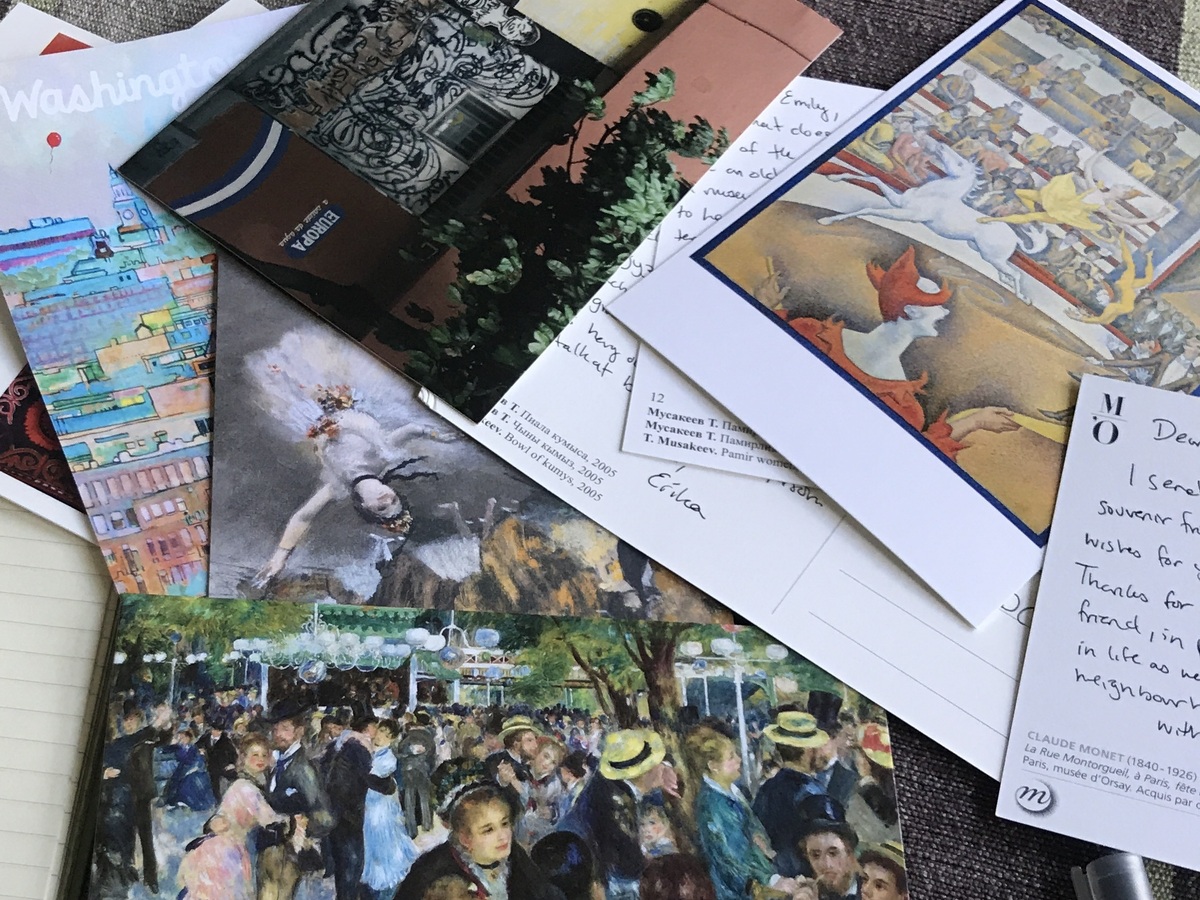 Erika Undeland is writing letters to her friends during social distancing.

But not all communication has to be done over the internet. Erika Undeland from Washington, D.C., has spent her social distancing time handwriting letters to her friends.

"I have always loved sentimental objects but I think that social distancing calls for intimacy through physical objects like mail," she says. "I find that mail has always been a wonder, especially now since it takes so much more effort than a text."

Some responses used in this story have been edited for clarity.

Brooklyn Riepma is an intern on NPR's National Desk.