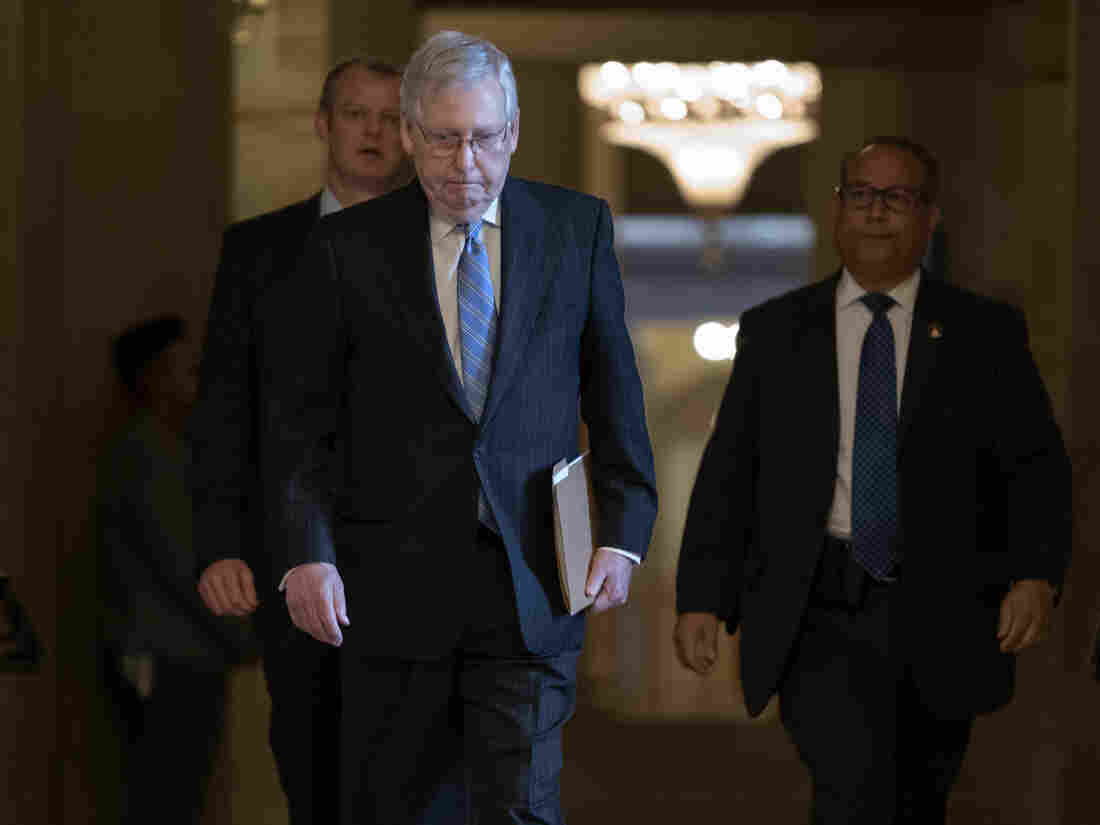 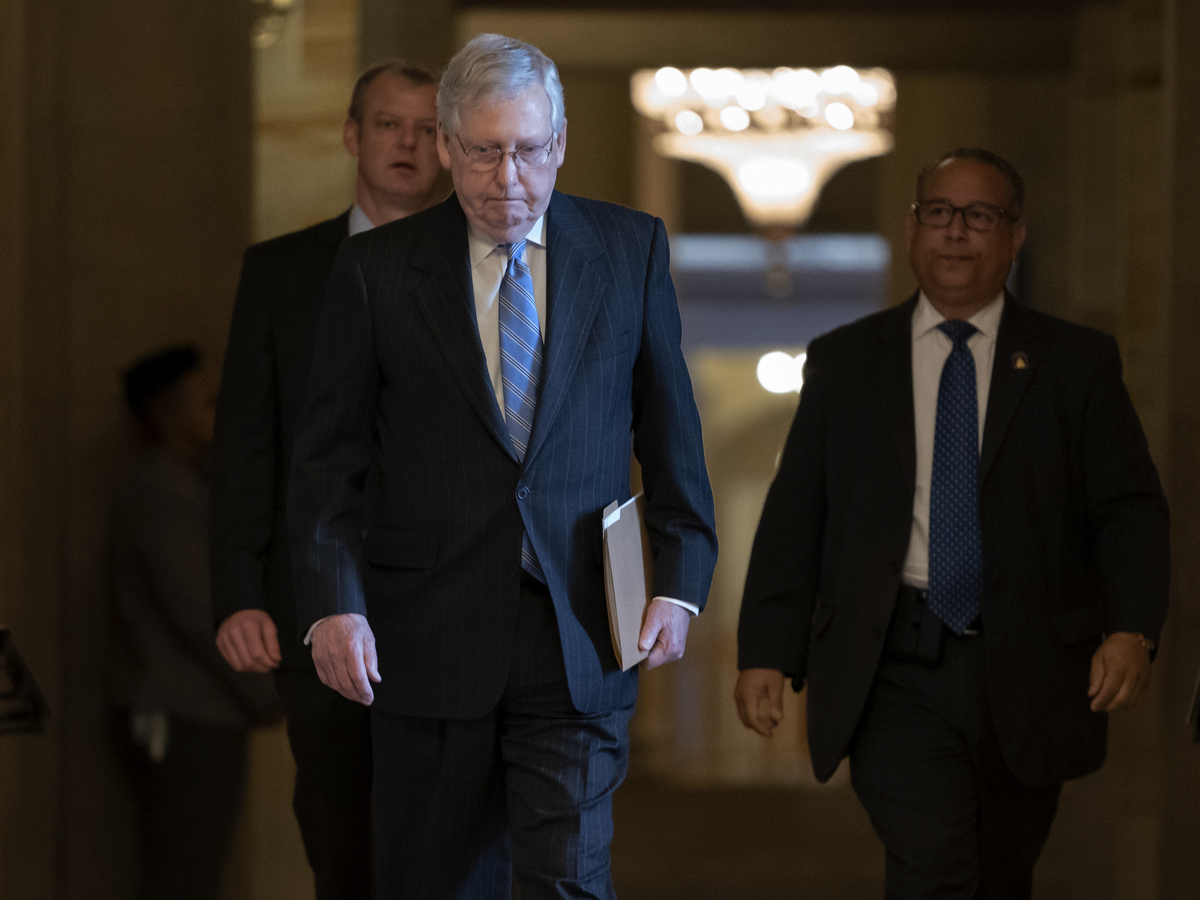 Senate Majority Leader Mitch McConnell, R-Ky., introduced legislation on Thursday to address the economic impact of the coronavirus. This is the third legislative package to deal with the outbreak.

The proposal was drafted by Senate Republicans and the Trump administration. The bill still needs to be negotiated with Senate Democrats, which McConnell said would happen Friday. Already some Democrats were criticizing the plan as too focused on help for corporations and were calling for major changes.

Here are some key provisions:

The bill includes cash payments of as much as $1,200 per person and $2,400 per married couple. Individuals with an adjusted gross income of less than $75,000, and $150,000 for joint filers, would receive the full payment. People earning over that amount would see their payments reduced by $5 for each $100 in income over that amount. The benefit completely phases out for individuals earning over $99,000 and married couples making more than $198,000.

Businesses with fewer than 500 employees could apply for fee-free loans of up to $10 million that could help cover payroll, employee salaries, mortgages, rent and some other debt obligations. Businesses that retain their employees and payroll levels between March 1, 2020, and June 30, 2020, would have any of that money used for payments on preexisting debt and payroll forgiven.

The bill includes $208 billion in loan guarantees for industries that are hurting because of the coronavirus. This includes up to $50 billion for airlines, $8 billion for cargo carriers and $150 billion for other unnamed businesses.

The bill would require the Food and Drug Administration to prioritize and expedite the review of new drugs. It also includes requirements that insurers pay for COVID-19 testing without a fee for patients; free coverage, without cost sharing, of certain vaccines as they become available; and $1.32 billion in additional funding for community health centers.

The legislation would move the tax-filing deadline from April 15 to July 15 for most filers.

The bill allows for people to defer payments on federal student loans and allows students whose universities have canceled classes to keep Pell Grants.

The bill: "We want to get something done quickly and boldly"

Senate Minority Leader Chuck Schumer complained that Democrats weren't involved in the drafting of the bill but said he wanted to work with Republicans to get something done quickly. In a statement on Thursday evening, Schumer and House Speaker Nancy Pelosi said that to earn their support, any economic stimulus proposal "must include new, strong and strict provisions that prioritize and protect workers, such as banning the recipient companies from buying back stock, rewarding executives, and laying off workers."

Other Democrats have begun highlighting areas that they say fall short. Sen. Patrick Leahy, D-Vt., the top Democrat on the Senate Appropriations Committee, said he is disappointed that the bill doesn't have sufficient funding for first responders and other front-line medical professionals, among other complaints.

"It inadequately funds federal, state, and local efforts on the ground to blunt the spread of this disease and prevent our health care system from being overwhelmed," Leahy said in a statement. "It fails to invest in programs the American people will rely on during this crisis, which have already begun to reach a breaking point."

Sen. Richard Blumenthal, D-Conn., criticized the airline-specific loans as a "blank check bailout" that lacks protections for workers and consumers.

"This proposal totally fails to prevent the corporate excesses and abuses that followed past taxpayer bailouts," Blumenthal said in a statement. "Instead of corporate welfare, there should be grants and loan forgiveness for small businesses, which are the job creating backbone of our economy."

Democrats will have an opportunity to make changes to the bill in the coming days. Several lawmakers have said they hope to pass a final bill by the end of next week.

McConnell had been in close contact with Treasury Secretary Steven Mnuchin in recent days as they rushed to draft a bill that reflects a GOP-wide consensus. McConnell now says talks with Schumer will start on Friday.

"As soon as Congress passes this, we'd get this out within three weeks," Mnuchin said. "Six weeks later, if the president still has a national emergency, we will deliver another $3,000 [for a family of four]."

Mnuchin said the plan also includes $300 billion for small-business loans. The loans are intended to be used for hiring and maintaining payroll and could be forgiven down the line.

McConnell spoke about the bill on the Senate floor on Thursday before the draft was released. He said the legislation would include billions of dollars in forgivable federal loans for small businesses.

"Owners will not be able to use the funds to give themselves raises or increase their own profits," McConnell said. "The point is to help small businesses endure, help workers keep their jobs and help workers and businesses emerge from this ready to thrive."

Industry-specific aid, including money for airlines, would be in the form of "targeted lending," which McConnell described as government loans.

"Just like small businesses, entire sectors are being crushed by public health guidance, which is obviously no fault of their own," McConnell said. "We are talking about loans that must be repaid."

He added that Congress will have future opportunities to address the long-term impact of the coronavirus crisis when it writes regular annual spending bills later in the year.

"The legislation I have just laid out will not be the last word," McConnell said. "This is not Congress' last chance to legislate, but it is critical that we move swiftly and boldly to begin to stabilize our economy."

Schumer acknowledged in an interview on NPR's Morning Edition that there is public pressure for lawmakers to set aside differences and pass a bill quickly.

"We don't want to be partisan — we just want to solve the problem," Schumer said. "We want to get something done quickly and boldly. That's a big job, but we have to do it because the crisis is even bigger."

But Schumer says Democrats have a number of additional requests, including a vast expansion of unemployment insurance benefits.

Democrats want to provide a major increase in the amount of money provided through the federal unemployment assistance program — perhaps as high as an equal match to the salary lost. Schumer is also calling for that program to be extended for many months, along with expansions to paid sick and family leave. The president signed a package Wednesday night that included a first round of paid sick and family leave as well as help for jobless Americans, but lawmakers in both parties acknowledged that a broader effort is needed as the economic impact continues to worsen.

The rapid developments come as lawmakers are growing increasingly concerned about the spread of the virus within the Capitol.

House Majority Leader Steny Hoyer, D-Md., informed members on Thursday that the House will not return to session until it is time to vote on a third coronavirus response bill.

"In light of the guidance issued by the CDC, we will be adjusting the House schedule. It is my intention that the House will not return to session until we are in a position to vote on the third piece of emergency legislation to respond to the economic impact of this crisis," Hoyer said in a letter to House Democrats.

Roughly nine lawmakers are under self-quarantine, and at least two have tested positive for COVID-19. While there is rising pressure among some rank-and-file members to allow remote voting, leaders have rejected those proposals.

Dozens of House lawmakers were already asking the chamber's leaders to allow remote voting before any members had tested positive. The effort was spearheaded by California Democratic Reps. Eric Swalwell and Katie Porter.

"Congress also should be no exception to the public health safeguards," they wrote in a March 18 letter to Pelosi and House Minority Leader Kevin McCarthy. "We are undermining our unified, bipartisan message to the American people when we come together on a crowded House floor to vote."

During a House chamber vote, more than 430 members and 100 staffers can be clustered on the floor, they said.

In all, 52 members signed the letter. Both Swalwell and Porter previously urged remote voting ahead of the health crisis, saying it should be an option to members regardless. However, the issue has taken on a new urgency with the coronavirus outbreak.

Hoyer acknowledged concerns about exposure in his letter to lawmakers and said he expected to adjust voting procedures. "No decisions have been made on exactly what these changes will be, but we will be discussing all options," he wrote.

Asked about members of Congress who had tested positive for the virus, President Trump said, "I know all of them" and said he hoped they all would recover. "It's one of those things," he said, noting that most people recover.

Congress would have to pass resolutions allowing remote voting, which would require either unanimous consent or an in-person vote. Either is a high bar, making the policy change unlikely at this moment.