Accessibility links
In Turkey, Coronavirus Spurs A Surge In Cologne Sales Sales of Turkish-made cologne are skyrocketing. Some colognes, made with 80% alcohol, are being embraced for disinfectant properties. Cologne is traditionally offered to house guests to rub on hands.

In Turkey, Coronavirus Spurs A Surge In Cologne Sales

In Turkey, Coronavirus Spurs A Surge In Cologne Sales 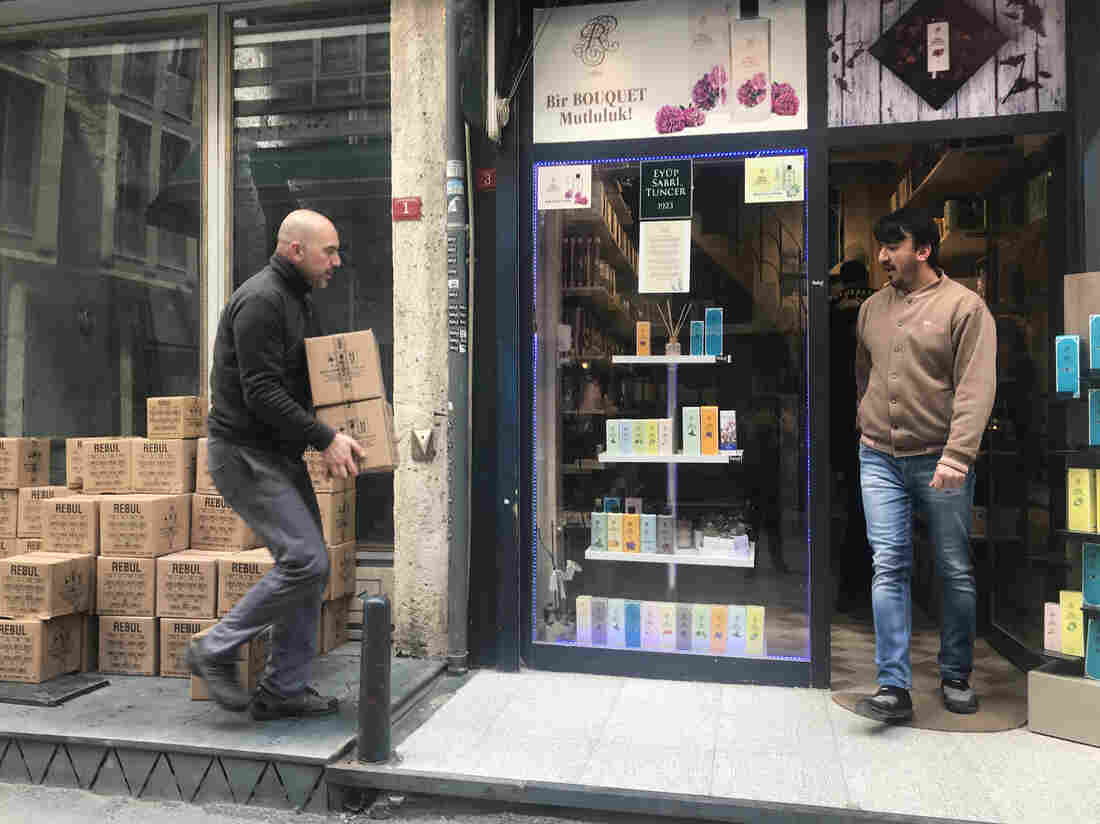 Shop owner Goksel Kaygin (left) and a colleague take in a new delivery of colognes to his shop in Istanbul, Turkey. Gokce Saracoglu for NPR hide caption

The coronavirus pandemic has shuttered shops and battered financial markets around the world. In Turkey, where COVID-19 has so far killed two people and infected nearly 200, schools, universities and many businesses are closed, and large gatherings such as Friday prayers at mosques have been suspended.

Even so, one sector is experiencing a boom. Sales of Turkish-made cologne are skyrocketing. And it's not because people are worried about how they smell.

At the tiny Atelier Rebul in Istanbul's Karakoy neighborhood, owner Goksel Kaygin, 44, deals with a steady stream of customers. They're squeezing into the narrow shop lined with a dizzying array of fragrances, ranging from lemon (sold out) and lime to green tea, spice and fig blossom, ranging from about $3 to $8 a bottle.

Rebul cologne, like some other Turkish brands, has long been made with 80% alcohol, and it's because of its disinfectant properties that sales are booming now. 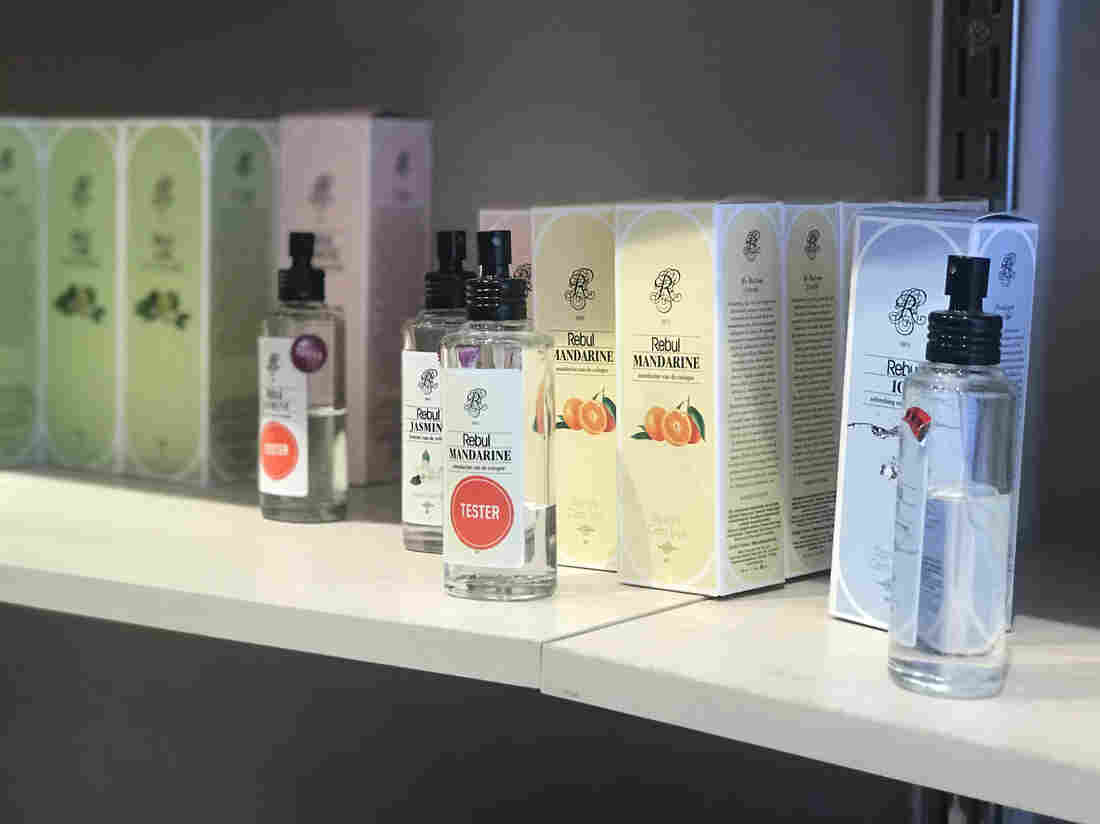 A display of Turkey's popular Rebul colognes in Istanbul. Cologne is in high demand because its 80% alcohol content helps it double as a disinfectant in the Turkish tradition of splashing hands when arriving at or leaving someone's home, a restaurant or elsewhere. Gokce Saracoglu for NPR hide caption

Kaygin says he's happy for the uptick in business, but not for the reason behind it. Reported coronavirus infections are climbing daily, with no sign they'll peak anytime soon despite optimistic predictions from some officials. Fears of the virus don't seem to be deterring his customers from crowding into his shop's small space.

"It's really busy, as you see, because of the virus," he says. "See those boxes coming, new supplies?" he asks, pointing to a stack of cartons just delivered outside. "But people are taking bottles even before we get them on the shelves."

An Ottoman symbol of hospitality

Kaygin dates the Turkish love of cologne to the later Ottoman period — the Rebul company has been in business since 1895, about three decades before the empire's end. Traditionally, a splash of cologne was offered to house guests and restaurant patrons to rub on their hands. In recent years, however, sales fell off. The younger generation just wasn't interested, he says.

"But now they understand that it's also a disinfectant," he says, "and they're coming in to buy, too."

In Ottoman times, Kaygin adds, cologne was a popular holiday gift, especially at the Eid holiday marking the end of the Muslim holy month of Ramadan. That tradition has continued.

"I used to buy this only for Eid," one of his customers says, "but now I'm back, yes, because it's also a disinfectant."

Kaygin stocks another brand as well, but because of its lower alcohol content, he says it's not selling nearly as well.

A boom beyond Turkey

Last week, the Turkish government halted the requirement to include ethanol in gasoline, boosting the capacity to produce colognes and disinfectants. Turkish media have suggested that traditional use of cologne on the hands before going out may have helped keep the number of infections in the country relatively low so far.

That remains pure speculation. Turkey, like everywhere else, officially urges hand washing to help protect against the coronavirus. President Recep Tayyip Erdogan's traditional way of greeting visitors and guests — avoiding a handshake by placing his hand on his chest and nodding — is also recommended by the media.

But there's no question cologne sales shot up as the virus began to spread. Turkey's state-run Anadolu News Agency reports a fivefold increase in demand.

Anadolu also reports Turkish cologne is also enjoying a spike in sales in Germany, where the threat risk from the coronavirus was recently raised from "moderate" to "high." Germany is home to some 3 million people of Turkish descent.

A cosmetics producer near Frankfurt told Anadolu he was having trouble meeting the soaring demand. He said his company had cut production on several other products to put all available resources into making cologne, working double shifts to turn out 12,000 bottles per day.

Back in Istanbul, shop owner Kaygin says one reason people quickly moved to stock up on cologne is because the tradition never completely died out. Cologne is still offered in a number of settings — to diners at Turkish restaurants, to patients and visitors at hospitals, and at the end of a visit to someone else's home.

"So they always knew about it," he says, "but now they really remember it."