Accessibility links
While Waiting Out The Pandemic, It's Worth A Watch Of These Classic Films In this time of fear and quarantining, critic Bob Mondello offers three classic movies worth revisiting — or watching for the first time. 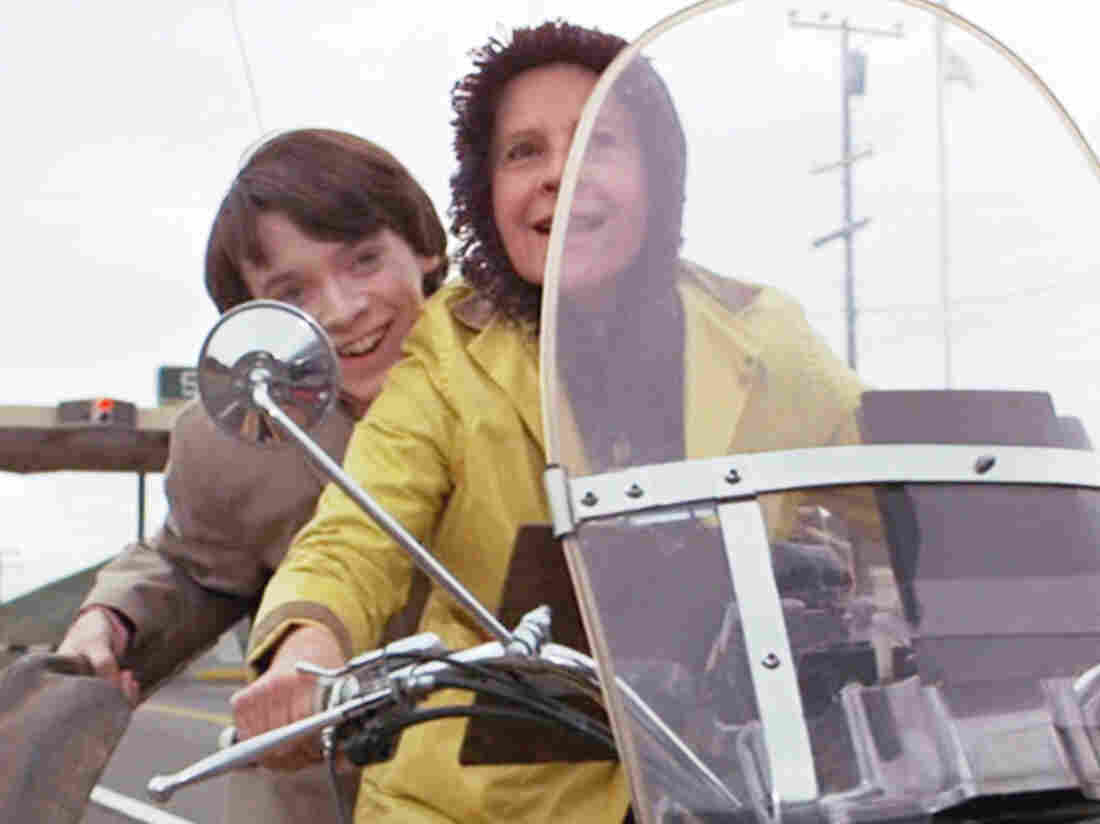 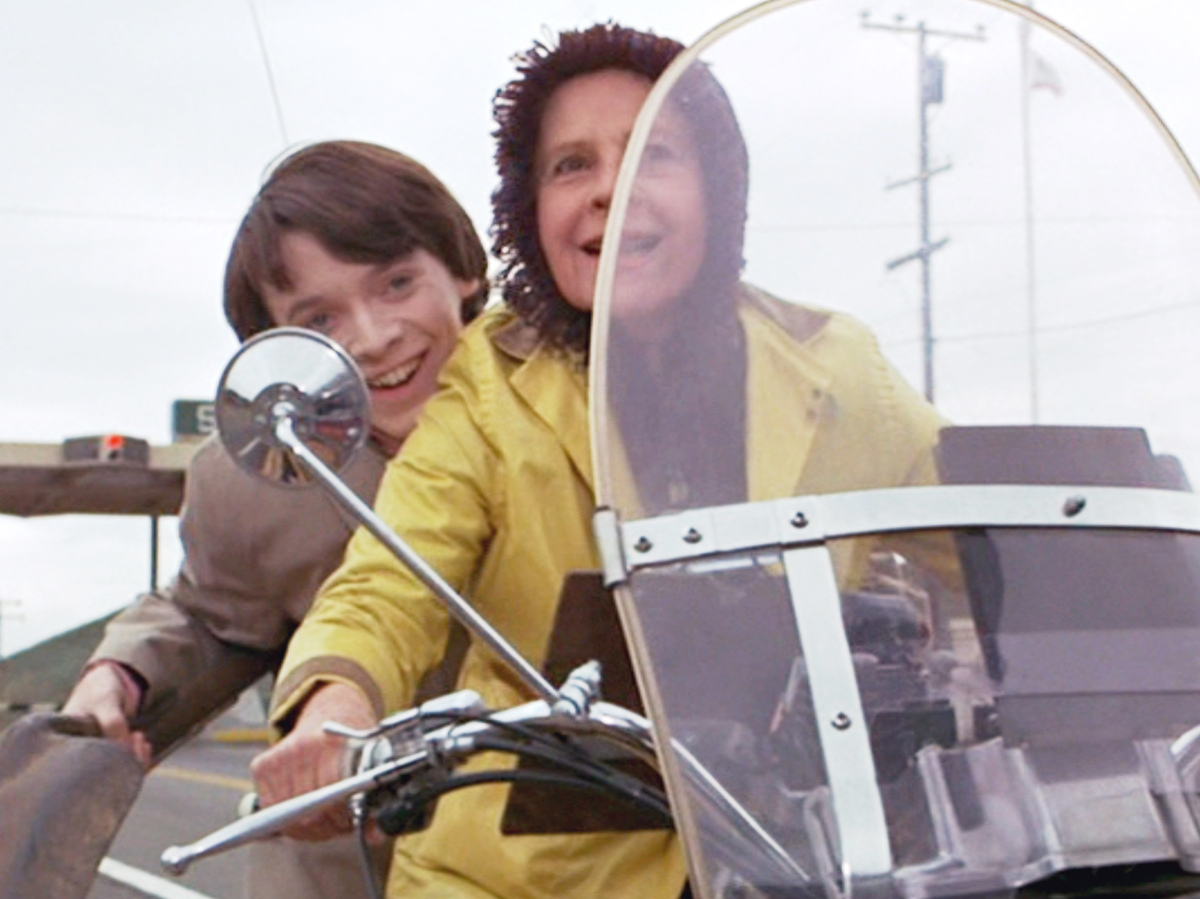 Critics are often asked "What's your favorite movie?" — and most of us have learned to deflect the question.

If you see a few hundred films a year, "favorite" is a moving target. Stiil, when pressed, I do have a ready answer: Buster Keaton's silent, Civil-War comedy The General.

The 1926 black and white epic takes its title from the name of the locomotive that is Buster's chief love in the film (apart from his fiancée). When his beloved General is stolen by Yankee spies — with the fiancée (Marion Mack) aboard — he gives chase in another locomotive, which leads to all kinds of crazy. 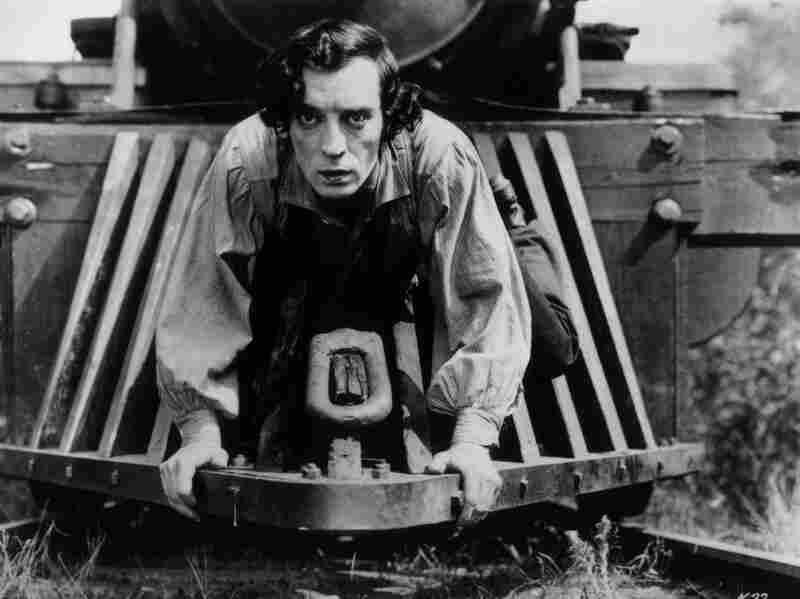 American actor Buster Keaton clinging to the front of a train in a still from the 1926 film, 'The General.' Hulton Archive/Getty Images hide caption 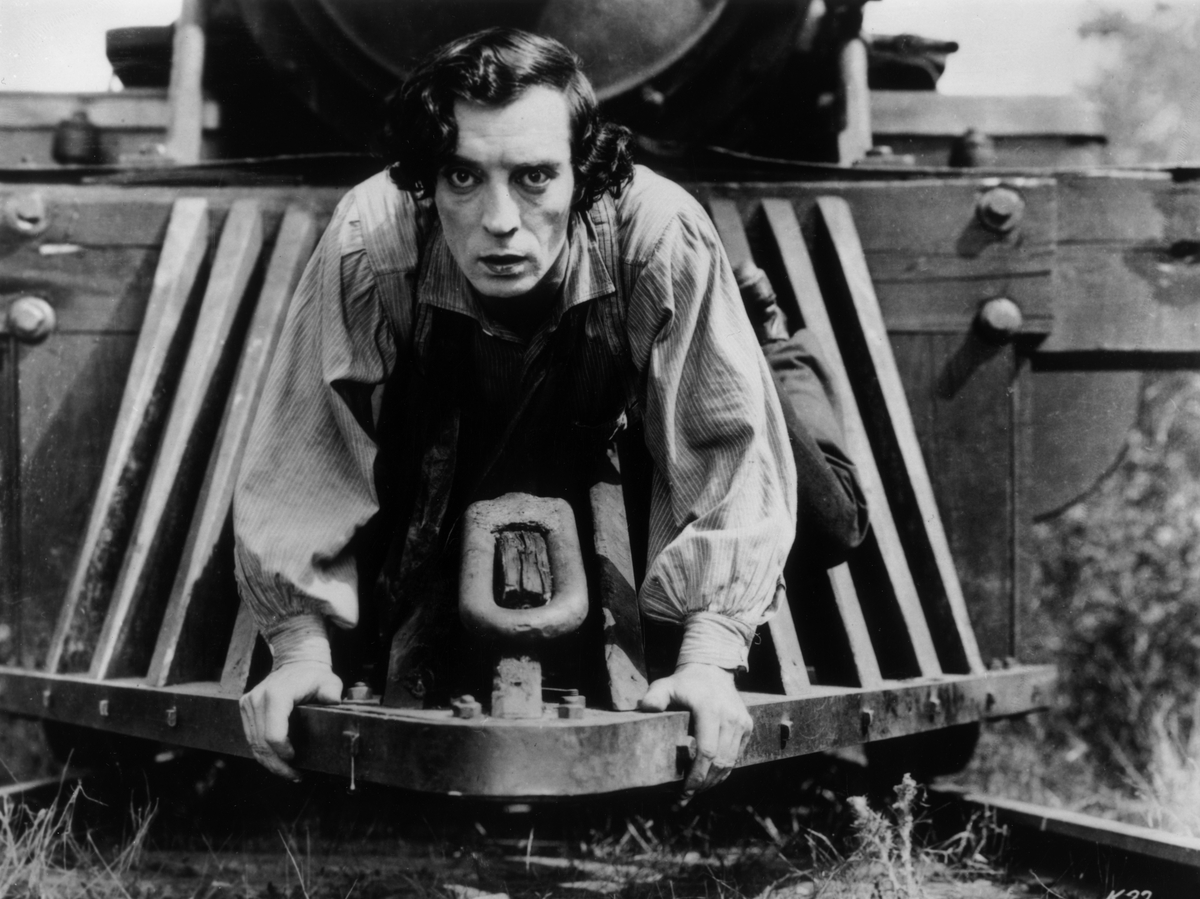 American actor Buster Keaton clinging to the front of a train in a still from the 1926 film, 'The General.'

Keaton's brilliance with physicality meant the film was crammed with acrobatic stunts, daredevil rescues, miracles of comic timing accomplished with full-size trains, including the single most spectacular shot in silent-film history — a bridge collapse that left a real steam locomotive lying deep in the Oregon gorge where the sequence was filmed. It stayed there for decades, becoming a minor tourist attraction until it was carved up for scrap metal during WWII.

Being silent, The General doesn't have a soundtrack, though its video release has three different orchestral scores. Still you can't beat the way I saw it with about a thousand fans in Salt Lake City a few years back. As a fundraising treat, NPR member station KUER had arranged for The General to be shown in the Capitol Theatre, a grand old movie palace built in the 1920s. And admission was at 1920s prices: 25 cents a ticket.

Organist Blaine Gale was at the keyboard of what Radio West host Doug Fabrizio referred to as "the Mighty Wurlitzer," Buster Keaton was on screen in a silvery, digitally restored print, and in no time, a thousand 21st-century moviegoers were shrieking with laughter. Stream it, and you'll see why.

The General was made 64 years after the real-life Civil War raid, the Great Locomotive Chase, it's based on. And 63 years after The General, Spike Lee made a ferocious comedy that deals with fallout from the Civil War.

In Do the Right Thing, Lee looked bluntly — and for much of the film, hilariously — at racial prejudice. In a story set in Brooklyn's Bedford Stuyvesant neighborhood, Lee plays Mookie, a pizza delivery guy who does not get along with his boss's racist son, Pino (John Turturo).

Pointing out that Pino's favorite basketball player is Magic Johnson, his favorite movie star is Eddie Murphy and his favorite rock star is Prince, Mookie wonders if Pino, "deep down inside," wishes he were black. When Pino snorts derisively, Mookie responds, "Laugh if you want to. Y'know your hair is kinkier than mine."

Tension in Do the Right Thing escalates as Lee, who wrote, directed, and produced it — in addition to starring in the film — tightens the screws between laughs. 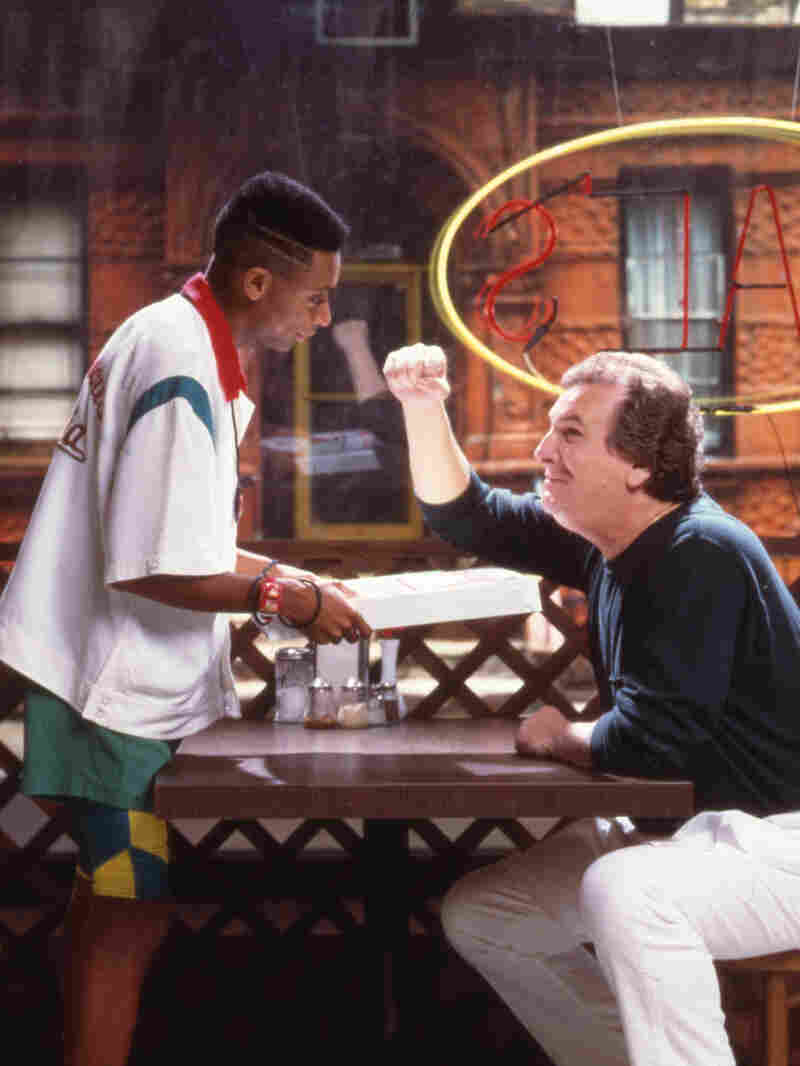 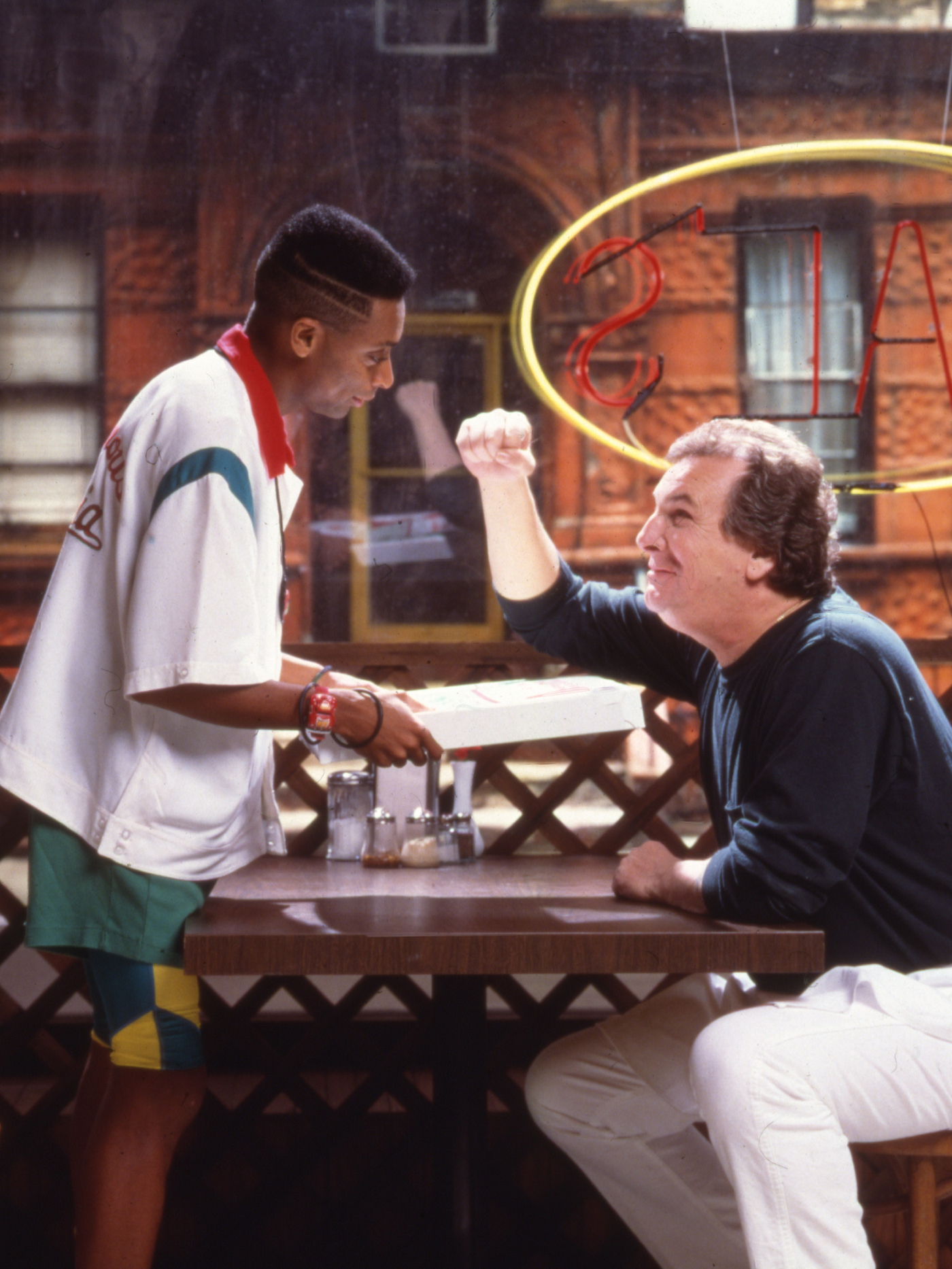 American film director and actor Spike Lee, left, and actor Danny Aiello on the set of their 1989 film 'Do the Right Thing.'

At the preview I attended in 1989, an African-American woman behind me spent much of the evening amen-ing the characters as if she were at church, and a white student nearby spent the evening seething at every "amen." At the climax of the film, he hissed at her to be quiet, starting an argument that only stopped because violence erupted onscreen.

A sharper mirror for Lee's point, I couldn't imagine then — still can't.

Lee's purpose here is to start conversations, not fights. I've seen Do the Right Thing quite a few times, and boy does it hold up.

But the film I've seen the most tackles difference differently. The comedy Harold and Maude is about age, not race, and involves a 19-year-old (Bud Cort) who's forever faking his own suicide (elaborately and to the immense annoyance of his unflappable mother), and an in-love-with-life 79-year-old (Ruth Gordon) whom he meets at a funeral.

The movie — perhaps the least likely romantic comedy of that decade — opened to mixed reviews at the tail end of 1971 and its flower-power message got lost in a Christmas crush that included 007 and Dirty Harry. By March it had closed nearly everywhere.

But at one theater in the midwest, Harold and Maud kept playing for more than a year. Other exhibitors, when they noticed, started bringing it back — at first for midnight shows, then for regular runs.

I worked as advertising director for a theater chain at the time, and when I told my boss I'd seen Harold and Maud 19 times (partly because I shared a birthday with Bud Cort) he booked it. I came up with an ad campaign that leaned heavily on the lyrics of the Yusuf (then Cat Stevens) song under the final credits: "If You Want to Be Free, Be Free" — and the odd little romance that initially couldn't seem to get out of its own way settled in for a nice long run.

Shortly after it opened, I had vacation time coming, so a friend and I grabbed backpacks, bought Eurail passes, and headed for a brisk three-week tour of European capitals.

In Vienna, we saw an ad for a stage production called Harold Und Maude. Couldn't resist that. The staging of the suicides on the proscenium stage of the Theater An Der Wien was quite clever.

A week later in Paris we found a theater playing Harold Et Maude with the great French actress Madeleine Renaud as Maude. It was on a thrust stage this time, which meant the suicides had to be done entirely differently.

Though neither production was performed in English, the message of looking past differences and learning to love life came through loud and clear. It never got old, as it were — though I did.

When I first saw the movie I was roughly Harold's age. Now, I'm approaching Maude's. Must've internalized something from the movie, because I'm not the least bit unhappy about that.