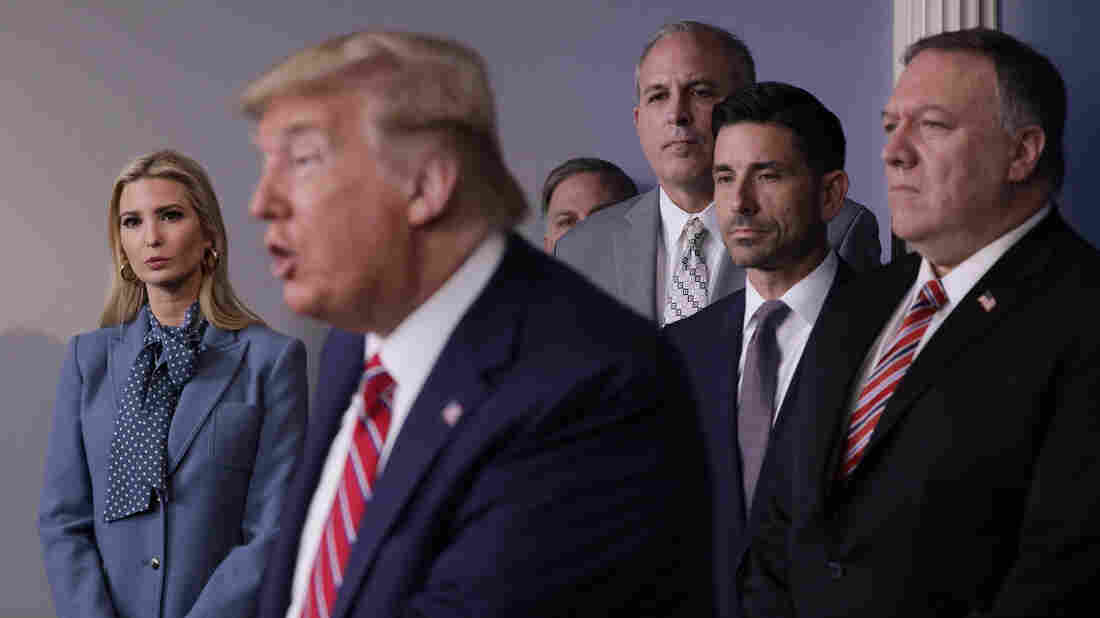 Flanked by members of the coronavirus task force, President Trump speaks during a briefing on the latest development of the coronavirus outbreak in the James Brady Briefing Room at the White House on Friday. Alex Wong/Getty Images hide caption The White House sought to show that it's in control of the sprawling coronavirus crisis on Friday even as it acknowledged enduring shortfalls in key supplies.

Administration officials also said they're imposing new controls on travel and restricting passage through the northern border with Canada and the southern border with Mexico following agreements with those governments.

Here were some key points from the latest briefing.

Dr. Anthony Fauci, an immunologist and key member of the White House's pandemic response team, acknowledged on Friday that there aren't enough tests to respond to the demand.

"We are not there yet," he said — but he and the political leaders involved with managing the crisis tried to emphasize what they say is the progress being made.

President Trump and Vice President Pence both said Friday that what they called a "new system" is "almost fully in gear," as Trump put it, and that more testing capacity is coming.

Trump repeated that he didn't believe every American needed to be tested for the coronavirus, especially people who are feeling well.

And the president and Fauci rejected an idea about what might be possible if there were sufficient tests — for example, whether public health authorities might be able to screen more strategically and not disrupt so many Americans' lives as badly as they have been amid the outbreak.

Under this theory, it wouldn't be necessary to ask everyone to stay home and for businesses to close because there would be less guesswork involved with who might be carrying the virus.

"I don't connect the dots there," Fauci said. "Testing is important. It would be nice to know. But let's not conflate testing with these actions."

Even if authorities could test everyone to assess with better fidelity where the virus is concentrated, mitigation and social distancing still likely would be necessary, he said.

Trump said Friday that he had begun to use his power under a Cold War-era law to direct the production of protective equipment, especially masks, and other medical devices to respond to shortfalls across the country.

"It's probably more masks ... the states are having a hard time getting them ... the act is very good for getting things like this," Trump said. "They will be here soon. We're having them shipped directly to states."

Trump also said General Motors might become involved with retooling its automotive production lines in such a way to produce ventilators, but those details weren't clear. The president suggested other manufacturers were involved, too.

Trump also said that negotiations continue with members of Congress about what more stimulus the government can provide for an economy seizing up from business closures and social distancing. Many Americans' lives have been disrupted, and millions could be out of work.

Trump said he had spoken with Senate Minority Leader Chuck Schumer, D-N.Y., on Friday, but the parameters of the forthcoming legislation aren't yet clear.

Secretary of State Mike Pompeo said on Friday that partial border restrictions agreed to earlier this week with Canada would take effect at midnight and a similar arrangement would be in effect on the border with Mexico.

Pompeo and acting Homeland Security Secretary Chad Wolf said the restrictions would permit the continued flow of commerce and some travel but aim to curtail as many of what they called nonessential crossings as practical.

Dr. Deborah Birx, the White House's pandemic response coordinator, told reporters on Friday that she had noted that men appear to be dying in greater numbers than women who've been afflicted by the coronavirus.

Birx said that underscored the need to continue to protect the most vulnerable populations, including those in nursing homes, and more broadly for all Americans to keep up the mitigation procedures that have disrupted life across the nation.

"When you see the sacrifices Americans have made, the sacrifices the service industry has made so the spread is discontinued, you really understand how important it is for all of Americans to make the same sacrifice," Birx said.

She continued to urge people who are feeling sick to stay home and to avoid groups of more than 10 people. Officials also encourage frequent hand-washing to disrupt the spread of the virus.

Trump continued to talk up the prospective use of the anti-malaria drug hydroxychloroquine, which he has said he's optimistic about fielding as a treatment for coronavirus sufferers.

Public health officials are much cooler, however, and Fauci said on Friday that he wants to see clinical results before he endorses the uses of hydroxychloroquine or other drugs developed for other purposes to treat COVID-19.

Trump appeared irritated and said that he was just expressing his hope that it could be a big difference-maker: "What the hell do you have to lose?" he said.

Fauci sought to split the difference between the interpretations they gave.

"It might be effective," he said. "I'm not saying it isn't" — what remains important is to develop clinical evidence about its effectiveness, Fauci said.

Trump also said Friday that the Department of Education would not enforce required standardized testing for students in elementary and high school.

That should result in less complexity for schools and students that have been badly disrupted by the coronavirus pandemic, officials hope. Trump also reiterated that he had used his authority to suspend student loan interest payments for two months.

Health care facilities across the country have reported shortages of supplies as seemingly simple as swabs in addition to protective gear and ventilators.

On Thursday, Trump and Pence teleconferenced with governors from the Federal Emergency Management Agency headquarters, a day after Trump signed "Phase 2" of coronavirus relief measures.

Pence addressed concerns over supply shortages, saying, "President Trump has been engaging industry leaders in the supply chain across the country to make sure that personal protective equipment and medical supplies are broadly available."

He said officials have identified tens of thousands of ventilators, including some that can be converted to treat coronavirus patients. The vice president instructed governors to take inventory of medical supply needs and check on their supply chains.

South Dakota Gov. Kristi Noem voiced concerns that her state may be overlooked because it is smaller.

She said that her state lab had run out of reagent supplies needed for testing and that the Centers for Disease Control and Prevention had pushed for her state to order through commercial suppliers that were canceling orders. She said that in one case, a hospital received reagents even though it wasn't equipped to run tests for the coronavirus.

Health and Human Services Secretary Alex Azar instructed her to get in touch with her regional FEMA director and said he would help her after the call.

Azar said on Friday that part of his struggles have involved with messaging to states and laboratories what is available to them without action by the federal government.

He told an anecdote about being contacted about the need for "swabs." He said his staff was able to "go out and find" and then send to states that need them.

"Usually it's that people don't understand there are lab supplies in the marketplace," Azar said.

Trump and White House officials defended the disruptions to life across the United States and the severe costs associated with the crisis.

Fauci said there was no moral way to look at the effects of the outbreak in China and Italy and then look at the United States and say, "Just let it rip." The right decision is to pursue the mitigation measures that are in effect, he argued.

Trump said it would take as many as two more weeks of mitigation and social distancing to see how well the precautions are working and then determine what to do next.

"We can bring our finances back very quickly," he said. "We can't bring the people back."