Accessibility links
Coronavirus Leads To Canceled Weddings For Many Couples Weddings in the era of coronavirus are, well, they're not happening. It's a disappointment for couples — and a financial loss to the planners, caterers and musicians who depend on weddings for income. 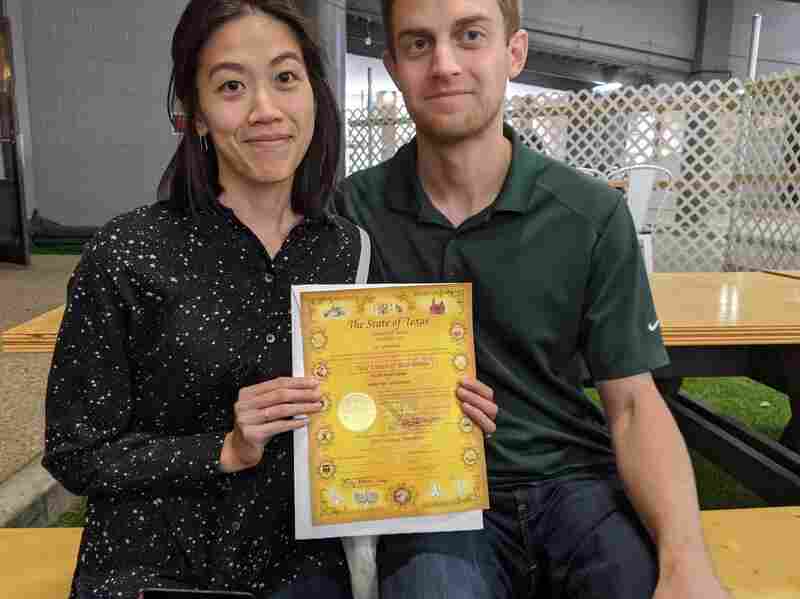 Thu Nguyen and Allen Gross were able to get their marriage license in San Antonio — but coronavirus restrictions have disrupted their wedding plans. Paul Flahive hide caption 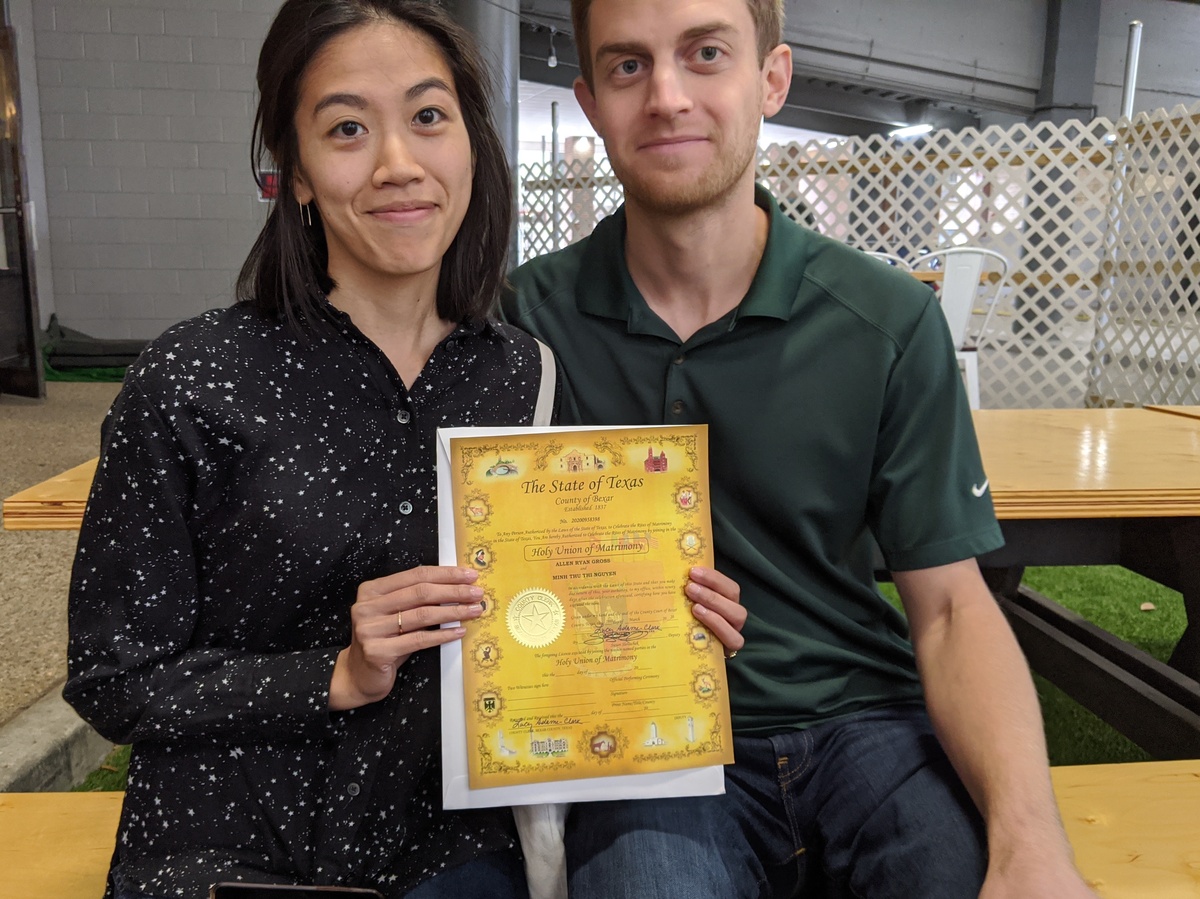 Thu Nguyen and Allen Gross were able to get their marriage license in San Antonio — but coronavirus restrictions have disrupted their wedding plans.

Cities across the U.S. are clamping down on large gatherings, and the CDC is recommending no more than 10 to a meeting — leading to disappointment for a lot of brides and grooms.

Thu Nguyen and Allen Gross stopped at the county courthouse in San Antonio on Monday to pick up their marriage license. I caught up with them right afterward and — given the current pandemic — stood as far away as my microphone would allow. They did get the license, but the moment isn't as happy as it could be.

"I admittedly almost cried when we got our marriage license, because I don't know whether or not it's going to happen," Nguyen says. Her mother lives in Houston, where Nguyen and Gross are scheduled to marry in two weeks in a Catholic ceremony. At each Mass, her mother has been monitoring how the church will handle the situation. "I talked to my mom last night" Nguyen says, "and she texted me this morning."

Most of their families would need to fly, and many members are elderly. Gross says they've already had 20 cancellations. "To be safe, we know we have a lot of people traveling — they have to get on the plane. And, you know, our elderly relatives too. So it's really about safety."

Nguyen and Gross had been planning for a year, but in the end, the decision was made for them. A few hours after their interview, the county barred gatherings larger than 10 people.

Meanwhile, Jessica Elizarraras and TJ Skrodzki are videoconferencing with their wedding planner, Jordan Maney, about next steps after they postponed their wedding.

Elizarraras answers, "I mean, it's hard because we don't know how long this is going to last. So we can say May, and if by April if it doesn't look any better, we're still in the same s***** boat." 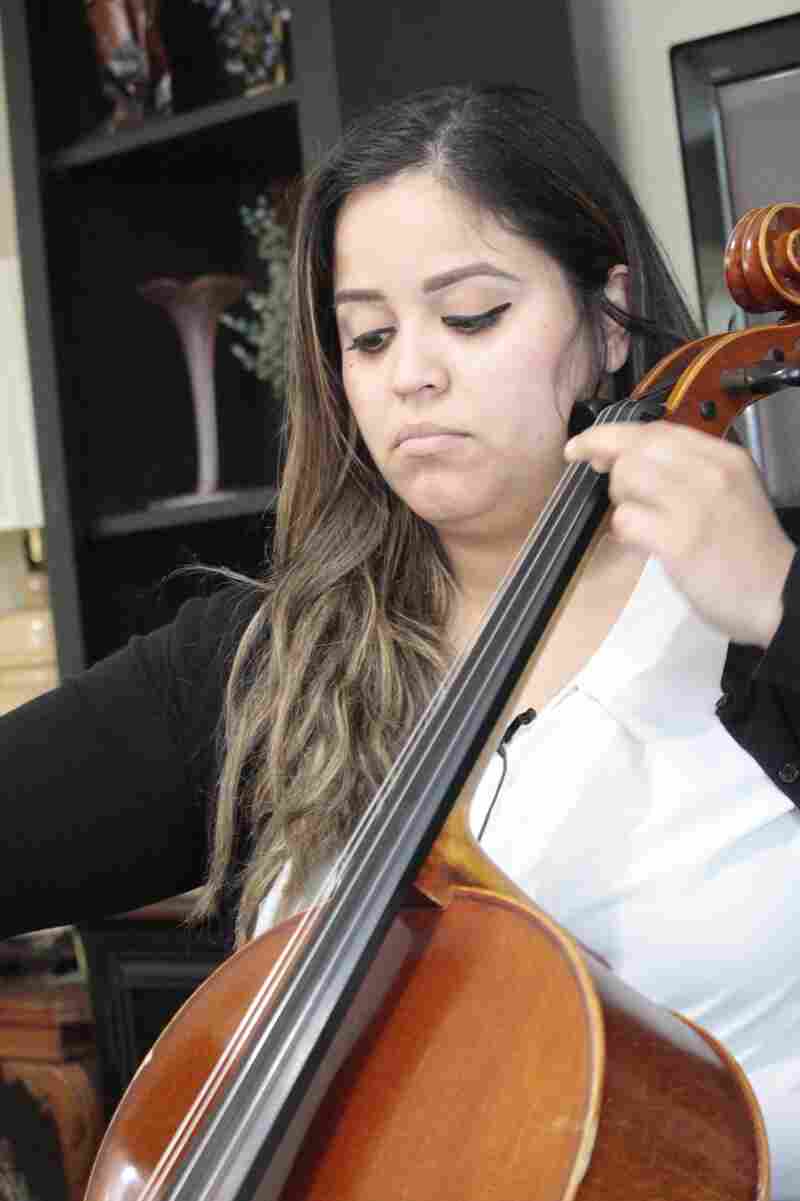 Cellist Christina Trongone gets much of her income from performing at weddings and from booking musicians for weddings. Paul Flahive hide caption

The couple may still lose deposits because of the rescheduling, but Maney says vendors are being flexible. There's the venue, florists, caterers, insurance, many other details to iron out. And to keep it in 2020, Elizarraras and Skrodzki may need to book on an off day like a Thursday or Friday. They aren't crazy about this idea, but in the end they just want to be married. They agree to reconnect with the wedding planner in a few days.

"That was a lot," Elizarraras groans.

"Glad we have a planner though," says Skrodzki.

"Can you imagine trying to call all the vendors ourselves?" Elizarraras asks. "In tears. No."

Cellist Christina Trongone is warming up for practice at her home in San Antonio. She's one of many depending in part on weddings for their livelihoods — she books musicians and performs at about 200 weddings a year. If this persists, it will hurt.

"Well, that can definitely be several hundreds of dollars lost. It's definitely troublesome, because that's money we use for paying bills."

Americans spent $54 billion on more than 2 million weddings last year. Those numbers are cratering in real time. Groom-to-be TJ Skrodzki struggles to keep perspective: "Obviously, we have to take care of everybody and we have to think of ourselves as a society, but it's hard to not be a little selfish about this event being canceled."

Weddings are not just about couples, of course. It's going to be a while before anyone — the planners, the musicians or the families — can get together to celebrate.

This story was edited for radio by Ted Robbins and adapted for the Web by Petra Mayer.