Accessibility links
With College Sports Shut Down, NCAA Hopes To Give Senior Athletes A 2nd Chance Student athletes normally are ineligible to continue playing after graduation. But with college careers cut short by the coronavirus, the NCAA may allow Division 1 seniors to play next year. 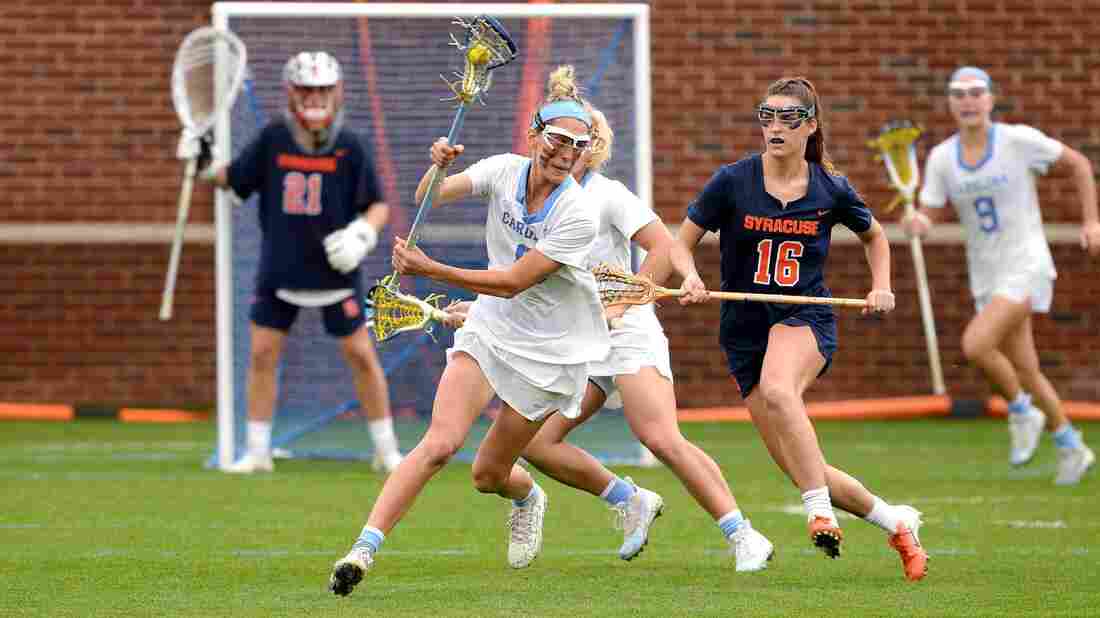 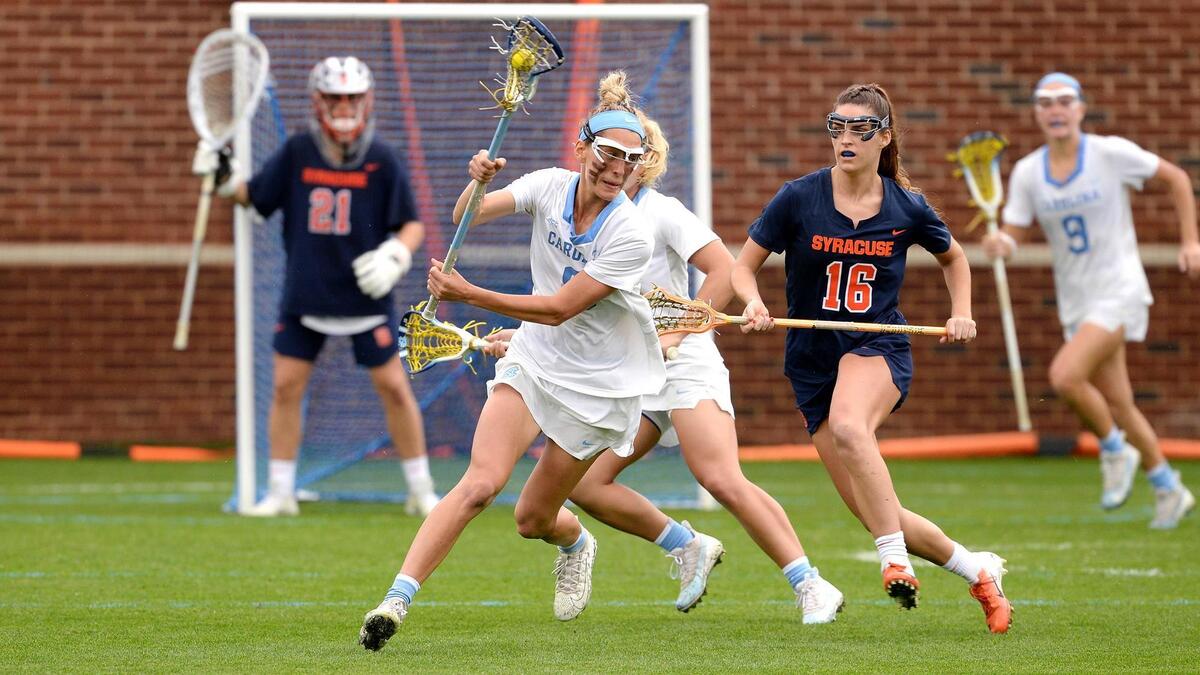 Attacker Katie Hoeg, center, is a senior on the University of North Carolina at Chapel Hill women's lacrosse team. She is hoping to continue playing for the Tarheels after graduating this spring.

Normally, right now, much of this country would be consumed by March Madness.

Of course, nothing is normal and college basketball was shut down like so many other parts of society because of the coronavirus outbreak. And it's not just the men's and women's Division 1 tournaments. Last week the NCAA shut down all winter and spring sports.

But there's a plan to give athletes another chance to finish college careers cut short.

Katie Hoeg dreamed about this season of lacrosse.

She is a senior attacker for the University of North Carolina women's team. This month, Hoeg became UNC's all-time leading scorer in a win over Northwestern. While she was proud of the record, it wasn't the dream. Winning a national championship was. It was a reasonable goal, considering North Carolina made it to the Division 1 women's lacrosse Final Four the last two seasons. This season, the number-one-ranked Tarheels were off to a good start. 6-0. Undefeated.

That's the day Hoeg and her teammates read the NCAA tweet announcing every sport was done.

"I was actually with a bunch of teammates," Hoeg says, "and we read it together." She says they wanted to be angry.

"We wanted to be angry at a specific person, or anything," Hoeg says, "But we knew there was nothing to be angry about. Like, this was completely out of our control. We have to do our part. We understand that the health of not only us and everyone around us, but this country, is the main priority. This obviously stinks for us and our season, but we completely understand."

Very quickly though, Hoeg says she thought about a different ending. One she could control.

"I was talking about it with another senior on my team and we [said], if we were given the chance to come back, would you come back? And we both looked at each other and we were, like, absolutely! There's no way we can just end it on these terms."

It supports so-called eligibility relief, and is discussing how to extend careers for Division 1 senior athletes in spring and winter sports too. Meaning all those basketball players currently missing out on March Madness.

Division 2 and 3 spring-sport athletes already have been granted relief.

Even NCAA critics applaud the moves.

"For the NCAA, having seen them dug in on so many other basic issues over the years, I think for this issue they've been relatively responsive," says Ramogi Huma, a longtime activist for college athlete rights.

Hammering out the details of that response will be challenging. It is why the NCAA hasn't yet formally announced its plan for Division 1 eligibility relief.

There's the thorny issue of money. As in, which schools could pay an extra year of athletic scholarships?

"If you start looking at the numbers of the incoming [athletes] who are going to get room and board," says Huma, "And the [athletes] allowed to stay another year, it could be a financial crunch for some of the colleges."

"Some won't miss a beat," he says, "but others probably would. Maybe it's time for some of the colleges with more money to step up and maybe make a pool of money available."

Another challenge is dealing with team roster limits.

More players potentially could be fighting for starting positions or playing time.

"That [issue] probably is not something we can deal with legislatively," Whitman added.

Indeed, coaches might be on their own having to wrestle with that team by team.

Huma says colleges and universities might want to draw on the model of high school sports.

"One possibility [for colleges] is thinking about having a JV team, along with a varsity team," Huma says, noting colleges usually have one team. "[This would guarantee] players have opportunities to actually compete. But those are tough decisions. It might be different from one school to the next."

Preparing for another chance

While the NCAA explores how to meet these challenges, senior athletes suddenly are contemplating their possible do-overs.

Some have post-graduate plans that might be hard to change. Katie Hoeg says she's lucky. She was planning a gap year before starting dental school, and with the job she'd lined up for the year — teaching and coaching lacrosse at a Tennessee high school — her employer supports her return to college.

"He was very kind and gracious and understanding of the whole situation," she says.

Hoeg says she has been on a full athletic scholarship at North Carolina, and is hoping that is extended along with her extra eligibility.

"That's definitely something I'll have to talk [about] with my parents," Hoeg says. "But we kind of said this has been my dream, this is something I've worked my whole life for, and that we're going to try to make it work no matter what their ruling [on scholarships] is."

For now, Hoeg is home with her family during the coronavirus outbreak. She's trying to stay inside as much as possible, "doing our part for the health of communities," she says.

But she is still training, with her three younger siblings, "like I'm about to play next week."

"We're fortunate enough to have some gym equipment in our basement," Hoeg says, "I also go for runs and [we] go to a local field to do lacrosse drills by ourselves. Our small group of three or four."

Preparing Hoeg for what she hopes is another chance at a dream season.