Accessibility links
Interview: Gene Luen Yang, Author Of 'Dragon Hoops' Yang's new graphic novel Dragon Hoops chronicles the year he spent following a high school basketball team in their quest for a title; he says he admires the courage it took to step onto the court. 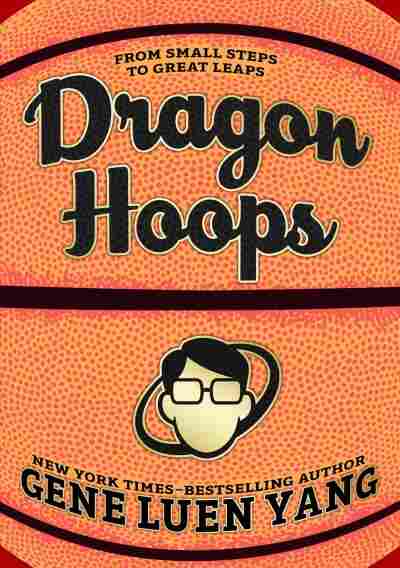 Gene Luen Yang is known as a cartoonist — the author of American Born Chinese and the New Super-Man comics, he's received a MacArthur genius grant for his work, and the Library of Congress named him as its Ambassador for Young People's Literature in 2016.

But for years, Yang was a computer science teacher at Bishop O'Dowd High School in Oakland, Calif., and his new book Dragon Hoops, chronicles a year he spent observing the school's incredibly talented basketball team as they strove for the state championship.

There are a lot of recurring motifs in the book, but the one that stands out to me is the idea of the first step. Throughout the book, people are taking important steps into new places.

Diversity Drives The Story In The Latest Incarnation Of Superman

During that season I watched these teenagers — the youngest kid on the team was 14 — step out onto that court in front of crowds of people. Two of the games were televised. The players knew that some of the most vivid memories of their lives would be made on that court. Some of those memories would make them proud and some of those memories would make them cringe. In the face of that uncertainty, they stepped out anyway. If I were in their situation at their age, I would have melted into a puddle of nerves and stomach pain.

And as I read about basketball history, I discovered that same theme of courage over and over again, that theme of stepping out into the unknown. That's kind of how it became a recurring motif in the book. Those panels showing characters taking steps are just a visual way of talking about courage.

You love superheroes — your avatar on the page wears Superman and Blue Beetle shirts, your work with DC on New Super-Man is part of the plot – and you make a lovely comparison between some of your favorite heroes and two of the players, Ivan and Paris.

Superheroes are about courage, too. When we read about Superman or Batman, we are reading about characters who face down great odds.

I definitely saw parallels between superhero stories and sports stories. Both feature protagonists who perform these amazing feats while wearing colorful uniforms. The big difference, though, is in a Superman or Batman story, we know from the first page who's going to win. In sports, that's just not the case. At tip-off, you have no idea what the outcome will be.

I feel like maybe there was a little [Understanding Comics author] Scott McCloud influence here, especially in the endnotes — am I right?

Oh, I am definitely influenced by Scott McCloud! And it's not just this book. I read Understanding Comics when I was in college. I'm not sure that I would be making comics right now had I not read that book at that time. His ideas made their way into my bones. I'm not even conscious of it anymore, but I definitely approach all of my comics with a McCloudian perspective. I especially admire Scott's ability to use the comics medium to teach. I've joked that when I grow up, I want to be the Asian American's Scott McCloud.

This book is very, very personal, which is a switch after Boxers & Saints. Why did you decide to go in this direction?

I didn't mean for this book to be so personal. When I started it, I was planning to focus solely on the coaches and the players. I wasn't going to be in the book at all.

But then I realized I had so many weaknesses as a storyteller. I am not an athlete. I didn't really know much about basketball. I didn't share the same background as some of the players and coaches. I'd just stumbled on this incredibly compelling story and I wanted to put it on paper.

At some point, I decided I had to be real about my weaknesses, and putting myself in as a character was the best way to do that.

Then as the season progressed, following this team began affecting my actual life, so my cartoon self began developing a narrative arc. That was definitely not a part of the plan in the beginning.

The Bishop O'Dowd Dragons obviously went on an important journey in the book — but so did you.

I've always wrestled with fear and anxiety, especially when it comes to doing new things. While I was following the team, DC Comics approached me with an offer to write Superman. For a lifelong comics nerd, this is a dream come true. You'd think I would jump at the chance. But I'd been offered the chance to write for mainstream comics before and I always turned it down because I really loved being a part of the Bishop O'Dowd community. I didn't really want to leave. Thinking about it made me anxious.

But then I watched this team of players and coaches step out in courage time and time again. In books about basketball history, I read about players in the past doing the same thing. I found them all inspiring.

So I ended up taking that opportunity to write Superman for DC Comics. My most personal project for DC actually comes out two months after Dragon Hoops. In May 2020, Superman Smashes the Klan will be released. It's written by me and drawn by Gurihiru. It's an adaptation of a classic Superman story from his 1940s radio show. In 1946, the Man of Steel defended a Chinese American family against a group of hooded white supremacists.

Are you still in touch with Coach Lou or any of the players?

I am still in touch with Lou and a couple of the players.

Lou and I talk on the phone maybe once a week and we text each other all the time. He and his team are having another outstanding season, the best since the season that I followed them.

I'm also in touch with Jeevin and Arinze. We text from time to time. I just went to watch Arinze play for UC Riverside this past December. He was so dominant, the highest scorer on the floor. It was super fun.