Accessibility links
Elderly Couple Uses FaceTime To Stay Connected During Coronavirus Pandemic An 88-year-old Vermont woman is using FaceTime each day with her 92-year-old husband because his nursing home has barred visitors due to the coronavirus pandemic. She worries he'll forget her. 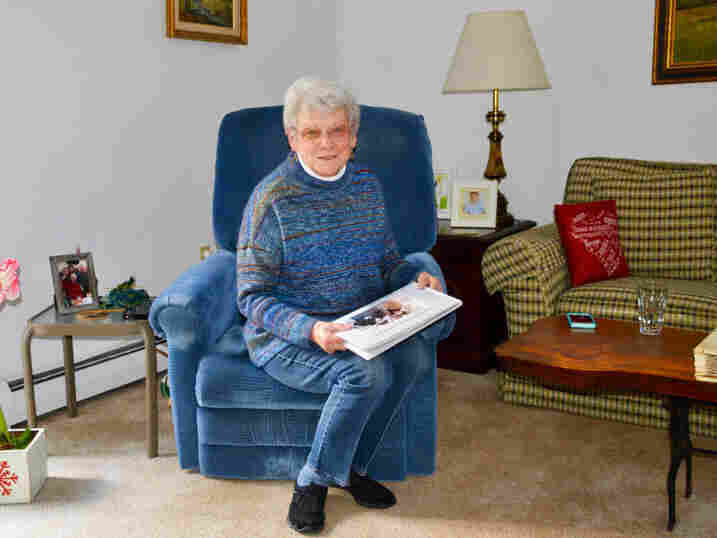 Marion Austin used to visit her husband John Austin every day at The Pines, a nursing home in Rutland, Vt. Now, the couple of nearly 70 years is keeping in touch via FaceTime. Nina Keck/VPR hide caption 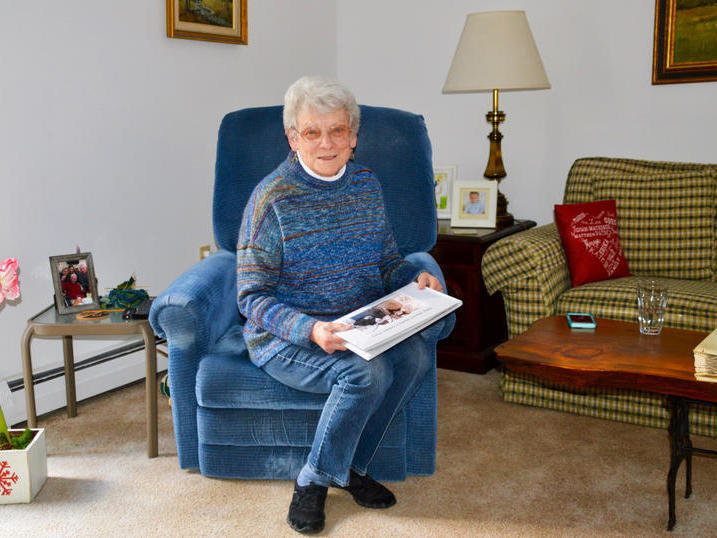 Marion Austin used to visit her husband John Austin every day at The Pines, a nursing home in Rutland, Vt. Now, the couple of nearly 70 years is keeping in touch via FaceTime.

With elderly populations especially vulnerable to the coronavirus, nursing homes and assisted living centers in Vermont have drastically limited access for visitors. For the Austins, a couple that began dating just after World War II, it's the first time they've been apart.

"He was 20 and I was 16 when we met in church," said Marion Austin, who sat on the couch in her Rutland living room last Friday and looked through old photo albums. "We were sitting in the balcony... and we kind of chatted up during the service, and then afterwards went out for a soda. It was probably six or eight months later that he asked me to go steady."

Marion is petite and lively, with short white hair and bright blue eyes. As she showed a photo from her and John's wedding, she said, "That was who he was around the time when I met him: Johnny Austin. He was so handsome."

The Austins moved to Vermont with their three children in 1969. Marion was a housewife and John was a home builder. When their kids were grown, Marion returned to school to get a master's degree in counseling psychology and went to work.

For his part, John kept building houses until he retired in his 60s. He stayed active by skiing and playing tennis, but Parkinson's disease and dementia slowly took their toll on him, and caring for him eventually became too much for Marion.

In July 2018, John checked into The Pines, a nursing home in Rutland. Marion began living by herself for the first time at age 86.

"Someone used the term 'ambiguous grieving' because you're grieving for someone who's still here," said Marion of caring for John through his dementia. "It was beginning a series of letting go: First of all, letting go by letting someone else take care of him — I still did his laundry. Then finally, I let go of that."

However, she couldn't let go of daily visits to see John, tell him she loved him and make sure he had whatever he needed. 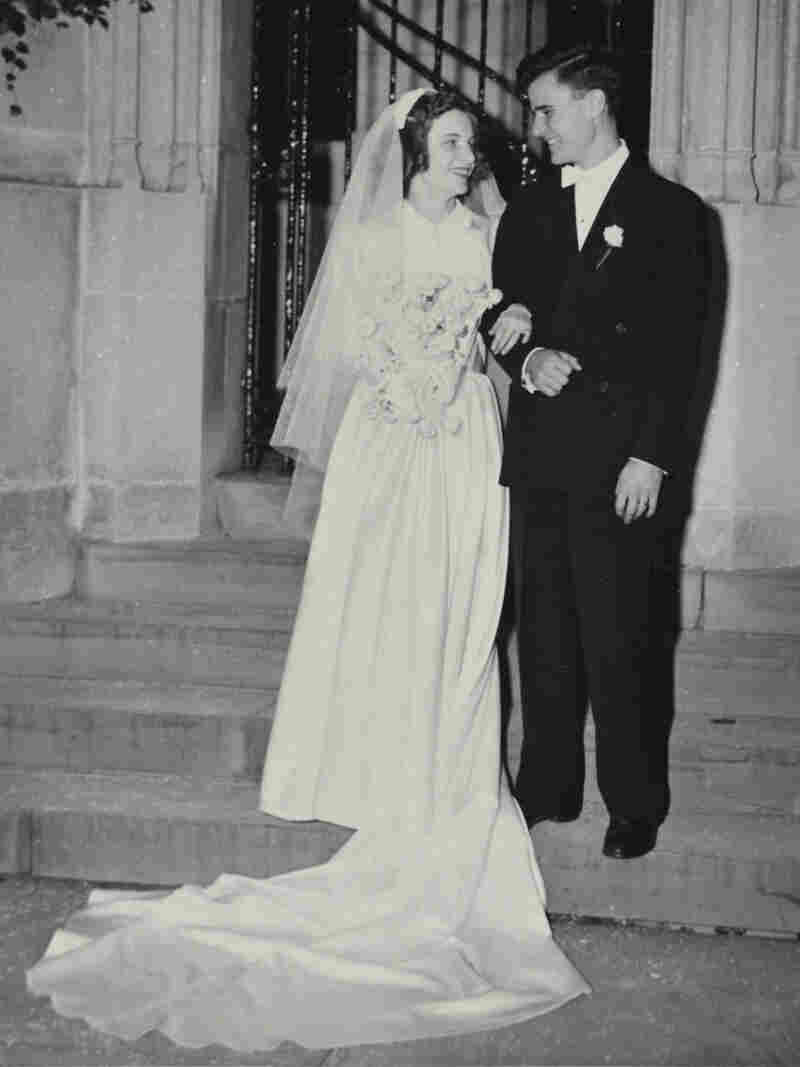 Marion and John Austin of Rutland were married on Oct. 7, 1950. She was 19 and he was 23. Today, John resides at a nursing home, where, before the coronavirus pandemic, Marion visited him every day. Courtesy of Marion Austin hide caption 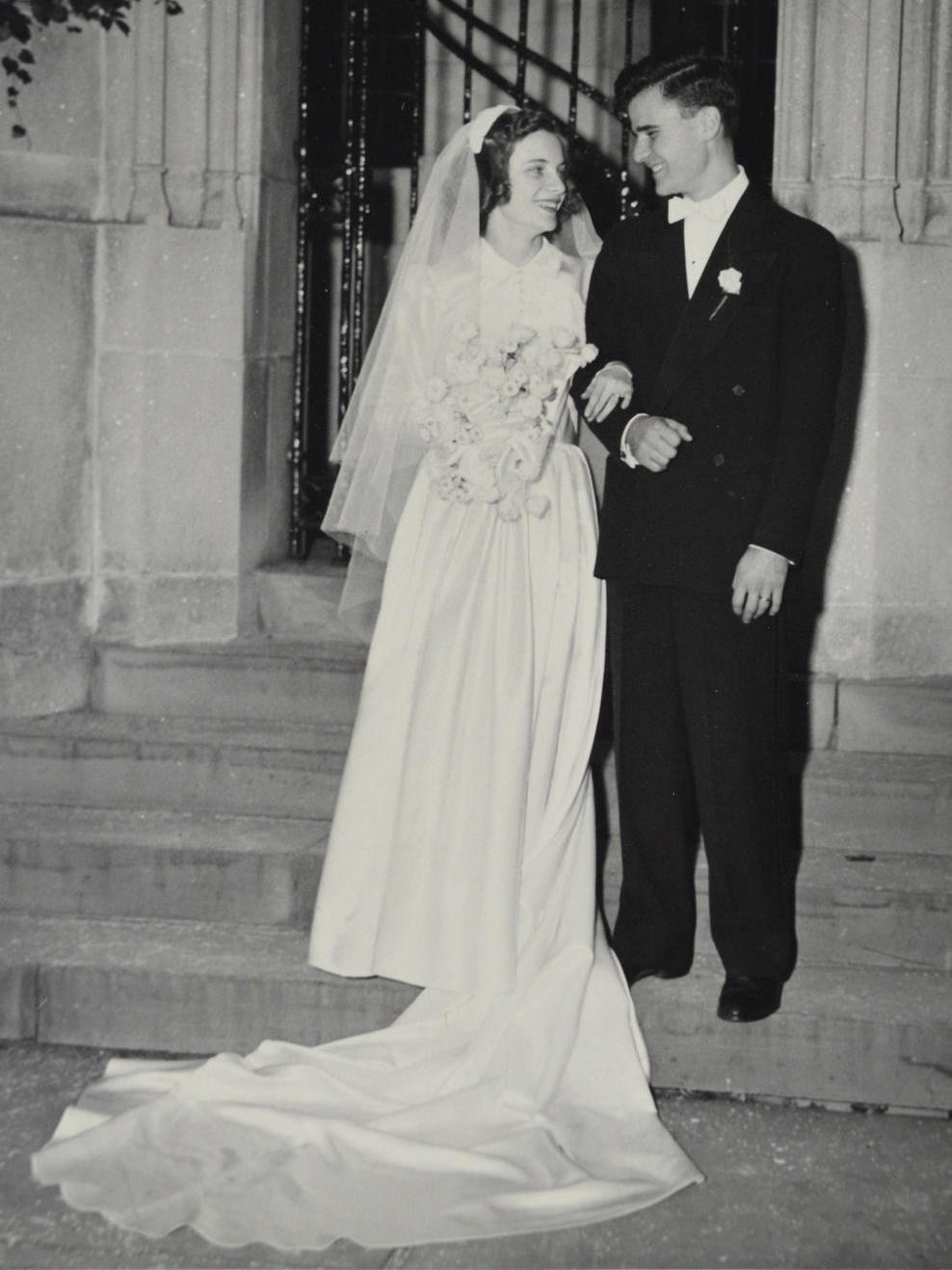 Marion and John Austin of Rutland were married on Oct. 7, 1950. She was 19 and he was 23. Today, John resides at a nursing home, where, before the coronavirus pandemic, Marion visited him every day.

"This is where the 'for better or for worse' comes in, you know?" she said.

Marion said she visited John nearly every day until last week, when nursing homes everywhere began to limit outside visitors to protect their clients from the coronavirus and COVID-19.

"It's not terrible or awful, it's just different," she said of the change. She understands and appreciates the precautions and, having visited so often, she knows and trusts the staff at The Pines.

"I don't have any worries about his care. I know the people who are going to be sure he's OK," she said. For example: "There's a gal in activities who always makes sure his hearing aids are in there ... and somebody else who makes sure he gets to all of the musical programs."

And now, staff at The Pines are also helping Marion FaceTime with John, since she can't be there to spend time with him in person.

On a recent day, she gave him a call.

Resting her phone on her lap, Marion relaxed, laughing with John and his nurse as she heard about his day, including how he'd laughed and joked through a dinner the night before with a friend named Lena at the nursing home.

"But we're still married right?" Marion said with a smile.

"I'll find out when you get here," John said, laughing.

For Marion, visits with John are always bittersweet. Their conversations aren't real conversations anymore. Even when she'd see him in person at the nursing home, she admits she felt exhausted in the elevator, heading home.

But not being able to see him is harder. She worries he'll forget her.

The concerns over COVID-19 are real, and Marion appreciates that she and her husband are at high risk. However, it's been hard; her caregivers support group has canceled its meetings and isolation looms.

And faith, she added, knowing the situation is out of her hands.

"That's why, from the day John went in that nursing home — even before — I have disciplined myself to take one day at a time. I'm still learning; I haven't gotten there," she said with a laugh. "But if I can stay in the present, I'm not thinking about how long this is going to go on. I can't."

So, she said, if all she has right now is FaceTime with her husband, she'll be grateful for that.