Accessibility links
How People With Weakened Immune Systems Are Navigating The Coronavirus People with compromised or supressed immune systems are especially vulnerable to the coronavirus. They are figuring out how to get by during this time of heightened concern about infections.

Listen · 3:38 3:38
How People With Weakened Immune Systems Are Navigating The Coronavirus 3:38 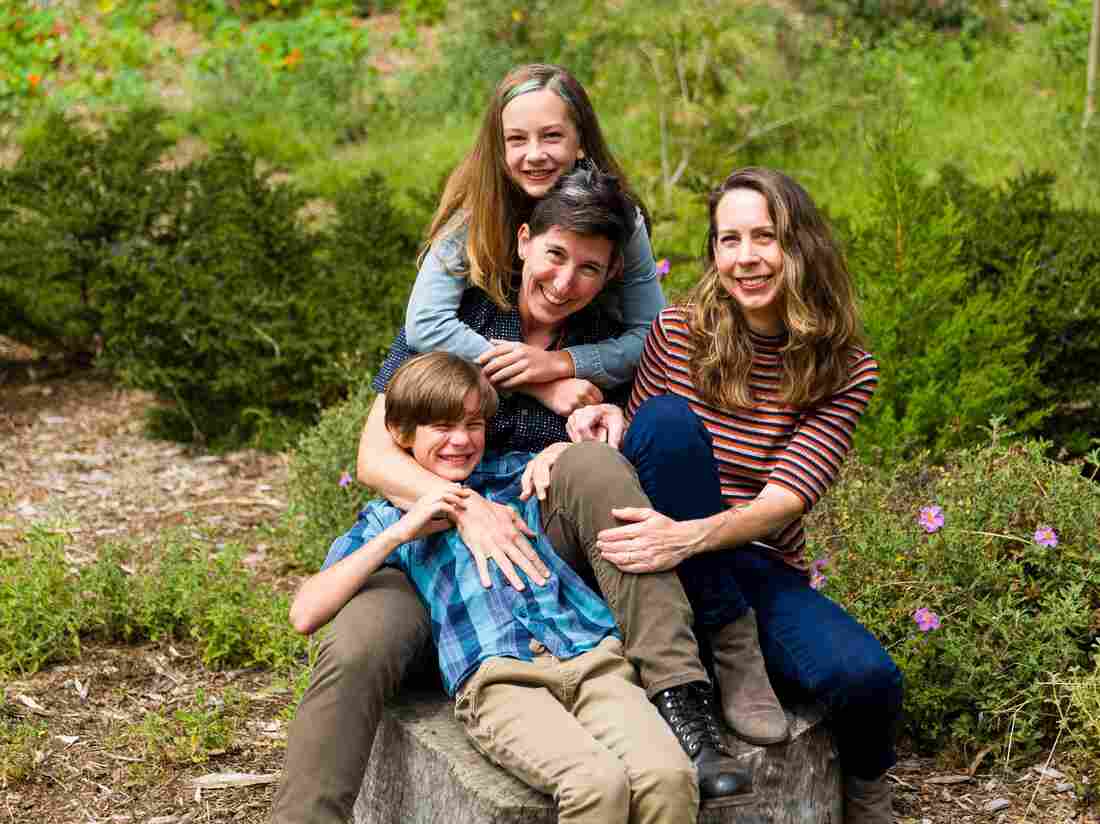 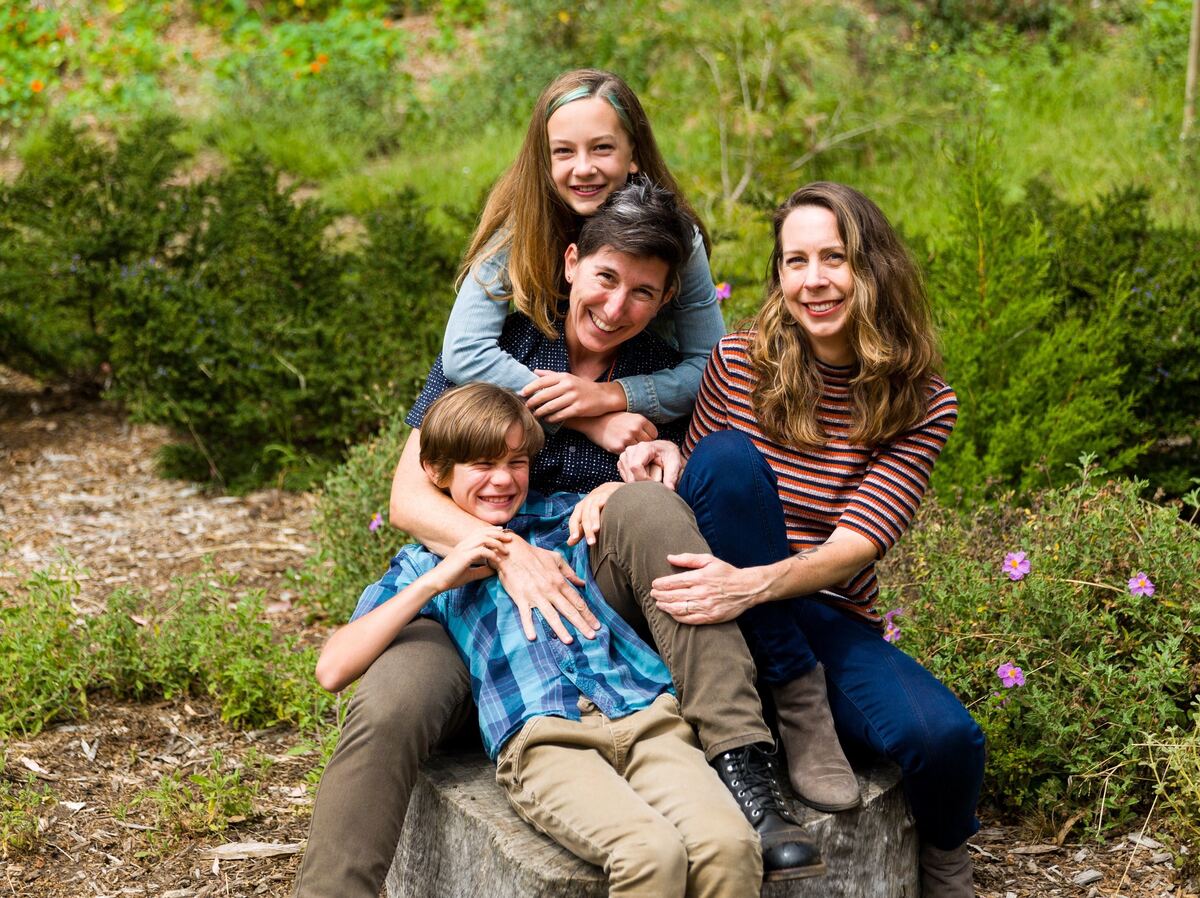 Candace Palmerlee (right), with her wife Toddy Fineberg and their kids Ellery and Cyrus Brownlee.

Candace Palmerlee's daily routine may seem familiar to most people in the age of a pandemic.

"I'm careful about door handles. I always put my sleeve over my hand or I touch things with my elbow instead of my fingers," said the massage therapist who lives in Walnut Creek, a suburb northeast of San Francisco. "I'm constantly washing my hands."

But Palmerlee, 46, hasn't been doing this for just a few weeks, she's been doing it for more than a year. Palmerlee has a rare autoimmune disease called relapsing polychondritis. It attacks her cartilage, and among other things, weakens her lungs and trachea.

To control her illness, she takes two medications that suppress her immune system, and is incredibly vigilant about avoiding illness.

"In my support group we joke that, 'wow, everybody else is finally living the way we live every day,'" she said.

Palmerlee is one of millions of Americans who is immunocompromised, meaning she has a weakened immune system. The coronavirus is especially dangerous for people in this category, including people with some cancers, HIV/AIDS, and autoimmune diseases.

"There are a number of ways that parts of the immune system can be damaged," he said. In addition to cancer and HIV/AIDS, he cited chemotherapy, aging, and medications that intentionally suppress the immune system.

Living With Immunosuppression During The Coronavirus Outbreak

Living With Immunosuppression During The Coronavirus Outbreak

"There are a lot of people receiving medications that can damage the immune system," Volberding said, "and probably some of them don't even frankly know that they're immunocompromised." This type of medication is common for people with psoriasis, Crohn's disease, asthma, and rheumatoid arthritis.

Volberding said it's important to watch out for this part of the population. "Being immunocompromised might not so much increase your likelihood of getting infected with something like COVID-19," he said, "but it might make the outcome of that infection much worse."

An autoimmune disease many Americans live with is Type 1 Diabetes. Aaron Kowalski, the president of JDRF, is among them. His organization, headquartered in New York City, funds research on the condition, advocates for access to new therapies, and provides support networks internationally.

"I think the community right now is scared," Kowalski said.

He said that when Type 1 Diabetics get sick in any way, managing the disease becomes much more difficult, and can be fatal.

"The fear in coronavirus is, 'if I get sick, what will happen?' In knowing that illness and diabetes are a very difficult combination," he said.

For some, multiple health issues compound their concerns. San Francisco-based community activist Chip Supanich is HIV positive, has pulmonary issues, and is on chemotherapy for Kaposi's sarcoma.

"I have never really paid attention to what I touch and in what order," Supanich said, "aside from after using the bathroom!"

Now, Supanich said, he's washing his hands after he touches almost everything. And he's completely changed his social routine, something challenging for the 59-year-old who lives alone, except for his cat Highlander.

"I won't be seeing friends much because you don't know who has it, and I am extremely sensitive," Supanich said. "Not seeing anyone is really hard for me."

Supanich knows that isolation can also be bad for health, so he asked his friends to regularly call him and others who are immunocompromised. He also advised them to check in with immunocompromised people to see if they may need help getting prescriptions or groceries, to help them avoid crowded places.

While massage therapist Candace Palmerlee worked diligently to avoid public places, she found out just days ago that she had tested positive for the coronavirus.

"I'd say my stomach dropped out," she said upon hearing the news.

Luckily, she had already been isolating at home, and believes she's through the worst of the virus. She thinks she picked it up through her kids, who were still attending school until recently.

She and her family will remain under quarantine for the next few weeks.