Accessibility links
Coronavirus Poses New Challenges To Down-Ballot Political Campaigns When Americans are "social distancing," how do candidates campaign? "You can't ethically go out to shopping malls, or knock on people's doors," said one candidate. 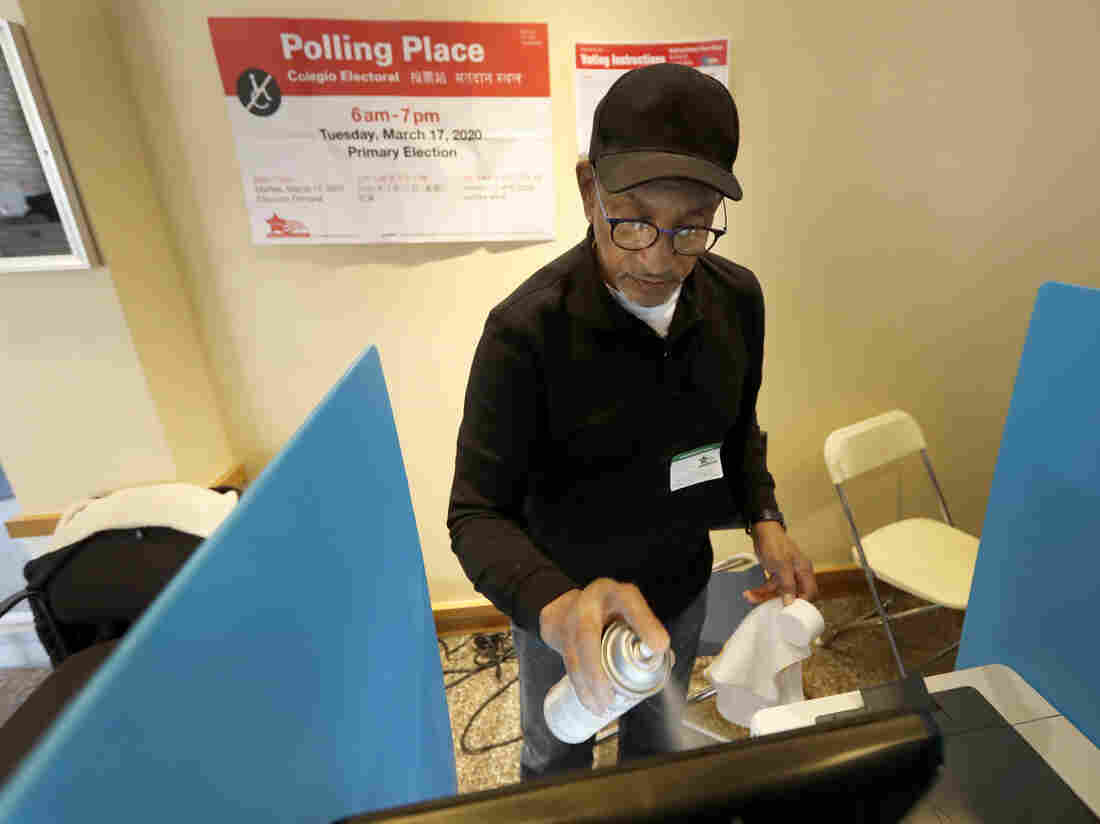 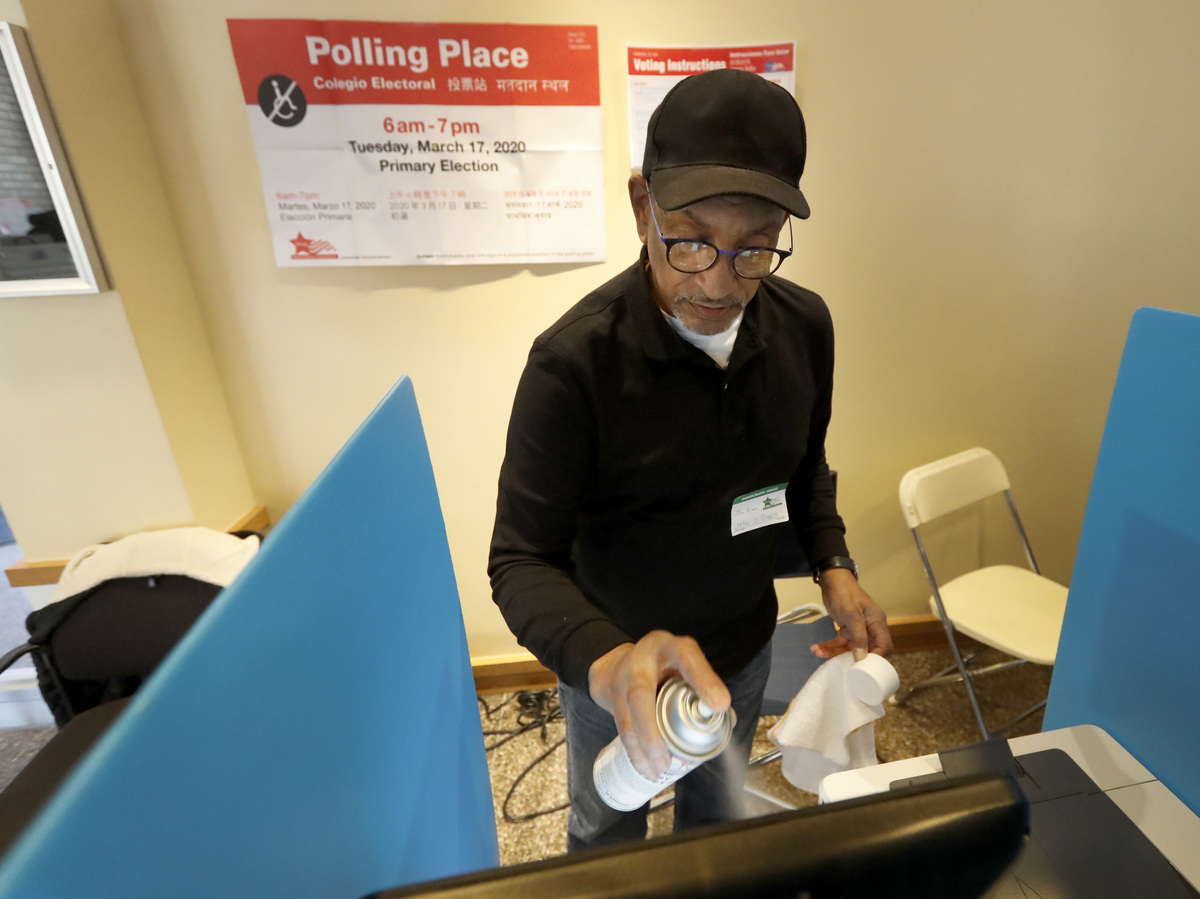 John Davis, a polling judge volunteer, sanitizes an electronic voting machine screen amid concerns about the COVID-19 coronavirus at a polling place in the Bronzeville neighborhood of Chicago, Tuesday, March 17.

Brianna Wu is hoping for an upset.

The software engineer is looking to challenge incumbent Rep. Stephen Lynch (D-Mass.) for a second time. But, before that, she has to get on the ballot for September's primary.

For congressional candidates like Wu, that means collecting 2,000 signatures, no large number. But with in-person contact several limited by the coronavirus outbreak, even that feels impossible now.

"You can't ethically go out to shopping malls, or knock on people's doors or have Democratic town halls," Wu said. "You can't put the public in danger by doing that."

In races up and down the ballot, in districts across the country, candidates have suspended canvassing because it's too dangerous for candidates to ask volunteers to knock on doors. In-person fundraisers have come to a full stop. Staffers who once filled campaign offices and spilled into the street are now working from home. It raises the question: When Americans from coast to coast are practicing "social distancing," how do candidates campaign?

For her part, Wu is one of roughly a dozen candidates who signed on to a letter urging Massachusetts to delay the deadline to submit signatures by 30 days. She argues that candidates facing tight deadlines to gain ballot access are stuck between two tough choices.

"Do I just throw away all the work I've done, or do I put the public in danger," she asked, rhetorically, having already made the decision for her own campaign.

That deadline is one of a series of challenges facing candidates who are figuring out how to run in an environment where many voters are more focused on their own well being than any upcoming election.

Wu's calendar used to be full of engagements, town halls and volunteers knocking on doors. Now, there's virtual town halls and call time — hours spent huddling to call would-be supporters — but even the proposition of asking for money is fraught.

"I had three different people just yesterday who had pledged to donate to my campaign and then we got in touch with them, and they were like, 'I just lost my job,' " she said.

Candidates are facing a series of challenging choices, said Amanda Litman, a co-founder of Run For Something, which supports first-time candidates. One of those is fulfilling the signature requirements to appear on the ballot to begin with.

"If you can't leave your home then you definitely shouldn't be going up to strangers asking them to sign something to help you get on the ballot in the first place," she said. "Challenge No. 2, we know that for these local candidates, for them the most effective way for them to win an election is to knock doors and personally connect with voters. Obviously that's not happening."

Instead, they're turning to things like virtual phone banks, text messages and digital advertising — in short, any tool at their disposal.

"We switched from knocking on doors to calling and texting people because we did not want to be contributing to spreading the virus in any way," she said.

We have decided to postpone petitioning to keep people safe. Here is the full statement on why: pic.twitter.com/CFhdFccHX8

The primary is still months away on June 23, but what primary day may look like isn't far from Goroff's mind. She hopes that if things haven't changed by June there will be easier access to absentee ballots.

"We don't know what's going to come next," she said. "But we want to make sure first and foremost people are able to vote, and able to do so in safety and not have to worry about exposing themselves to infection by voting."

In Illinois' 14th congressional district, state Sen. Jim Oberweis won a crowded, seven-way primary to take on incumbent Democratic Rep. Lauren Underwood in the fall. Underwood flipped the traditionally Republican seat in a suburban Illinois district outside of Chicago in 2018. This year, it's one of the GOP's top targets.

But in an interview, Oberweis says he's not thinking much about that right now. Oberweis, a businessman and a perennial candidate for office, said, "We're not really focusing right now on trying to win the election in November. We're focusing on how do we help people stay safe."

For Oberweis, the impact has also been personal.

"I have a daughter and family out in California. I've been able to talk to them with FaceTime and she is concerned that their whole family has this virus," he said. "She can't get a test because their symptoms are not that serious."

Now, he said, his daughter is hoping that at least one member of the family can soon be tested for coronavirus so they'll have a better sense of whether the whole household is affected.

Since he won his primary, Oberweis has been calling supporters who helped put him on top of a crowded field, and has been focused on providing a steady stream of resources over social media.

"What we're doing from a campaign standpoint is very limited," he said, when asked what his campaign may look like in the future. "It will be a virtual campaign, we're talking to some people, we will be doing some tele-town halls, but even the town halls are going to be focused on how we help people."