Accessibility links
U.S. Hospitals Prepare Guidelines For Who Gets Care Amid Coronavirus Surge Doctors in Italy are overwhelmed by coronavirus cases and prioritizing which patients get care. Many U.S. doctors could soon be making the same life-or-death decisions. 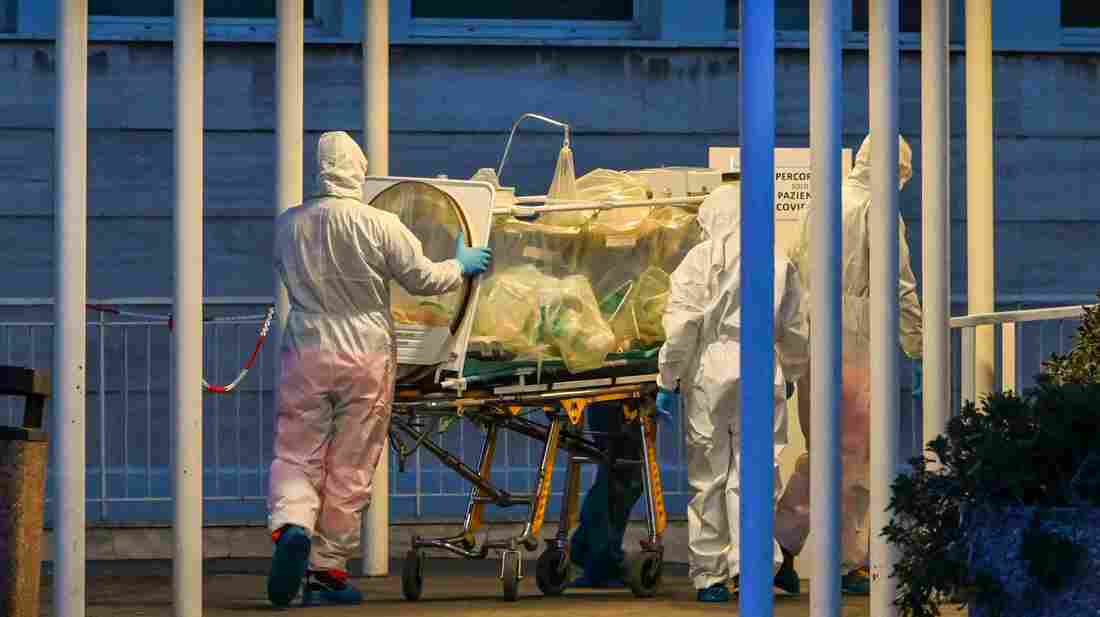 Medical workers transport a patient into a newly built temporary hospital on March 16 in Rome. Doctors in Italy are making difficult decisions about who should receive care. Andreas Solaro/AFP via Getty Images hide caption 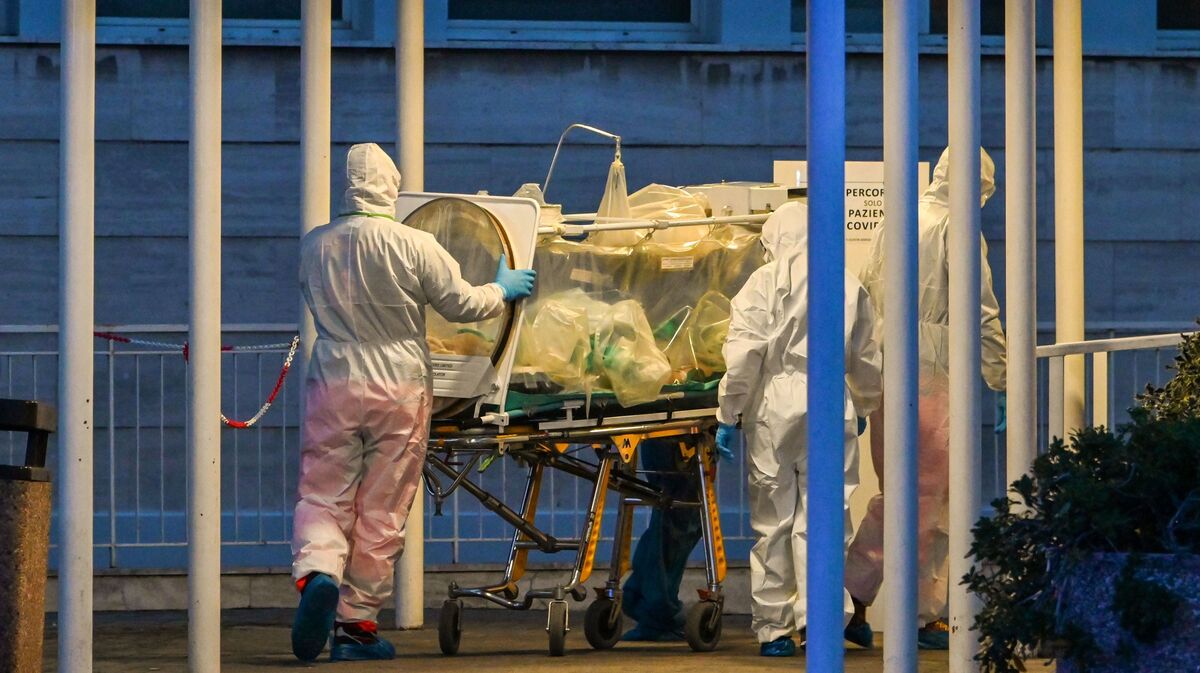 Medical workers transport a patient into a newly built temporary hospital on March 16 in Rome. Doctors in Italy are making difficult decisions about who should receive care.

As COVID-19 spreads rapidly through the United States, many American doctors could soon be making the decisions that overwhelmed health care workers in Italy are already facing: Which patients get lifesaving treatment, and which ones do not?

Every accredited hospital in the U.S. is required to have some mechanism for addressing ethical issues like this — typically, an ethics committee made up of not just medical professionals but often also social workers, pastors and patient advocates. Sometimes in partnership with hospital triage committees, they create guidelines for prioritizing patient care if there's a resource shortage.

As the number of coronavirus cases rises in the U.S., hospitals have a new urgency in revisiting and updating those guidelines.

They vary from hospital to hospital, but their overall goal is usually to save the most lives. So hospitals consider a combination of factors: age, life expectancy, how severe a patient's illness is, how likely treatment is to help and whether a patient has additional illnesses that could shorten the person's life span, such as cancer or heart disease. Hospitals can then use those factors to develop scoring systems or clinical scores to prioritize care.

In early March, as the coronavirus outbreak worsened in Italy, an Italian medical association issued guidelines finding that doctors might have to prioritize younger COVID-19 patients over older ones. "It may be necessary to place an age limit" on access to intensive care, the guidelines advised, with the goal of preserving limited health care resources for patients more likely to survive.

But age is rarely the only factor in such decision-making. For example, a 20-year-old will not always get priority over a 60-year-old, especially if that 20-year-old has additional health problems that could mean the 60-year-old is likely to live longer anyway. Scoring systems can disadvantage older patients, because as people age they become more susceptible to disease, which can hurt their clinical scores.

Another potential factor is "social usefulness," a concept that might favor, for example, a sick nurse because that person could go on to save other lives.

"Some people think that people who are in a position to help address a crisis in the future if they were to recover, like health care workers and first responders, maybe should receive some sort of priority in triaging scarce resources," said Emily Rubin, a pulmonary and critical care physician at Massachusetts General Hospital in Boston and a co-chair of the hospital's ethics committee.

Could other professions also be a factor, meaning that a hospital might prioritize, say, a hedge fund manager over a landscaper? That's unlikely, according to Dr. Matthew Wynia, an infectious disease and public health specialist who directs the University of Colorado's Center for Bioethics and Humanities.

Wynia said most hospitals should operate on the principle that every human life has equal worth, so patients are clinically evaluated the same regardless of their employment, gender, race or insurance, or whether they have children.

"So if you had someone who was an upstanding member of the local community or a big donor to the hospital or a well-known politician versus a clerk at the 7-Eleven or a homeless person," Wynia said, each of those patients should be evaluated equally.

There's already evidence that when it comes to coronavirus testing, rich and powerful people are getting greater access than ordinary Americans.

But ideally, hospital decision-makers would have "blinded" information that prevented them from knowing details about a patient's source of payment, race, gender and other personal details, unless it were clinically relevant, Wynia said.

Hospitals could adopt a lottery or first-come-first-served system for triaging patients, but that might mean someone less sick is treated before someone more sick, potentially failing to achieve the goal of saving the most lives. Hospitals could treat worse-off patients first, but if those people are unlikely to survive, doctors might be better off focusing on people who are less ill.

Whether any of these guidelines would work in an extreme crisis situation, when hospitals may have few clinical details about patients, is an open question.

"A million intricacies" could come into play in a real-world setting, Rubin said.

Numerous doctors interviewed by NPR said the U.S. lacks an exact historical comparison for how the coronavirus pandemic could play out but said guidelines at least offer general principles for steering hospital decision-making.

They also said guidelines must be transparent so the public has faith that the guidelines are fair and ethically justifiable. Wynia predicts that many hospitals will soon begin releasing their triage guidelines in case the U.S. ends up in an Italy-like situation.

And guidelines are needed not just for determining which patients to treat but how long to treat them. Nancy Berlinger, a research scholar at the Hastings Center, a nonprofit bioethics think tank in Garrison, N.Y., posed an ethical dilemma.

"Let's say a patient is on a ventilator but isn't improving, and this patient might — might — do better if they were allowed to stay on the ventilator longer, but there are people waiting for that ventilator," Berlinger said. "Do you withdraw the ventilation earlier than you might normally do? So it's not just who gets the vent — it's also who stays on it."

For now, U.S. hospitals are unsure whether their triage guidelines will be needed in the coronavirus pandemic, but they must brace for the possibility.

"This is a worst-case scenario that we're talking about," Wynia said. "We hope we never get there, but we have to get ready for the worst. And it would be irresponsible not to be getting ready right now because of what we're seeing in other places around the world where things really have gone very, very badly and where they have run out of equipment, supplies, staff, space, people. So we need to be prepared for that."