Accessibility links
Review: 'Hearts Of Oak,' By Eddie Robson Eddie Robson's slim but punchy new novel is set in an unnamed city, made mostly of wood. The city has a King. The King talks to a cat. It's a gem of offbeat weirdness — with a deeply thoughtful core. 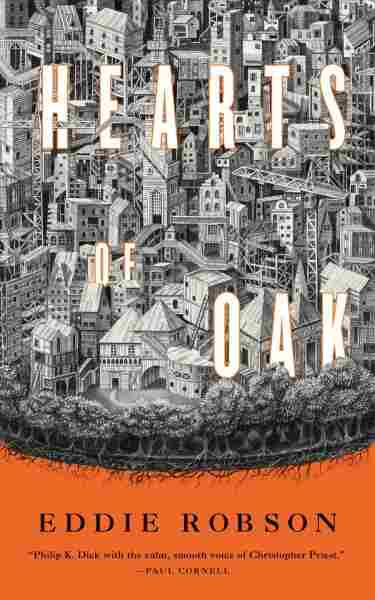 The current landscape of speculative fiction is teeming with astounding innovations and lavish spectacles — from the lesbian necromancers of Tamsyn Muir's Locked Tomb books to the world-shaking power dynamics of N. K. Jemisin's Broken Earth trilogy. In the midst of all that genre-expanding sprawl, however, there's still room for short, humble, understated works.

Eddie Robson's new novel, Hearts of Oak, is exactly such a story. Brief in page-count and quiet in voice, the book is a gleaming gem of offbeat weirdness and oddball humor, a work that blends fantasy and science fiction more cleverly than almost anything in recent memory. But underneath that quirky whimsicality beats a deeply thoughtful, even melancholy pulse.

So how exactly does Hearts of Oak blend fantasy and science fiction? That's a hard question to answer — not because Robson doesn't execute this blend brilliantly, but because explaining this blend is, in and of itself, a major spoiler. Here's what it's safe to say: The book takes place in an unnamed city, one constructed mostly of wood, that feels vaguely familiar and somewhat fairytale-esque, but is impossible to place.

The city has a king. The King talks to a cat. The cat talks back. In fact, Clarence the cat is the King's closest advisor, and their exchanges are the stuff of Monty Python absurdity and satire, an extended riff on the petulance and ineffectiveness of our chosen leaders that's more acidic than most overtly political novels being written today. The King is obsessed with constructing more buildings and increasing his city's size, a never-ending process that consumes the city's labor and resources.

In A Dark Future, These 'Upright Women' Bring Hope

Caught up in that obsession is the second main character of Hearts of Oak, Iona Taylor. Iona is one of the city's oldest and most revered architects. She battles constantly with the illogic of bureaucracy, much of which stems from the King's childish whims. She doesn't think she's ever met the King, but she's not sure; she's been alive for so long, and her memory has grown so hazy that she's no longer even sure what buildings in the city she's designed.

Her confusion isn't helped by the fact that Iona has begun hearing words that don't exist in her language, but that she seems to mysteriously understand: words like "concrete," "money," and "electricity." When a fire breaks out on a construction site — something that never happens in the surreally idyllic city — the ensuing tragedy thrusts both Iona and the King into unchartered territories of mystery, memory, and the very nature of their bizarre reality.

The book packs in oodles of dry wit and droll self-mockery, the sort of profound and lacerating laughter that Robson's countrymen Douglas Adams and Terry Pratchett perfected.

Robson is a previously published novelist, but his primary background is in other media: television, podcasts, comics, and radio, most notably the BBC radio sitcom Welcome to Our Village, Please Invade Carefully as well as official audio episodes and comic strips for the Doctor Who franchise. He's used to writing concisely and efficiently, with a strong emphasis on dialogue. Those skills shine in Hearts of Oak. The book packs in oodles of dry wit and droll self-mockery, the sort of profound and lacerating laughter that Robson's countrymen Douglas Adams and Terry Pratchett perfected. At the same time, there's a poignant sincerity to Iona's struggle to understand herself and her world — and even to the King's inept, quixotic quest to build the largest city in a world where, apparently, there aren't even any other cities.

It's not unusual for a work of fantasy and/or science fiction to plant a huge revelation on the reader halfway through, something that challenges the protagonist's understanding of themself or what they believe to be real. But the shift that Robson drops in the middle of Hearts of Oak is seismic. In a sense, it feels like two very different novel-fragments glued together, with a pivot between them that's downright mind-blowing.

It's a testament to Robson's swift storytelling, endearing characters, and deftly controlled world-building that the book not only works on both ends but succeeds wildly. Are we the shapers or the products of our surroundings? Is society a mechanical apparatus or an organic one? Can a talking cat ever get a break? Robson satisfyingly stirs up an entire trilogy's worth of wacky and wise philosophy in the span of a couple hundred pages. Hearts of Oak may be small in stature, but it packs a fat, speculative wallop.