Accessibility links
Restaurant Industry Faces A Sudden Collapse In Coronavirus Shutdowns Rapid shutdowns to stem the coronavirus have delivered an unprecedented blow to restaurants around the U.S. Many are quickly running out of cash and their workers are losing their jobs. 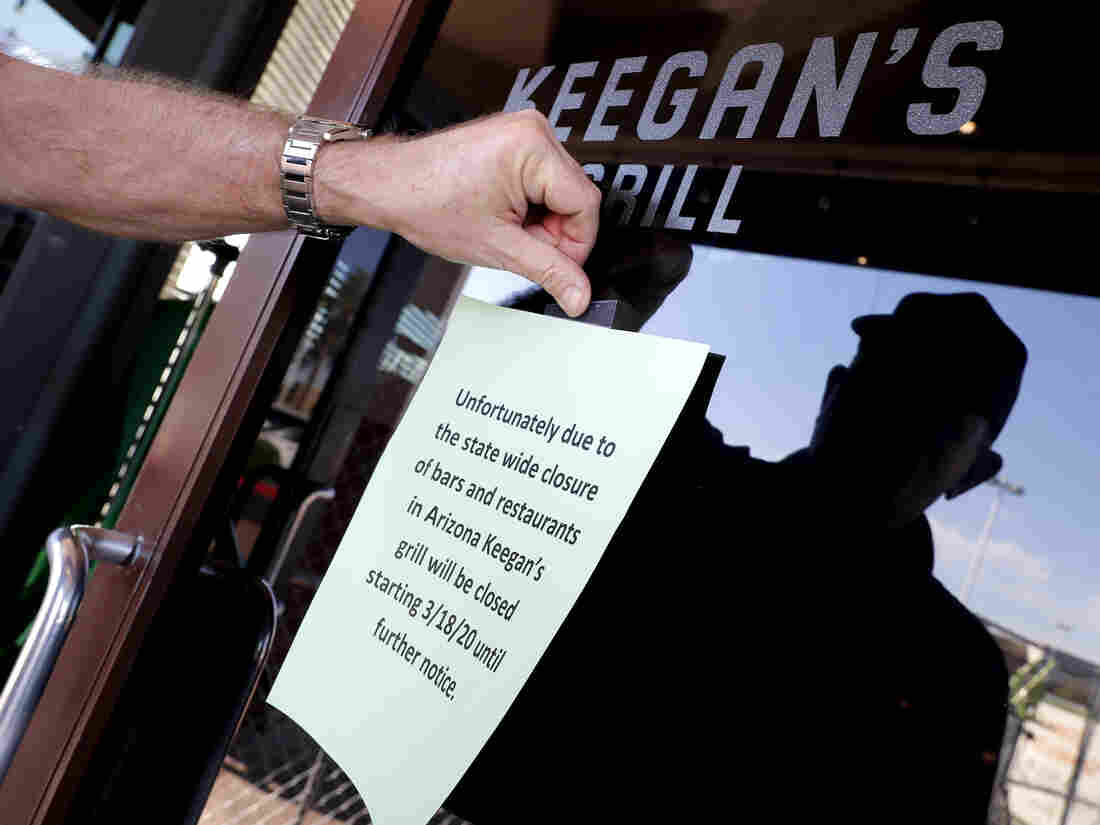 Owner Steve Johnson attaches a notice on the door of Keegan's Grill in Phoenix notifying guests his restaurant will close. Rapid shutdowns have delivered a blow to restaurants around the country. Matt York/AP hide caption 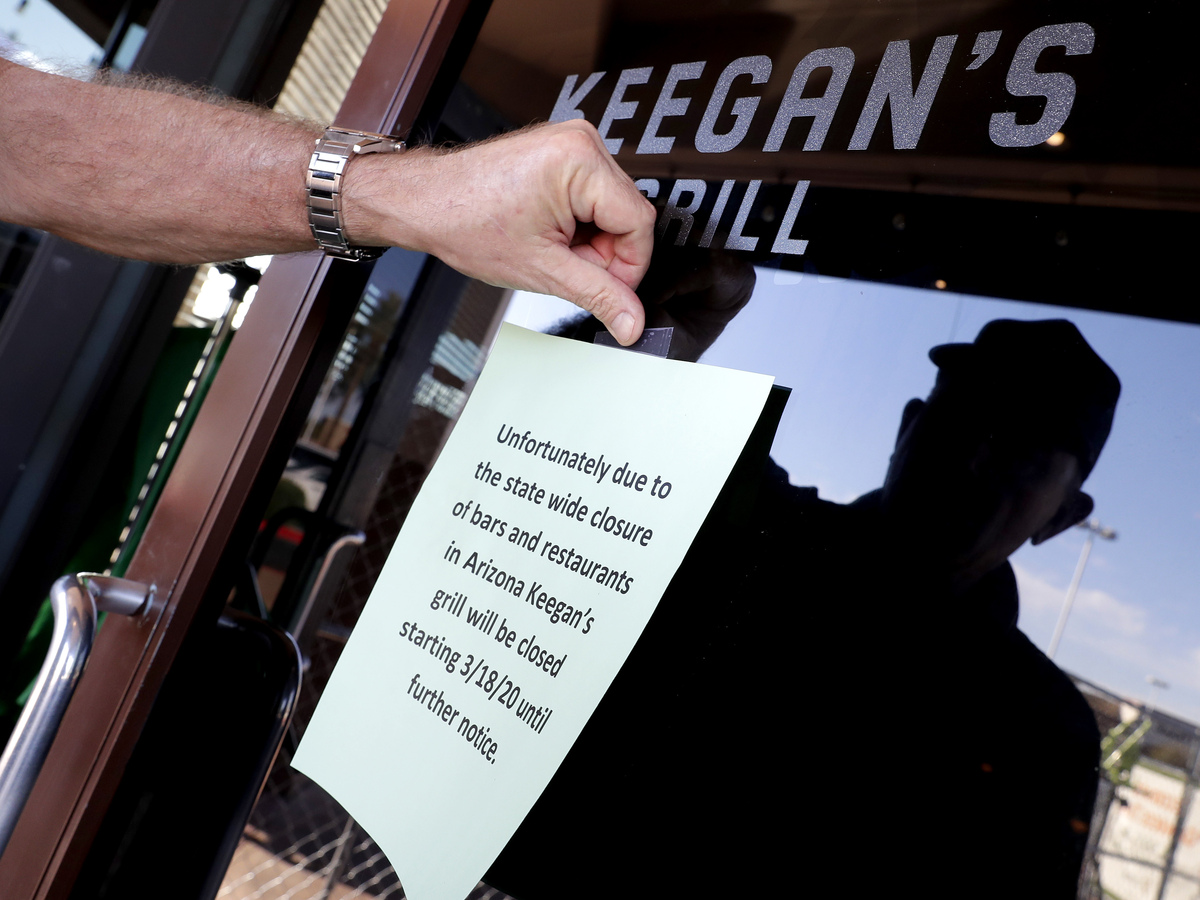 Owner Steve Johnson attaches a notice on the door of Keegan's Grill in Phoenix notifying guests his restaurant will close. Rapid shutdowns have delivered a blow to restaurants around the country.

These are anxious times for people like Melvin Rodrigue, who lived through Hurricane Katrina. It destroyed his home and shut down his famed Galatoire's restaurant in the French Quarter of New Orleans.

This is far worse, he says.

"I think Katrina is going to prove to be a cakewalk compared to this," Rodrigue says. Insurance paid for his losses then. This time, it won't.

Rapid shutdowns in cities and states to stem the coronavirus have thrown restaurants across the country into sudden and complete disarray. Revenue dried up abruptly, workers faced mass layoffs and restaurant executives tried to manage the resulting chaos.

Just about every restaurant nationwide has been hit hard at once, making this disaster unique.

"The coronavirus epidemic, it's unchartered territory for us," says Sean Kennedy, a spokesman for the National Restaurant Association.

Restaurants of all types are in varying states of collapse. The industry is the country's second-largest private employer with 15.6 million workers. Now, many of them are without work and face a suddenly shaky job market.

"It doesn't matter if you're a big chain or a small corner diner, you're seeing the impact immediately," Kennedy says. And it's far from clear when it will end.

For Rodrigue, it all crashed down with breathtaking speed. Last Sunday, Louisiana officials first raised the idea of a shutdown. Then things accelerated. By Monday, the mandated closure had moved up twice.

"For a restaurant, you have to have certainty in order to operate, and those are three changes in one day — one 24-hour period," Rodrigue says.

Just like that, the economy seized up. Rodrigue is trying to adapt by converting his 115-year-old white-table restaurant into a take-out joint and using up fresh seafood that was supposed to go into iconic Creole specialties like shrimp remoulade and trout amandine.

But mostly, he's watching his dwindling supply of cash. There's rent to pay and utilities. And he must conserve some money in order to reopen again — whenever that might be. Rodrigue feels an urgent obligation to carry on, for the sake of his 160 workers, most of whom he had to lay off.

In between all this, he's counseling waiters and sous-chefs about how to stretch their budgets: "If you have the choice between buying a box of Hamburger Helper and going to the drive-through somewhere, you need to be as frugal as you possibly can for your own sake and your family's sake."

And so you can see how the cycle keeps repeating onto itself.

Many restaurant owners are searching for ways to help their staff. Some are trying to sell gift cards and giving proceeds to employees. A new federal law, the Families First Coronavirus Response Act, passed last week, granting workers at smaller businesses up to two weeks paid leave.

But the Restaurant Association's Kennedy says that would require restaurants to fund the leave up front at a time when most are already too cash-strapped. Reimbursement from the federal government — as well as any potential bailouts — might arrive too late. Most restaurants have enough cash to last a couple days, or maybe a couple weeks.

"They simply aren't going to have the financial wherewithal to fund that paid sick leave mandate, Kennedy says.

The collapse has a massive impact on workers and their families, including Carolyn Stromberg Leasure, who is set to give birth soon in Charlottesville, Va.

Her chef husband lost his job this past week, which means they have no health insurance. It's a terrifying prospect.

"I have a lot of trouble sleeping," in large part because of heightened anxiety, she says. Leasure says she's overwhelmed with the chaos, calling around to try to find insurance coverage while also managing her 3-year-old son. On top of that, she has health concerns about the birth itself. She decided to induce labor earlier, hoping avoid overcrowded hospitals.

"As a worker, losing your job a week before you're having a baby, [and] you find out that you don't have insurance is a really big deal," she says.