Accessibility links
Prisons And Jails Change Policies To Address Coronavirus Threat Behind Bars Some prisons are waiving fees for hygiene supplies and county jails are releasing certain inmates early to combat the potential threat posed by the Covid-19 virus. 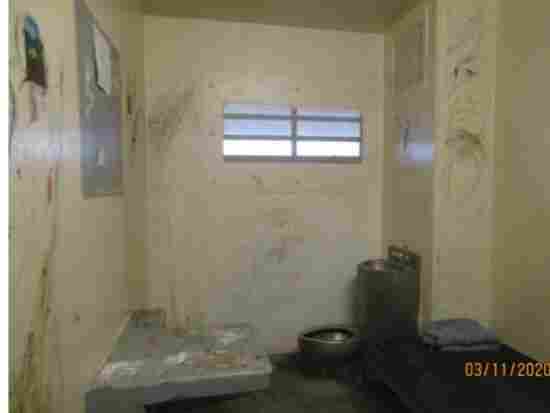 A picture of a cell at the state prison in Florence, Ariz., where attorneys for the Prison Law Office and ACLU found what they called "squalid" and "filthy" conditions on a recent tour. PACER hide caption

As the Coronavirus spreads across the nation, it has exposed potentially dire health care conditions in some prisons and jails. That's forced many to change the way they operate.

Arizona and Minnesota prison officials waived copays charged to inmates for medical visits and waived fees for personal hygiene supplies. Some are changing visitation policies. At county jails, there are calls to release inmates early so they can reduce overcrowding.

Health and prison officials have been sounding the alarm about the risks posed behind bars. With so many people bunched together in the small spaces, jails and prisons are considered perfect incubators for the coronavirus to potentially take hold.

"There are over 42,000 people incarcerated in Arizona and the environment of prisons are fertile for an outbreak – closed quarters, lack of resources, and a significant population who have a higher risk of contraction," said Becca Fealk, from the American Friends Service Committee of Arizona. The group advocates for prison reform.

County jails are also taking steps to minimize the risk. Alameda County plans to release nearly 250 inmates from its county jail after sentencing modifications, according to the county's sheriff's office. Additionally, 67 people were released by courts on their own recognizance. In Los Angeles, the county has also begun releasing inmates early and is encouraging fewer arrests, using citations when possible.

At least one U.S. senator is advocating for a nationwide plan to release inmates early who meet certain criteria.

Sen. Kamala Harris, D-Calif., tweeted that she is pushing the Bureau of Prisons to release "all low-risk inmates, including those who are in pretrial detention because they can't afford to make bail." She noted that people "in detention are especially vulnerable to the spread of coronavirus."

State prisons share that vulnerability, but some administrators have been slow to respond to the threat.

Arizona prisons, like many others around the country, limit access to some hygiene products out of safety concerns. Prison officials say hand sanitizer, for example, could be misused because of its high alcohol content.

There also is the question of fees. Arizona prisons force men and women to pay for their own personal hygiene supplies like soap and toothpaste. If they need medical attention, such as being seen by a nurse, it's a $4 copay.

But some people can't always afford to pay, leaving them vulnerable. Attorneys from the Prison Law Office and the ACLU asked a federal judge to intervene, alleging unsafe conditions given the threat posed by the coronavirus pandemic.

An Arizona federal judge pressured the Arizona Department of Corrections to change state prison health and hygiene policies. The department announced it is now waiving copays for inmates with cold and flu symptoms, and making soap available for free.

"The health and safety of our staff and inmates at the Arizona Department of Corrections, Rehabilitation and Reentry is our paramount concern," David Shinn, director of ADCRR, said in a statement. "In managing this situation, our two top priorities are safety and public health as we work to mitigate the potential spread of COVID‐19 within our prisons."

Prison Law Office attorney Corene Kendrick said Arizona is one of 40 state prison systems in the U.S. that charges incarcerated people a copay every time they seek health care.

"The state's decision to temporarily suspend the $4 copay — the equivalent of a week's worth of work at the prisoner minimum wage of 10 cents an hour — for people reporting cold and flu-like symptoms is a step in the right direction," Kendrick said, "but it exposes how counterproductive it is to have such a barrier to seeking care."

Kendrick and her team interviewed more than 500 inmates at the state prison in Florence, Ariz., and she says many expressed concern over lack of basic necessities.

"Unfortunately, prior to the COVID-19 crisis, we regularly heard from incarcerated people that there were shortages of hygiene supplies such as toilet paper and menstrual products," Kendrick said.

She said most Arizona prison bathrooms are not equipped with soap or hand sanitizer.

According to a 2019 department policy, even the poorest inmates have to pay for personal hygiene products: "All indigent inmates shall be charged for indigent supplies. Charges shall remain as a debt on the inmates' (sic) account until the balance is paid in full or partially paid. After one calendar year, the debt balance will be retired."

Nishi Kumar, a staff attorney for The Promise of Justice Initiative, said a similar system for indigent inmates is in place at the Louisiana State Penitentiary.

"There is a 'prison soap' that people can get if they are indigent," Kumar said. "If you have debt on your books from being indigent, half of any future money that you get goes to paying off your debt."

So far, the prison has not waived the fee.

The burden of paying for hygiene products often falls on the families of incarcerated families. One woman, whose daughter is incarcerated at the Perryville women's prison in Arizona, estimated she spends about $500 each month on commissary items just to keep her daughter fed and healthy.

The woman, who asked to remain anonymous for fear of retribution, said her daughter was worried that the virus was already in the women's prison, noting that many inmates were displaying symptoms. "She was up all night listening to the entire bay cough," the woman said.

As of Wednesday, Arizona prison officials say there are no confirmed cases.

Carmen Hreniuc, whose son is incarcerated at the state prison in Eyman, Ariz., said the costs of supporting her son are steep.

What Happens To People's Legal Cases As Coronavirus Shuts Down Courts?

What Happens To People's Legal Cases As Coronavirus Shuts Down Courts?

"We learned that we are all being sentenced as the financial impact on the family is outrageous," Hreiuc said. "Weekly purchase of additional food, hygiene, and personal items cost around $350 monthly."

Hreniuc said while they may get relief with the recent temporary fee waiver, she is worried about the families that are not able to afford this additional expense.

"It's a weekly struggle to manage the food and other expenses," she said. "What's going to happen now with everyone's work schedule being cut or nonexistent? Indirectly, this will create more hardship on the inmates, resulting in less food, less communication, and less personal hygiene items."

The Vera Institute of Justice has issued guidance for better hygiene in prisons and jails, recommending facilities "provide free hand sanitizer and antibacterial soap to all people in custody and replenish several times a week."

Becca Fealk, program coordinator with the American Friends Service Committee of Arizona, said it is unfortunate that it took a viral pandemic to force the Department of Corrections to provide basic hygiene and medical care.

"Here in Arizona and across the U.S. we have built a system of punishment that is traumatic, and this is only increased with the coronavirus," Fealk said. "ADC must do more than just provide soap to reduce the chance of an outbreak. They need to release people, including older/aging adults who can be cared for by their loved ones."

Fealk said her group is recommending the Department of Corrections stop admissions "until this situation is under control."

While temporary fee waivers and other changes are a positive step, "it's really just rearranging deck chairs on the Titanic" says David Fathi, director of the ACLU National Prison Project.

Prisons are extremely high risk environments, he says, because there are large numbers of older and medically fragile people living in close quarters.

"The only effective response is to reduce the population density by releasing people," Fathi says, "starting with those who are most at risk of severe injury or death if they were to contract the virus."