Accessibility links
The Ethereal Beauty Of The Century-Old Theremin, Embodied The thereminist Armen Ra had a rocky start, fleeing Iran with his family as a child before finding a successful career as a club fixture, model and drag queen. Then came a little white lie. 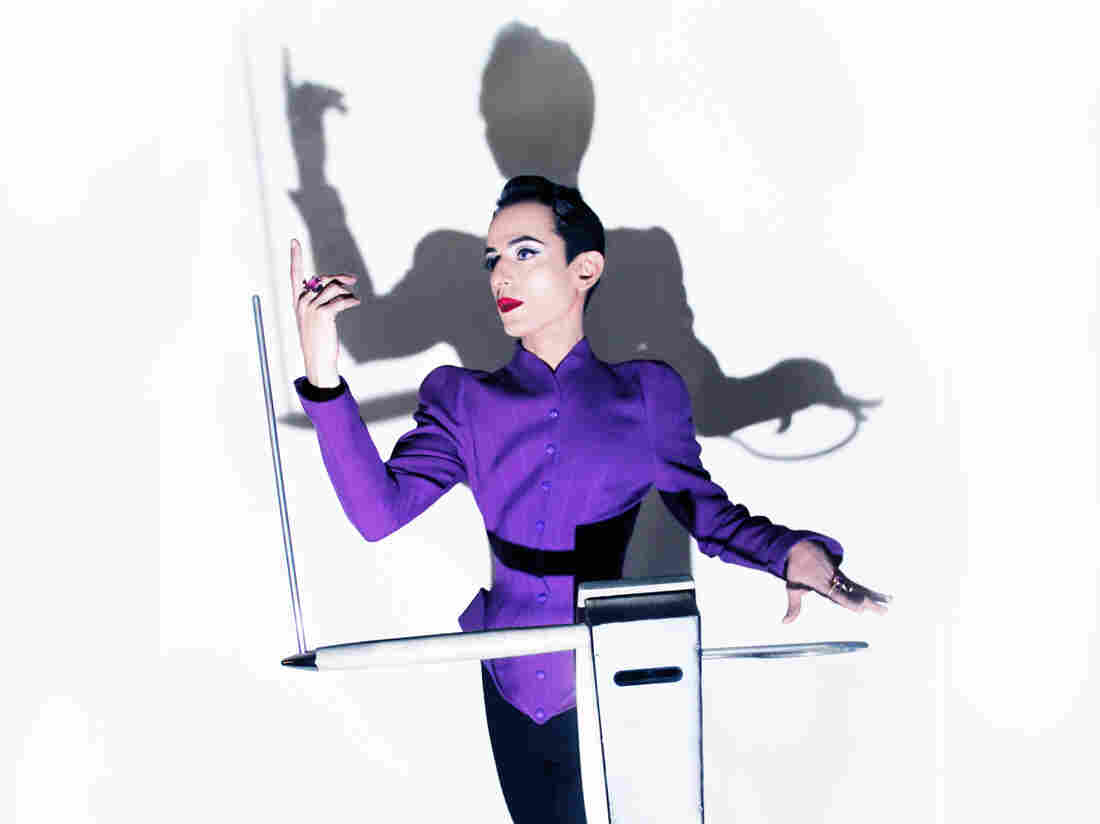 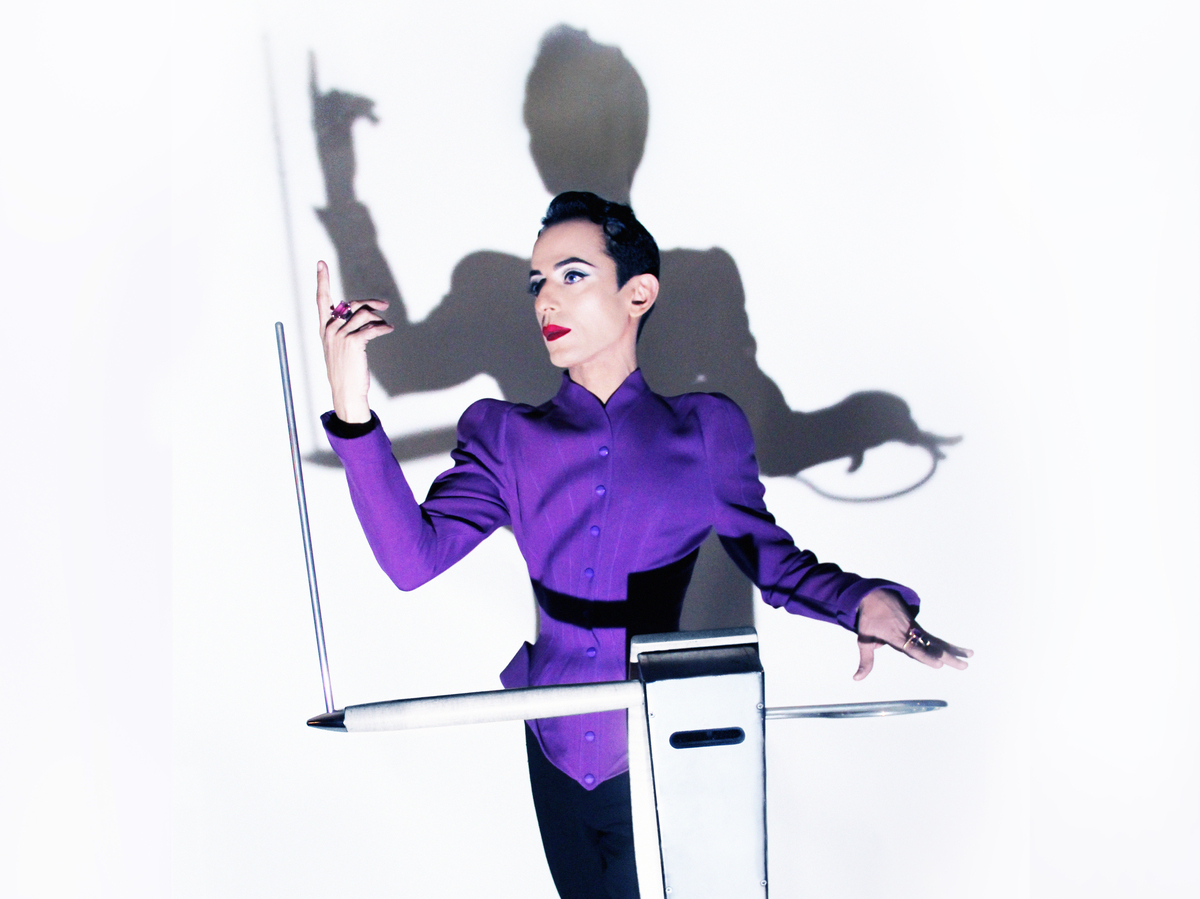 Josef Jasso/Courtesy of the artist

Talking about the "magic of music" is a timeworn cliché that places a patina of mystique upon the fairly straightforward creative process of practicing a lot to get good at something. The theremin, perpetually maligned, misunderstood and overlooked, is one of the only instruments where the relatively quotidian act of creating noise actually looks like magic: a hand hovers near two antennas, manipulating a magnetic field to produce an otherworldly wail that sounds like a field recording of a banshee from 1929.

This early electronic instrument first appeared 100 years ago, when a Russian physicist named Leon Theremin created it, and toured it around Europe as a curiosity, before bringing it to America — after giving Stalin a personal demonstration — in search of a wider audience. It didn't catch on like he'd hoped. Maybe it was the instrument's alien sound, or the fact that having perfect pitch would go a long way toward being able to play it correctly, or maybe it was just the general etherealness of the theremin itself — people were not accustomed to "hearing" electricity. To many in the U.S. the theremin was interesting, but it wasn't something you'd just pick up and play like, say, a guitar. Like any relatively obscure thing, the existence of the theremin felt a bit like a catch-22: how would more people start playing it, if not that many were doing it in the first place?

Eight decades later, in the year 2000, a young Armenian from Iran named Armen Ra told a reporter a very important lie. "I was modeling with different photographers in New York, including David Lachapelle. The New York Times Magazine was doing a story on him, so he flew me and Amanda Lepore and a few other people [to LA]. He had an opening and a party. There was a reporter who was following us around for the whole weekend. I was unknown, except in the New York club scene. He interviewed me, and he said, 'Besides modeling, what do you do?' I lied and said 'I'm studying the theremin.' I wanted to make myself sound interesting, because I wasn't doing much. I was doing makeup and going to clubs. Because I was nobody, I didn't think he would print any of what I said."

But there it is: "Amanda Lepore, whose flawless transformation from male to female is almost incidental to her voluptuous lips, is here from New York, along with Princess Zoraya (Armen Ra), who is learning to play the theremin." Other attendees at the party included Paul Ruebens, Matthew McConaughey and Sopranos star Drea De Matteo. (It was a moment in time.) "It came out and I said 's***.' " Ra says. "Some of my friends were asking, 'Really? You're studying the theremin?' "

Now, a century after Theremin invented the theremin, Armen Ra — a slight man with an ageless face, sits in his West Hollywood studio, which consists of a bed, a small table, some ornate decoration, and standing like a totem across from his bed, the theremin — is talking about his history, pinpointing moments where he has shown up at pivotal places, or been around important people at exactly the right time — with a Zelig-like frequency.

Ra is from an aristocratic Armenian family in Iran. While on a family vacation to the U.S. as a kid, a civil war broke out, and he wasn't able to go home. His family settled in Boston, which was unhospitable for Ra, who was just learning English, was small for his age, was not white and was also gay. "By the time I got to high school it was really bad," he says. "I was feminine and pretty. I was being bullied and tortured for being gay, and I would fight a lot because I didn't take sh*t from anybody, as small as I am. I would fight people. I got expelled from high school, because I had been suspended five times for fighting. I was always outnumbered, but finally I lost it and beat the f*** out of somebody, got thrown out of school and said 'I'm moving to New York.' "

New York in the mid-'80s was paradise. He spent a lot of time at clubs like Danceteria and Area and Pyramid, or he'd go to drag clubs and help the queens get ready backstage, enjoying the energy. "I just ended up doing drag because it was so easy," Ra says. "It was easy because I was small and my features were feminine. Also it was [about] not being Armen anymore. In hindsight, I discovered these details about that time. Like, why did I do drag? I never wanted to be a woman. I wasn't trying to always pass as a woman either. I was in an atmosphere that was all-inclusive and had all kinds of people in it. Once I did drag I realized... oh my god, everybody wants me. The same people that would call me a f** are running after me and crashing their cars. Seriously. I caused car accidents."

But "it became boring to me," he says. "I didn't see a future in it, except I was modeling a lot. I was modeling as a woman. I'm in all kinds of books and ad campaigns. Huge ones. They couldn't say I was a drag queen, and they didn't. I was just a model." Though he wasn't thinking about it that way at the time, his lie about playing the theremin was his way of moving into a new phase of life.

When he acquired his first theremin, Ra was technically homeless, though crashing at a friend's multimillion dollar mansion. He knew he'd have to buckle down and actually learn to play the instrument he'd claimed to be studying, which seemed daunting. "It was a nightmare. Oh s***. I'd already been talking about it. Even before it came, it's all I would talk about. I was obsessed," he says. "All day I was on it. I was terrified. Like, oh my god this is going to be impossible. I did manage to play some version of [George Gershwin's] 'Summertime,' which is a melody I knew really well. Nine hours I played and drove everyone insane." 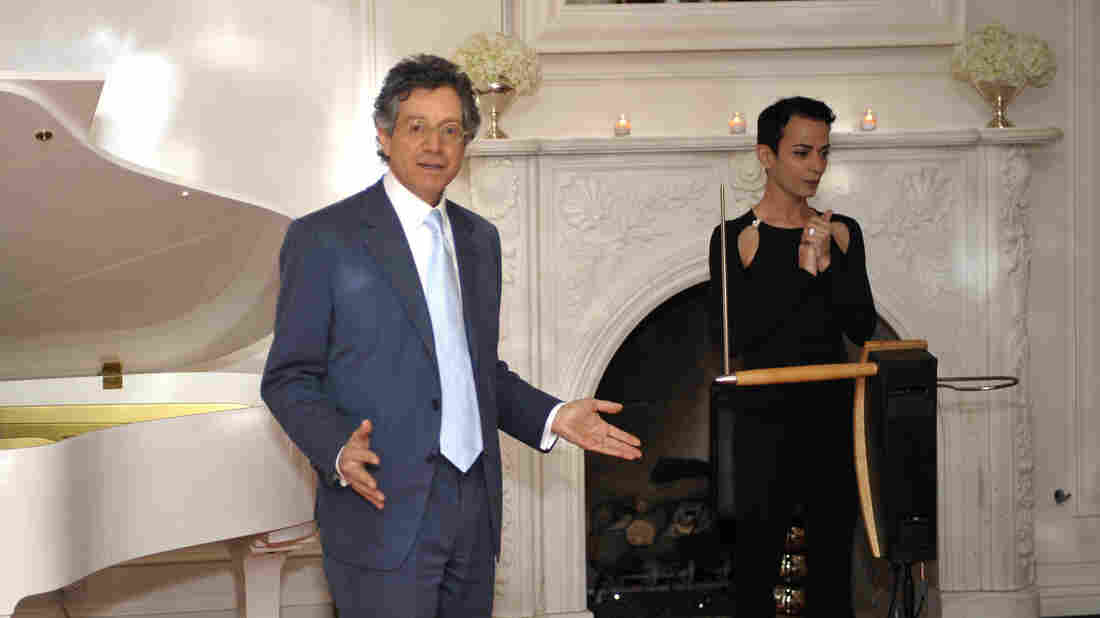 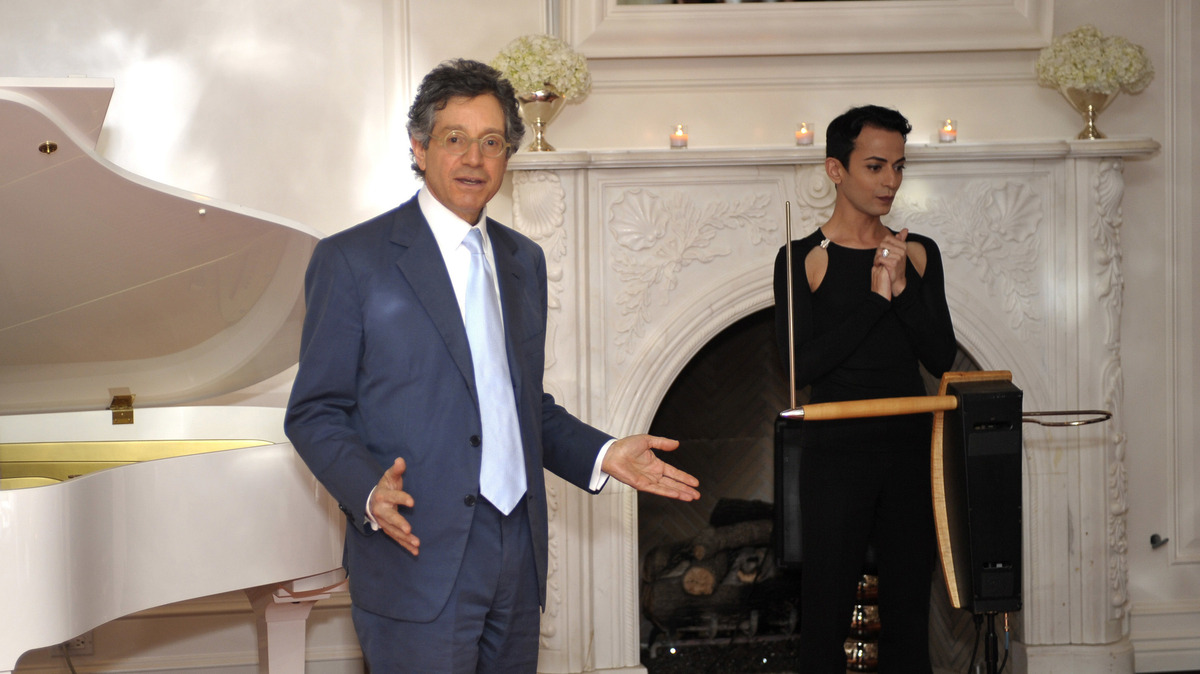 Art curator and dealer Jeffrey Deitch, left, with Armen Ra at a cocktail reception on Nov. 4, 2010 in Beverly Hills.

Ra kept playing and kept getting better, but before he could get comfortable with the theremin, ANOHNI, at the time still known as Antony Hegarty of Antony and the Johnsons, called him up and asked him to perform live with her group, just three months after Ra had gotten ahold of a theremin. Suddenly, Ra found himself onstage playing an instrument he barely knew to a packed crowd, thrust into the spotlight before he was ready. "I wasn't ready for that. I didn't want to do it. I was really just figuring it out, because there was no teacher and nobody knew anything about it, especially then." The show went well enough that it made Armen Ra one of the world's go-to theremin players. He'd done what Leon Theremin couldn't, and brought an outsider instrument into the modern world.

Ra added eerie melodies to much of Current 93's gnarled HoneySuckle Æons album from 2011. He released albums of thereminized American standards and personal Armenian favorites and, despite a disdain for modern pop music, would later cover Amy Winehouse, whose music he loved, and play on Gwen Stefani's "Naughty," as well as Selena Gomez's "Me and My Girls." He has opened for Nick Cave's Grinderman project, and collaborated with Mark Almond. But before any of that, he had to endure more pain and displacement.

On Sep. 11, 2001, when the planes hit the World Trade Center, Ra was just ten blocks away. "I went crazy," he says, putting heavy air quotes around the word crazy. "My parents were already living in LA, and my mom had to come get me from New York. It was that bad. I brought the theremin to LA with me and I stayed for eight months. All I did was practice. I didn't know what to do except play six, eight hours a day nonstop."

Armed with a repertoire of songs, Ra returned to New York almost a year later. He booked a homecoming recital at the Gershwin hotel, changing his outfit for every single song. "I was doing lots of flash and razzle-dazzle, because I was insecure about my ability to play and I had been so sequestered until then," he says. "I thought I could play but I'd lost my mind, so how could I really know?"

Lately, Ra's been following his instincts and exploring new territory by playing his theremin at sound healing ceremonies around LA. It allows him to focus on playing without worrying about how he's coming off. Everyone's laying down, and a lot of people are asleep, so most people aren't even looking at him. It's freeing. "I don't make mistakes because there is no mistake and I have nothing to be nervous about," he says. "Initially I was concerned if it was effective or not for the audience. That's the whole point of doing this... to release people from themselves for an hour."

A song by Current 93 on which Armen Ra appears.

So much of what Armen Ra tells me during our time together boils down to chance or accident. A civil war kept him in America. A small lie at a party sparked a massive life change. Trauma made him understand that he'd dedicated himself to a strange instrument that is still, to this day, largely written off as a curiosity. There's never really a moment where he decisively decides to do anything, which is part of his magic as a player and a person. But why the theremin, of all instruments? Why not, say, the french horn, or the accordion, or the marimbas? Then I remember a story he told about being a kid in Iran. "I had piano lessons and I had violin lessons, but I didn't have any interest in them," he said. "I wanted to be a singer. I wanted to be a great voice, which I'm not. I don't even have a good voice. Childhood pipe dream. I wanted to be a movie star, but like Greta Garbo. Totally not at all dealing with reality. I either wanted to be Garbo or, like, Maria Callas. Didn't happen! Needless to say."

Except it kind of did. Armen Ra's theremin acts has voice, and you can almost see that voice moving through him when you watch a video of him standing behind his theremin, eyes closed, decked out in a gargantuan, glittering necklace that looks like a bolo tie, delicate eyelashes curved toward the ceiling as he holds thin air taut like a wire and coaxes a ghostly audio signal out of nothing, controlling soundwaves with just a twitch of his steady hand.