Accessibility links
'American Poison' Aims To Show How Race Is At the Root Of America's Problems Journalist Eduardo Porter has written a book that cuts to the root of racism, tracing it from slavery, Jim Crow, and segregation — and bringing it to today — with unblinking honesty and facts.

'American Poison' Aims To Show How Race Is At The Root Of U.S. Problems

'American Poison' Aims To Show How Race Is At The Root Of U.S. Problems 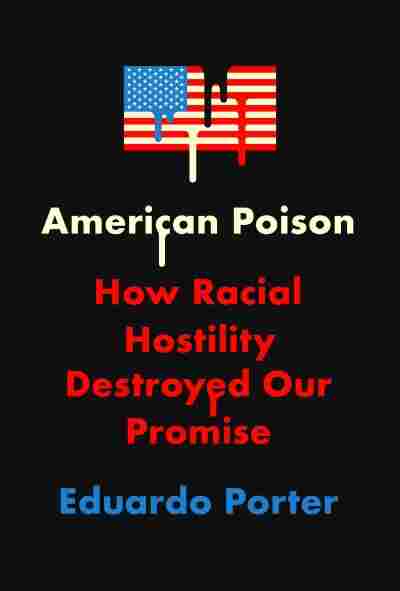 How Racial Hostility Destroyed Our Promise

When journalist Eduardo Porter moved to Los Angeles in the 90s and started writing about the city, he realized race was everywhere — and that it determined "where you go to school, church, or work; how you dress and talk; whom you marry; how you fare when you run into the cops."

That realization became the seed of his latest book, American Poison: How Racial Hostility Destroyed Our Promise.

The book explores how racial boundaries shape American institutions and traces the history of the United States through the lens of racism. In doing so all the way to the present, Porter demonstrates how the fear of immigrants that was "lying dormant in America's subconscious propelled Trump to the presidency."

American Poison kicks off with a discussion of the atmosphere that led to Donald Trump's win. According to Porter, there was a "mix of contempt and resentment across frontiers of religion, race, ethnicity, and citizenship" that was directly responsible for Trump's "seduction of sixty-three million voters." That's a strong claim, but Porter did his research and this book proves — via history, politics, and something akin to an academic literature review — that racism has played a huge role in shaping American politics since the birth of the nation. As Porter states, racism "defines who we are."

Porter's training as a journalist, he is an economics reporter for The New York Times, works in his favor in this book. The writing is clear and straightforward, and the variety and quality of sources is outstanding. In fact, one of the few flaws in this book, and I'm being nitpicky here, is that some passages resemble a literature review in an academic paper. That said, this isn't a book that invites the start of an argument about the role of racism in shaping this country; this is a book that cuts to the root of racism, traces it from slavery, Jim Crow, and segregation and brings it all the way to today with unblinking honesty and facts. The result is a hard-hitting narrative that exposes the rotten core of this country, a core that has been affected by bigotry and xenophobia every step of the way.

The amount of statistics, sources, and attention to detail in American Poison is superb. Porter pays attention not only to events but also to what they meant. For example, he discusses how Barack Obama's rise to the presidency allowed white voters to "convince themselves that racial discrimination against African Americans was a thing of the past." Then, he shows that past in subsequent chapters as he explains rampant racism in industrial unions, the role politicians played in maintaining segregation, the creation of the welfare state, and how institutions like the armed services discriminated openly:

"In 1940 there were forty-seven hundred blacks in an army half a million strong. There was not a single black in the U.S. Marines, the Tank Corps, the Signal Corps, or the Army Air Corps. Blacks were trained in segregated camps and assigned support duties, like digging ditches and cooking."

From welfare to anti-lynching laws, there's nothing Porter refuses to tackle, and that makes American Poison an uncomfortable read — and one that should happen in every school in the country. While the United States has built a discourse about its superiority, Porter incisively points out its plethora of weaknesses:

"Take a pick of virtually any measure of social progress over the last four decades, and you will find that for all its claims to greatness the United States in fact lags the rest of the industrialized world. It may still be the undisputed leader in terms of military might, economic growth, and technological innovation, but when it comes to measures of social health and cohesion, the portrait of the American experience is alarming."

The deconstruction of the superiority discourse is sharp and hard to swallow. So are some of the points Porter makes, especially for those who have trusted what mainstream media and politicians have led them to believe. For example, we often hear how minorities syphon Social Security. That's not the case, according to Porter. Minorities, explains Porter, still get "a raw deal from Social Security, typically receiving more meager payouts than whites, even though they are more likely to suffer poverty in old age." Blacks for example, die younger than whites because the healthcare and education systems have failed them and because they are more likely to end up in jail. Similarly, Hispanics contribute to a Social Security system that is "less generous than the one that uses their payroll taxes to provide benefits to mostly white retirees."

American Poison is a devastating, brutally honest, wonderfully researched read. It is also necessary and incredibly timely. From its discussion of how racism affects everything to its invitation to African Americans and Hispanics to unite and battle it together, Porter has crafted a narrative that ultimately becomes a statement: What we've done so far is wrong, and it's time to change it.