Accessibility links
Opinion: I'm An American Stuck In Peru, On Lockdown Amid Coronavirus Outbreak Journalist Dylan Baddour is among the thousands of Americans in Peru waiting to return to the United States during the coronavirus outbreak.

Opinion: I'm An American Stuck In Peru — Glad To Be On Lockdown To Avoid COVID-19

Opinion: I'm An American Stuck In Peru — Glad To Be On Lockdown To Avoid COVID-19 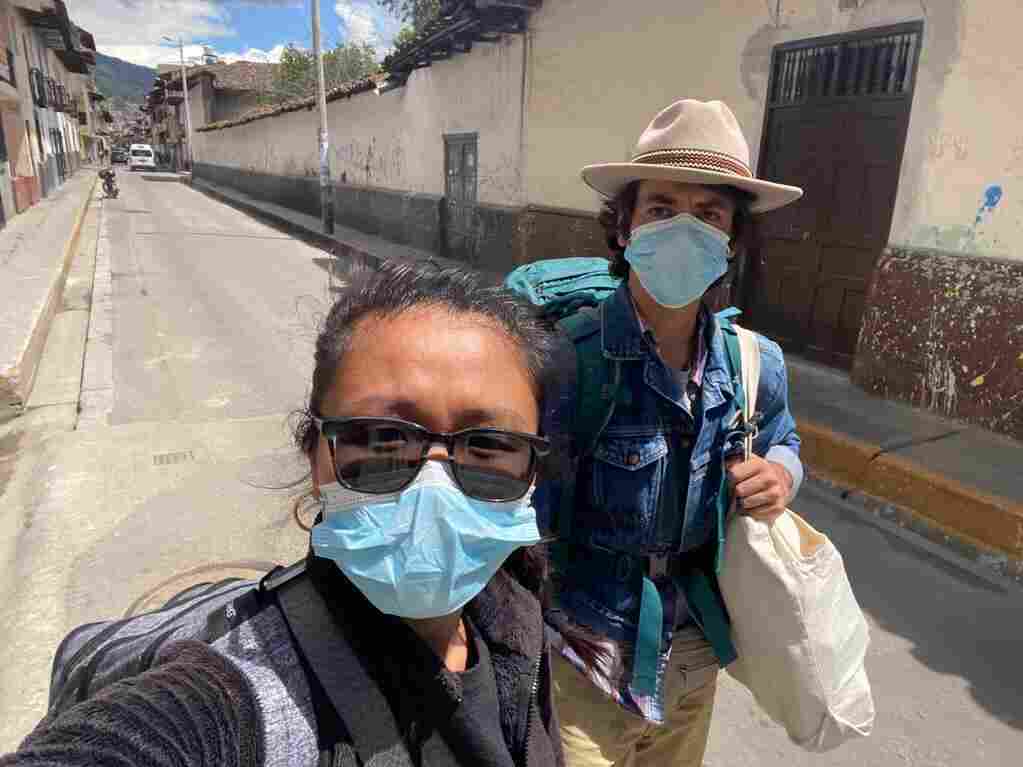 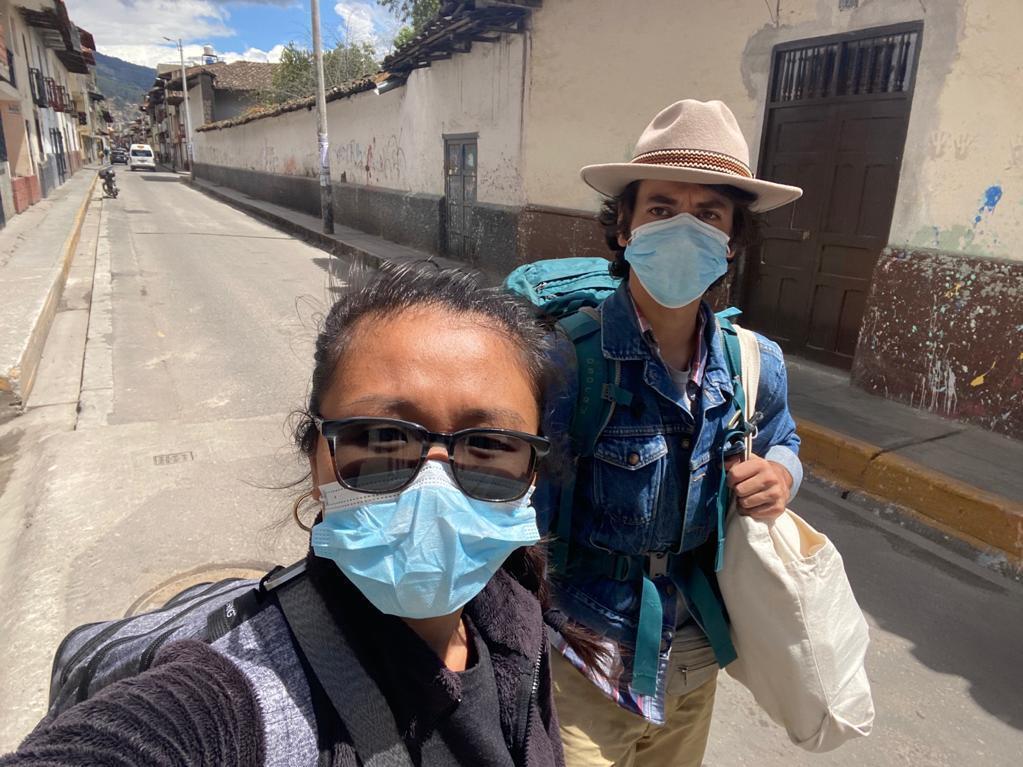 Pu Ying Huang (left) and Dylan Baddour walk along an empty street in Cajamarca, Peru, on March 18, while they were moving from a small hotel room to an Airbnb to ride out the country's 15-day lockdown.

Dylan Baddour is a freelance journalist covering South America who is now stuck in Cajamarca, Peru, because of the coronavirus outbreak.

It was time to give up our adventure and head home to Texas. Every village in the Peruvian highlands was buzzing with talk of the spreading coronavirus. South American countries were starting to close their borders.

So my partner, Pu Ying Huang, and I headed out of the Peruvian countryside and into the small city of Cajamarca, where we hoped to quickly find a flight home. But when we got there at night on March 16, it was too late.

Peruvian President Martín Vizcarra had just declared a total quarantine for 15 days, halting all air and land transportation, even taxis. With fewer than 150 cases of coronavirus identified at the time, the Andean country was immediately going into lockdown to stem the spread of the virus. (As of Tuesday, Peru — with about 32 million people — has identified 395 infection cases and five deaths from COVID-19, the disease caused by the virus.)

Suddenly, we were among the thousands of Americans stuck in Peru.

Police guarded the bus terminal, prohibiting departures. Hotels shut. Desperate to get indoors for the night, we were saved by a woman who waved us into her small family hotel.

The next morning there were soldiers with masks outside and police cars patrolling with loudspeakers that repeated, "This is an emergency, please stay in your homes." One day later, Pu and I moved into an Airbnb with a kitchen and stocked up on groceries to hunker down.

A Facebook group popped up for Americans stuck in Peru and more than 2,300 people put their names on a Google Doc that circulated to register us. While my partner and I felt fine, some others wrote that they were running low on medication or needed to get home to their work or family. Whereas countries including Colombia, Mexico, Israel and France chartered flights to get their people out of Peru, the Americans could not make contact with our embassy. 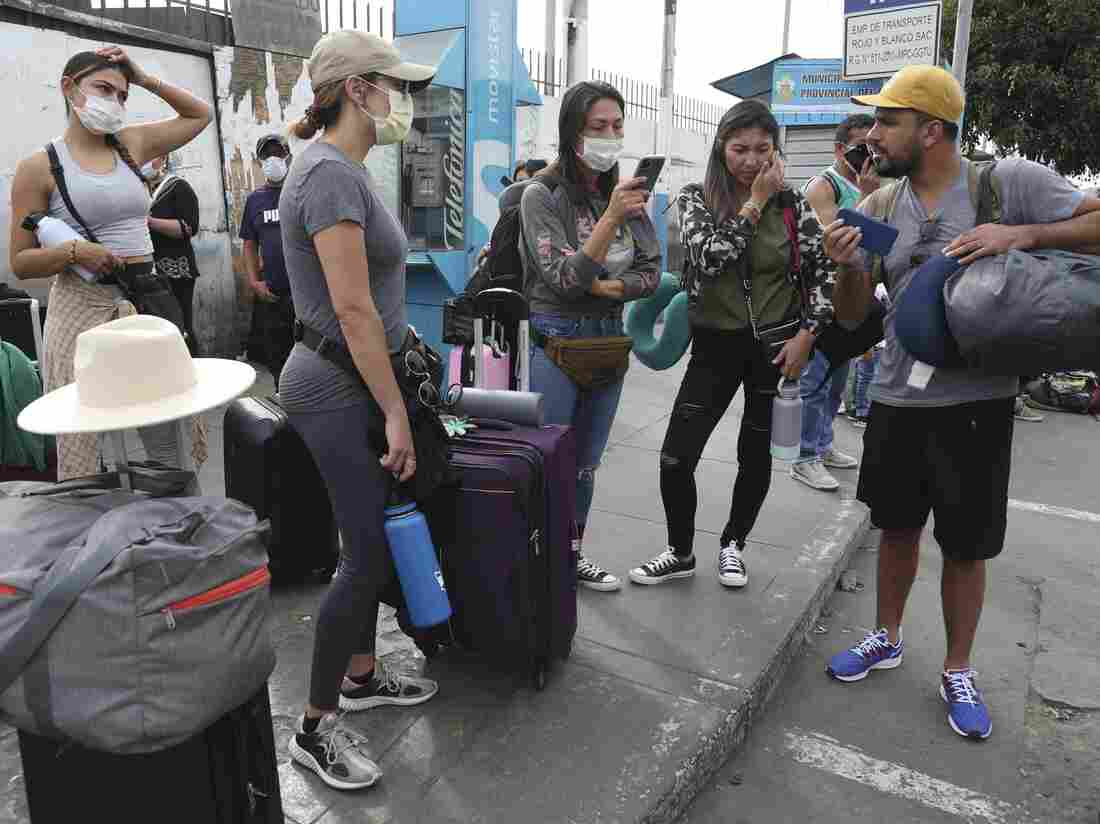 Tourists from the United States wait outside the closed Jorge Chavez International Airport for a member of the U.S. Embassy to escort them to a flight back to the U.S., in Callao, Peru, on March 20. It was the fifth day of a state of emergency decreed by Peru's government to prevent the spread of the new coronavirus. Martin Mejia/AP hide caption 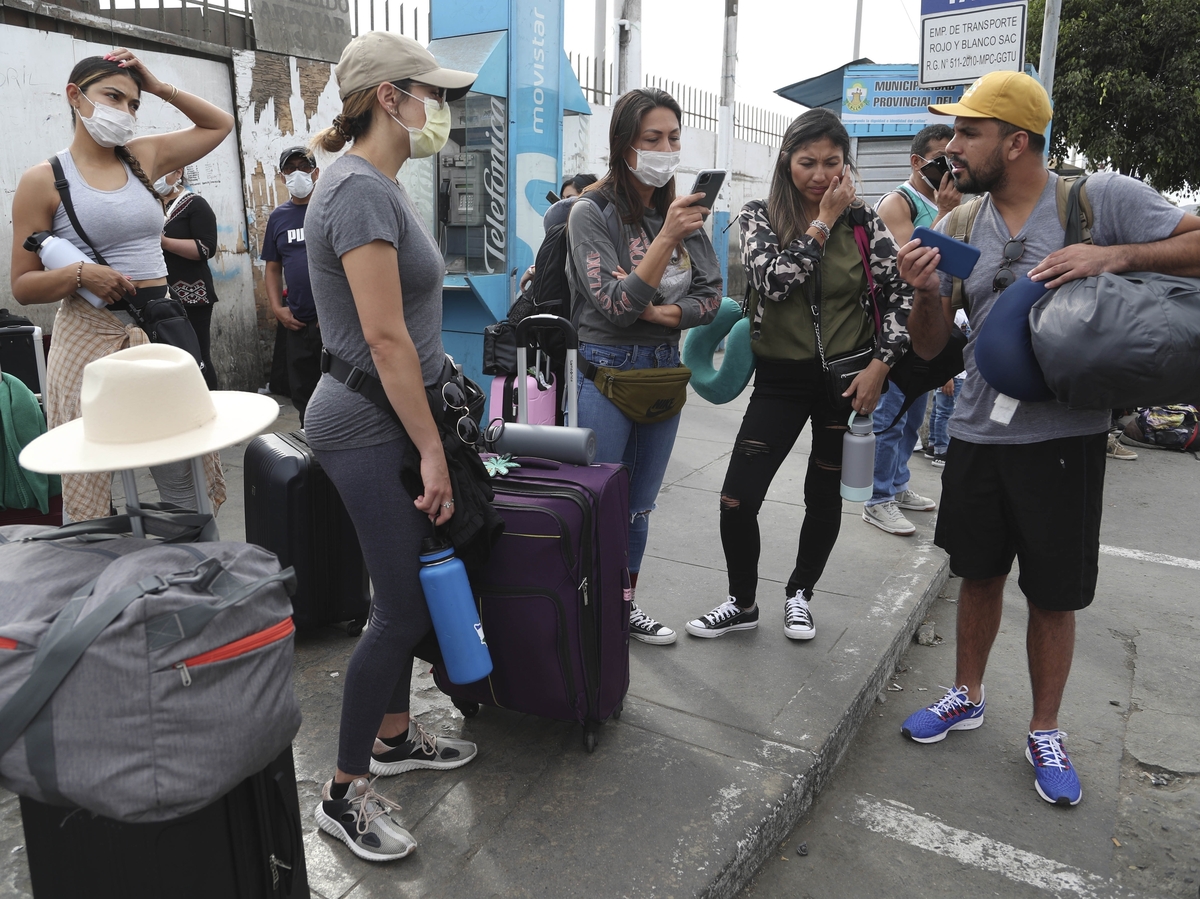 Tourists from the United States wait outside the closed Jorge Chavez International Airport for a member of the U.S. Embassy to escort them to a flight back to the U.S., in Callao, Peru, on March 20. It was the fifth day of a state of emergency decreed by Peru's government to prevent the spread of the new coronavirus.

"We are calling the embassy every single day and no one is answering the phone today. Seems as if everyone's left already," wrote one of the group members on Friday. Others expressed outrage over the limited information they were receiving.

Starting this weekend, the U.S. State Department has helped evacuate 700 of the more than 5,000 Americans in Peru since the weekend, according to the Embassy. On Monday, U.S. Chargé d'Affairs in Peru Denison K. Offutt said via Twitter that the remaining U.S. citizens in the country should stay where they are and await outreach from the Embassy. But on Tuesday, the Embassy said the repatriation effort was delayed because of problems obtaining permission from Peru to land planes.

We have followed the daily White House briefings, where U.S. leaders often insisted what a great job they were doing but stopped short of announcing a national lockdown. The U.S. suspended incoming flights from China and Europe. By now individual states and cities have closed public schools and some businesses, urging residents to isolate themselves.

By contrast, on Friday in Peru, President Vizcarra addressed his nation in a speech that sent his popularity skyrocketing. He insisted on the urgency of the quarantine, then chastised those Peruvians who disregarded it and the local authorities who didn't enforce it "with the strictness this situation requires."

He said he had designated about $30 million to acquire 1.4 million Chinese coronavirus tests to locate and isolate outbreaks. (He later said 330,000 would arrive on March 27 and the rest in April.) Seven 20-story towers on the main avenue of the capital city, Lima, would be turned into a 3,000-bed emergency hospital. Three million poor families were identified to receive immediate cash assistance as the quarantine kept them from work.

Vizcarra dismissed and replaced his health minister, saying the situation required someone with particular expertise in public health and viral infections.

Early on, TV news broadcast scenes of workers protesting over being forced to stay home and sacrifice their daily income. However, experts commenting in the media seemed unanimous in acknowledging the need of the drastic quarantine to avoid a national outbreak.

In the next few days, TV news showed images of residents on their apartment balconies cheering on police and public health enforcers in the streets. 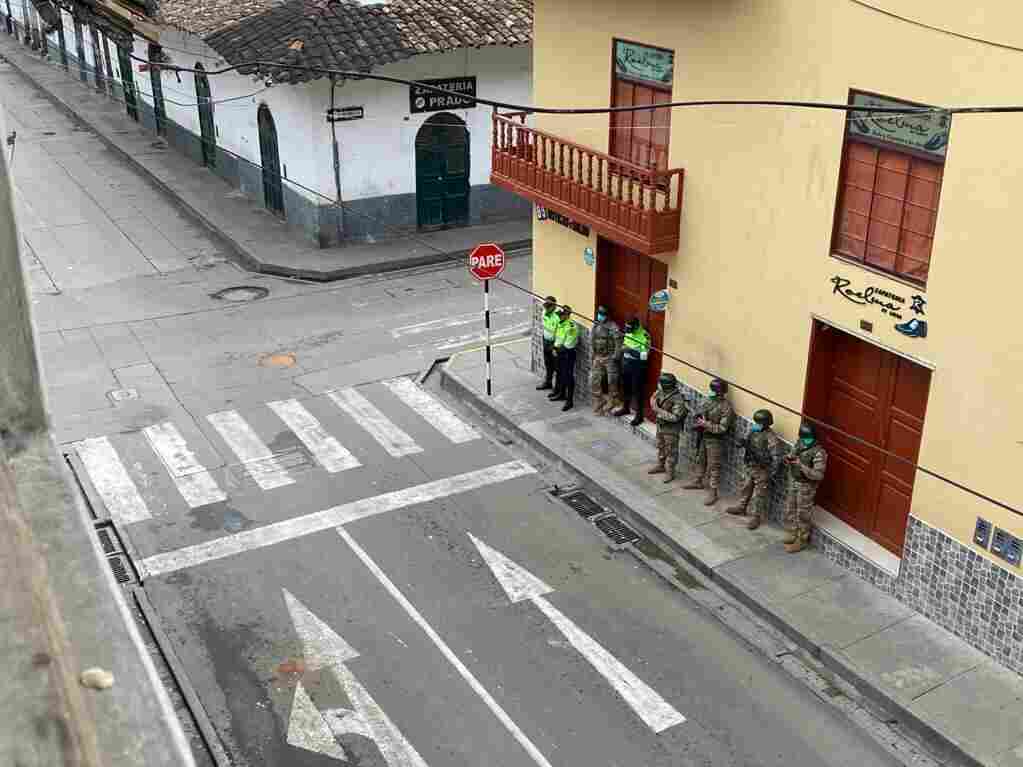 Peruvian military police enforce the quarantine on March 17, a day after Peruvian President Martín Vizcarra's orders of a national lockdown to halt the spread of the coronavirus. Dylan Baddour for NPR hide caption 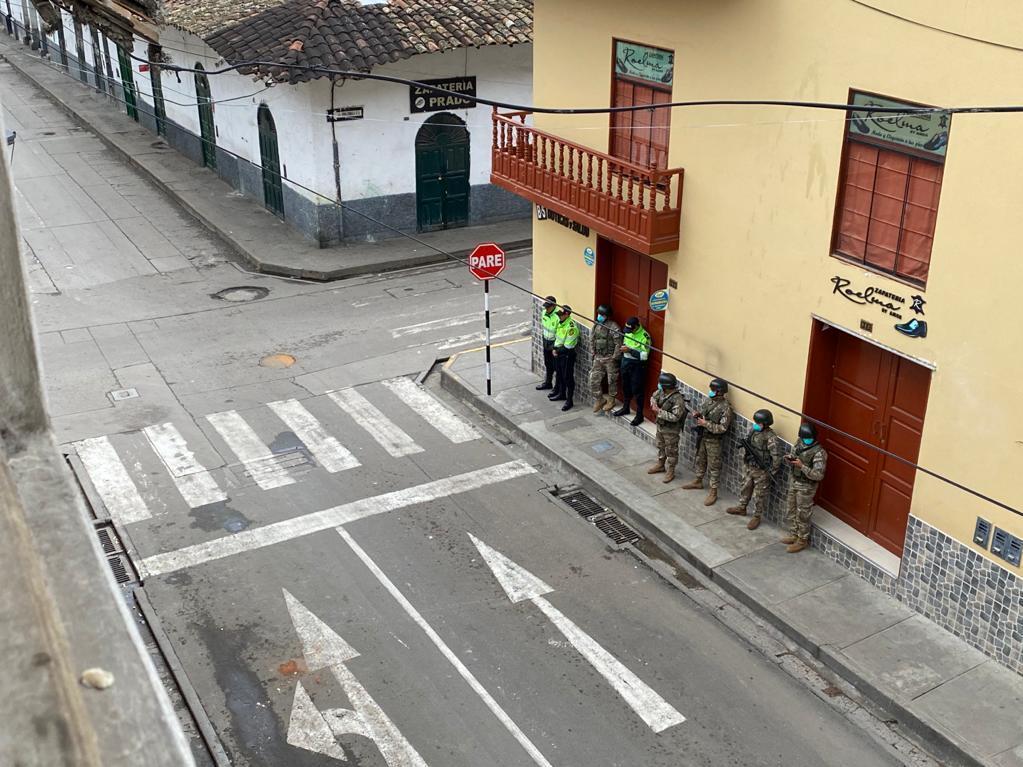 Peruvian military police enforce the quarantine on March 17, a day after Peruvian President Martín Vizcarra's orders of a national lockdown to halt the spread of the coronavirus.

Some neighboring nations followed the cue: Colombia and Argentina went into total quarantine when they each had fewer than 200 identified cases of coronavirus at the time. (As of Tuesday, Argentina has identified 301 cases and four deaths and Colombia reports 306 cases and three deaths.)

We remain 14 hours away from Lima down highways blocked by the military. When we poked around for underground transportation in that direction, Peruvians seemed not to like our efforts to undermine their quarantine. All advised us firmly to wait until the lockdown was lifted.

What scares us most is the life we may encounter when we get to the U.S.

Peru's swift shutdown of intercity travel is likely to help reduce the spread of the virus.

The government's actions, the nation's solidarity and seriousness of its approach have raised our hopes that the quarantine will expire as planned on March 31, and the disaster will be controlled enough to permit limited travel for folks like us to return home.

At least the measures here mesh with the lessons The New York Times drew from a study of Italy, the new epicenter of the virus: "that steps to isolate the coronavirus and people's movement need to be put in place early, with absolute clarity, then strictly enforced."

U.S. infections have surged each day yet the federal government has remained reluctant to impose drastic actions. Other countries such as Italy and Spain have enforced quarantines, but too late to stop COVID-19 from ravaging them.

Our friends and families in the U.S. have said we may be better off in Peru. Still, we feel this is the time to be with our families and we hope to get home.

When we do get out, what scares us most is the life we may encounter when we get to the U.S.