Accessibility links
Climate Change Push Fuels Split On Coronavirus Stimulus Clean energy groups have their own wish list for the massive coronavirus stimulus bill. They say the country's ability to tackle climate change is at stake. 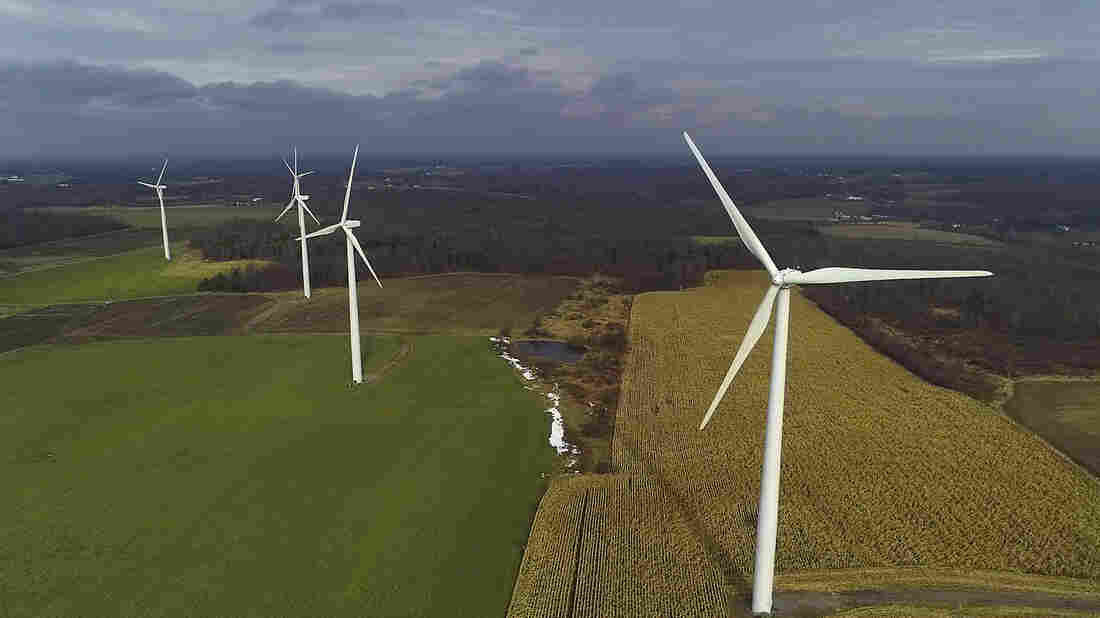 Clean energy advocates say economic disruption over the Covid-19 pandemic threatens tens of thousands of jobs and billions of dollars of investment in wind and solar. Above, wind turbines in Warsaw, N.Y. Julie Jacobson/AP hide caption 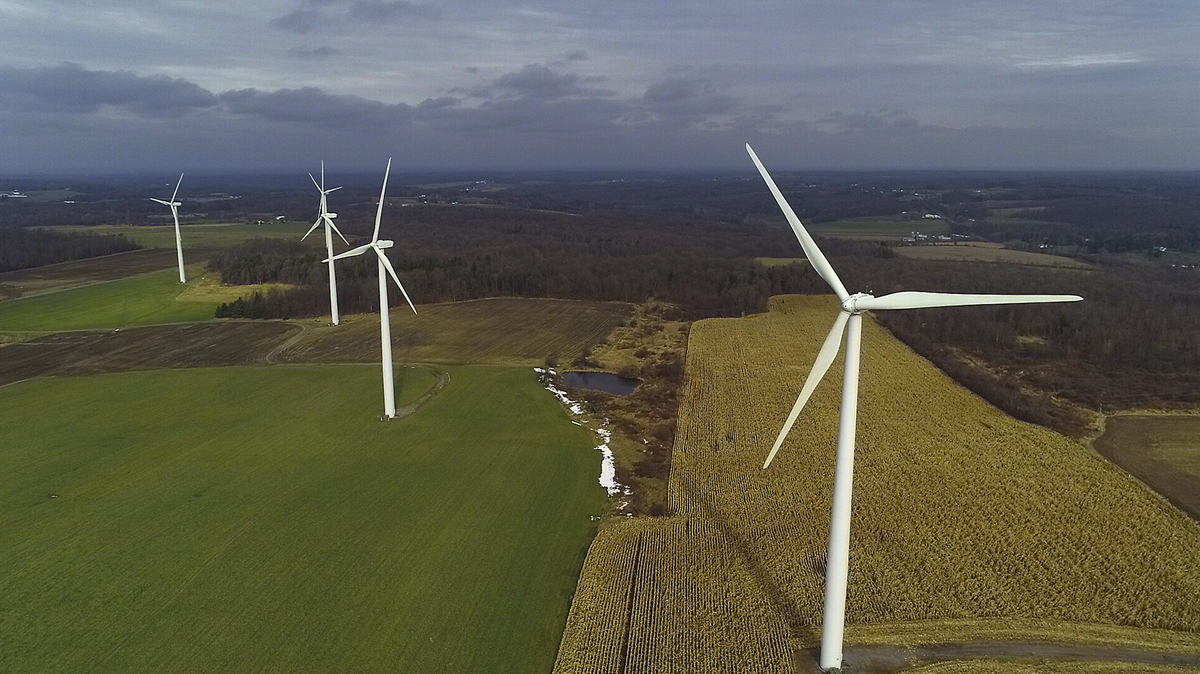 Clean energy advocates say economic disruption over the Covid-19 pandemic threatens tens of thousands of jobs and billions of dollars of investment in wind and solar. Above, wind turbines in Warsaw, N.Y.

Clean energy and climate advocates say the huge stimulus bill Congress is negotiating should address not only the economy, but also climate change. But a split over that appears to have contributed to delays in passing the bill.

"Democrats won't let us fund hospitals or save small businesses unless they get to dust off the Green New Deal," Senate Majority Leader Mitch McConnell said Monday.

McConnell said Democrats were filibustering the $1 trillion-plus bill hoping to include policies such as extending tax credits for solar and wind energy.

The share of solar and wind energy in the U.S. had been booming. But now, without help, the SEIA estimates the solar industry could see as much as 50 percent of residential solar jobs lost this year due to the pandemic. AWEA estimates $43 billion dollars of investments and payments, mostly in the rural communities where wind projects usually are built, is at risk.

McConnell says this is the wrong time to debate policies like these, and the focus should be on addressing the effects of the pandemic. But others argue now is precisely the right time to think about climate change.

We can both stimulate the economy ... and we can lay the foundation for a lower-carbon future.

"We can both stimulate the economy ... and we can lay the foundation for a lower-carbon future," says economist Michael Greenstone, who served as the Chief Economist for President Obama's Council of Economic Advisers.

In addition to renewable energy tax credits, Greenstone says the federal government should invest in electric vehicle charging infrastructure and deploying batteries to store electricity from intermittent sources like the sun and wind.

Advancing clean energy was a major focus of President Obama's stimulus plan after the 2008 economic downturn.

So far, renewable energy advocates have struggled to get their priorities included in the Senate's current stimulus legislation, even as help for the oil industry is showing up in draft versions.

The Trump administration wants $3 billion from Congress to fill the nation's Strategic Petroleum Reserve. That would help oil drillers hit hard by a price war between Saudi Arabia and Russia. That's leading to a glut of oil on the market just as the coronavirus is reducing demand because people have stopped traveling.

The combination of a supply surge and demand decline sent crude prices down by more than half in the last three weeks.

Energy Secretary Dan Brouillette says his agency will buy up to 77 million barrels of domestic crude from small and midsize drillers. They are most at risk because many have borrowed money to expand and may now face bankruptcy.

"These businesses have been particularly hard hit by recent events, but under President Trump's leadership we are taking swift action to assist hard hit producers and deliver strong returns to the taxpayer," says Brouillette.

Industry analysts say it makes sense for the government to fill the reserve when prices are low, but environmental groups were quick to criticize the move.

The American Petroleum Institute (API), the oil industry's largest trade group, has said it doesn't want government intervention in the oil market. But outside the stimulus bill process the API is asking for temporary relief from some regulations.

"Large-scale investment to boost the development, deployment and integration of clean energy technologies — such as solar, wind, hydrogen, batteries and carbon capture (CCUS) — should be a central part of governments' plans because it will bring the twin benefits of stimulating economies and accelerating clean energy transitions," wrote Birol in a recent commentary.

Otherwise, Birol says, carbon dioxide emissions — which have dropped off amid the pandemic — will rebound when economies recover.

We don't want to bail ourselves out of one economic crisis and one health crisis and go straight into the next one.

"We don't want to bail ourselves out of one economic crisis and one health crisis and go straight into the next one," says Helen Mountford, vice president for climate and economics at World Resources Institute.

Mountford is among those offering some creative ways to both boost the economy and address climate change. She suggests a big tree-planting program could start as early as this summer.

"[It] could actually put something like 150,000 people to work and will help pull millions of tons of carbon dioxide out of the atmosphere in years to come," says Mountford.

In his State of the Union address this year President Trump said the U.S. would join a global push to plant a trillion trees.

The nuclear power industry has its own wish list for the current stimulus bill.

The Nuclear Energy Institute has asked the Trump administration to temporarily waive fees for nuclear power plants. The trade group also asked for grants from the Energy Department to pay for COVID-19-related leave for those working on the Vogtle nuclear power plants under construction in Georgia.

The group says the grants are needed to defray the costs of paid leave and ensure the workforce is available to continue working on the project in Waynesboro, Ga., later.

It's not yet clear which, if any, of these requests will make it into a final stimulus bill. But given the significant effect the coronavirus pandemic is having on the U.S. economy, this likely won't be the last stimulus package lawmakers will consider.