Accessibility links
Georgia Primary Postponed, Frustrating First-Time Voters It was supposed to be primary day in Georgia on Tuesday. Students and youth organizers in states with delayed elections are feeling frustration and determination in their fight to boost turnout. 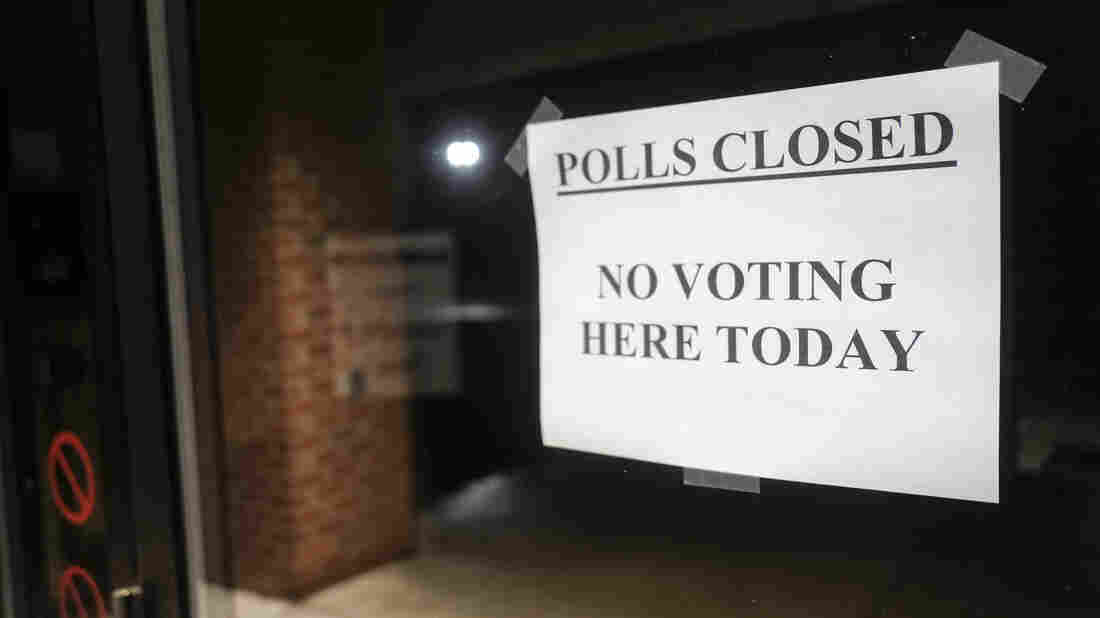 Polling stations throughout Ohio were shut down on March 17 as Gov. Mike DeWine called for the state's primaries to be pushed back to June. That leaves many young voters in the state waiting for their first chance to participate in an election. Matthew Hatcher/Getty Images hide caption 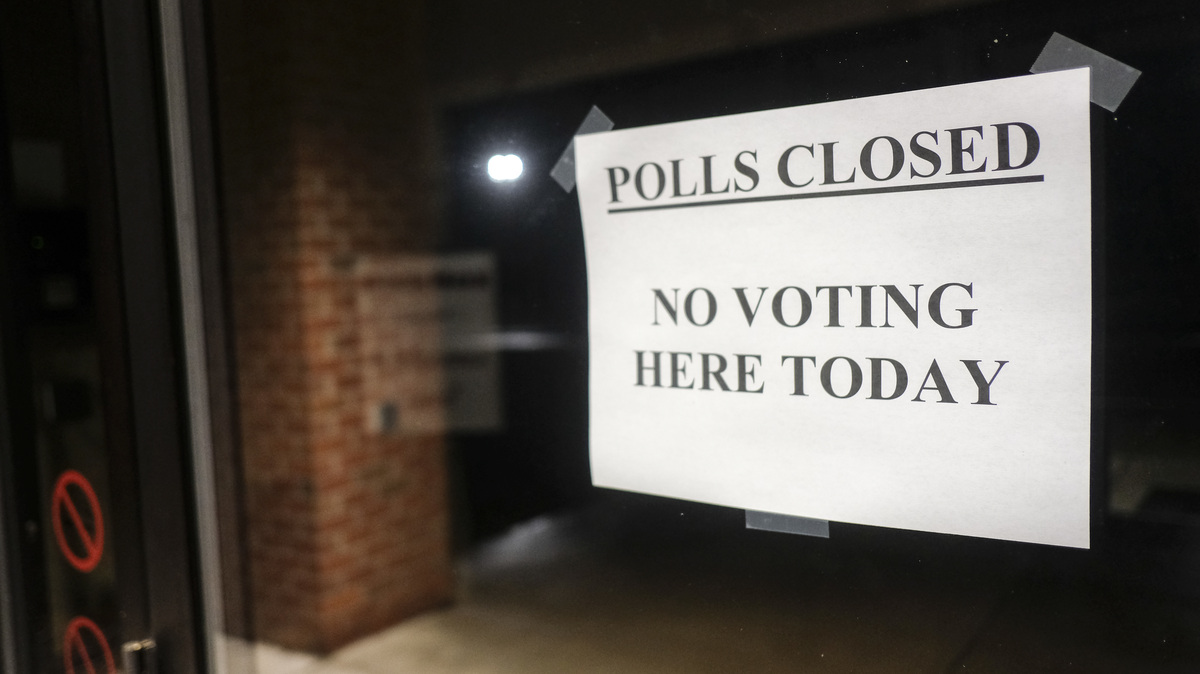 Polling stations throughout Ohio were shut down on March 17 as Gov. Mike DeWine called for the state's primaries to be pushed back to June. That leaves many young voters in the state waiting for their first chance to participate in an election.

Jaylan Scott was in the middle of planning an upcoming event for the Young Democrats of Georgia when he found out his state's primary was postponed.

Scott first voted in the 2018 midterm elections but has yet to participate in a presidential election. He's a supporter of Vermont Sen. Bernie Sanders, but says he'll vote for former Vice President Joe Biden if he is the Democratic nominee.

"I would say I'm excited, but this cycle has been a lot more toxic than others than I've been old enough to witness and be a part of. So I was just ready to get it over with, honestly," he added.

The Georgia presidential primary was originally set for Tuesday but has been postponed to May 19, a delay happening in many states that have yet to vote. It's especially significant to politically active young voters taking part in the first presidential election of their lifetimes. For many college students, it's compounded with packing up to leave campus, moving home and starting online classes, making their efforts to increase turnout and organize in their communities even more complicated.

To Ohio State University freshmen Leticia Nketiah and Maggie Kaniecki, both members of the College Democrats, Ohio's primary delay seemed like a disappointment more than anything else.

"People believe or feel as if COVID-19 has ruined quite a bit for them," Nketiah said while sitting in her college dorm room that she had recently been told to move out of.

"I feel like it's very hard to be election-centered right now," Kaniecki said, who had already moved out of her dorm room and is back home with her parents, one of which is a doctor and works in a hospital while the other is an immuno-compromised person and is working from home.

Kaniecki says she understood why the primary was delayed but added, "it is disheartening."

With students across the country packing up their things, the bitterness about ending their in-person school year early can go hand-in-hand with delays to the primary.

"I feel like being on a college campus, voting is like a whole different type of atmosphere. It's like we have to vote," Nketiah said, explaining that OSU makes up a sizable portion of Ohio's 3rd Congressional District.

Scott echoed a related concern for Georgia State University students, arguing that many of his peers registered to vote near school instead of their hometowns and may not have all the correct information on how to vote absentee.

"I just think it's going to make it really, really hard for more young people to vote. If you, you know, kind of displace them back to places that they're not even registered to vote in," Scott added.

That said, Mario Calcagno, a freshman at Georgia State University and a member of the group GSU for Sanders, argues that turnout would be negatively affected regardless because of the pandemic.

"If people don't feel like they're gonna be safe going out to vote, it's really going to be a mixed bag on how people are going to turn out," Calcagno said, agreeing with Georgia's decision to delay the primary.

"I know it's already hard enough to get young people to turn out to vote. And with all of this going on, I don't think it would have made it easier to keep it on the primary date," Calcagno added.

As a leader of the Young Democrats of Georgia, Scott is still planning ahead.

"I believe that this gives us a lot more time to, you know, organize and mobilize and get even more people out to vote, and also contact people who were going to vote before and just tell them, hey, if you haven't voted, it's time to go vote." Scott said.

Hundreds of miles away in Maryland, students are having similar conversations with their primary delayed from April 28 to June 2.

"We're still trying to keep the momentum going, you know, even from our rooms in our houses" said Evelina Sarapi, a sophomore at Towson University in Baltimore County. Towson students have also been asked to move out of their dorms and start online courses. 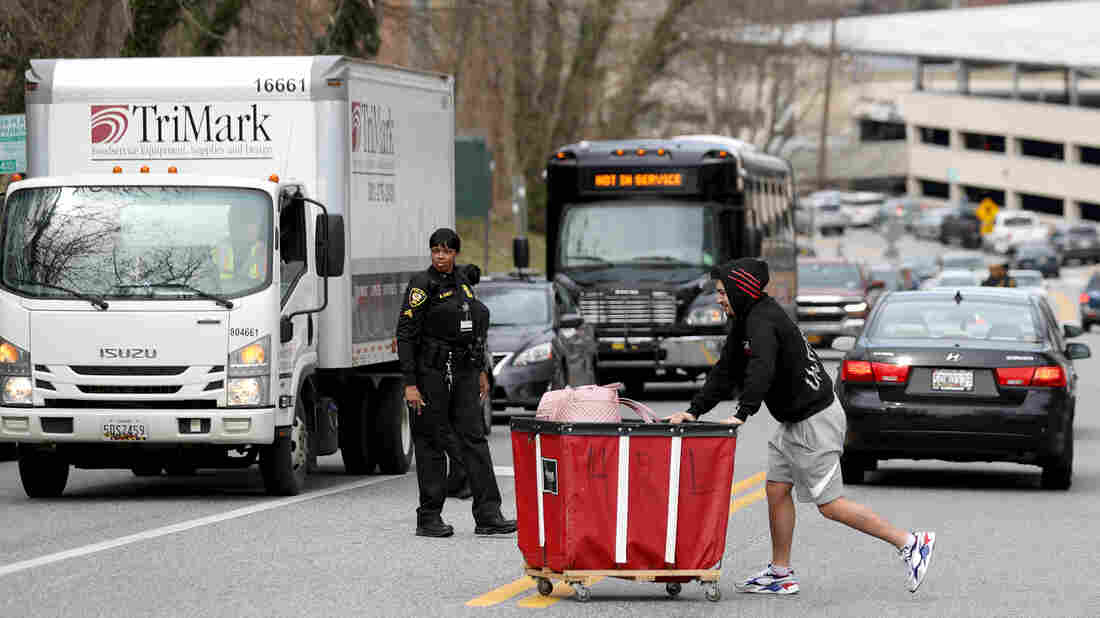 A Towson University student removes belongings out of the dorms as the school shut down days before the start of the scheduled spring break on March 11 in Towson, Maryland. Rob Carr/Getty Images hide caption 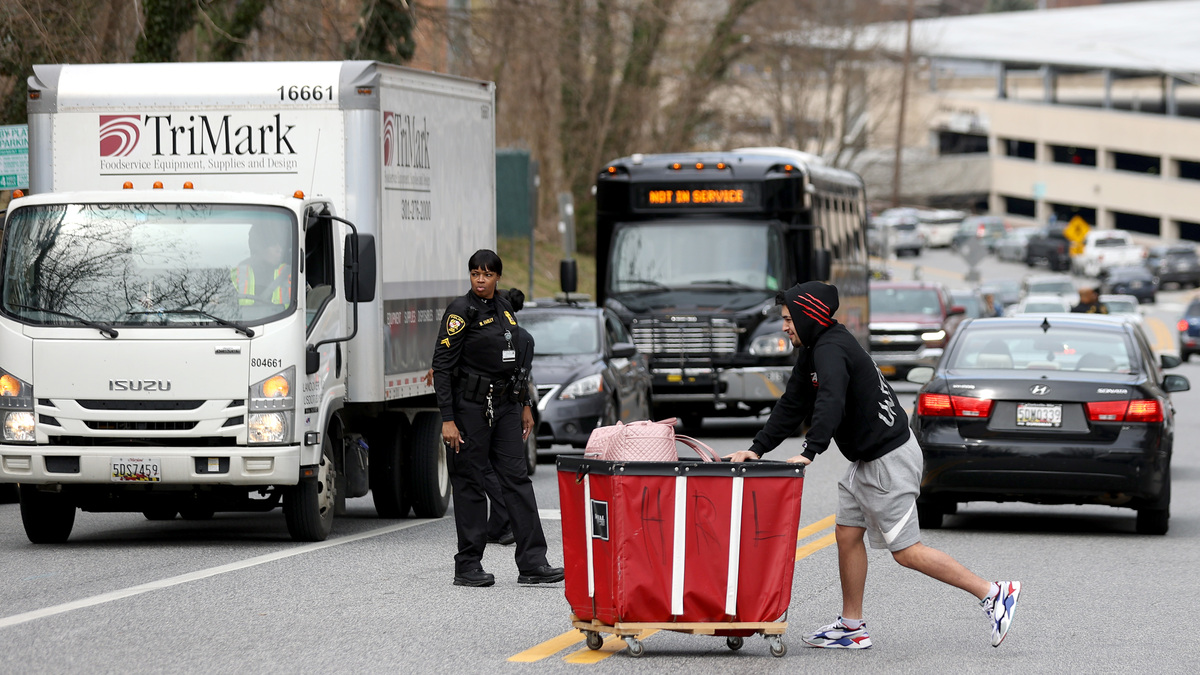 A Towson University student removes belongings out of the dorms as the school shut down days before the start of the scheduled spring break on March 11 in Towson, Maryland.

Sarapi is president of her school's College Democrats organization, and her group is still meeting once a week online to continue working on increasing voter turnout and registration in the area, despite the date of the primary being changed.

"We would meet every single week on campus but now we're going to be doing virtual meetings just so you know, we can keep the momentum going and be able to actually plan something."

For Sarapi, Maryland's primary delay has an added weight.

"Voting in your first presidential election, that is something major and especially for me. I'm an immigrant. I got my citizenship three years ago. So that was something I was really looking forward to, voting for the first time in this country," Serapi said.

"I would say I was sad, but it's the best we can do right now to prevent the spreading of this virus even further," she added.

In addition to the three states of Maryland, Georgia and Ohio — Indiana, Louisiana, Kentucky, Connecticut, Alaska, Hawaii, Wyoming and Puerto Rico have all officially delayed their presidential primaries as well due to the COVID-19 pandemic.

As Americans remain at home, that number is expected to continue growing, with multiple states including New York and Pennsylvania, discussing primary delays as well.