Accessibility links
With Transportation Industry In Trouble, Workers Wait For Federal Aid Package Airlines say they will likely have to lay off thousands of workers if Congress can't pass a coronavirus economic relief package soon. Amtrak, bus lines and subways are suffering, too. 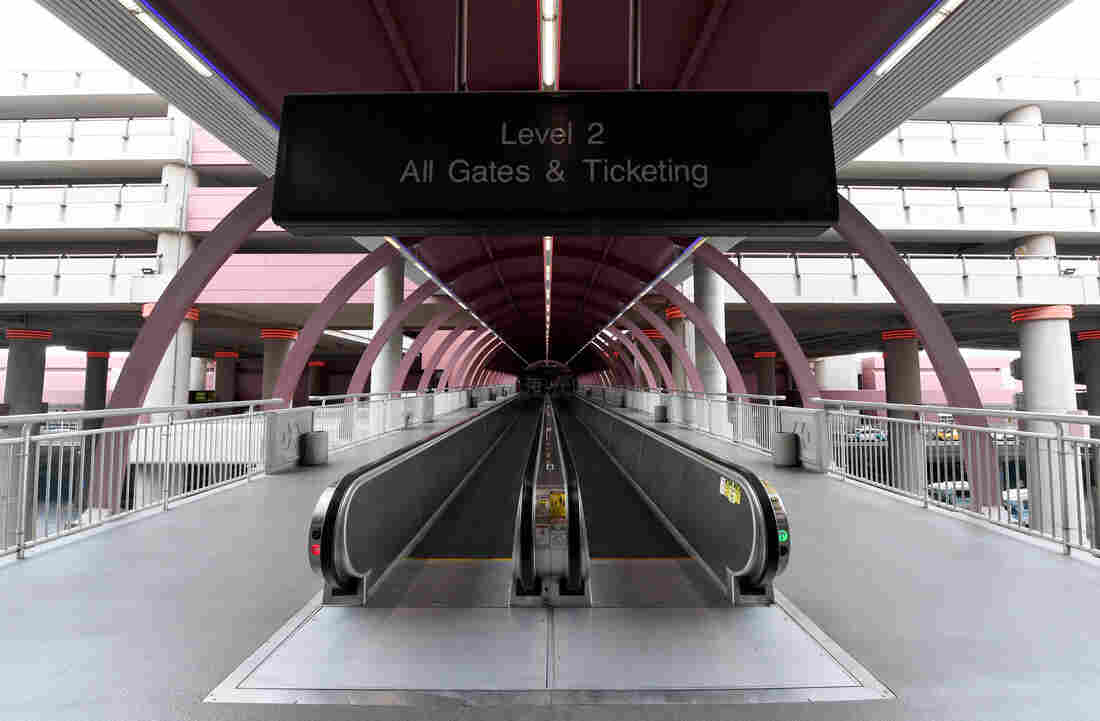 Airlines say they will likely have to lay off thousands of workers if Congress can't pass a coronavirus economic relief package soon. Amtrak, bus lines and subways are suffering, too. Above, an empty walkway at Las Vegas' McCarran International Airport on March 19, 2020. Ethan Miller/Getty Images hide caption 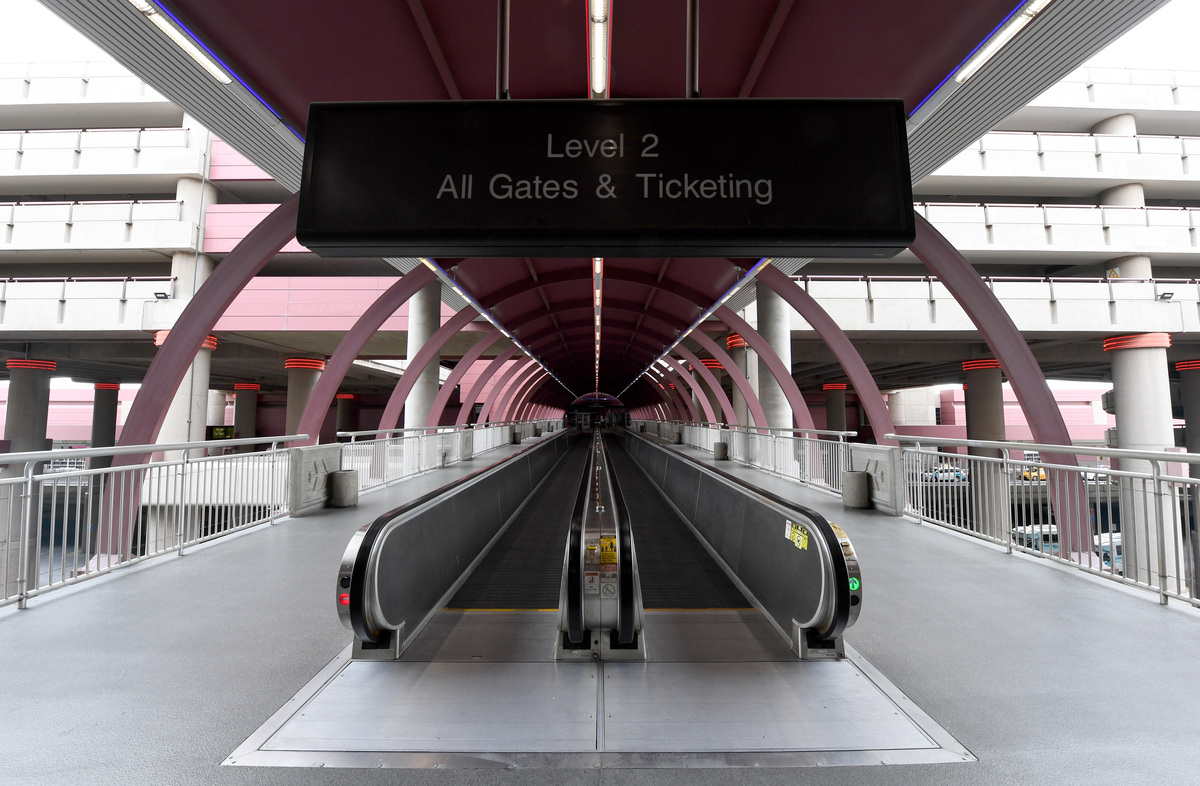 Airlines say they will likely have to lay off thousands of workers if Congress can't pass a coronavirus economic relief package soon. Amtrak, bus lines and subways are suffering, too. Above, an empty walkway at Las Vegas' McCarran International Airport on March 19, 2020.

This is a surreal time to be going to work inside of an airport.

"This is shocking, the speed in which this has completely changed our lives," says Sara Nelson, president of the Association of Flight Attendants, the union representing 50,000 flight attendants at 20 different airlines.

Nelson says many flight attendants are already taking pay cuts because they're working fewer flights and now they face the prospect of layoffs or lengthy furloughs.

"And then we're walking through empty airports and wondering, how long this can last?" she says.

The answer from the airlines is not long: a couple of months or maybe even just weeks before the industry is crippled and tens of thousands of workers may be laid off or furloughed. The industry is being crushed by a huge drop in travel. Airports and airplanes are nearly empty, with some flights carrying fewer than a dozen passengers and many others canceled because hardly anyone is flying. The TSA only screened about 331,000 people nationwide Monday, compared to more than 2.4 million on the same day last year, a drop of 86 percent.

"What has happened is devastating, it's just devastating," says Nick Calio, president and CEO the industry lobbying group Airlines for America. "This is a today problem, not a tomorrow problem," he adds.

Ships, Planes And Other Spots Are Getting A 'Deep Clean.' What's That Mean?

The airlines employ 750,000 people in the U.S., Calio says, and beyond that, he says "there are another 10 million jobs created because of those people working for our airlines."

"The airline industry drives our economy in terms of carrying passengers, business travelers and shipping packages," Calio says. "It's over five percent of the gross domestic product."

And then there are the people who work at airports, not directly for the airlines, but for contractors and vendors to the airlines and airports, many of whom are already laid off.

Luerica Fiffee, a passenger service agent at New York's JFK airport, says she was just laid off a few days ago. "I have seven kids to take care of and no one is hiring at the moment," she says. "How will I manage?"

Benjamin Chavez, a baggage handler in the international terminal at Chicago's O'Hare airport hasn't been laid off yet, but fears he could lose his $14 an hour job any day now.

"It's been super slow at the airport lately," he says. "There's been less flights, less people I see now. ... It's scary in so many ways. Scary financial and scary, like, whoa, where have all the people gone? You're used to seeing like a busy airport but now there's very few people around. It's a scary sight, really."

Many in Congress agree the airlines and workers need federal help, but the sticking point is, what form that assistance takes, and what strings are attached.

Unions don't want a repeat of previous bailouts. After Sept. 11, airlines got cash assistance but several airlines still filed for bankruptcy and were able to cut jobs, wages and pensions. After the great recession of 2007-2009, when passengers and profits returned, airlines pumped much of the extra cash into executive bonuses and buying back stock to boost shareholder value instead of building up their reserves for a rainy day.

"Any bailout for the airline industry has got to focus on the workers, not the executives," says Rep. Barbara Lee (D-CA).

Congressional leaders are still ironing out the details, but it appears the broad coronavirus economic recovery bill will include restrictions on stock buybacks and bonuses, which the airlines have now agreed to.

Airlines had initially wanted half of the $50 billion in aid to be in the form of direct cash grants. But the initial plan proposed by Senate Republicans would give airlines $50 billion, but all of it in loans that would have to be paid back.

A House Democratic counter proposal increases overall aid to more than $60 billion and includes direct cash grants to airlines and contractors, but those payments would have to subsidize workers, keeping them on the payroll, to prevent layoffs and furloughs.

It's not just the airlines and their workers seeking federal assistance, many other travel and transportation industries have their hands out. Airports and airport vendors are losing revenue; they could get $10 billion in federal aid under the House Democrats' plan. Cruiselines, hotels and resorts are shutting down or scaling back, while laying off workers. They stand to get federal support, too. Amtrak has lost tens of thousands of riders and may get $1 billion in the deal.

"Chicago, LA, New York, Philadelphia, you can name 'em; they're seeing a dramatic drop in ridership," says Stephen Schlickman, a transportation consultant and the former executive director of Chicago's Regional Transportation Authority. He says ridership is down 50 to 90 percent in some cities, with the Seattle and New York City transit systems especially hard hit because of the COVID-19 outbreaks in those cities, as many would-be riders stay home from work and some don't ride to avoid being too close to other people.

"Trying to stand six feet away from a person on a train or a bus is almost impossible," Schlickman says, referring to social distancing recommendations.

As ridership plummets, so too does fare revenue. And Schlickman says with bars, restaurants and shops closing down, there's a huge drop off in sales tax revenue, too. "Sales tax is probably the largest source of tax revenue that transit systems rely on across the country," he says.

Congress and the White House appear to have an agreement on providing transit agencies at least $20 billion in aid. Whether it'll be enough depends on how long riders continue to work from home.