Accessibility links
U.S. 'Disappointed' In Afghan Leadership, Will Slash $1 Billion In Aid, Pompeo Says The secretary of state's announcement follows meetings in Kabul with Afghanistan's rivals to the presidency, Ashraf Ghani and Abdullah Abdullah. Pompeo said another $1 billion could be cut next year. 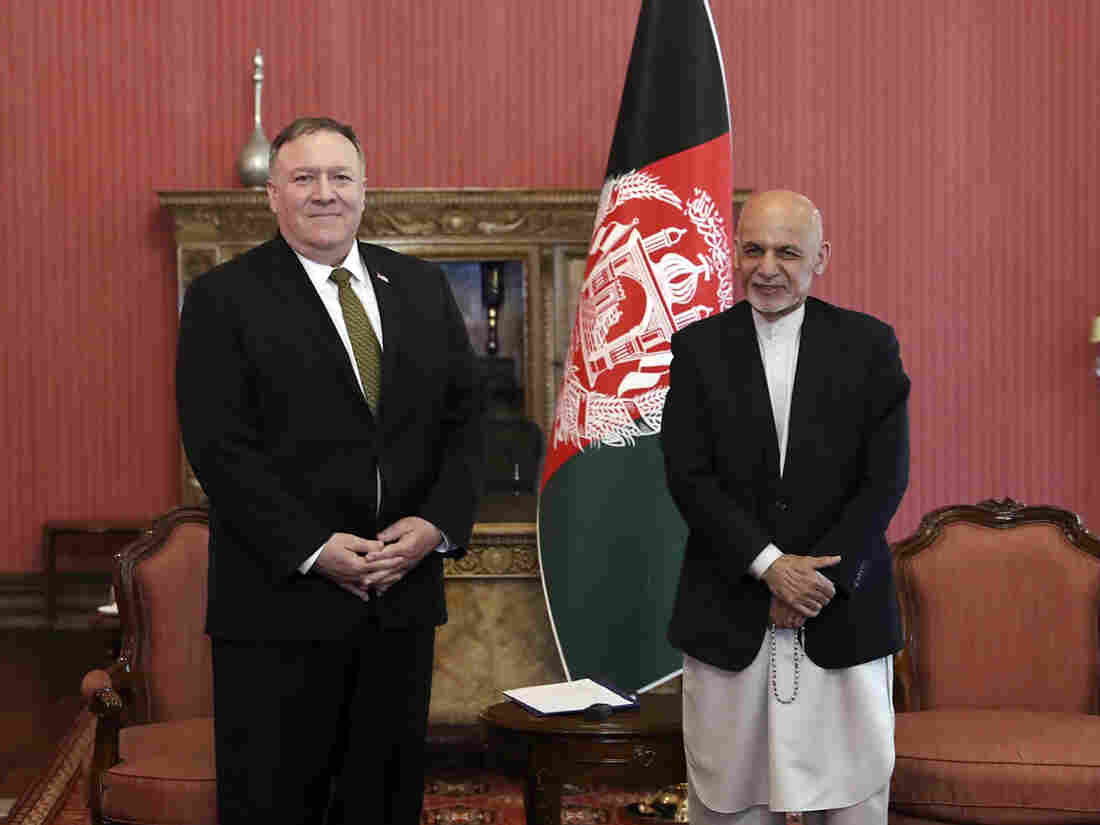 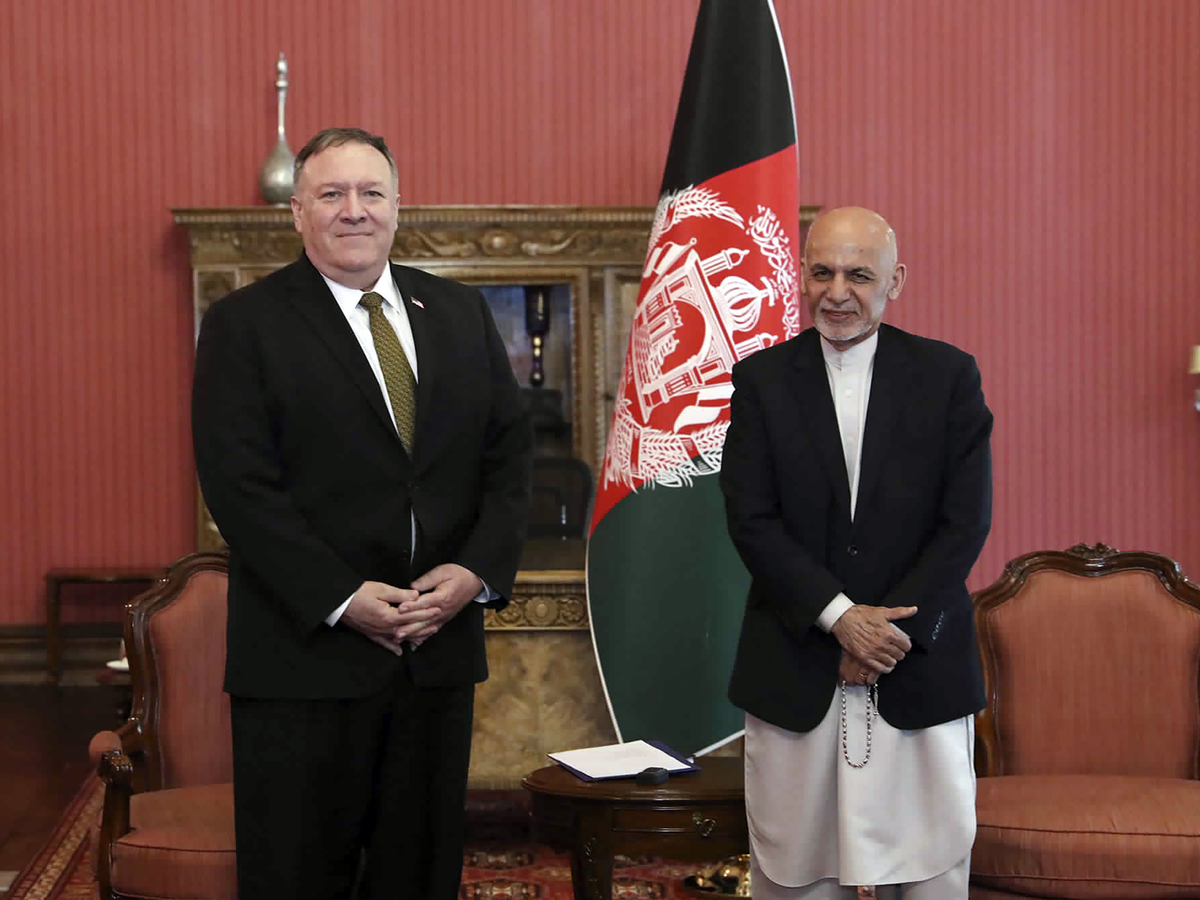 Secretary of State Mike Pompeo (left) stands with Afghan President Ashraf Ghani at the Presidential Palace in Kabul, Afghanistan, on Monday. Pompeo says the U.S. will cut $1 billion in aid to Afghanistan.

Secretary of State Mike Pompeo announced Monday a decision to slash $1 billion in U.S. aid to Afghanistan, saying that Washington is "disappointed" in the country's rival leaders, who have been unable to form a government following last year's disputed presidential elections.

The statement follows an unannounced trip by Pompeo to Kabul, where he held meetings with Afghanistan's rivals to the presidency, Ashraf Ghani and Abdullah Abdullah, that were aimed at breaking a deadlock that has persisted since September's election. Incumbent Ghani was declared the winner in February, but Abdullah disputed the results, claiming fraud.

In unusually frank language, Pompeo said the inability of Ghani and Abdullah to resolve their impasse had "harmed U.S.-Afghan relations and, sadly, dishonors those Afghan, Americans, and coalition partners who have sacrificed their lives and treasure in the struggle to build a new future for this country."

Pompeo's statement said the U.S. "deeply regrets" that Ghani and Abdullah have said "that they have been unable to agree on an inclusive government that can meet the challenges of governance, peace, and security, and provide for the health and welfare of Afghan citizens."

He didn't say when the aid would be cut, but said that if Washington wasn't satisfied with progress in Afghanistan, another $1 billion would be cut in 2021.

However, in a subsequent briefing with reporters on his plane during a return flight to the U.S., Pompeo declined to be specific about what part of U.S. aid would be cut and suggested that the announcement was largely meant as a threat.

"I don't want to talk about the details of what we're going to do," he said. "We're hopeful, frankly, they'll get their act together and we won't have to do it, but we are prepared to do that if they can't."

Less than a month ago, the U.S. signed a peace deal with the Taliban in Doha, Qatar. As part of the deal, Washington agreed to withdraw within 14 months all of its military forces and civilian support, as well as those of allies in the international coalition. That drawdown is already underway and should leave just 8,600 troops in Afghanistan by about midyear, with the rest to leave by spring 2021.

The Afghan government also is expected to release up to 5,000 Taliban prisoners in exchange for 1,000 Afghan security forces held by the Taliban.

Following his brief stop in Kabul during which he was sharply critical of Afghan officials, Pompeo stopped in Doha, where he met with Taliban negotiators. Pompeo was later asked if the Taliban were also "acting inconsistently with the agreement."

"No," he said. "They committed to reducing violence; they have largely done that, and then they are working towards delivering their team to the ultimate negotiations."

Pompeo said the U.S. and members of the coalition were proceeding with plans to draw down forces even as the Afghan government remained dysfunctional.

"We are moving down that timeline," Pompeo told reporters. "So the Resolute Support forces, including all 29 countries, are reducing their footprint."

"We made a commitment that we would do a force reduction that would be – I think it was 135 days, so June, July," he said. "As long as these violence levels remain beneath the threshold, our commitment is that we'll continue."

Pompeo's trip was meant to help settle an internal dispute in Afghanistan despite Washington's earlier insistence that it wouldn't get drawn into the country's internal political squabbles.

However, the inability of Afghanistan to form a coherent government threatens the deal that the U.S. is trying to craft to end the war. In the initial phase, now complete, the U.S. negotiated directly with the Taliban, without the participation of Kabul. But in a second phase of the agreement as envisioned by Washington, the Taliban and the Afghan government would conduct direct talks.

Laurel Miller, who heads the International Crisis Group's Asia program, tells NPR's Morning Edition that the dispute between the rival presidential claimants in Afghanistan "is now tangled up with the peace process."

"It is inhibiting their ability to put together a negotiating team to sit across the table with the Taliban," she said.

The threat to cut off U.S. aid to the war-torn country comes as Afghanistan faces down the global coronavirus pandemic with little in the way of the medical infrastructure required to meet it. The latest World Health Organization situation report, dated March 23, indicates that Afghanistan has 40 confirmed cases from the virus and one death.