Accessibility links
Balancing Justice, Public Safety: Virus Brings Changes To Courts, Jails, Arrests People in jail are being released early, arrests are down and some court cases are being postponed as members of the criminal justice system grapple with the coronavirus threat. 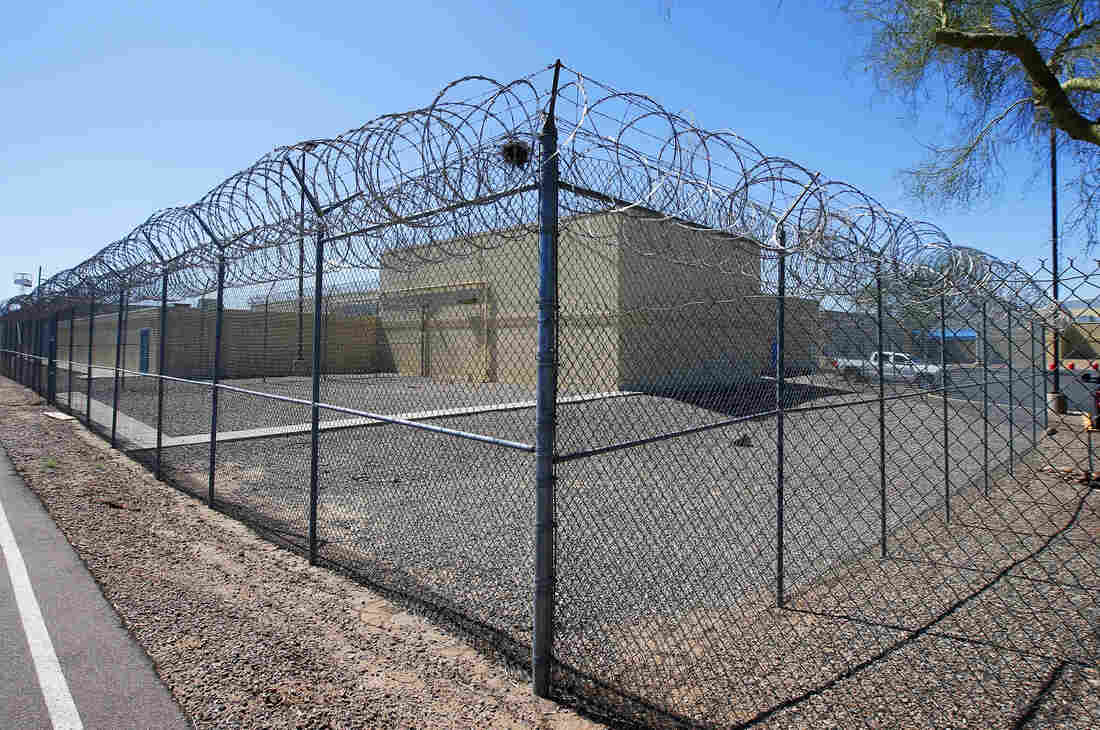 The grounds of the Maricopa County Estrella Jail in Phoenix, Ariz., on March 21, 2020. Some sheriffs want Arizona to follow the lead of other states and release low risk county jail inmates early — to prevent the spread of COVID-19. Ross D. Franklin/AP hide caption 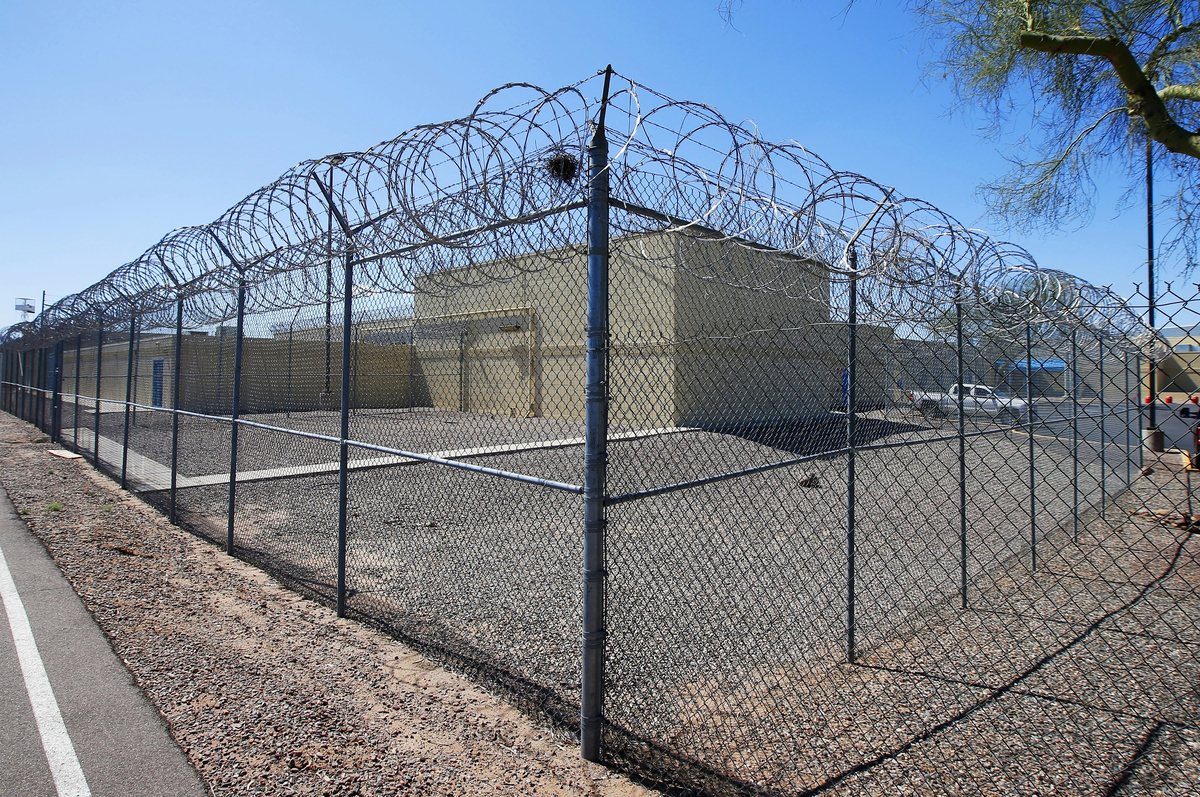 The grounds of the Maricopa County Estrella Jail in Phoenix, Ariz., on March 21, 2020. Some sheriffs want Arizona to follow the lead of other states and release low risk county jail inmates early — to prevent the spread of COVID-19.

What to do with a jury summons during a pandemic? That was the question Edward Lifson faced when he opened his mail and read that he was scheduled for jury duty in Los Angeles this week. Lifson believes it's an honor and a duty to serve on a jury, but, "to be honest, I would not do it right now," he says. "If they told me I had to come in I would say no."

No worries for Lifson and other potential jurors, though. On Monday, California's chief judge put all Superior Court civil and criminal trials on hold for at least two months. Mike Buenger with the National Center for State Courts says in many states, courts are operating under emergency operation plans. Trials already underway will continue, but there's no schedule for new ones. Buenger says there will still be some in-person court action. "For example, people still need temporary restraining orders or civil protection orders for domestic violence," he says. "We still have children who are in at-risk environments and so there may be need for child protective orders."

In Chicago, Cook County State's Attorney Kim Foxx says on any given day, there are typically hundreds of cases in one of the country's biggest court systems with dozens of jury trials. Foxx says Cook County's chief judge ordered an unprecedented slow-down which suspends most criminal and civil cases until the middle of next month. The primary focus in her office now, she says, is on cases where people already in custody may want to plea bargain.

"Our number one concern is recognizing that people who are at Cook County jail are at a heightened risk for the virus because of their close containment," Foxx says.

Once coronavirus gets into a jail, there's no way to stop it from spreading. You cannot do social distancing in a jail. You cannot.

So there's been a scramble in states to release non-violent detainees. Nina Ginsberg, president of the National Association of Criminal Defense Lawyers says it's a critical step that needs to occur. "This is ground zero," she says. "Once coronavirus gets into a jail, there's no way to stop it from spreading. You cannot do social distancing in a jail. You cannot."

This week, New Jersey took an unprecedented step. It started releasing all individuals in the state's county jails who've been convicted of low-level crimes or are serving time for probation violations. Others who are still awaiting trial will not be released. ACLU-NJ attorney Alexander Shalom says the ACLU, public defenders, prosecutors and the state Attorney General's office negotiated an agreement because there is an urgent need to reduce the jail population to help contain any spread of the coronavirus. He says it will mean freedom for about 1,000 individuals.

"It's not a get out of jail free card, in a sense. It doesn't commute people's sentences," says Shalom. "What it does, is it says: We are going to let you out now in this time of crisis." Shalom says once the crisis is over, it's either back to jail for a detainee who was released or a sentence could be commuted.

The department is not turning a blind eye to crime. No one will escape accountability for the crimes they commit.

Police departments across the country are doing their part by holding back arrests. Last week in Philadelphia, Police Commissioner Danielle Outlaw said the department will continue to make arrests for non-violent crime but once a person's identity is confirmed, they will be released. "The department is not turning a blind eye to crime," says Outlaw. "No one will escape accountability for the crimes they commit." Outlaw says police will also hand out warrants telling the individuals they are letting go that they must come in later.

In Los Angeles, Craig Lally, the head of the Los Angeles Police Protective League, says instead of arrests for non-violent misdemeanors like shoplifting, officers are writing "release from custody" citations. "It's almost like a ticket — like a speeding ticket," Lally explains. "When you sign for the ticket, you're not admitting guilt, you're just signing that you'll go to court." Lally says the arrest policy helps keep people potentially infected with coronavirus out of police stations and jails. Los Angeles Police continue to arrest anyone who commits a serious crime.

Duffie Stone, the head of the National District Attorneys Association says with all the changes taking place, officials in the criminal justice system should be careful so there's no trading of one risk for another. "I don't want to see us release a bunch of criminals out of jails, whether on plea deals or bail reductions, because we are trying to fight a pandemic," says Stone.

Whatever the perspectives, the COVID-19 pandemic is forcing the criminal justice system to find new ways to balance justice with public safety.