Accessibility links
Review: 'The City We Became,' By NK Jemisin Three-time Hugo Award winner N.K. Jemisin turns her attention to our world in her new book — or at least, a version of our world in which cities can be born in human form to fight evil.

New York Comes Alive — Literally — In 'The City We Became'

New York Comes Alive — Literally — In 'The City We Became' 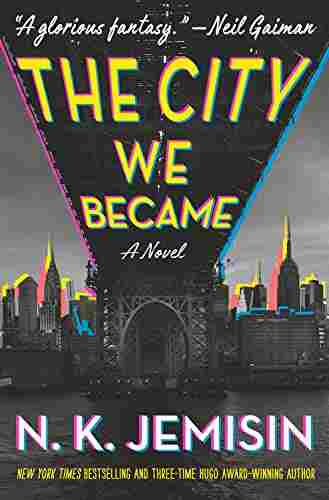 The City We Became hide caption

The City We Became

N.K. Jemisin is crushing it.

Her Broken Earth trilogy swept the Hugo Awards for three consecutive years. Her most recent story collection received near universal praise, and she's been called "the most celebrated science fiction and fantasy writer of her generation" (and rightly so).

So what does a writer like that do next? Something completely different.

Jemisin is known for her stories of fantastic powers and gods among us. Stories that also speak to modern themes of oppression, race and conflicts of cultures, supported by deep, layered worldbuilding that draws you into her beautiful but harsh landscapes. It may come as a surprise to some fans, then, that her latest book is set, not in a distant future world or another one entirely, but in New York City, right now. Or at least, a version of New York.

The City We Became is Jemisin's first book in her Great Cities series, a series that asks: What if a city had a soul? What if it could come alive, embodied in a human avatar? And though inconvenient for a commercial release, this book's theme and the story could not have landed at a more necessary time. The coronavirus is currently spreading across the country and the world. New York has been hit hard, and people in that lively, densely populated city are being asked to stay home, socially distance and take precautions to protect themselves and their neighbors from an invisible terror.

Jemisin's New York faces a more fantastical but no less insidious threat, something that wants to engulf the city in fear and darkness, stop its awakening and kill its avatars — unless the people of the city can join hands to stop it. She lays out the stakes in stark terms:

A city is never alone, not really — and this city seems less solitary than most. More like a family: many parts, frequently squabbling ... but in the end, against enemies, they come together to protect one another. They must, or die.

Exclusive 1st Read: 'The City We Became,' By N.K. Jemisin

That coming together is what forms the core of the story. New York has come alive, in the form of a scruffy street kid. But when he ends up in a magical coma, the city awakens five more people, avatars of the individual boroughs, to help. These very different individuals, each with special powers, are compelled to form an Avengers-like team to combat evil; a city-sized Voltron, if you will.

Now, let's talk about that city-eating evil for a moment. Without spoiling things, the monster in part takes the form of the eldritch, tentacled horrors created by famed author H.P. Lovecraft. But it is more than that; it's Lovecraft himself, and the xenophobia and racism that exists in much of his oft-celebrated work. To be blunt: Jemisin is no fan, she makes that clear, and she makes no apologies for it. In one scene, the physical manifestation of this evil says plainly,

Lovecraft was right ... Cities are an endemic problem of life amid these branches of existence: put enough human beings in one place, vary the strains enough, make the growth medium fertile enough, and your kind develops ... hybrid vigor.

My only real issue with the book is that it comes to a relatively abrupt end. I want to binge on the entire series right now.

The venom in her voice is palpable throughout the speech. And this is what the book does so well: It is, in a way, a metaphor for Jemisin's success, through her incredible body of work, at redefining the science fiction and fantasy genre — a genre that has long been defined by the tastes and stories of mostly white men. The monstrous forces that threaten the living New York City parallel the forces authors like Jemisin and her contemporaries have fought against for years. It seems no coincidence that she's set her story in a city that also happens to be the center of the publishing universe.

My only real issue with the book is that it comes to a relatively abrupt end. I want to binge on the entire series right now, which is the ultimate magic and allure of Jemisin's work. She pulls you into her world and makes you want more; she makes you want to stay there forever. Early blurbs have dubbed The City We Became a "love letter to New York" and it is, but that almost doesn't do what Jemisin accomplishes here justice. It is a love letter, a celebration and an expression of hope and belief that a city and its people can and will stand up to darkness, will stand up to fear, and will, when called to, stand up for each other.