Accessibility links
ESPN Embraces Historic Games, Slight Diversions In Coronavirus Era ESPN calls itself the "worldwide leader in sports," but there are few live sports to show. So it's scrambling to fill the time, offering diversions like cherry pit spitting and marble racing. 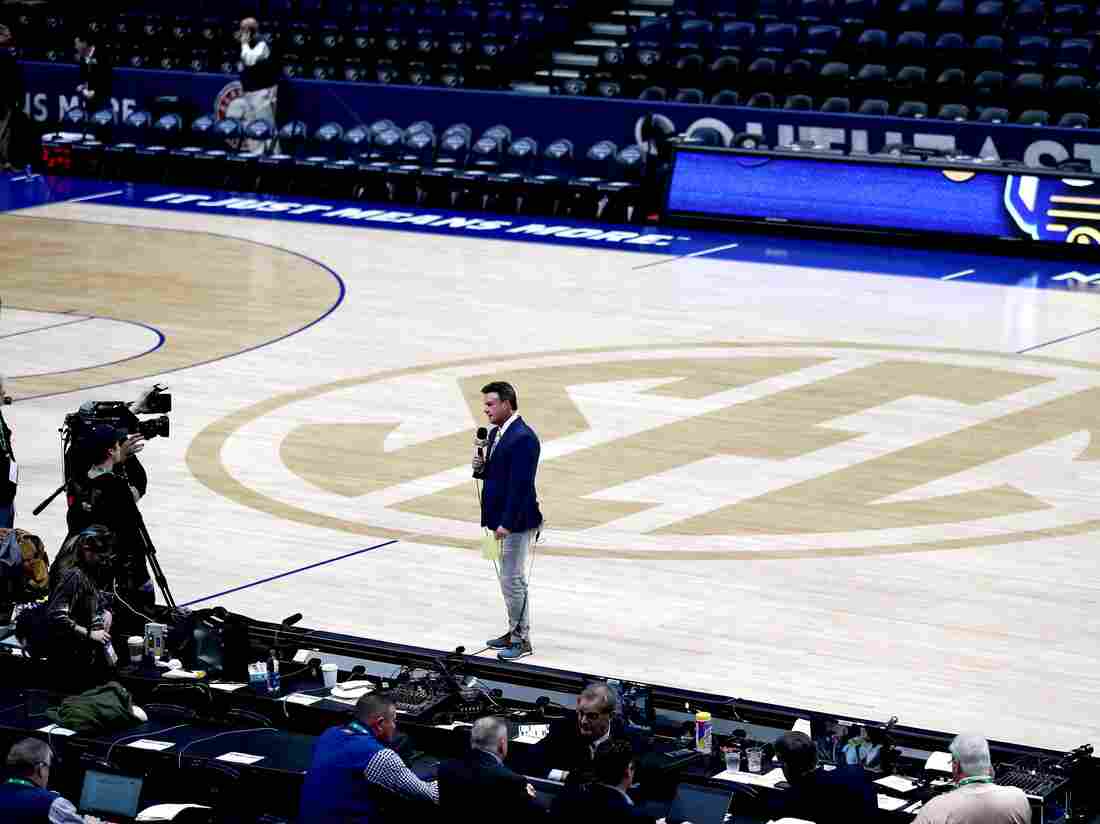 ESPN's Karl Ravech reports on the cancellation of the SEC Men's Basketball Tournament on March 12, in Nashville. With no live sports to show, the network is scrambling to fill the time. Its offerings now include diversions like cherry pit spitting and marble racing. Andy Lyons/Getty Images hide caption 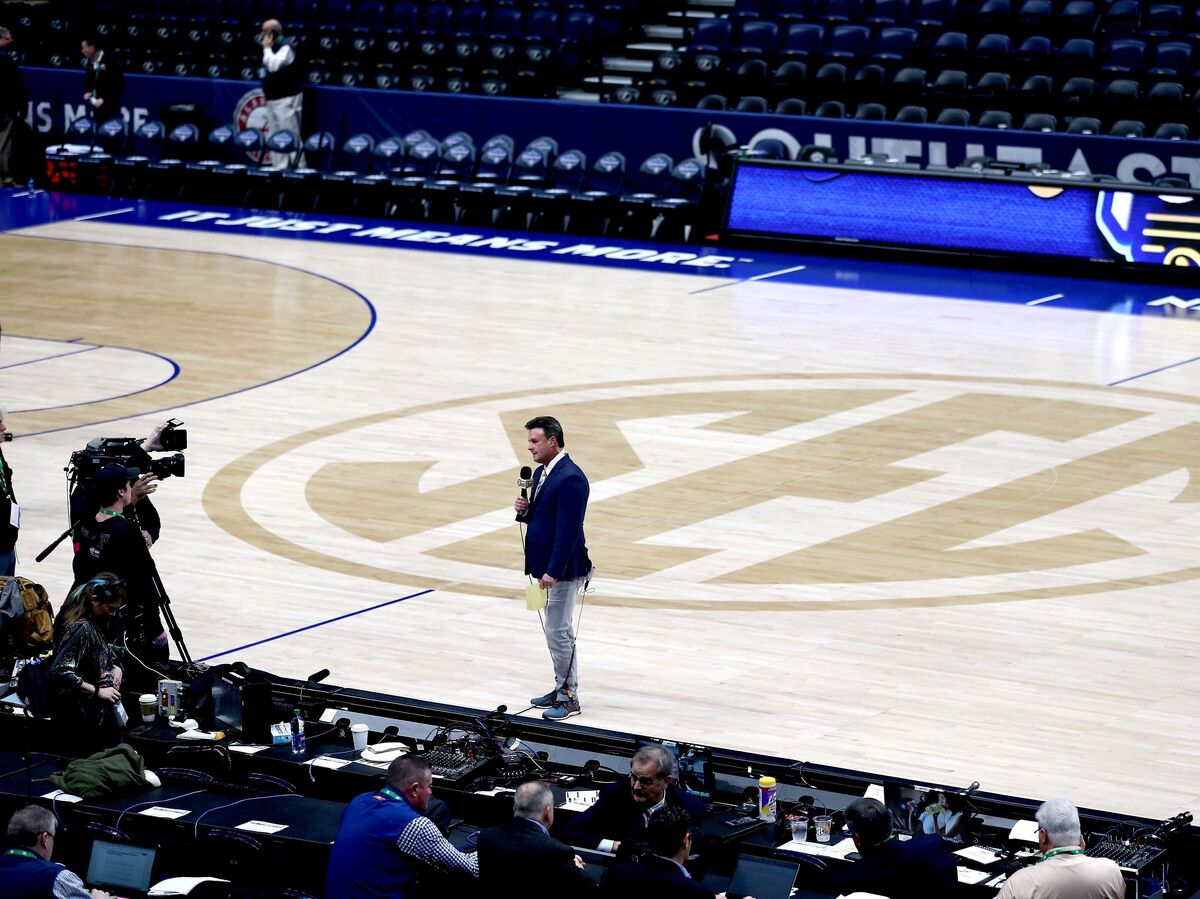 ESPN's Karl Ravech reports on the cancellation of the SEC Men's Basketball Tournament on March 12, in Nashville. With no live sports to show, the network is scrambling to fill the time. Its offerings now include diversions like cherry pit spitting and marble racing.

ESPN has gone from gearing up for March Madness to featuring marble racing.

As the coronavirus shuts down Broadway, bars, bowling alleys and more, consider the predicament of cable giant ESPN: The self-proclaimed "worldwide leader in sports" is now operating in a world where there are nearly no live sports.

"We have the rights obviously to [broadcast] the NBA, NFL rights, Major League Baseball rights. We have some digital NHL rights. We have soccer leagues from all over the world," says ESPN's Jeremy Schaap, host of shows Outside the Lines and E:60. "There's not much that ESPN doesn't show. ... It's a lot of stuff which, of course, now is not going to be taking place."

During the great lockdown of 2020, many millions of Americans would like nothing more than the diversion of watching their favorite professional and collegiate teams. Those teams and leagues are shut down too. The Tokyo Summer Olympics is to be postponed, probably for a year, which has upended plans at NBC Sports.

For ESPN — a network defined by broadcasting, covering and endlessly analyzing sports — the disappearance of most of the grist for its programming and coverage has sent ratings sinking. And it's sent network executives scrambling to fill the time.

ESPN declined to comment for this story or release ratings figures. An executive vice president, Burke Magnus, said on ESPN's website that the network wanted to cover the effects of COVID-19 on athletes and sport while giving viewers diversions, whether reporting on transactions or events from the archives and entertaining stunt programming.

"With our daily podcast, for example, we are doing some stories on the news. And by the news I mean how coronavirus is affecting sports," says Mina Kimes, host of the podcast ESPN Daily. "And I try to find ways to talk about it every day. But I also think they want to hear about other things right now.

"Normalcy is escapist," Kimes says. "That sounds crazy and contradictory, but I think it's true when it comes to sports. "

So ESPN has been rebroadcasting classic NFL playoffs and March Madness contests, along with highlights of spectacular boxing and soccer matchups.

The network has also taken inspiration from the satiric portrayal of it in Dodgeball, the cult comedy hit with Ben Stiller and Vince Vaughn. The movie portrayed "ESPN 8: The Ocho" as devoted to "bringing you the finest in seldom-seen sports from around the globe, since 1999."

Under the brand The Ocho, ESPN has been presenting viewers with past contests in cherry pit spitting, marble racing, Sasquatch calling and lifting heavy stones above your head. (Seriously. I'm not making those last two up.)

ESPN is working to strike deals with partners, some old, some unexpected. On Sundays, it will be airing old WrestleMania matches from WWE. And there's movement behind the scenes to see if ESPN can create a different "league of the day," featuring a classic game for each weeknight, involving the NFL, Major League Baseball, the NBA and big college sports. But that would involve striking a series of individual deals with separate leagues.

"It was a little bit surreal," says Kimes, who is also a frequent NFL analyst for the network. "We're continuing to talk about that on all my shows, even with the knowledge that no one really knows, you know, when the NFL or any other sport is coming back."

Schaap interviewed champion thoroughbred trainer Bob Baffert, as horse racing is one of the few major sports still taking place — though with no fans in the stands. And ESPN resurrected one of Schaap's classic stories for E:60, about an annual event in which scores of Britons cast aside good judgment to chase a wheel of cheese speeding down the side of a steep hill in Gloucestershire.

"It's a weird position for the network to be in," Schaap says. "No one knows how many people are going to die, how many more people are going to be suffering and seriously ill. And sports intersects with society at large and especially in a situation like this. So, of course, there are stories that we should be covering and stories that we will be telling. But at a certain point, the question is going to be: How much does it matter?

"Let's hope we're in a position a few weeks from now, a couple months from now, that people can can care about sports and that it's not entirely irrelevant."