Accessibility links
Movie Review: 'Crip Camp' Near Woodstock, at an early '70s summer camp for kids with disabilities, a revolution was born that became a civil rights movement, and led to the passage of the Americans with Disabilities Act. 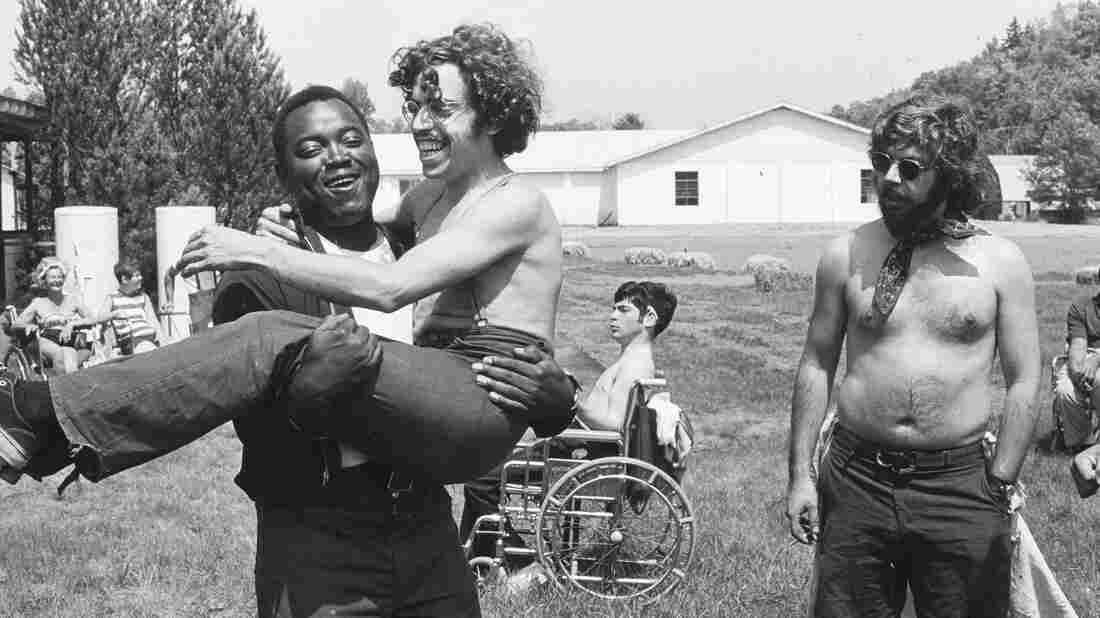 Camp Jened, in upstate New York, was the epicenter of a disability rights movement that led to the passage of the Americans with Disabilities Act. Steve Honigsbaum hide caption

Crip Camp opened the Sundance Film Festival two months ago, and it was supposed to arrive in theaters today. But with nearly all movie theaters closed, it's arriving instead on Netflix — and it's a window on a revolution.

The first person we meet is Berkeley Rep sound designer Jimmy LeBrecht, who's climbing above the theater's stage without the use of his legs. He was born with spina bifida. "They didn't think I was going to live more than a couple of hours," we hear him say. "Apparently I had different plans."

The wild thing is that this camp changed the world, and nobody knows this story.

The images on screen are home movies of an astonishingly active little boy zooming up and down stairs using just his arms, riding in a toy Thunderbird, later attending public schools. Outgoing, boisterous with friends — and in 1971, about to start his first year of high school.

"And then I hear from some people about this summer camp. It's a summer camp for, you know, the handicapped, run by hippies. And somebody said, you know, you'll probably smoke dope with the counselors. And I said, sign me up!"

Camp Jened, in the Catskills, turned out to exactly the way LeBrecht just described it: "The wild thing is that this camp changed the world, and nobody knows this story." 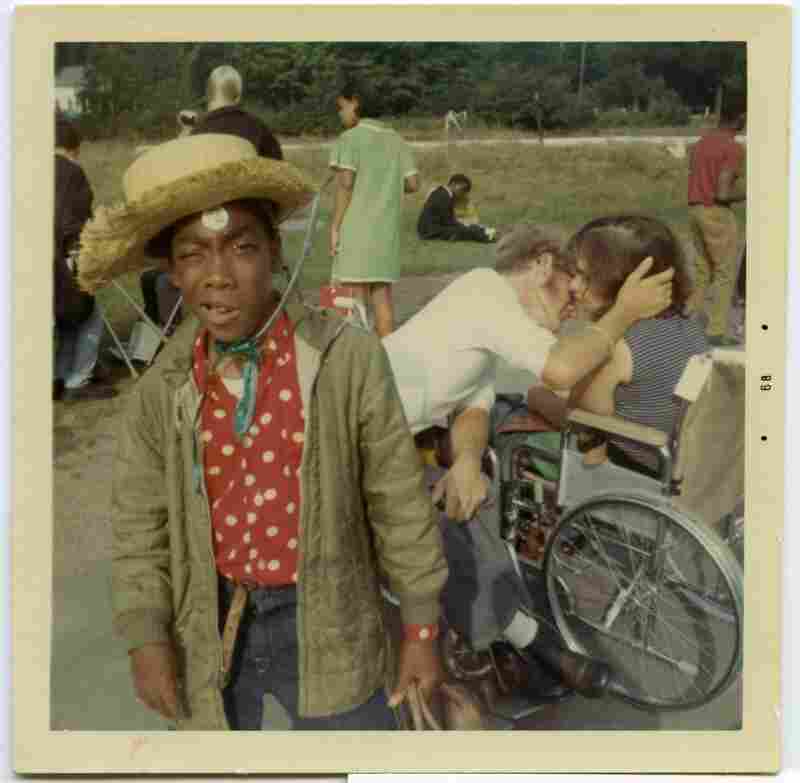 When Jimmy says "changed the world," he doesn't mean just for him, or even for him and the other campers, though at first their world is the one that gets rocked. These perpetually marginalized kids — differently abled because of deafness, polio, car crashes — are suddenly not on the margins, they're at the center of things, falling in love, having the time of their unusually-sheltered lives.

One boy with cerebral palsy remembers a female counselor teaching him to kiss. "Best physical therapy ever," he says. A collective called People's Video Theatre was capturing all this in black and white — kids enjoying the freedom to do things they couldn't usually do — put themselves out there, complain about their folks being overprotective, and most of all, run the show themselves.

In one scene, we see Judy Heumann organize the campers to cook a Wednesday night meal of lasagna. Heumann was a born organizer, who would give that side of herself wider range when camp was over for the summer. In the early 1970s, these kids were going back to a world where things were literally stacked against them, from staircases, to curbs without ramps. And when laws got passed, they often got vetoed for being too expensive.

At Camp Jened, the campers had seen what could be. Heumann started trying to make it be. And if wheelchairs couldn't get around New York City, well, Heumann was going to make sure no one else could. "We decided we were going to sit down in the street and we were going to stop traffic," she says in the film. "So at 4:30 in the afternoon, we formed this huge circle. We cut off four streets."

It was a revolution, and as told in Crip Camp by filmmakers Nicole Newnham and Jim LeBrecht (the sound guy whose story started us off) it's a raucous odyssey filled with twists, setbacks, smart strategizing, and unlikely strokes of luck. The second half of the film chronicles the tenacity that was needed to win battles in one administration, then re-win them in the next, for almost two decades until the passage of the Americans with Disabilities Act. And at every step, the Camp Jened folks are front and center. In photos, in archival news footage — unsung heroes in a civil rights story that largely isn't in history books, but that Crip Camp establishes — with an exhilarating flourish — sure ought to be.

This story was edited for radio by Nina Gregory and adapted for the Web by Petra Mayer.