Accessibility links
Defense Secretary Esper Says Military Has 'Limited Capacity' To Provide Hospital Beds New York alone could need nearly 90,000 more beds to deal with coronavirus patients, but in an interview with NPR, Mark Esper cautioned the Pentagon can only offer "a few thousand beds ... at most." 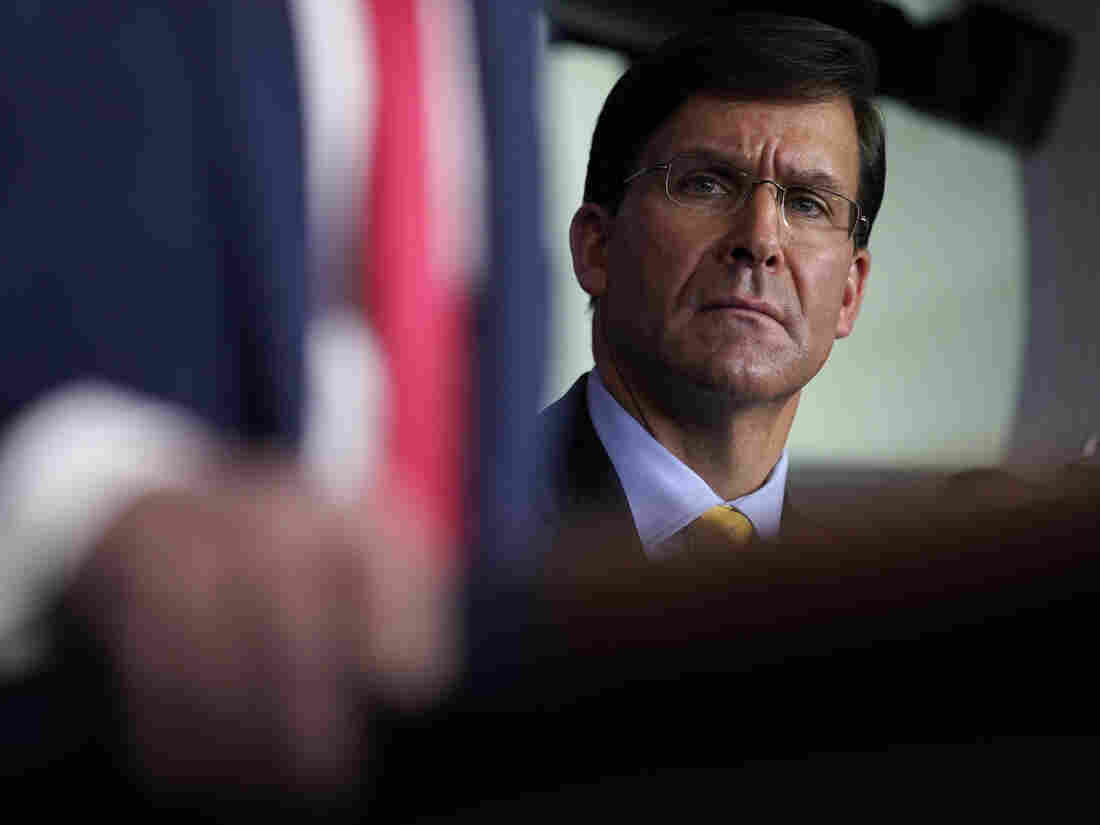 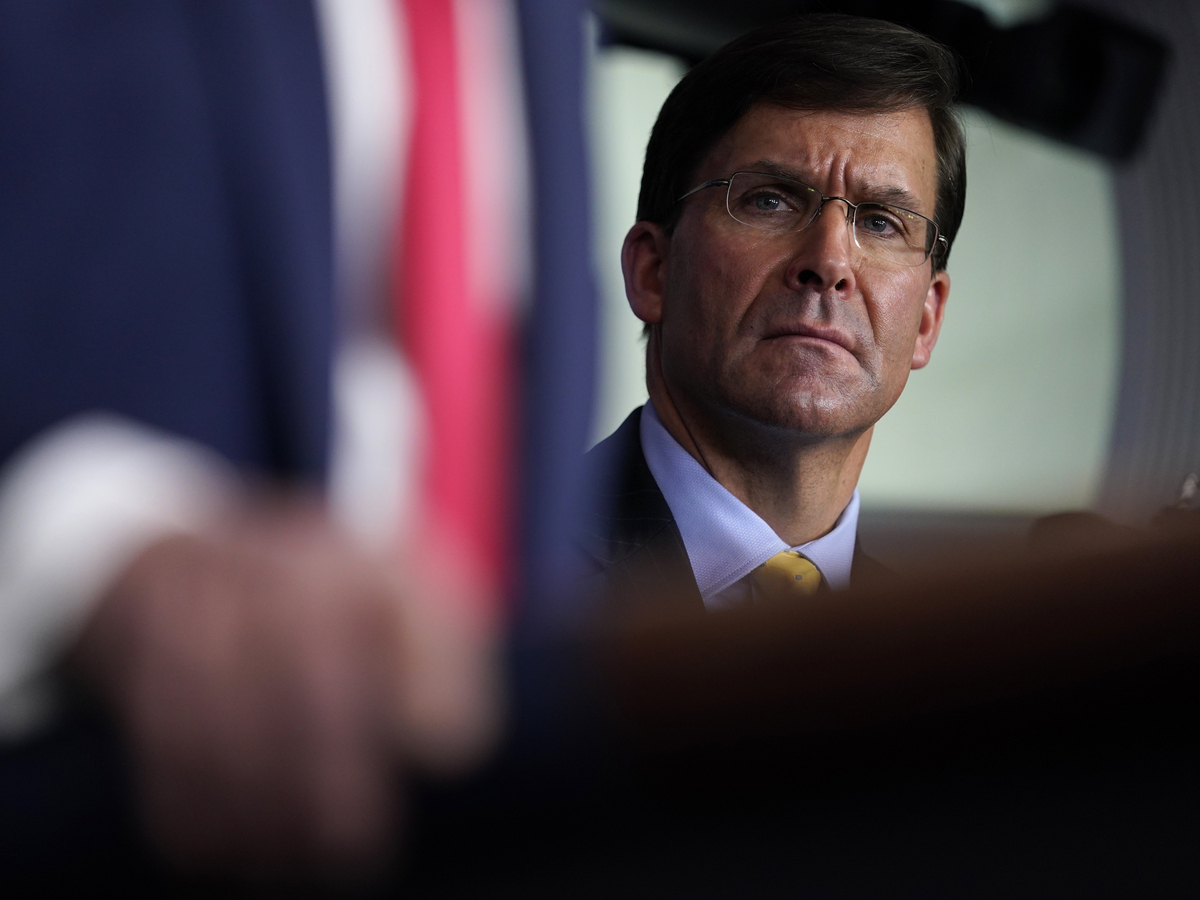 Despite urgent pleas from governors and mayors across the country, Defense Secretary Mark Esper cautioned on Wednesday that the U.S. military is not positioned to deploy nearly enough medical resources to address the scale of the coronavirus outbreak. And warning that the pandemic will "inevitably" alter the global strategic balance, he said the virus cannot be allowed to overtake national security as the Pentagon's top priority.

Esper's remarks come amid growing calls for military assistance from state and local officials for everything from extra beds to desperately needed ventilators. With the number of confirmed cases at 65,000 and rising, it's a crisis that President Trump now refers to as a "war" with an "invisible enemy."

But in an interview with NPR's Steve Inskeep, the defense secretary said that while the military may have "a lot of capability, [it is] not as much, I think, as many people think when it comes to medical capacity."

"What we have great capacity for is planning and logistics and things like that, when it comes to supporting civilian authorities," Esper said. "But in terms of hospitals, we have a limited capacity, maybe a few thousand beds ... at most."

That estimate would appear to fall far short of the nearly 90,000 hospital beds that could be needed in New York alone, according to projections from the state's governor, Andrew Cuomo. "The president says it's a war," Cuomo said on Tuesday. "Well, act like it's a war."

In terms of the military's role in the response, Esper has sought to temper expectations. Addressing reporters on Monday, Esper said he has spoken with "seven, eight, nine, 10 governors" and that each has requested military field hospitals. "We clearly can't meet everybody's needs with what we have in our inventory," Esper said.

In his interview with the NPR, Esper said the military wants "to put everything on the table we can to support the American people and help get beyond this." So far, however, there have been few simple solutions.

To help meet the demand for beds, the Army said this week it was preparing to deploy field hospitals to both New York and Washington state. Each hospital can accommodate an additional 248 beds, but as Esper noted, these hospitals are "geared toward treating trauma patients ... not in terms of supporting persons with infectious diseases."

The announcement followed plans by the Navy to send two hospital ships, the USNS Comfort and the USNS Mercy, to New York and Los Angeles respectively. Each ship can accommodate an extra 1,000 beds, according to the Navy. Neither ship will treat COVID-19 patients, according to a U.S. defense official who was not authorized to speak publicly on the matter. Instead, they'll help each city handle seriously ill patients other than those with the disease.

Supporting the military's mission are nearly 10,000 members of the National Guard deployed to all 50 states, four U.S. territories and the District of Columbia, according to Esper. The military has doctors and nurses it can also deploy, he said, but many of them are reservists who may already be responding to the crisis in their local communities.

Responding to the crisis has meant balancing the needs of cities and states with what Esper described as his top two priorities: protecting service members and safeguarding the military's mission capabilities. Esper said if he can do that, he can fulfill what he called priority number three: "provide full support to the whole of government."

"We have to take care of our service members. That's our most important resource, our most valuable asset, are our people," said Esper. "And so I got to take care of them first. But doing that also enables them, freezes them up to conduct that third mission and that is supporting the American people here at home as we deal with the with the coronavirus."

Esper said the military has recorded 227 cases of the coronavirus within its ranks so far. To help control that number, the secretary signed an order on Wednesday freezing the movements of all U.S. troops abroad for 60 days.

Esper said protecting service members and keeping the Pentagon's focus on national security is particularly important at this moment, given that the pandemic is all but certain to alter the global security landscape.

"I think things will change as a result of this pandemic," Esper said. "Countries will behave and act and prepare differently. You could see changes in societies, economies, in the governance of a country, and that's inevitably going to happen. So it's important for all of us to understand what that may look like and and how it may change the strategic environment."

His remarks echoed comments by Gen. Mark Milley, the chairman of the Joint Chiefs of Staff, who on Tuesday similarly warned about what coronavirus could mean for international security.

"This is affecting different countries differently, and it depends on the level of rigor and the robustness of medical facilities, capacity inside each country," said Milley. "It could, in some cases, lead to social breakdowns. It could lead to political chaos in certain countries. We have to be attuned to that."