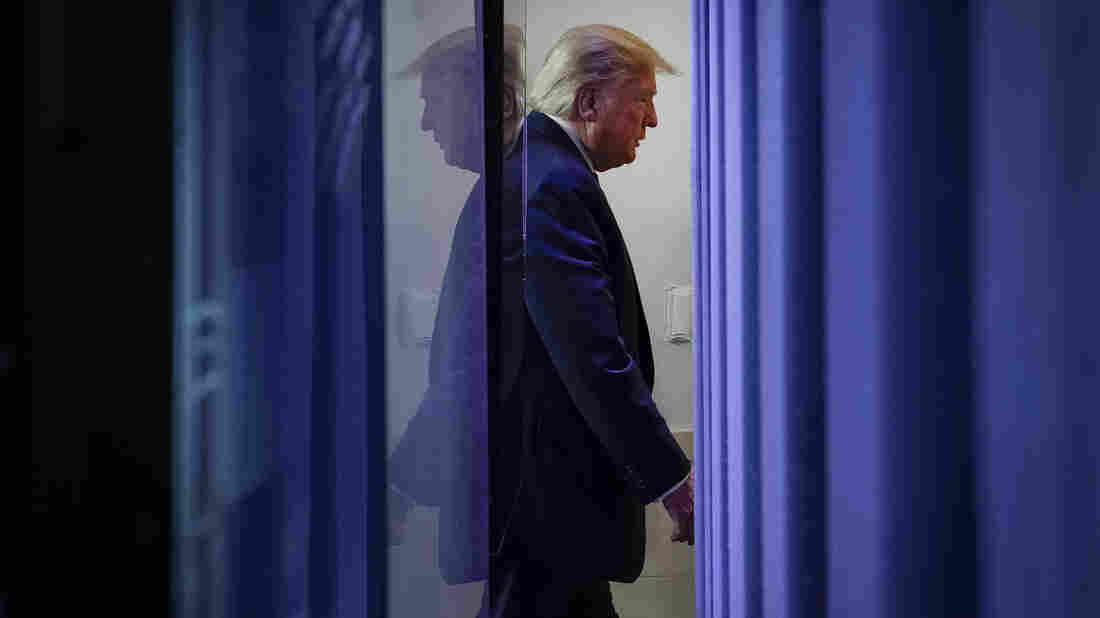 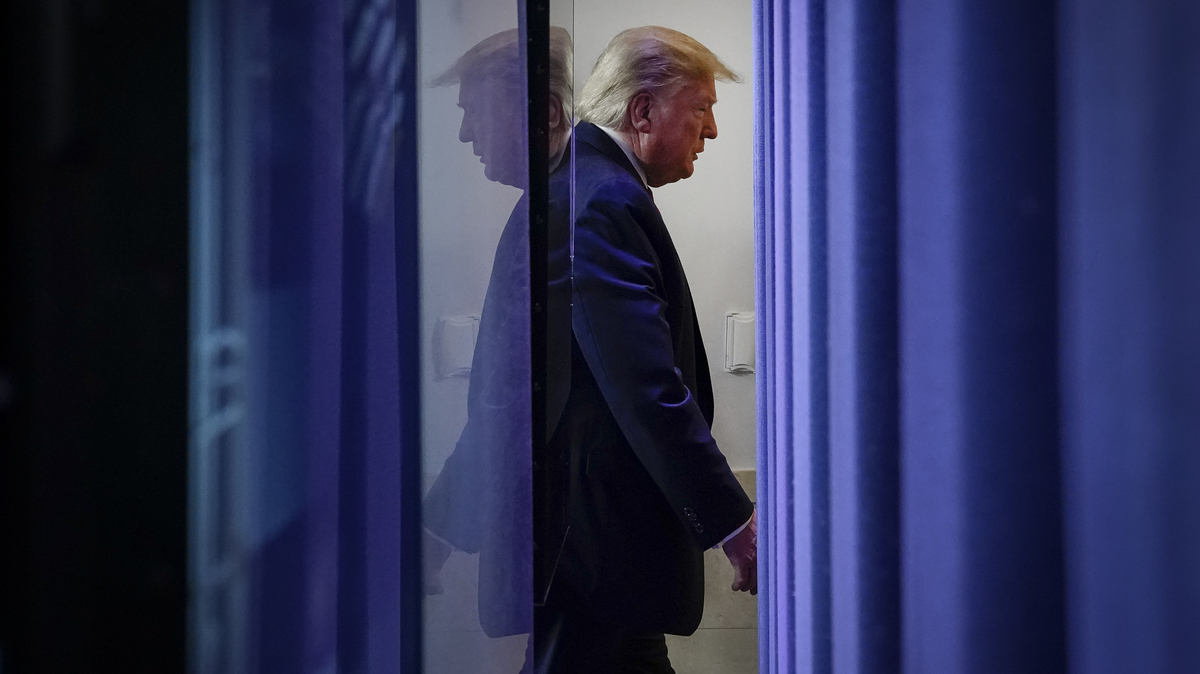 President Trump exits a briefing on the coronavirus pandemic at the White House Thursday.

President Trump told governors his administration is working on publishing guidelines for state and local governments to use to determine whether to increase or relax social distancing rules to contain the spread of the coronavirus.

The announcement came ahead of the White House's regular news conference on its response to the pandemic.

Trump is under pressure to restart parts of the moribund economy, stalled by skyrocketing unemployment as workers are urged to stay home and companies shut their doors.

Nearly 3.3 million people officially have filed for unemployment and the total number could be even greater. The president said on Thursday he hoped the hardships associated with the shock to the economy would be temporary.

"It's nobody's fault, certainly not in this country," he said. "I think you'll see a very fast turnaround once we have a victory over the hidden enemy, as I say."

The president has pushed his vision for a period of transition in which pandemic mitigation takes place at the same time as an economic re-opening.

To that end, Trump told governors in his letter that the administration will use data from expanded testing for the virus to categorized counties as high, medium or low risk. That data will drive the "next phase" of the response to the pandemic, he said.

Trump has said he would like people in parts of the country that have not experienced massive outbreaks to be able to go back to work, perhaps around April 12. He did not provide details on dates in his letter.

What Trump did say at the White House briefing was that he imagined a period of transition in which parts of the United States could start to get back to normal while still observing some mitigation measures.

"As soon as we open, that doesn't mean you're going to stop with the guidelines."

Some of them, he suggested, could result in a net positive for public health.

The tally surpassed about 82,000 on Thursday evening, according to data compiled by Johns Hopkins University. China's number of cases was just under that number.

About 1,200 Americans have died in the pandemic so far, according to the data compilation.

Dr. Deborah Birx of the White House coronavirus task force said 19 out of 50 states have fewer than 200 cases – she called this "extraordinarily low numbers" for those states.

She said 55% of all cases and 55% of all new cases are in the New York metro areas. She said she is concerned about growing numbers in Wayne County in Michigan and Cook County near Chicago, which suggest those places could become future hot spots.

But he warned that testing was still ramping up.

"To be honest, we don't have all that data now uniformly throughout the country to make those determinations," Fauci said. "But that's a major, primary goal that we have right now, is to get those data, because you have to make informed decisions and your decisions are informed by the information you have."

Trump's letter followed a day after the Senate overwhelmingly approved a $2 trillion economic relief package. The House is expected to vote on the bill by the end of the week.

Once the legislation has been passed and Trump has signed it, as he has promised, the Treasury Department is expected to begin cutting checks directly to many American families and also releasing hundreds of billions of dollars for hospitals and health care providers as well as business afflicted by the social distancing shock.

The naval hospital ship USNS Comfort is scheduled to sail from Norfolk, Va. on Saturday for New York City, Trump said. The president suggested he might travel to Norfolk to see the ship off.

The Comfort is expected to dock at Pier 90 in New York City on Monday, Trump said, and offer more treatment capacity to public health officials there.

The Comfort either could take some coronavirus patients in the place worst afflicted by the virus or take patients suffering from other problems to free up city or regional hospitals to focus on the pandemic. Trump said that wasn't yet clear: "We'll see how they do it."

The Comfort's sibling, the hospital ship USNS Mercy, has been deployed to Los Angeles to offer its capacity there.