Accessibility links
Meet Mark Meadows, The Incoming White House Chief Of Staff Congressman Mark Meadows of North Carolina has long had President Trump's ear. Now he's transitioning to what was a notoriously difficult job, even without a national crisis. 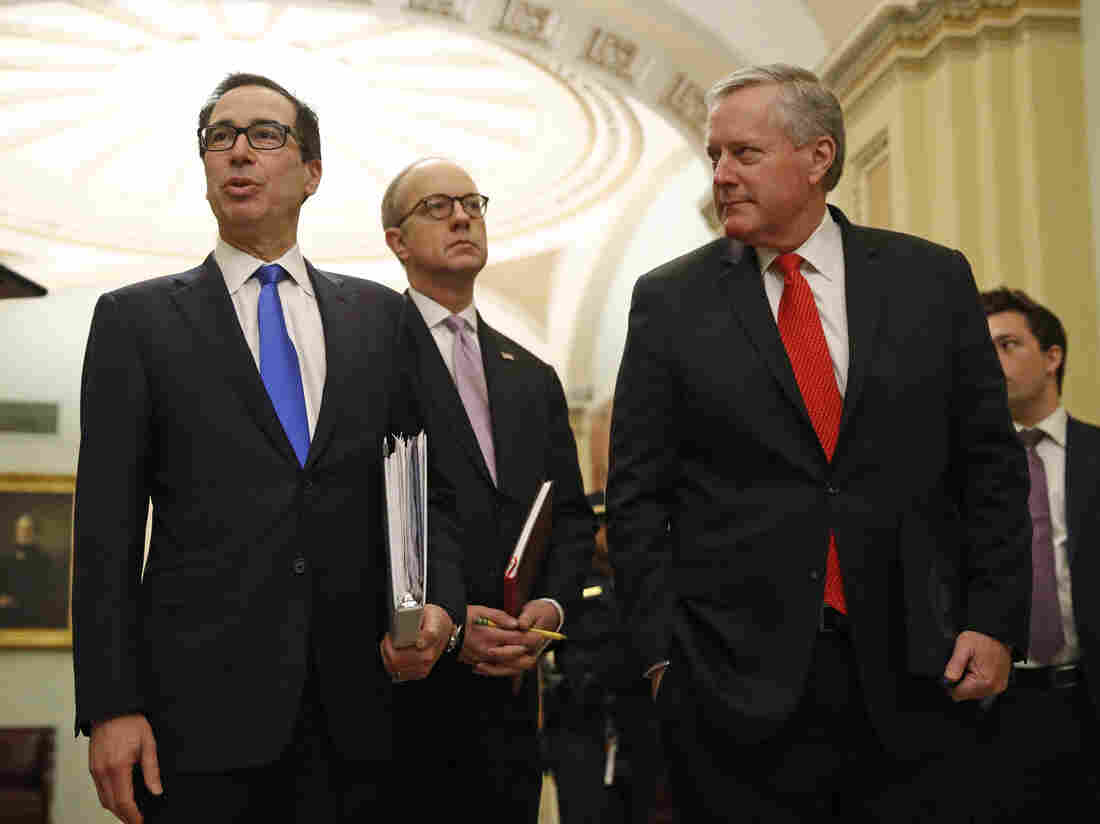 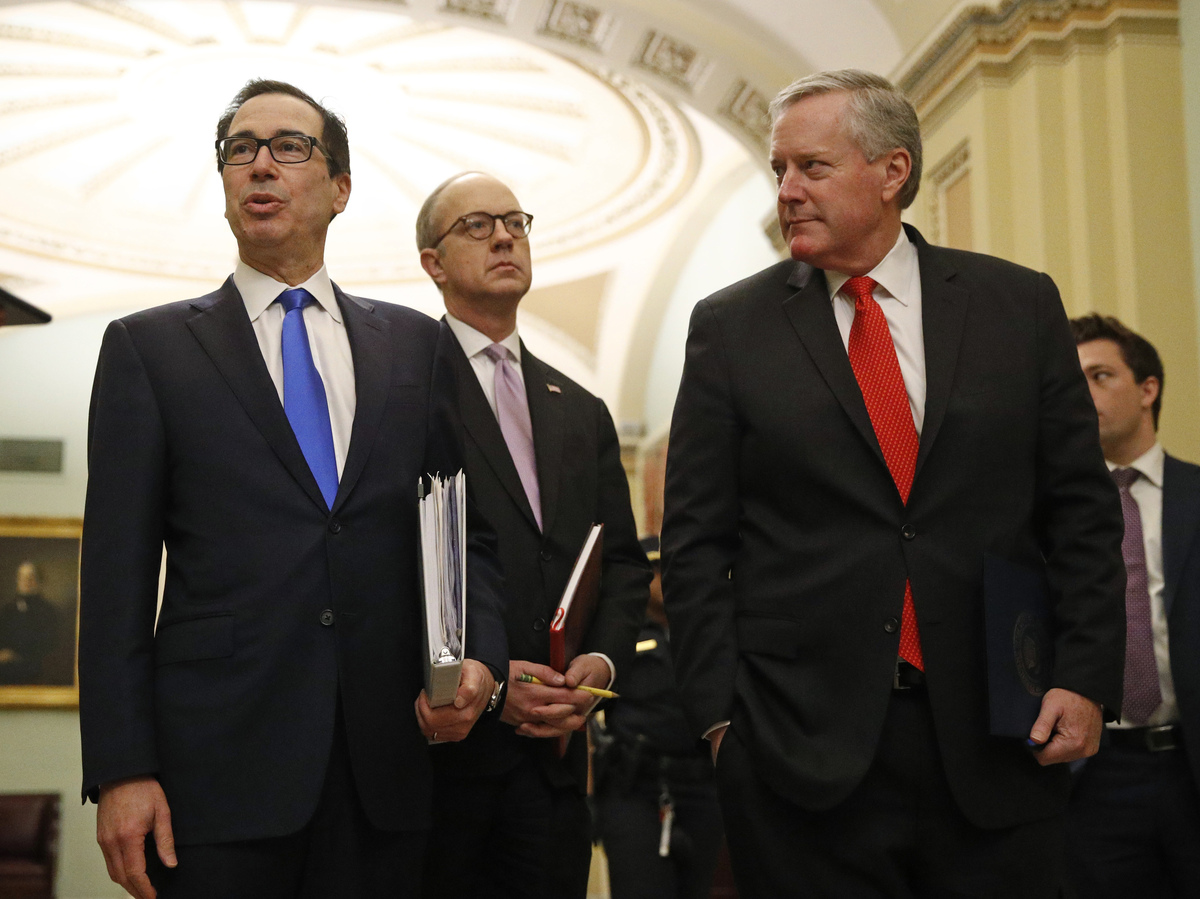 The coronavirus crisis was gaining steam when President Trump announced via tweet on a Friday night that he was replacing his acting chief of staff, Mick Mulvaney, with North Carolina congressman and frequent confidante Mark Meadows.

Nearly three weeks later, Meadows is still transitioning into his new job and hasn't yet resigned from Congress.

He may have been inside the room at the U.S. Capitol on Tuesday for White House negotiations with senators on the $2 trillion coronavirus rescue package — but he still had one foot back in his old job.

"I'm still a member of Congress," Meadows told a reporter as he left the room. "Mick Mulvaney is still the acting chief, officially."

It's a precarious time for the White House to be between chiefs of staff, given that Trump is grappling with a public health crisis that threatens millions of Americans, testing his presidency just ahead of the November presidential election.

And complicating matters, both Meadows and Mulvaney have briefly each been in self quarantine due to possible exposure to the virus.

Confirming: Mark Meadows was advised this weekend that now 12 days prior at CPAC, he may have come in contact with the COVID-19 positive test individual. A precautionary test came back negative & he feels great. He’ll be self-quarantined till the 14 day period passes Wednesday. pic.twitter.com/lNuOlFYmzv

Meadows hasn't voted on any bills since Trump named him chief of staff, including a previous multibillion-dollar coronavirus package. An aide says Meadows plans to resign from Congress around the end of March.

The constitution prohibits someone from serving in Congress and the executive branch at the same time. But Meadows has been at the White House, in and out of meetings. And Mulvaney is there, too.

Over the course of this lengthy transition, the number of coronavirus cases in the U.S. has ballooned from a few hundred to more than 60,000. And Trump has gone from endorsing a "15 Days To Slow The Spread" campaign to questioning whether his administration's response to the coronavirus epidemic is causing too much economic damage. In a traditional White House, these sorts of decisions would be guided by a chief of staff, but there's little indication that is happening now.

Trump has burned through chiefs of staff at a record pace in his three years in office. The first, Reince Priebus, who was never able to tame the competing power centers Trump set up, was fired in the summer of 2017. He was replaced by John Kelly, who attempted to bring a general's discipline to the chaotic Trump White House. But Kelly made political missteps and his efforts at control wore on Trump, who over time found ways to undermine Kelly's authority. Mulvaney, who replaced Kelly on an interim basis, lasted more than a year but never got the "acting" removed from his title. He took more of a "let Trump be Trump" approach, but eventually Trump soured on him too. 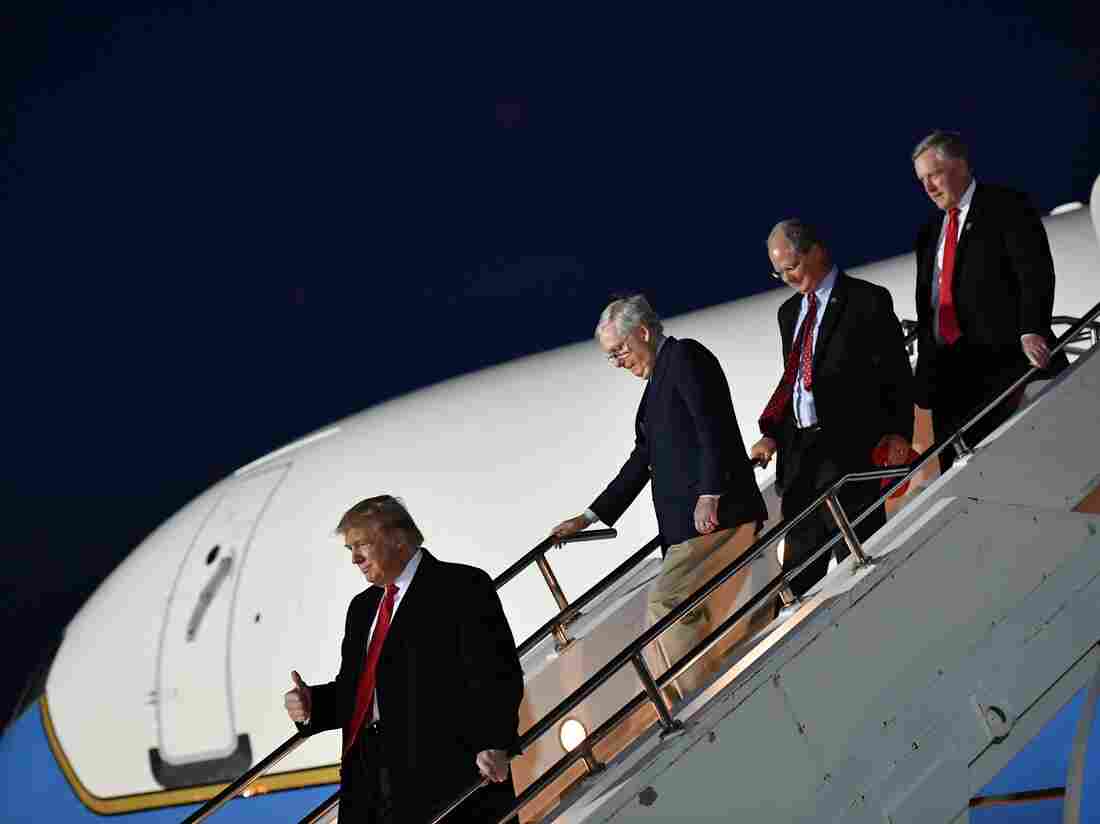 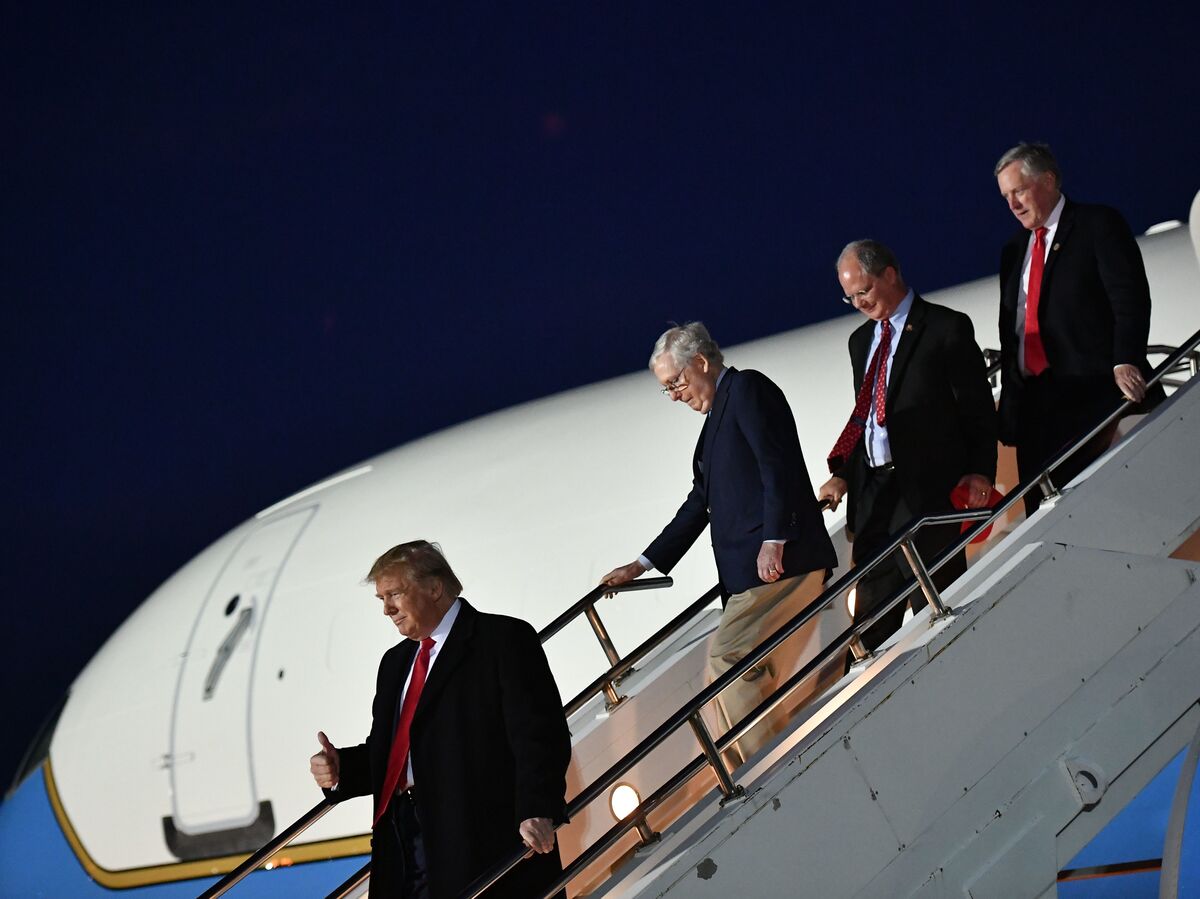 Difficult job at a difficult time

It's not clear yet how Meadows intends to run the White House, a notoriously difficult job even without a global pandemic. People who know Meadows say he may be better positioned to succeed than Trump's first three chiefs of staff.

"Mark has a really good grasp of who the president is, how the president operates," said Jay Sekulow, one of Trump's personal attorneys, who worked with Meadows on the president's impeachment defense. Long before being named chief of staff, Meadows was advising Trump. They talked on the phone all the time. And Sekulow says Trump trusts him.

"I feel that he will avoid any of the problem areas and that he will not interfere with the president's operating style, which is important," Sekulow said.

Trump and Meadows are close now, but they got off to something of a rocky start. Meadows didn't endorse him in 2016, though his wife Debbie campaigned for Trump — something Trump brings up regularly as he riffs about Meadows in speeches.

"His wife I actually like better than him, to be honest," Trump said at a victory rally of sorts in the East Room of the White House after his impeachment acquittal. "He doesn't know that I know that he didn't actually support me right from the beginning, but she did. And on my worst day — right? — on my worst day, my worst — I won't tell you why it was my worst, but it was not one of those good days — she got on a bus, got many other buses and women all over North Carolina, and they toured North Carolina."

Debbie Meadows was part of a group of women who campaigned for Trump in 2016 right after lewd comments he made on a hot mic ahead of an Access Hollywood interview became public — footage that nearly destroyed Trump's candidacy. 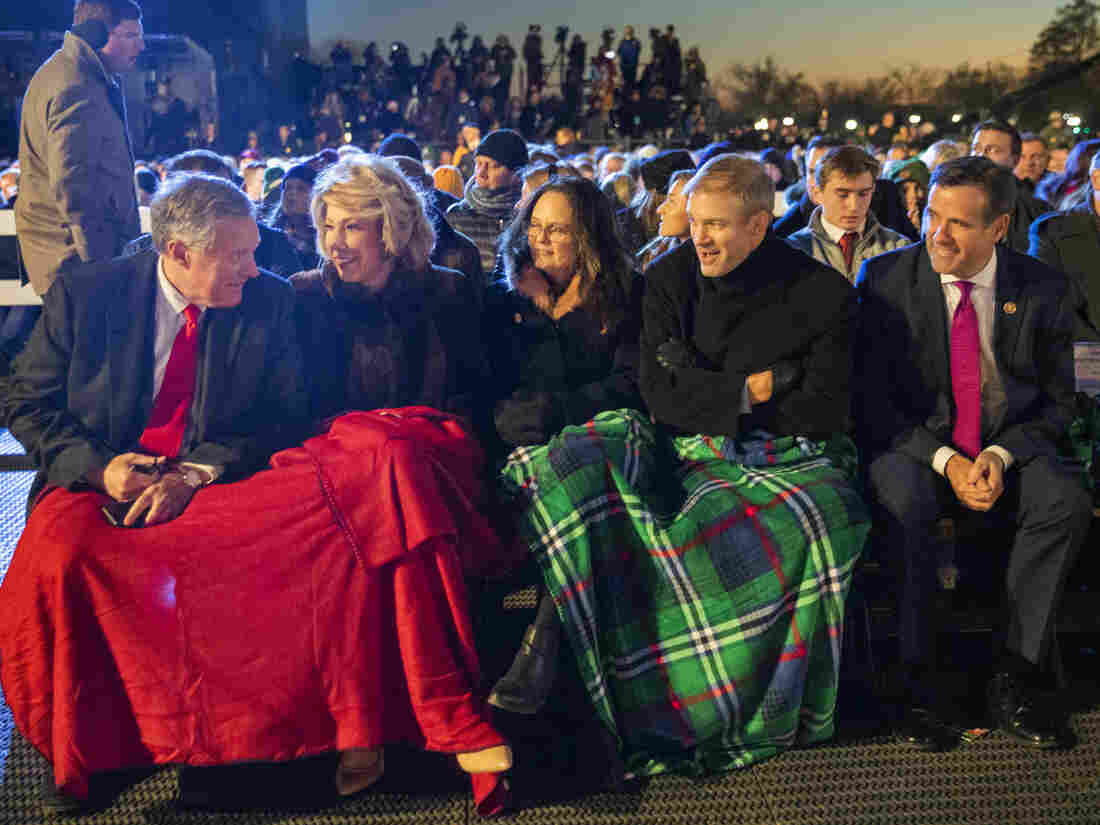 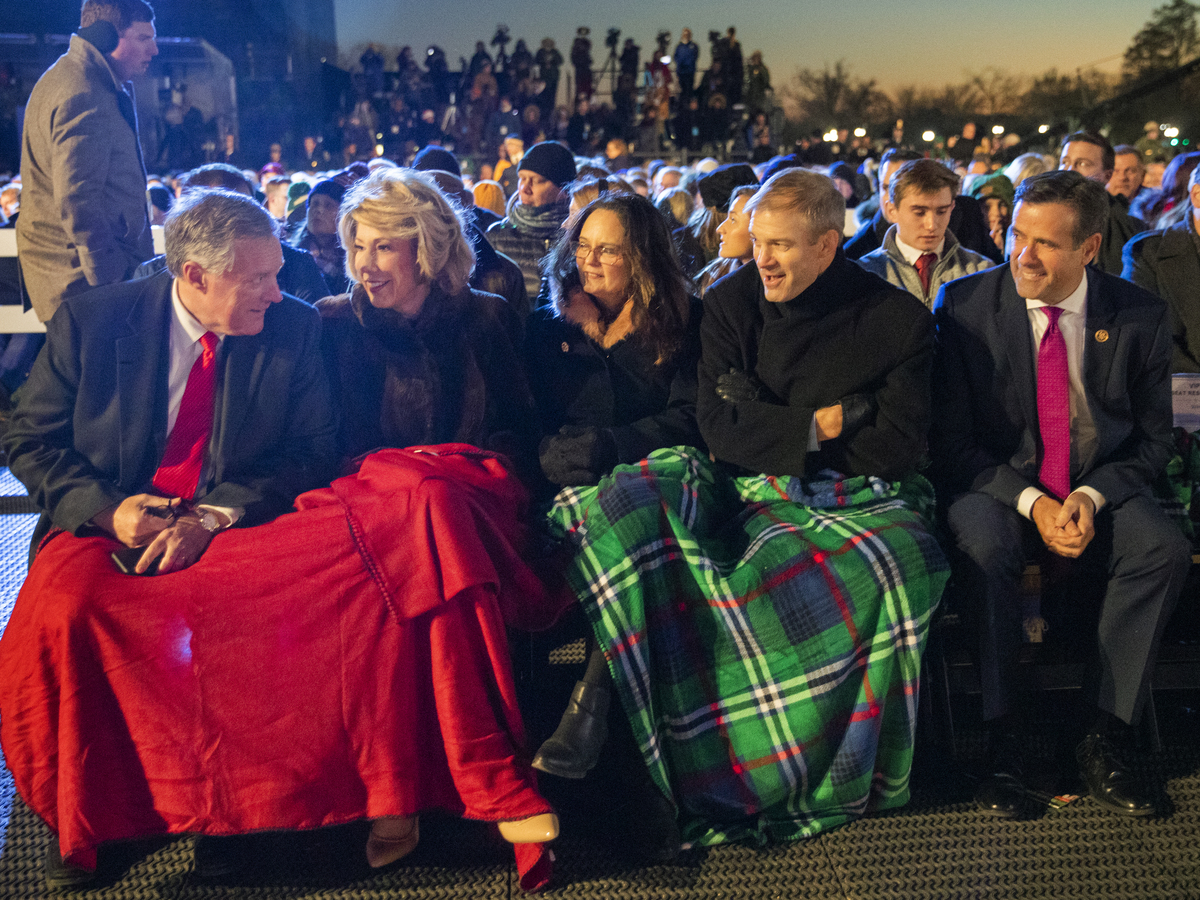 Rep. Mark Meadows and his wife Debbie Meadows waiting for the arrival of President Trump at the National Christmas Tree lighting ceremony in December.

Just a couple of months into Trump's presidency, Meadows — and the House Freedom Caucus he led — handed Trump an early defeat on his first try at repealing and replacing the Affordable Care Act.

"I am still a 'no' at this time," Meadows told reporters in March 2017. "I am desperately trying to get to yes. And I think the president knows that. I told him that personally."

Without Meadows and his fellow hard-liners, the bill had to be pulled without a vote, to avoid an embarrassing defeat. The House eventually passed a bill that Meadows helped negotiate, but it failed in the Senate.

For Meadows, clashing with his party's leaders was familiar territory by that point. In 2015, he used an obscure House procedure, known as a "motion to vacate the chair," to send a signal to then-House Speaker John Boehner that he wanted him gone.

Georgia Congressman Jody Hice, who considers Meadows a friend, says a lot of people urged him not to do it, including members of the Freedom Caucus.

"But Mark knew that was in the rules and he said it's in the rules for times like this," said Hice. "Of course, the rest is history. That really put him on the map in terms of people understanding that he knew the rules, knew how to play and he had the courage to step up when things needed to be done."

Meadows' motion didn't go anywhere. That kind of move could have ended his political career. Instead, it was Boehner who announced his retirement two months later. House GOP whip Steve Scalise, who was part of Boehner's leadership team at the time, now has nothing but praise for Meadows.

"You know, Mark's been in these positions where he'll call the president with a recommendation or an idea, and the president sometimes might take it and sometimes might not, but then they're able to move forward after that," Scalise said, adding that he thinks Trump wants advisers who can be honest with him.

Meadows is also known for having strong relationships with Democrats. He was close with the late Maryland Democrat and Oversight Committee Chairman Elijah Cummings, tearing up as he spoke at the congressman's funeral. While Cummings was alive, Meadows came to his defense when Trump went after him on Twitter and trashed the city of Baltimore as a "disgusting, rat and rodent infested mess." 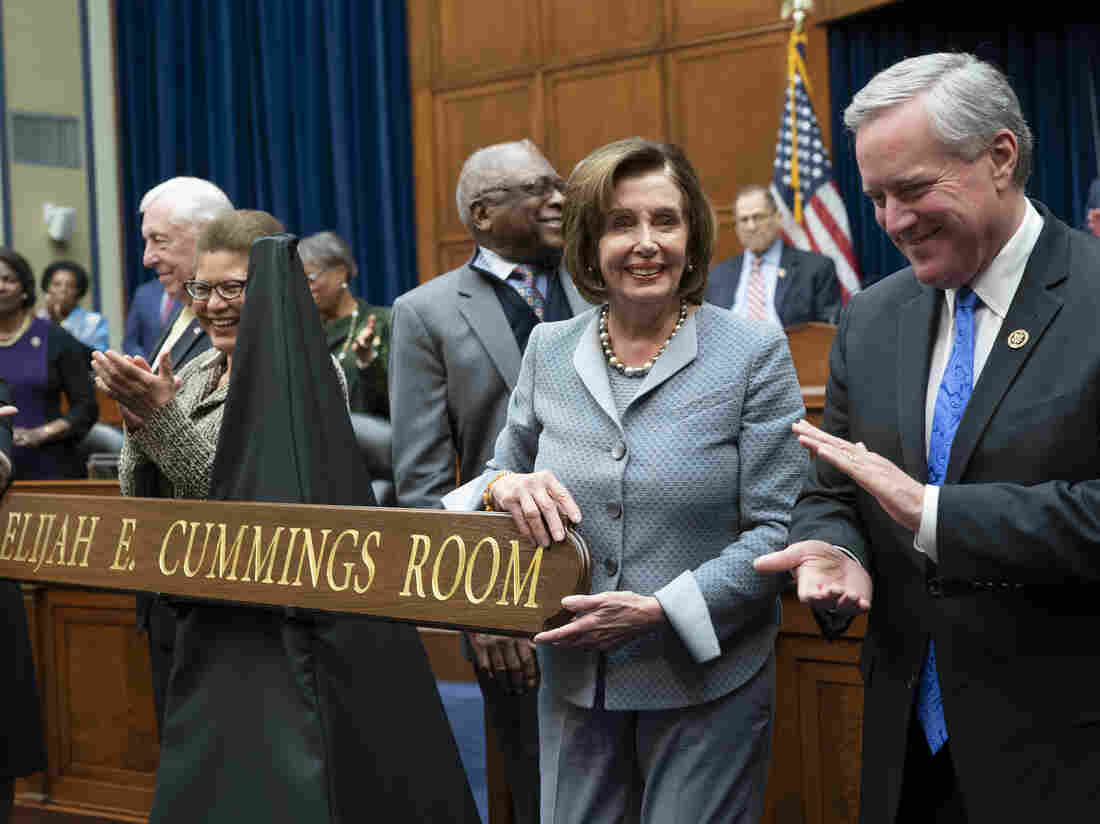 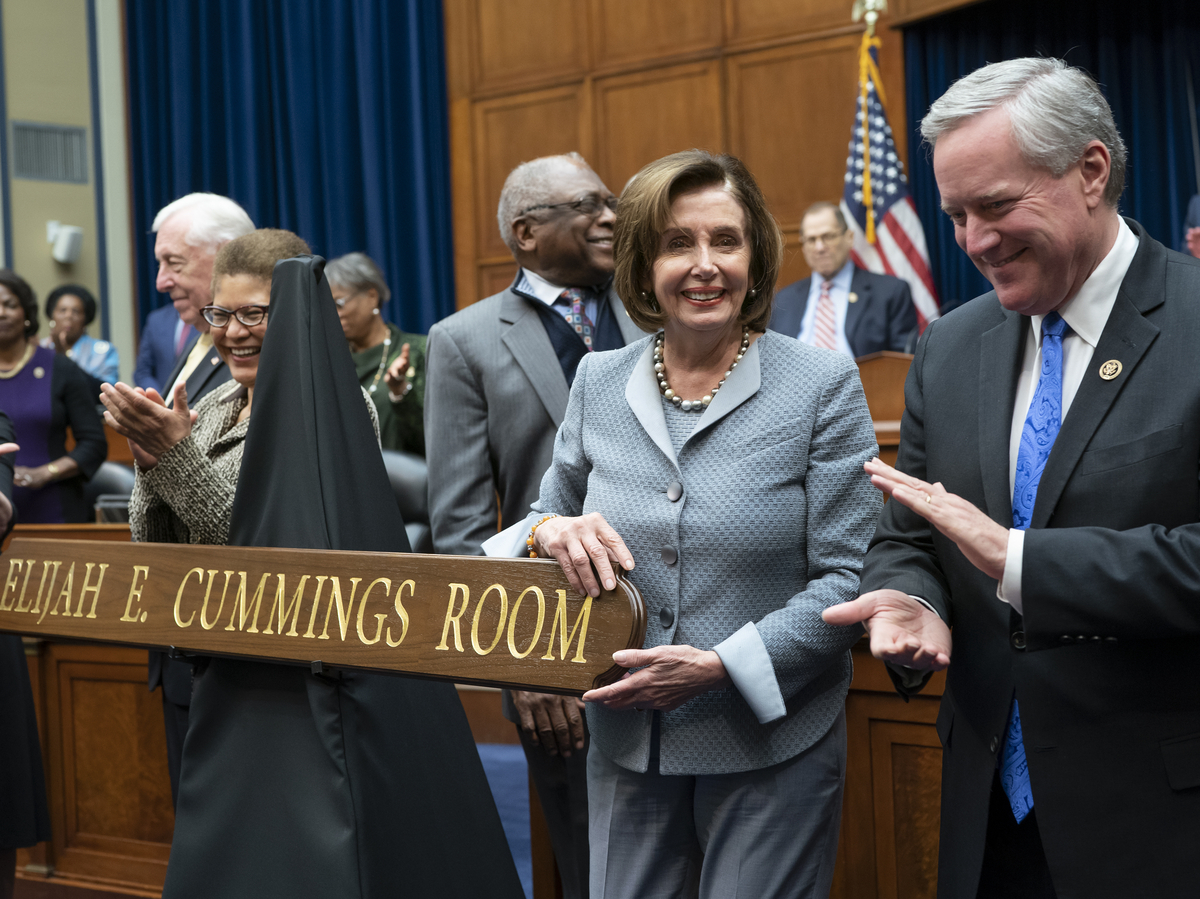 California Democrat Ro Khanna said he figures there are at least 20 Democrats Meadows could call up at any time, which could prove useful if more bipartisan talks are needed on coronavirus aid. Khanna worked with Meadows on a bipartisan war powers resolution that Trump ultimately vetoed, which Khanna takes as a sign Meadows is willing to stand up to Trump.

"My hope is, Mark Meadows is a person of stature and substance and he's not going to be a 'yes-man'," said Khanna. "I think he is somebody who will have the ability to share a candid perspective with the president. I know he has."

But another Democratic congressman who has worked well with Meadows, Gerry Connolly from Virginia, thinks the dynamic could change when Meadows is an aide rather than an outside confidante and cable TV defender of Trump.

"How do you now undertake this new role that requires very different skills and a very different role for you, if you do your job?" Connolly said. "The country kind of depends on it, and that's an open question." 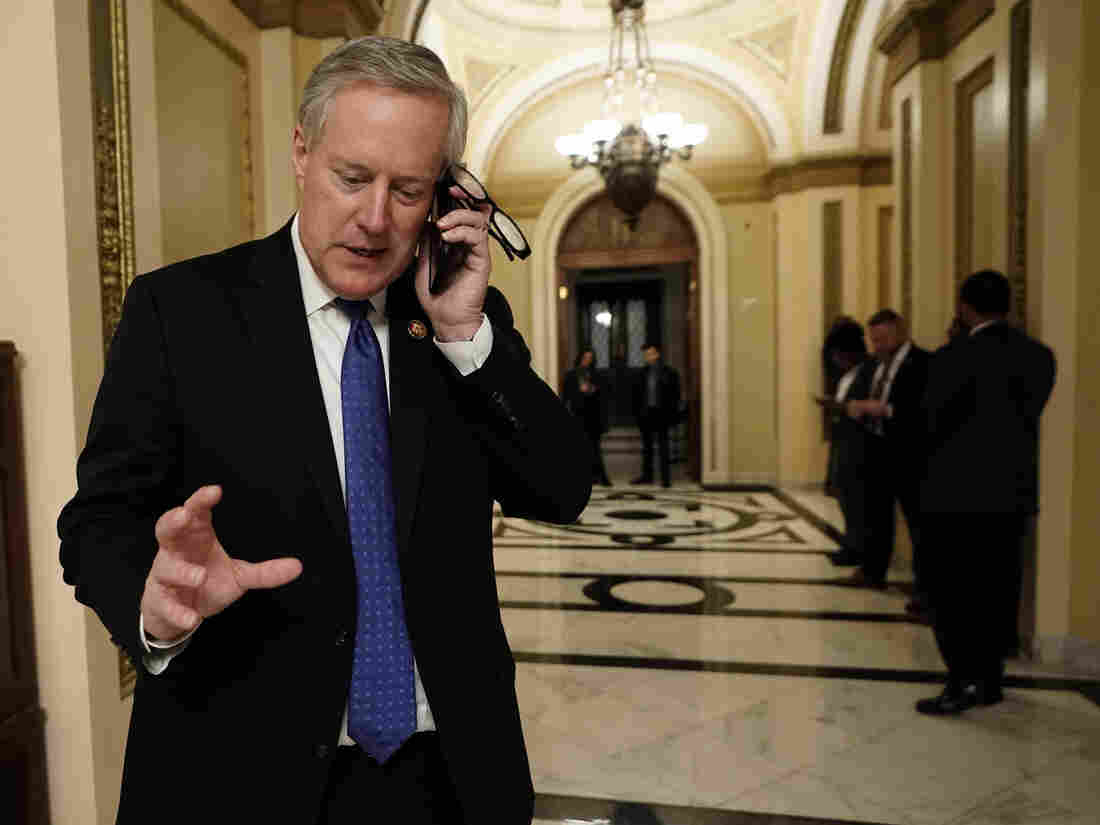 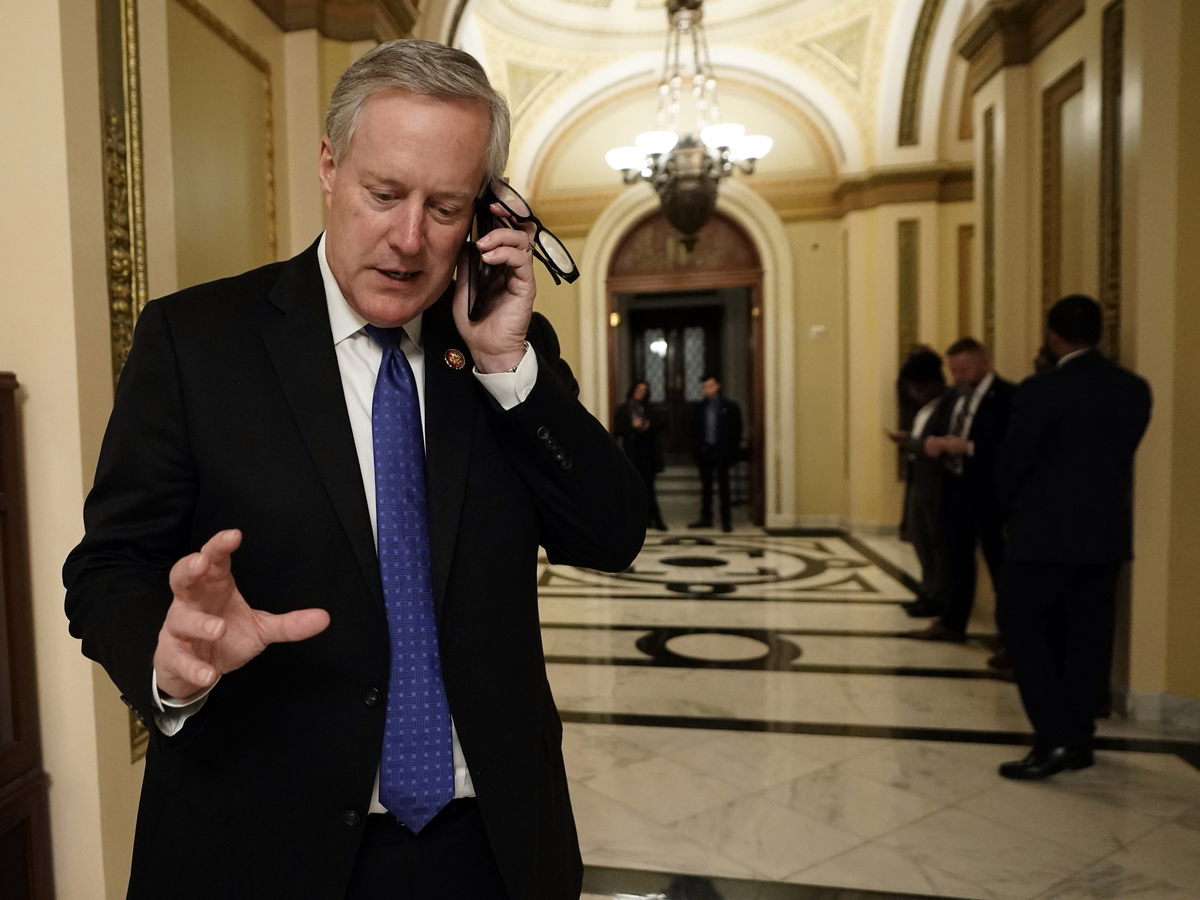 Rep. Mark Meadows, R-N.C., talks on the phone in December as the House of Representatives debated impeaching President Donald Trump on two charges.