Accessibility links
No Need To Empty The ATM, Bank Regulators Say Regulators urge consumers not to drain their bank accounts, after reports of large withdrawals by some customers worried about the coronavirus. The FDIC reminds us the accounts are insured. 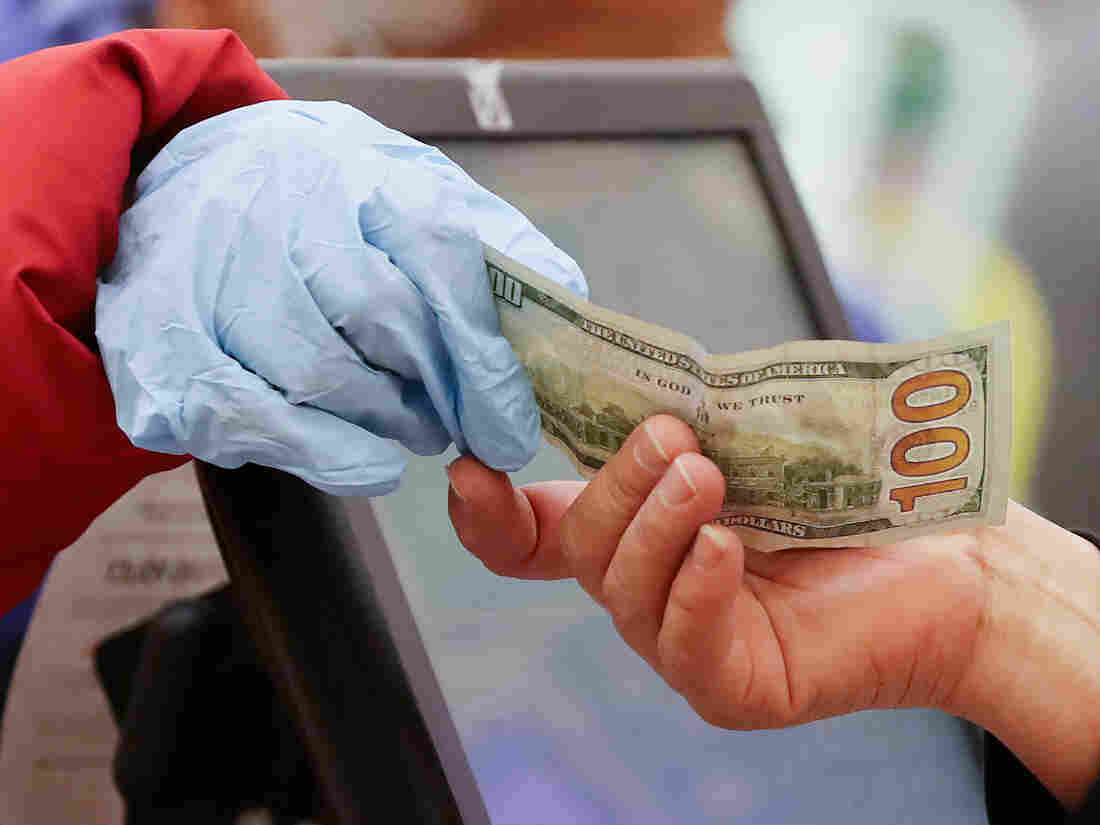 A woman wearing gloves pays for her purchase at a supermarket in Los Angeles. Bank regulators are urging consumers not to hoard cash, after reports of large withdrawals by some customers worried about the coronavirus. Mario Tama/Getty Images hide caption 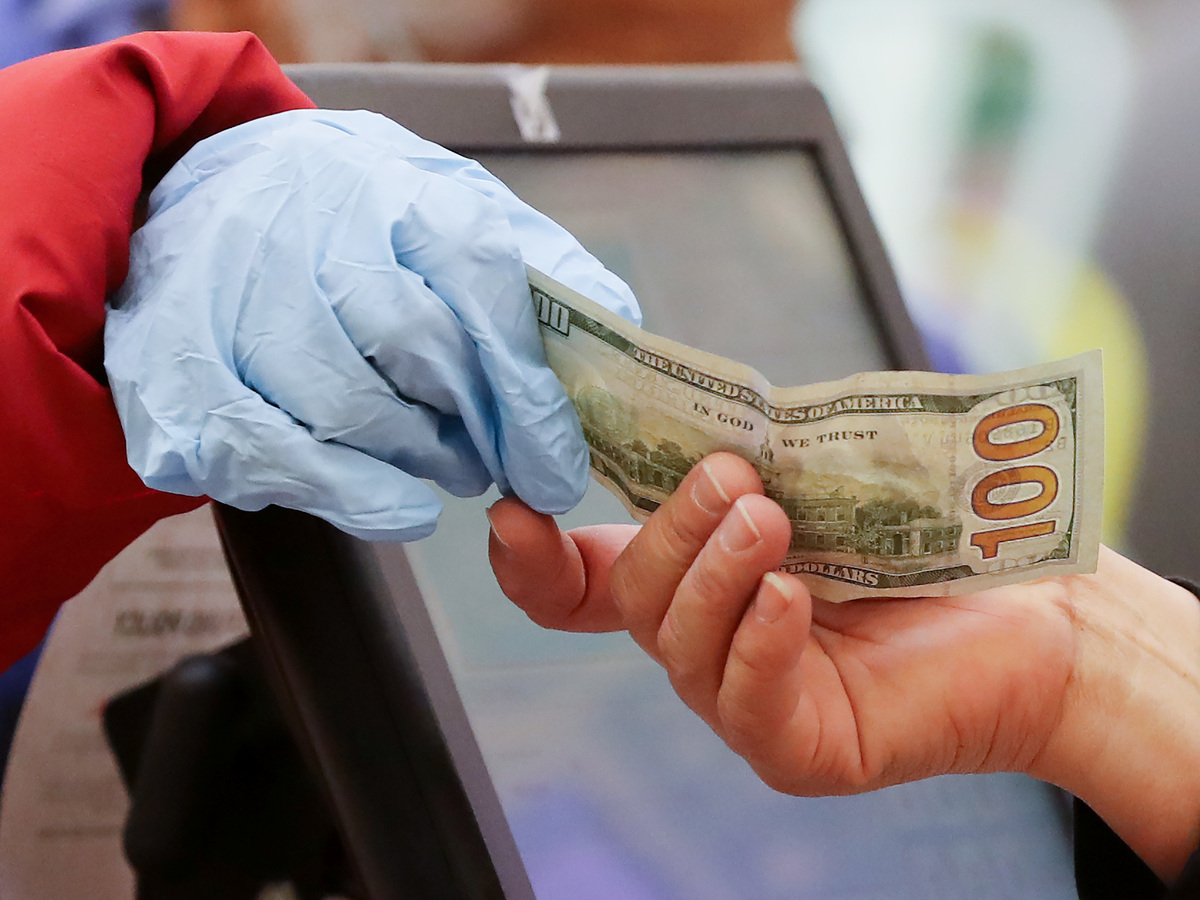 A woman wearing gloves pays for her purchase at a supermarket in Los Angeles. Bank regulators are urging consumers not to hoard cash, after reports of large withdrawals by some customers worried about the coronavirus.

Toilet tissue isn't the only paper product that Americans are hoarding these days. Paper money is also in high demand.

Banks are seeing more cash withdrawals as nervous customers try to protect themselves from the uncertainty of the coronavirus clampdown.

There are reports — especially from wealthy neighborhoods — of people pulling tens of thousands of dollars out of their bank accounts. Demand was so high that one bank branch in Midtown Manhattan temporarily ran out of $100 bills, The New York Times reported. The bank was quickly resupplied the following day.

While stocking your pantry with pasta and canned goods may provide some measure of security, officials say there are risks to keeping too much cash on hand.

Forget the mattress! Keeping large sums of cash at home is risky. The best place to protect your money is in an FDIC-insured bank where it’s safe and sound. Learn how the FDIC safeguards your #money at https://t.co/O2cb1bTUJs pic.twitter.com/R8pFVxBPrM

"Forget the mattress. Forget hoarding cash. Your money is the safest at the bank," said Jelena McWilliams, chairman of the Federal Deposit Insurance Corp., which safeguards bank accounts.

McWilliams understands the anxiety that the coronavirus provokes. She'll confess to making her own panicked grocery run to Costco. But the federal bank regulator says there's no need for customers to empty the ATM.

Some banks have limited hours or even closed branches out of concern for their workers' health. But ATMs are still operating and getting frequent cash deliveries from armored trucks. Treasury Secretary Steven Mnuchin noted this week that armored truck drivers and others who work in financial services are considered essential parts of the nation's critical infrastructure.

Because that infrastructure is still functioning, financial advisers say the race to grab cash is misguided.

"This is not a natural disaster like a hurricane or an earthquake where the electricity is out," said Greg McBride, chief financial analyst at Bankrate.com. "This is the opposite in many ways, in that, if you're holed up at home, having a pile of cash isn't going to do you a whole lot of good."

McBride said homebound customers are better off leaving their money in the bank so they can pay their mortgage and credit card bills online. It also relieves any worry about loss or theft.

Before the coronavirus hit, Americans were steadily moving away from cash and increasingly relying on credit cards, debit cards and new forms of digital payment.

"Even person-to-person payments, that's increasingly done through apps like Venmo or Zelle and not by reaching into your pocketbook, pulling out some green stuff and handing it to your colleague," McBride said.

Of course, millions of Americans don't have bank accounts and may have to rely on cash. Some have suggested that handling paper money may increase your chances of getting or passing on the coronavirus, although there's little scientific consensus on that.

In some cases, people's rush to pull money out of the bank has been stoked by scam artists. The FDIC warned a California gold dealer last week to stop advertising its products with the false claim that consumer bank accounts could be seized in a time of crisis.

"That is absolutely false," McWilliams said. "It's patently false. And frankly it's criminal in my opinion."

The nation's banks came into this crisis in strong financial shape. Even if a bank were to fail, deposits are insured up to $250,000 per depositor per institution.

"Nobody has ever lost any money guaranteed that's been protected by federal deposit insurance," McBride said. "I think that's a point worth underscoring to consumers that are unsettled enough by the events going on from a health standpoint."

A previous version of the Web story incorrectly said that deposits are insured up to $250,000 per account. In fact, the limit is $250,000 per depositor per institution.