Accessibility links
U.S. Forces In Syria Tackle A More Complex — And Possibly Dangerous — Mission American soldiers are helping secure oil fields in northeast Syria — not only from ISIS extremists, but from Syria and Russia as well. It's a relatively new mission for these troops. 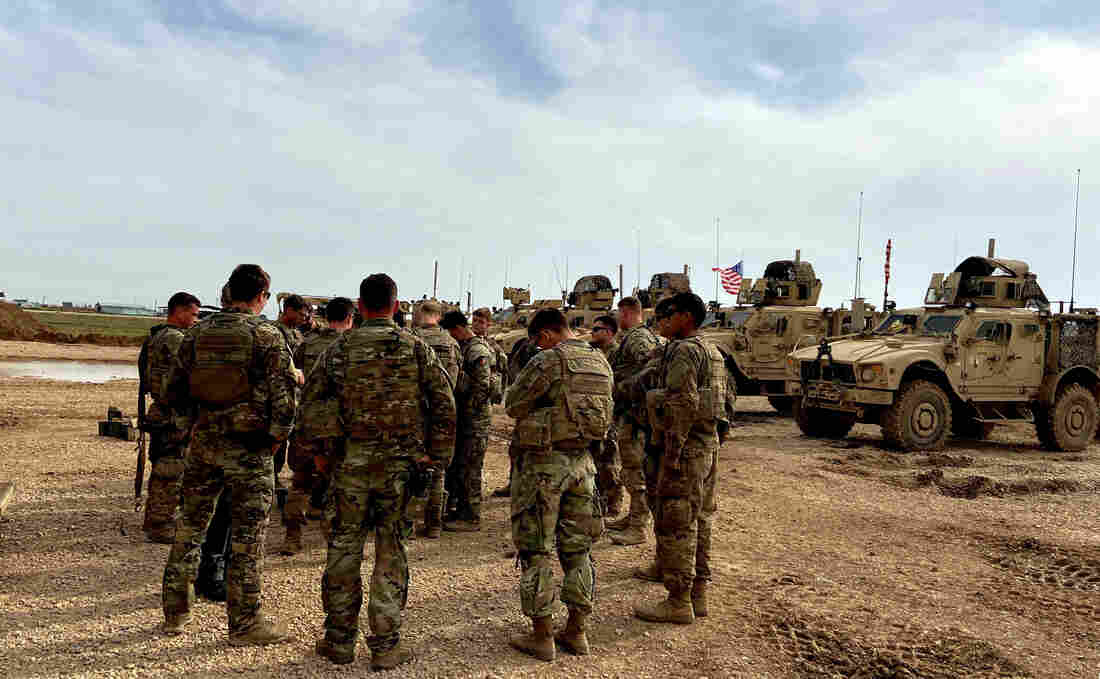 Capt. Alex Quataert briefs the troops before they head out on patrol. Marisa Peñaloza/NPR hide caption

It's early morning in northeast Syria. It's sunny and chilly. Capt. Alex Quataert briefs his soldiers on the day's patrol.

"In the last 48 hours we've had two attacks on critical petroleum infrastructure," he says.

The convoy will visit one of those sites today.

A group of fresh-faced soldiers cluster around in a circle near their hulking armored vehicles, standing in the mud and gravel of this bare-bones combat outpost. It's a drab collection of tents and trailers and massive sand bag walls. He tells his soldiers U.S. forces were stationed at one of the attacked facilities.

"So we're going to have a show of presence there to deter any further attacks on these forces," Quataert says.

The mission for U.S. forces in Syria is now more complex — and possibly more dangerous. Though U.S. forces are doing a variety of things in Syria, 29-year-old Quataert says, "our primary mission is to secure the oil infrastructure for use of our partner force."

Capt. Quataert says his soldiers came under fire from Turkish artillery, and they nearly fired back. Russian troops followed close behind the troops and were able to take over an American outpost. For a while they had to sleep in their trucks before building their new outpost. 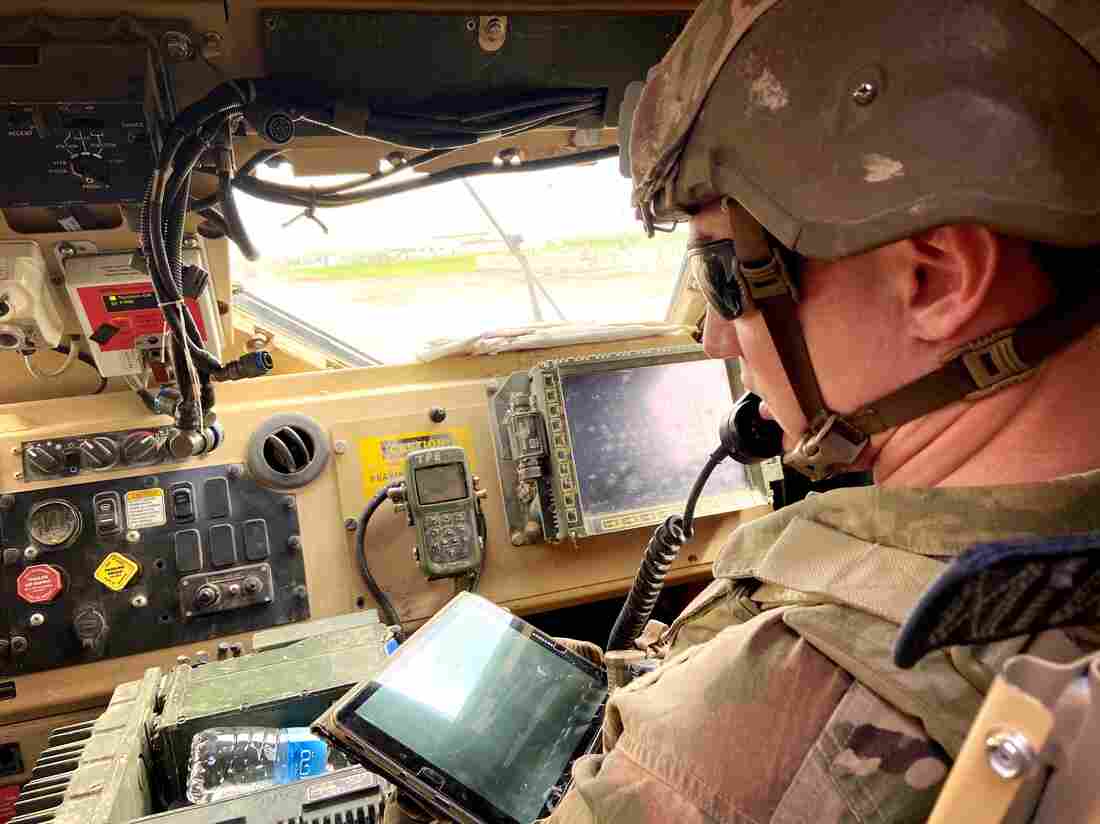 Capt. Alex Quataert points out the areas the soldiers are visiting on the map. Marisa Peñaloza/NPR hide caption 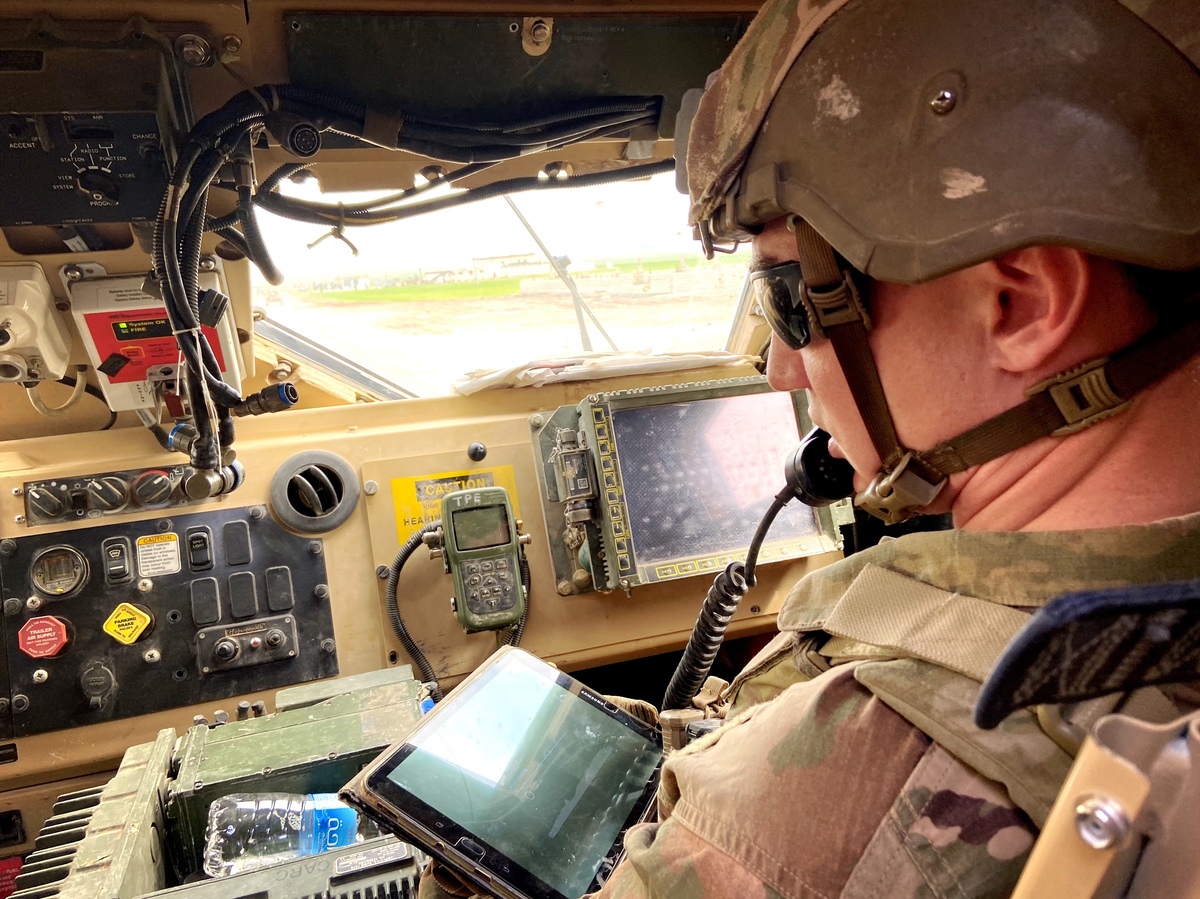 Capt. Alex Quataert points out the areas the soldiers are visiting on the map.

That all happened because President Trump essentially gave the green light for Turkey to invade, then tweeted that all U.S. troops would be leaving Syria. Soldiers here and in neighboring Iraq refer to that order as simply, "the Tweet."

But Trump reversed himself because military officials convinced him. The White House allowed hundreds of U.S. troops to stay and secure the oil fields for Kurdish forces.

U.S. forces in Syria work with a group of Kurdish and Arab fighters, known as the Syrian Democratic Forces, the SDF.

"They are the partner force that primarily defeated the physical caliphate — the actual ISIS-controlled area," says Quataert, a small, compact and serious West Point graduate from Rochester, N.Y. He says ISIS is not defeated yet.

"They still have a lot of fight left to give," he says. "ISIS has become a guerilla force. They are still active, especially further to the south."

This convoy rumbles north, through farmland that stretches green and unbroken to the horizon. One of the few landmarks visible is the tell-tale sign of an oil facility — a gas flare. It's a long thin tower with a tongue of yellow flame.

In recent weeks Quataert's soldiers have, again, come under attack from Syrian government militias, an attack that ended with one militia member dead and another wounded. The Russians routinely harass and confront the American patrols, provoking them with their erratic driving. The Americans block them or head them off. Quataert dryly calls it, "not necessarily a friendly situation."

What the Russians don't know is that the captain has a secret weapon.

Near The Turkish Border, Syrian Civilians Cautiously Assess A Cease-Fire

Near The Turkish Border, Syrian Civilians Cautiously Assess A Cease-Fire

"When we stop for the mission, I'm in the background and I don't even tell them I speak Russian because the whole job is to gather information," says Sgt. Vlad. He's a former Russian soldier who ended up in North Carolina and joined the U.S. Army. He asked that his full name not be used for security purposes.

Vlad says that lately the Russians have been playing tricks on the roads --speeding and jumping the blockades set up by the Americans, "and once in a while, you'll get lucky where a Russian vehicle gets stuck in the mud and they can't go anywhere. And the Russians keep going in and they realize we can't leave our brothers behind. They come back and we've got him trapped."

Despite the cat and mouse game, there have so far been no dangerous encounters. It seems neither country wants an escalation. Quataert says they aren't going to start World War III over this.

The convoy enters the city of Dirik, a bustling town not far from the Turkish border. Children flash the peace sign and run along the convoy through city streets. Others wave. Many adults run out of their homes and stare. The soldiers are here with the goal of getting information from the locals, ask what they're seeing and hearing. And how safe they feel. The Americans fan out and set up a defensive perimeter near a variety store.

Quataert walks in and talks to the man behind the counter, Mohammed Abdullah Ismael. Kurdish music plays in the background and several customers are milling around the store.

Ismael is a 40-year-old father of five children ages one to 16. He's a short balding man, a Kurd with a sad face though he flashes a smile when he spots the soldiers walking into his store. 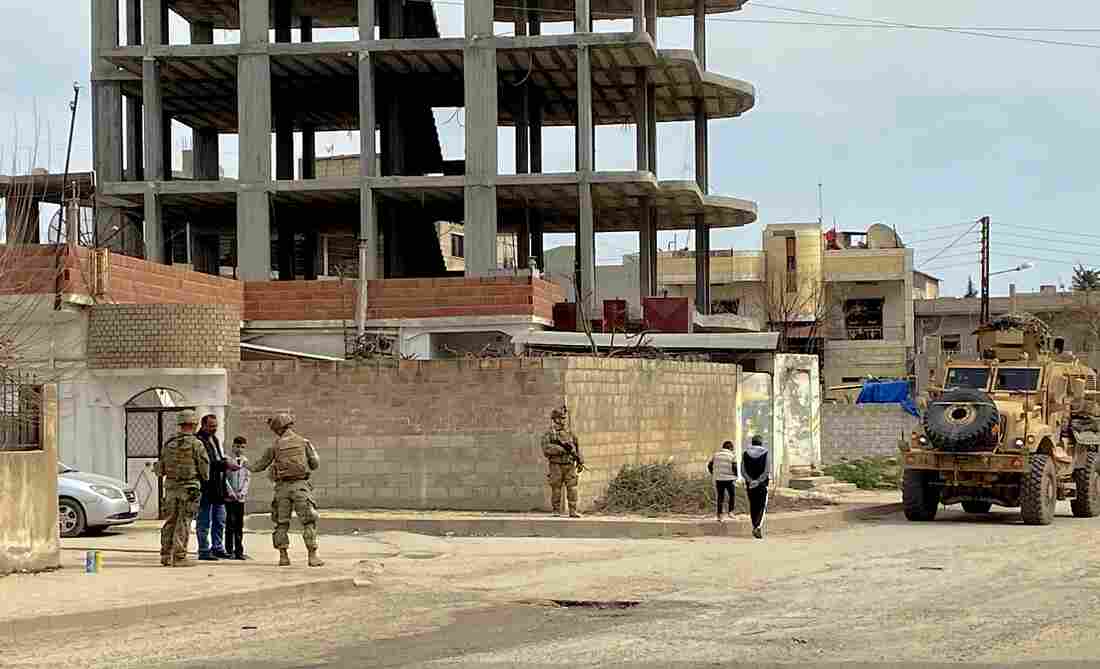 "How are you doing guys?" he asks. "When you guys are here we always feel safe."

What happens when the Americans leave?

"When the Americans leave there's no stability and security in the area," Ismael says, adding that his number one, biggest fear is Turkey.

That's because the Turks see the Kurds around here as a threat, allied with Kurdish separatist in Turkey.

Ismael's store is well-stocked with groceries, cleaning supplies and a wide variety of nuts. Large bins filled with pistaccios, walnuts, cashews and many other Syrian snacks fill a wall. Two 12-year-old boys, including one of Ismael's children, help customers buying dates and other Syrian staples. The soldiers stock up on Mars chocolate bars made in Russia, Pringles and soft drinks. 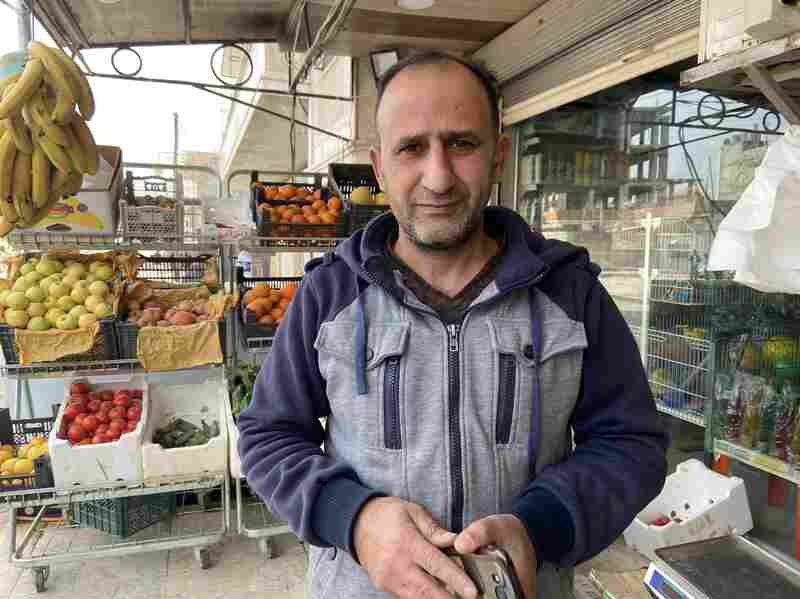 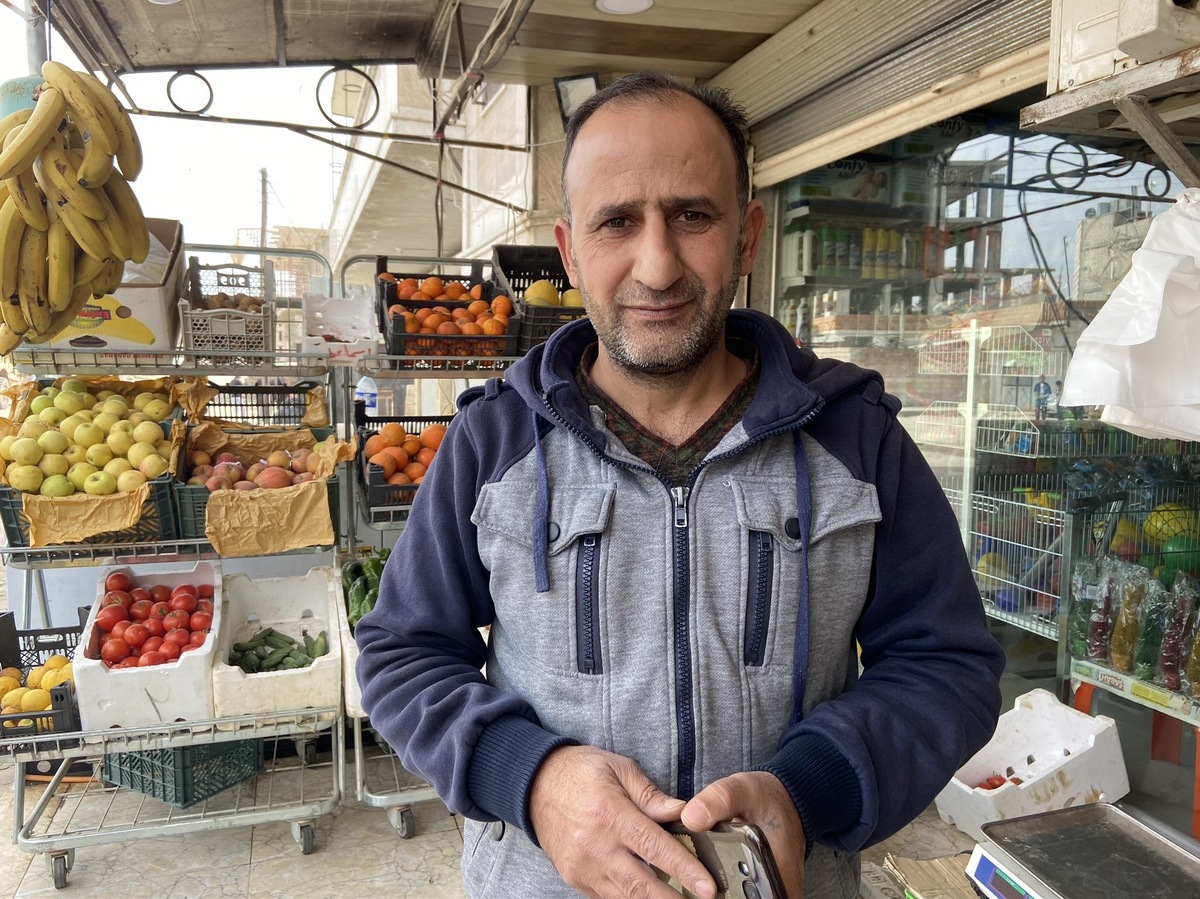 Soon the soldiers move on. As they walk the streets, a man and his small child perched on the front of his motorcycle stop to greet them and thank them for their visit. The group stops at a bakery and at a restaurant too. Quataert asks the owners the same questions: have you seen Russians around, do you feel safe? People nod and smile.

Next, the convoy heads to an oil facility. It's a worn collection of pipes and tanks, closer to the Turkish border — so close you can spot a Turkish flag at an outpost.

It was here, before dawn on two consecutive days that a drone struck, dropping mortars, where soldiers from the West Virginia National Guard were helping secure the oil facility.

"They hit us with one mortar. It was around three o'clock in the morning and I got my guys up, we were out in two minutes," says Sgt. 1st Class Mitch Morgan, as he points to the destruction. 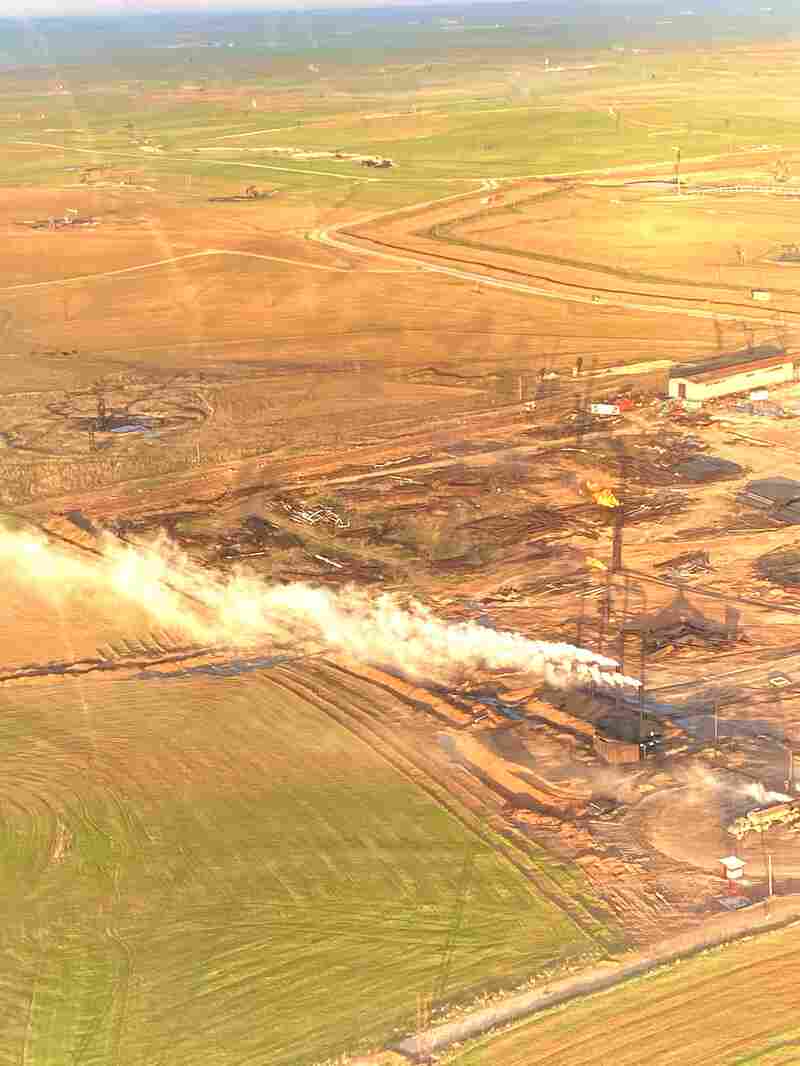 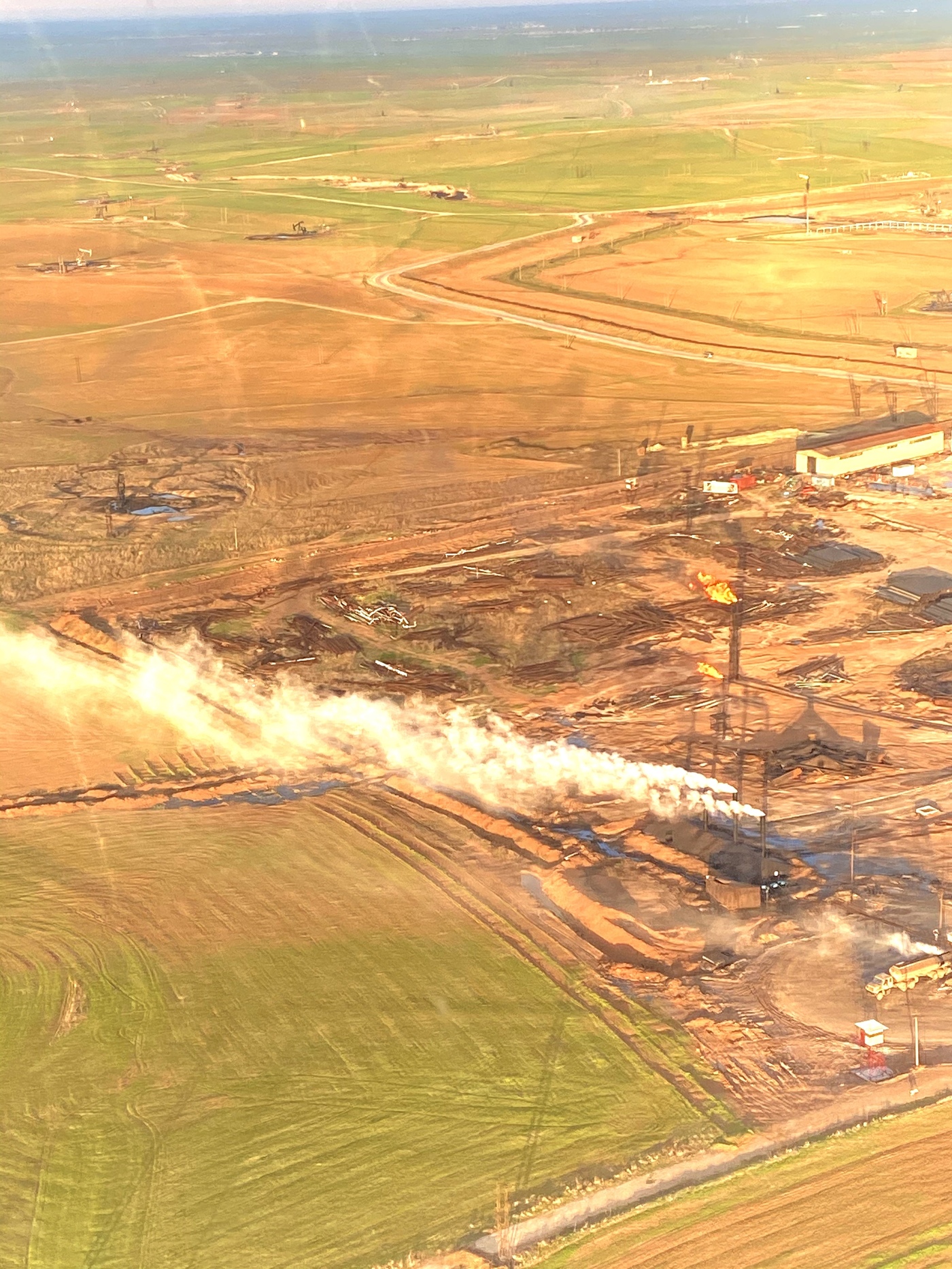 An oil field in northeast Syria.

There's a hole in a concrete side walk the size of a Frisbee and several inches deep. Morgan, a detective in the civilian world in Charleston, W.Va., says that one of the mortars barely missed him.

"As we were mounting up in our vehicles," he says, pointing to the side door of a Humvee. "You see the paint missing?" Shrapnel hit that door, he says.

The West Virginia troops were ordered to leave Syria for Kuwait, shortly after the second attack. Other soldiers will take their place, Quataert says. The next platoon will bring along a handheld jamming device — the captain says it looks like the weapon from Ghostbusters. It can disrupt the drone's signal and force it to land. That way investigators can learn its origins.

The Kurds blame Turkey. U.S. suspicion points to the Syrian government militias, who operated just a half hour away. The mortars show some sophistication. At least one of the components was made with a 3-D printer.

For the next several months, Quataert and his soldiers will continue these patrols. Then they'll head back to Alaska and pass the job off to other Americans.