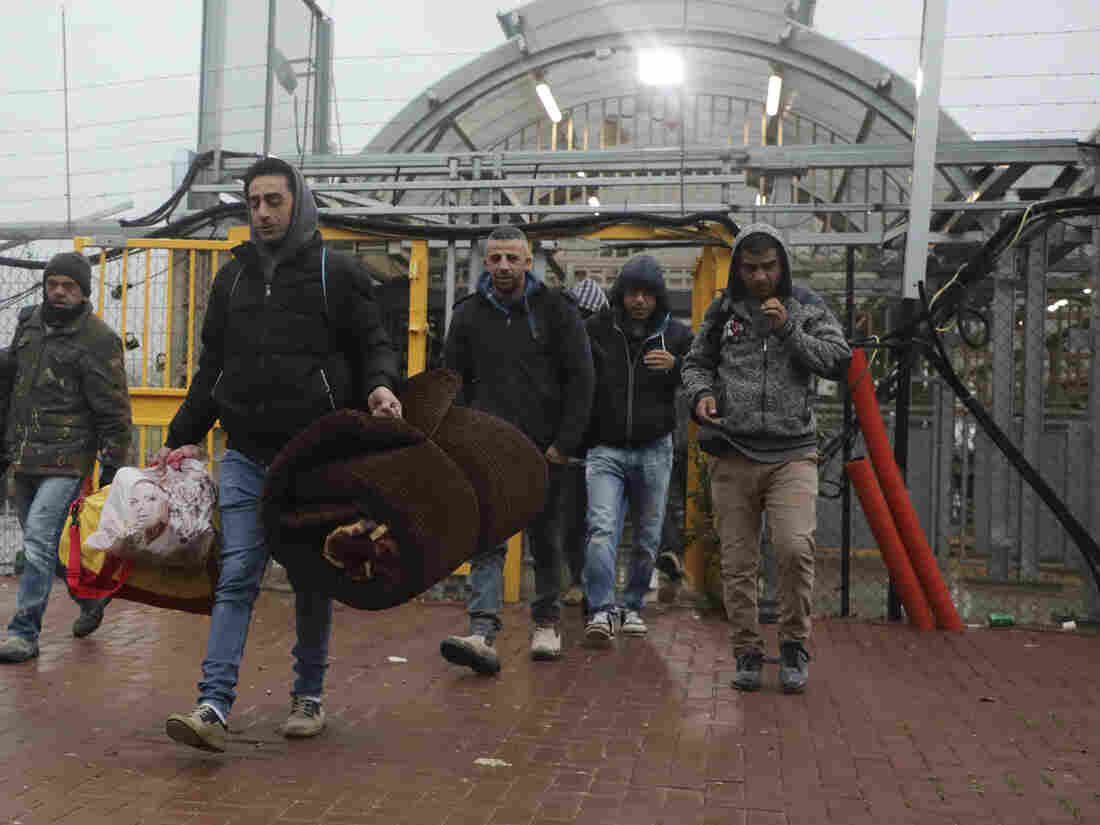 Palestinian laborers enter Israel on March 18 through a checkpoint between the West Bank city of Hebron and Beersheva. They carry blankets and mattresses, in preparation to stay in Israel amid the coronavirus pandemic. Hazem Bader/AFP via Getty Images hide caption 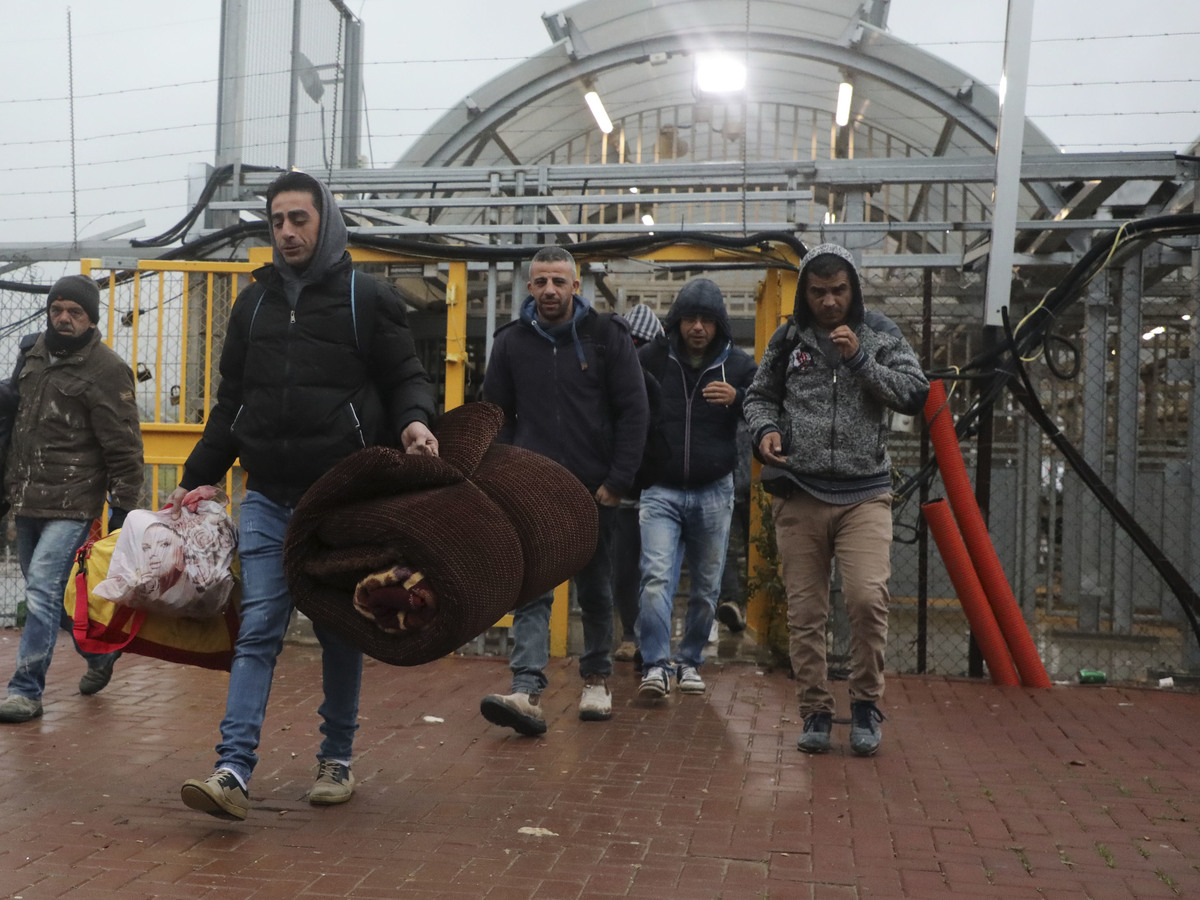 Palestinian laborers enter Israel on March 18 through a checkpoint between the West Bank city of Hebron and Beersheva. They carry blankets and mattresses, in preparation to stay in Israel amid the coronavirus pandemic.

As COVID-19 spreads through Israeli and Palestinian communities, Israelis and Palestinians now have a common enemy to battle — and reason to lean on each other.

Israeli hospitals, buckling under the pressure of hundreds of new virus cases a day, rely on Palestinian doctors who are citizens of Israel, as well as some Palestinian hospital staff from the West Bank, who must pass through Israeli military checkpoints to work in Israeli hospitals. 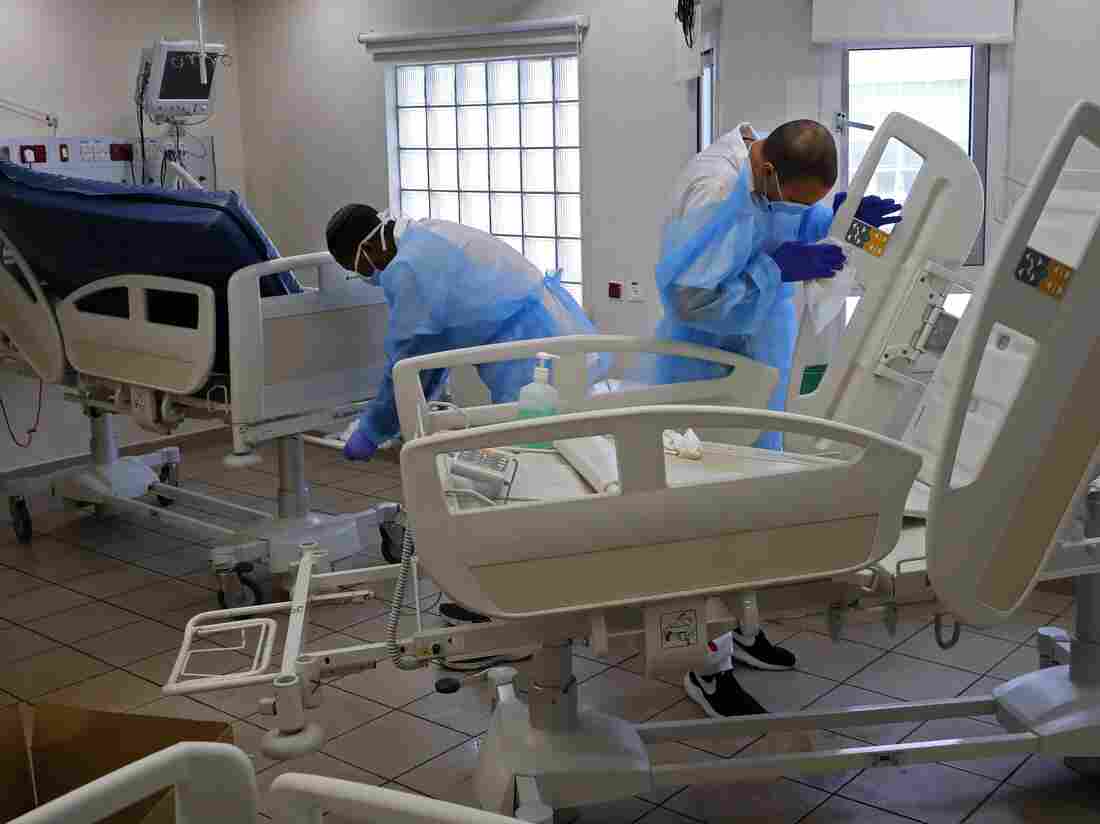 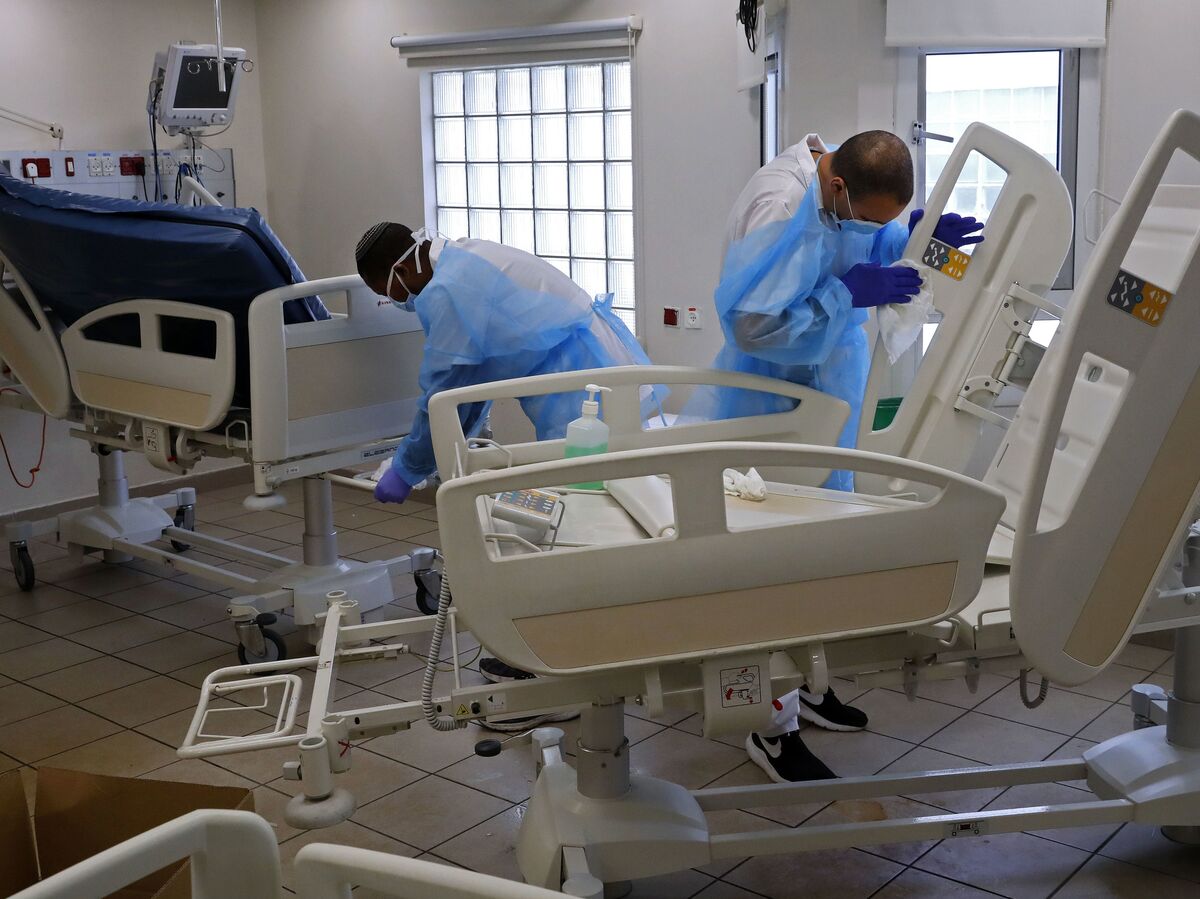 "Maybe people will remember this as a time when they treated each other as humans," a Palestinian newspaper journalist told NPR. He insisted on anonymity because in the ongoing Israeli-Palestinian conflict, public expressions of compassion remain controversial.

With the bar for empathy set so low, the simple act of Israelis and Palestinians acknowledging the common threat they face is noteworthy. Israeli President Reuven Rivlin spoke with Palestinian Authority President Mahmoud Abbas last week about coordinating efforts on fighting the virus, in a rare telephone call between the two.

A public opinion poll on Tuesday found 68% of Palestinians support the Palestinian Authority's current cooperation with Israeli authorities to stem the spread of the virus. Some Israelis have voiced their gratitude on Twitter and television for the Palestinian Arab citizens who make up 17% of Israel's doctors, a quarter of its nurses and nearly half its pharmacists.

Israel has sealed its borders to all foreign visitors, but not to the Palestinian laborers who help keep Israel's economy alive. Before the pandemic, about 150,000 Palestinians worked in Israel and Israeli settlements. Now, an estimated 30,000 to 45,000 day laborers, most of them construction workers, have made the difficult choice to work and sleep in Israel for months, without knowing when Israel's lockdown, which began over a week ago, will end and when they can go back to their families in the West Bank. Their alternative: remain in the poorer West Bank, where jobs are scarce.

With no tourists in Israel now, some Israeli employers have put up Palestinian laborers in Israeli hotels. In other cases, workers have slept in the apartments they finished building before Israeli owners moved in, said Ziv Lazar of the Israeli Builders Association.

As cases of the virus soar in Israel, Palestinian leaders have called on laborers to return home and quarantine themselves, alarming Israel's association of construction contractors.

"The damage that will cause will be enormous," said Shai Pauzner, spokesman of the association.

For critics of Israel's tough policies toward the Palestinians, the coronavirus underscores the inequalities of a West Bank population under Israeli military occupation and dependent on Israel's medical aid and labor market.

They warn that some 2 million residents of the blockaded and beleaguered Gaza Strip could face disaster, should the virus spread due to a perfect storm of deficient hospitals with few ventilators and most of the population poor and living in crowded conditions.

"COVID-19, or any other health crisis, is not an equalizer. To praise Israeli-Palestinian cooperation suggests that the parties are on an equal footing when they are not," Tareq Baconi of the International Crisis Group tweeted.

Some Israelis also have voiced skepticism about cooperation. "Optimism for coexistence born out of working with the [Palestinian Authority] to combat the coronavirus is a pipe dream," says Gerald Steinberg of the Israeli group NGO Monitor, which tracks critique of Israel by pro-Palestinian and international rights groups around the world. "The ongoing demonization and political war against Israel, continuing unabated despite the global corona disaster, is an important reality check for all of us."

For the few card-carrying peace activists whose optimism hasn't fallen victim to decades of violence and hate, though, the virus offers an opportunity.

Nidal Fuqaha of the Palestinian Peace Forum recently hosted several Palestinian friends for a Zoom videoconference with former Israeli politicians and defense officials who wanted to know how Palestinians are handling the coronavirus, and is holding another video call with Israelis next week. The virus lockdowns make it easier to convince people to participate in these talks, he said — no more excuses to avoid face-to-face meetups, which the virus has made impossible.

"I hope we will both learn good lessons from this crisis," Fuqaha said. "Whether it will change the discourse, frankly, I am not sure. But definitely it will contribute to changing the paradigm for the future. You know, this corona pandemic sent a clear message to both Israelis and Palestinians that the issue of cooperation and coordination, and arranging or dealing with such situations jointly, is a must."

Safaa Odah, 35, a Palestinian cartoonist in the Gaza town of Rafah, returned this month from a pilgrimage to Mecca and went straight into home quarantine. She drew a cartoon of a Jew, Christian and Muslim fighting — before they dart to pray side by side as the coronavirus barges in the door.

"You know what," Odah said in an interview, "the corona doesn't care about religion. Doesn't care where you live."

Maizie Avihayil, 62, an Israeli elementary school teacher from the West Bank settlement of Kiryat Arba, tested positive for the coronavirus a couple weeks ago. Israeli health officials published where she'd been, as they do with all virus cases to alert the public.

That is how Israelis in her settlement discovered that she had been in an unusual place for an Israeli settler: She'd traveled to the Palestinian town of Beit Jala for a workshop with Palestinians on nonviolent communication.

"One of my colleagues said, 'Wow, when this corona [pandemic is over], I am going to come to one of these meetings!'" Avihayil said in a phone call from a Tel Aviv hotel now serving as a quarantine center.

Acclaimed Israeli novelist David Grossman, who was awarded the 2017 Man Booker Prize, mused about radical changes in perspective the virus may bring.

"When the plague ends, there may also be those who will not wish to return to their former lives," Grossman wrote in the Israeli newspaper Haaretz. "Some will decide to leave their family. To separate from their partner. To bring a child into the world, or precisely to refrain from that. There will be those who will come out of the closet (out of all manner of closets). Some will start to believe in God ... Possibly there will also be some who will for the first time wonder, for example, why Israelis and Palestinians continue to do battle against each other, afflicting their lives for more than a hundred years with a war that could have been resolved long ago."

The author closed with these words: "Even if it does come to pass, I fear that it will fade away quickly and things will go back to what they were before we were plagued, before the flood."

Sami Sockol contributed to this report from Jerusalem.