Accessibility links
U.S. Charges Nicolás Maduro Of Venezuela With Drug Trafficking The government is accused of letting Colombians linked with the Revolutionary Armed Forces of Colombia use its airspace to fly cocaine north through Central America to destinations in North America. 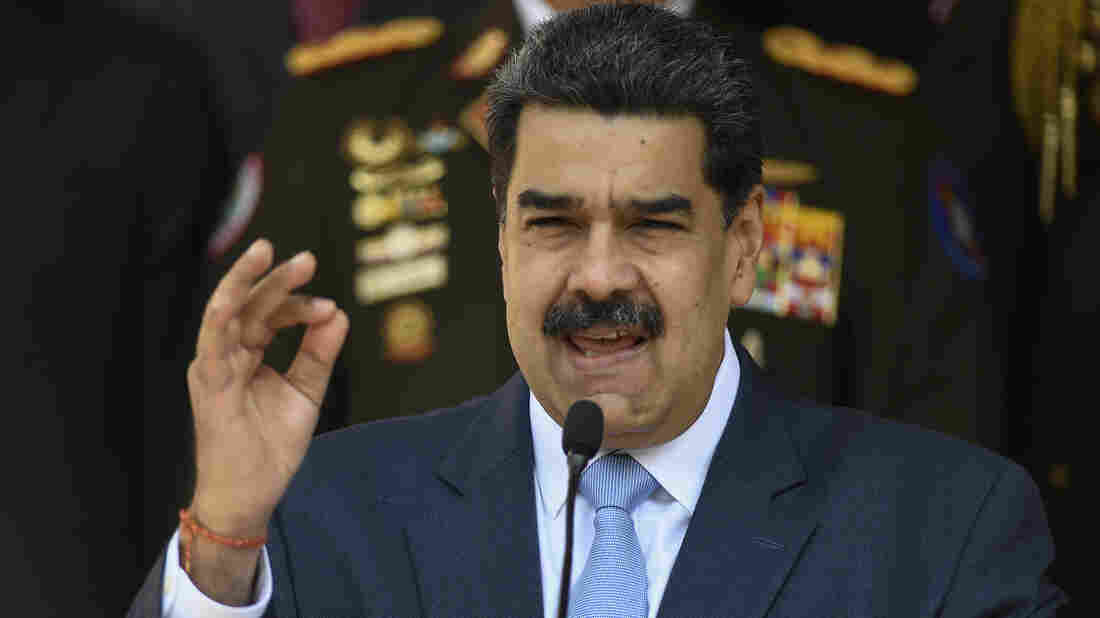 Venezuelan President Nicolás Maduro is unlikely to be arrested and tried in the United States on the drug charges announced Thursday. Matias Delacroix/AP hide caption 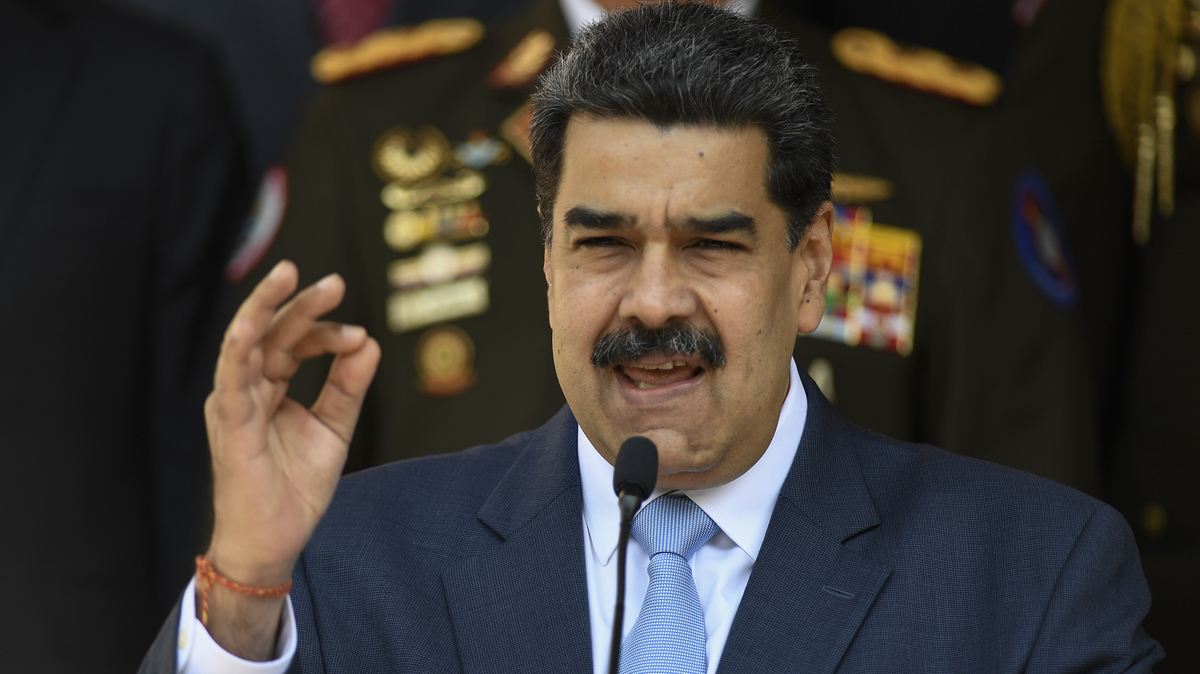 Venezuelan President Nicolás Maduro is unlikely to be arrested and tried in the United States on the drug charges announced Thursday.

The Justice Department unsealed criminal charges against Venezuelan President Nicolás Maduro and other regime heavies on Thursday in connection with alleged narcoterrorism and drug smuggling into the United States.

Attorney General William Barr announced the charges at the Justice Department in Washington with some officials in attendance and others connected via teleconference — precautions taken because of the coronavirus pandemic.

The charges involve 15 defendants, including Maduro and other political and military leaders in Venezuela. The regime is a cesspit of corruption, Barr alleged, as the strongman and his lieutenants have abetted smuggling and, Barr said, laundered money for drug traffickers.

Venezuela also is accused of permitting Colombians linked with the Revolutionary Armed Forces of Colombia — the People's Army, known by its Spanish initials, FARC — to use its airspace to fly cocaine north through Central America to destinations in North America, Barr said.

The U.S. Attorney for the Southern District of New York, Geoffrey Berman, said the scheme between the Colombians and Venezuelans had been operating for some two decades and represented a deliberate strategy by Maduro's regime to "flood the United States with cocaine."

In defense of the charges

The Justice Department officials defended the decision to charge a foreign head of state and other government leaders because, among other reasons, they said Maduro and the others had broken U.S. law, putting the matter squarely within the power of the department.

Barr also observed that Washington does not consider Maduro to be Venezuela's rightful president. He also said that making the announcement in a Justice Department headquarters emptied out for the coronavirus crisis was a coincidence of timing.

"We moved on these cases when we were ready to do it," he said.

The law enforcement officials also said there were strategic reasons to try to put pressure on Maduro's regime over the type of smuggling they said he permits — via an "air bridge" over Venezuela.

Barr said interdiction by America and its allies of contraband at sea has increased in recent months — in cases, for example, in which the U.S. Coast Guard stops speedboats or semi-submersible vessels that ferry drugs north in the Eastern Pacific Ocean or in the Caribbean Sea.

That increases the importance of the "air bridge," Barr said, which compels action by American authorities to try to constrain it by exposing the Venezuelan regime's involvement.

"As we increase our interdiction in both oceans, we are concerned this is being developed as a way of avoiding our maritime interdiction — which makes going after this particular route important for us right now," Barr said.

Months of pressure on Venezuela

The announcement of the charges followed months of pressure by President Trump's administration on Maduro's regime, which the United States considers illegitimate following an election deemed unfair by many world powers.

Washington has supported alternative political forces in Caracas against Maduro and Trump invited the man he recognizes as Venezuela's leader, Juan Guaidó, to the State of the Union address this year.

Maduro is unlikely to be arrested and tried in the United States, but Berman noted that the State Department has offered a $15 million reward for his capture.

Law enforcement officials also said that live indictments in the United States justice system complicate the ability for Maduro or his cronies to travel outside Venezuela, and certainly for them to try to travel to the United States.

The Justice Department does have a track record of bringing major drug offenders to face trial, including Mexican drug kingpin Joaquín Archivaldo Guzmán Loera — the infamous "El Chapo" — who was convicted in Brooklyn last year and sentenced to life in prison plus 30 years.