Accessibility links
Coronavirus Update On Relief Bill, Equipment Trump said he believed the federal government has been working well with most states in the disaster but he griped about complaints reported by some Democratic governors. 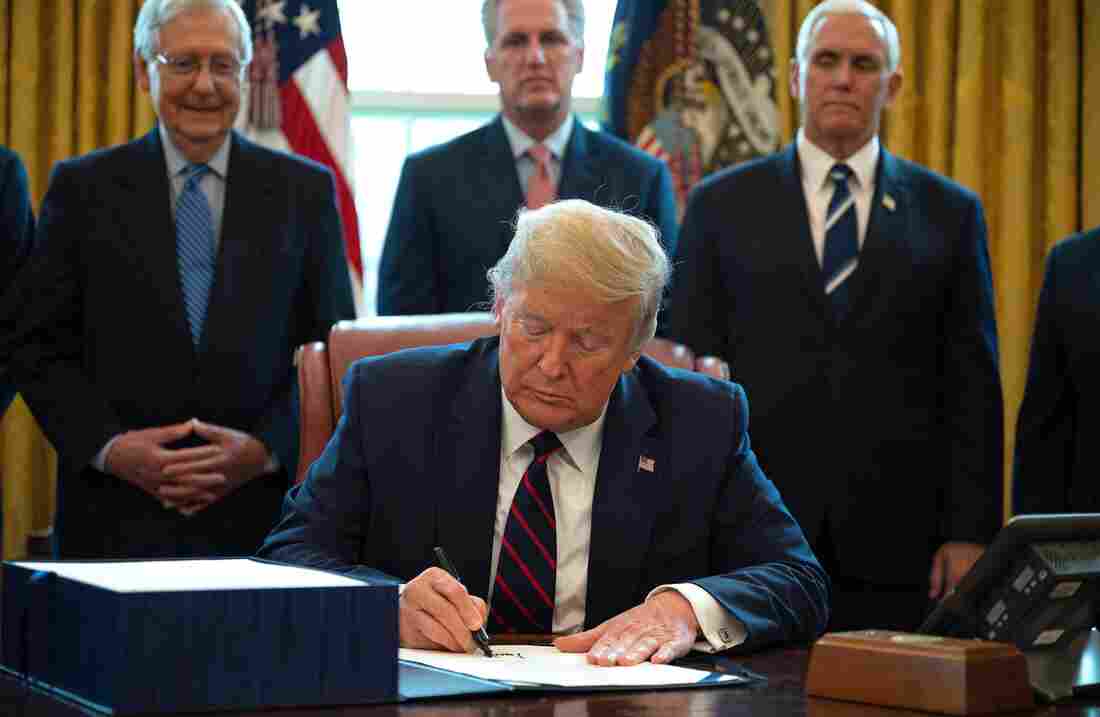 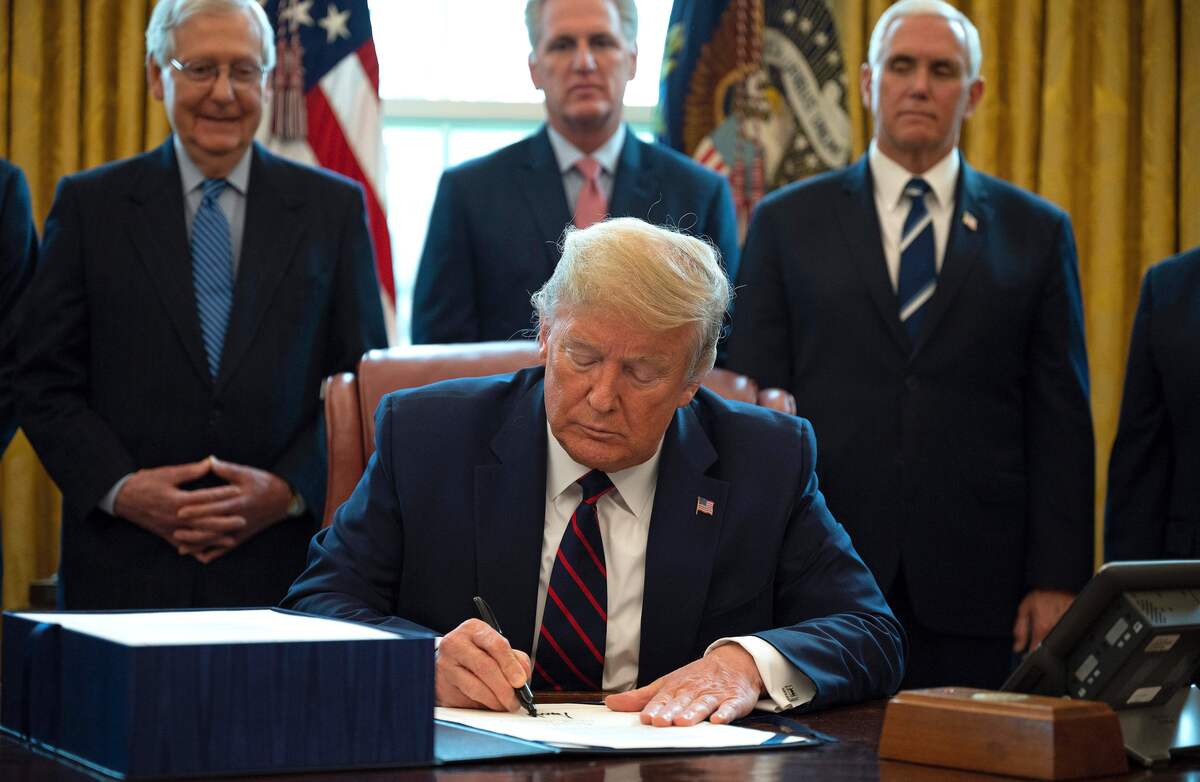 President Trump signs the CARES Act, a $2 trillion rescue package to provide economic relief amid the coronavirus outbreak, at the Oval Office on Friday.

President Trump signed an historic $2 trillion coronavirus relief package on Friday just hours after the House approved it amidst the deepening crisis over the pandemic.

"This will deliver urgently needed relief to our nation's families, workers and businesses. And that's what this is all about," Trump said at a signing ceremony in the Oval Office.

The legislation signed on Friday was the subject of bipartisan agreement in Congress and is one of the largest relief packages in American history. The bill includes billions in business loans, along with direct payments to Americans and an expansion of unemployment insurance.

With that action and with the U.S. now past 100,000 coronavirus cases, the White House task force convened its latest briefing early Friday evening.

Trump said he believed the federal government has been working well with most states in the disaster but he griped about complaints reported by Gov. Jay Inslee of Washington and Gov. Gretchen Whitmer of Michigan, both Democrats.

Trump didn't identify the governors but alluded to Inslee's failed presidential primary bid and to criticism of the federal response by Whitmer.

"I want them to be appreciative," Trump said. "I think the media and governors should appreciate it."

The president gave a description that suggested that Pence has continued to serve as an interlocutor for those cases or others but Trump bristled about Inslee and "the woman in Michigan."

Hi, my name is Gretchen Whitmer, and that governor is me 👋

I've asked repeatedly and respectfully for help. We need it. No more political attacks, just PPEs, ventilators, N95 masks, test kits. You said you stand with Michigan — prove it. https://t.co/FtWlTLZdqW

Whitmer said on Twitter late Thursday that all she wanted was for the federal government to execute its responsibility to help the Wolverine State with medical equipment and supplies.

Earlier Friday, Trump issued a memorandum ordering the use of the Defense Production Act to compel General Motors to prioritize federal contracts for ventilators.

In a statement, Trump said:

"Our negotiations with GM regarding its ability to supply ventilators have been productive, but our fight against the virus is too urgent to allow the give-and-take of the contracting process to continue to run its normal course. GM was wasting time. Today's action will help ensure the quick production of ventilators that will save American lives."

GM said Friday it was "working around the clock for over a week to meet this urgent need."

Trump said he was appointing his economic adviser, Peter Navarro, as the administration's coordinator for cases under the Defense Production Act.

Navarro and Trump said they grew weary of what they described as quibbling by GM and another health care vendor, Ventec, about the costs for the units.

Trump and Vice President Pence had previously said that private companies were stepping up without the administration needing to invoke the Defense Production Act.

Trump said Friday that he decided that, in fact, the law should be used in the case of GM and that American companies should now stand advised that Trump is willing to use all of his lawful authority as he responds to the disaster.

Asked about the prospect that compelling an order like the one contemplated with GM might mean a glut of machines in excess of need, Trump said the United States might begin supplying them to other nations suffering in the pandemic.

For example, Trump said he'd spoken with U.K. Prime Minister Boris Johnson — who has himself tested positive for COVID-19 — and Trump said Johnson had asked him for ventilators for Great Britain.

"I hope we're going to have leftovers so we can give some to other countries," Trump said.

The president used part of his press conference to praise the work he said other companies are doing in the coronavirus response, including manufacturers, health care companies and Big Tech.