Accessibility links
Trump's Approval Rating Is Up, But That's Not The Full Story Amid the pandemic, President Trump's approval rating has risen, but it's not the kind of increase other presidents have seen in other rally-around-the-flag moments. 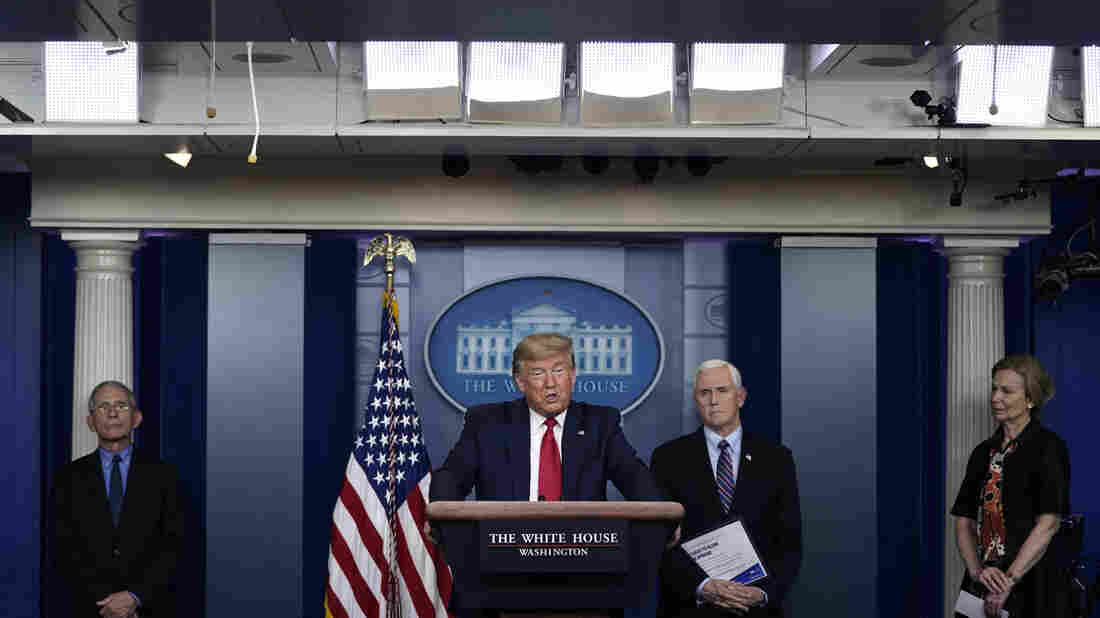 President Trump's approval rating has risen, but it's certainly not the kind of increase other presidents have seen in other rally-around-the-flag moments. Drew Angerer/Getty Images hide caption 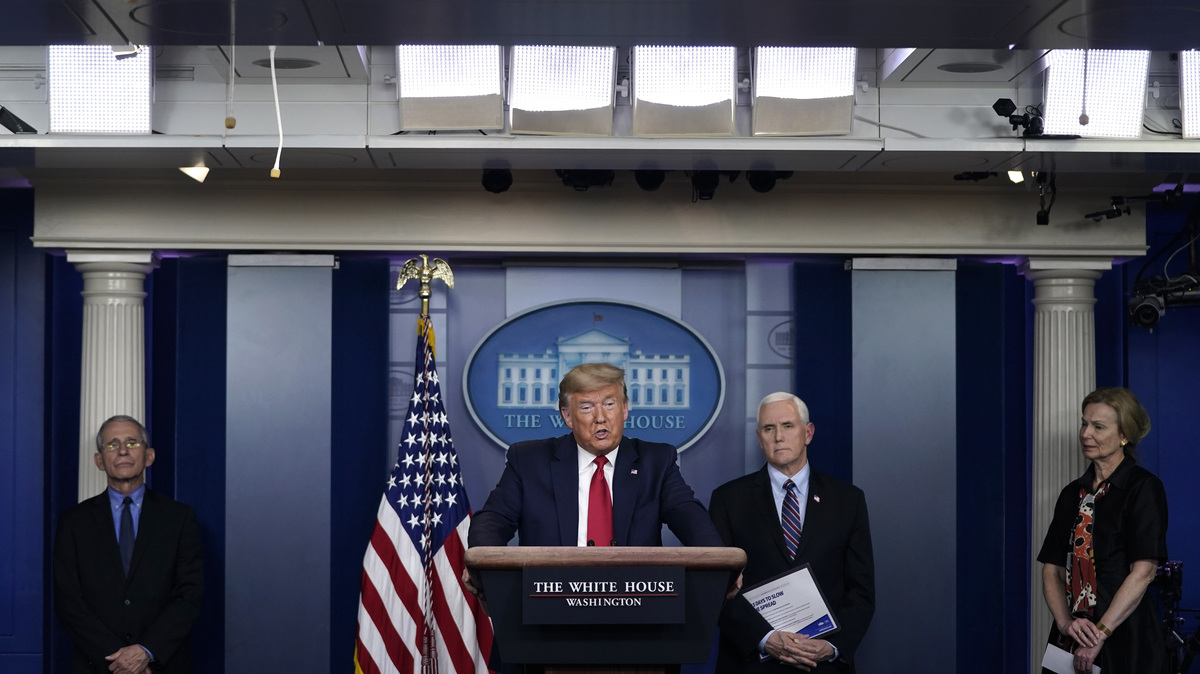 President Trump's approval rating has risen, but it's certainly not the kind of increase other presidents have seen in other rally-around-the-flag moments.

Asked if he has any regrets about the way he's handled the coronavirus crisis so far, President Trump said no — and he cited polling to back him up.

Survey data has been mixed.

Trump has hit his highest approval rating since becoming president – 47%, according to an average of the polls. That's an increase of nearly 3 points over the last two weeks.

On Trump's handling of the pandemic, Gallup found 60% of American adults approve. A Fox News poll out Thursday found it lower, at 51%. Reuters/Ipsos and Economist/YouGov polls similarly had it at 49%.

Those are all increases from two weeks ago, when the NPR/PBS NewsHour/Marist poll found 44% approved of his response to the crisis.

But there are lingering questions about the president's approach. Over the last several weeks, Trump has been inconsistent. He first downplayed the threat of the coronavirus, then appeared to take it much more seriously last week, and then said the White House can't let the "cure" of public health measures be worse than economic harm and suggested "opening up" the country by Easter.

Trump has faced criticism for the United States being slow to test for the virus, and for not using his full authority to distribute needed supplies. The U.S. now has the most confirmed cases in the world, and more than 1,000 Americans have died, according to Johns Hopkins University researchers.

It's possible current polling is a lagging indicator from Trump publicly taking the virus more seriously than he had been previously. Surveys so far largely aren't reflecting Trump's pivot this week to suggesting he wants to reopen the economy within weeks.

Regardless, the 3-point increase in his approval rating so far is not much of a bump, certainly not the kind of increase other presidents have seen in other rally-around-the-flag moments, pollsters say.

"We're seeing although his numbers have inched up, it's still roughly in his zone of support," said Lee Miringoff, director of the Marist College Institute for Public Opinion, which conducts polling for NPR. "Look, he's not getting the rally-around-the-president [effect] that presidents in crisis have gotten."

FACT CHECK: Trump Compares Coronavirus To The Flu, But It Could Be 10 Times Deadlier

"Certainly, there's no bounce — it's very minimal," Miringoff said. "It's all playing out depending on the filter people have. The partisan split is as wide as can be. I don't think it's something that reflects a president who is about to break 50% [approval] for the first time."

Partisanship did not begin in the Trump era.

Its sharp rise appears to have taken hold during the Obama years. That's evident by how little former President Barack Obama's approval fluctuated once his honeymoon period was over and legislation aimed at combating the Great Recession was passed.

According to data from the Gallup Presidential Job Approval Center, George W. Bush after 9/11 and before the Iraq War, George H.W. Bush before the Gulf War, Ronald Reagan during the Grenada military action and the Marine barracks bombing in Lebanon, and Jimmy Carter at the outset of the Iran hostage crisis all saw much bigger rally-around-the flag approval bounces than either Trump (so far) or Obama.

- Obama and the Great Recession 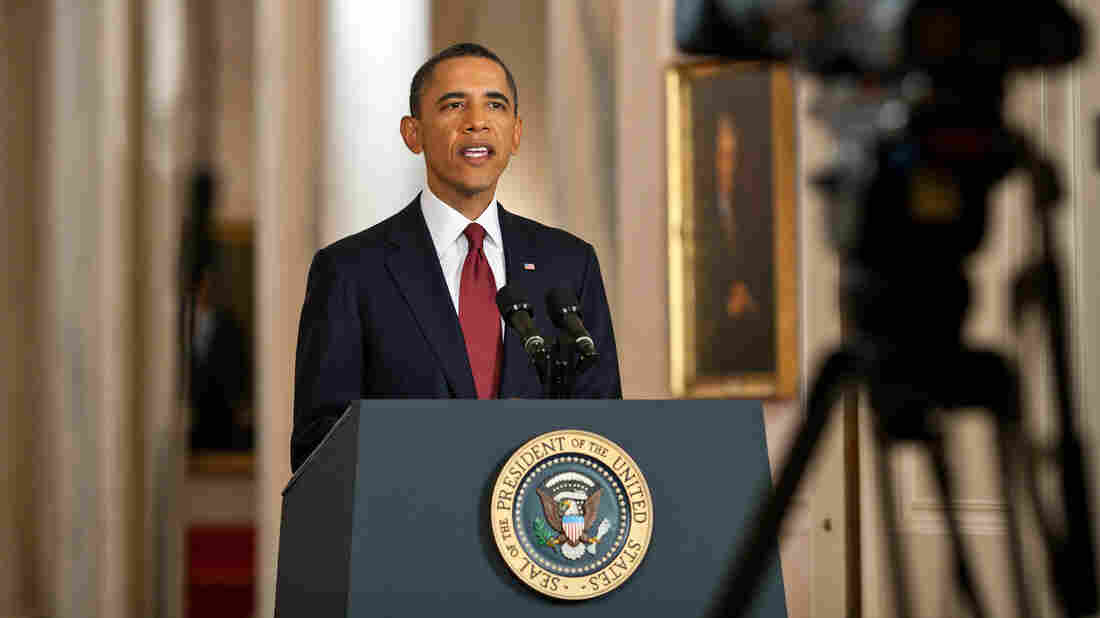 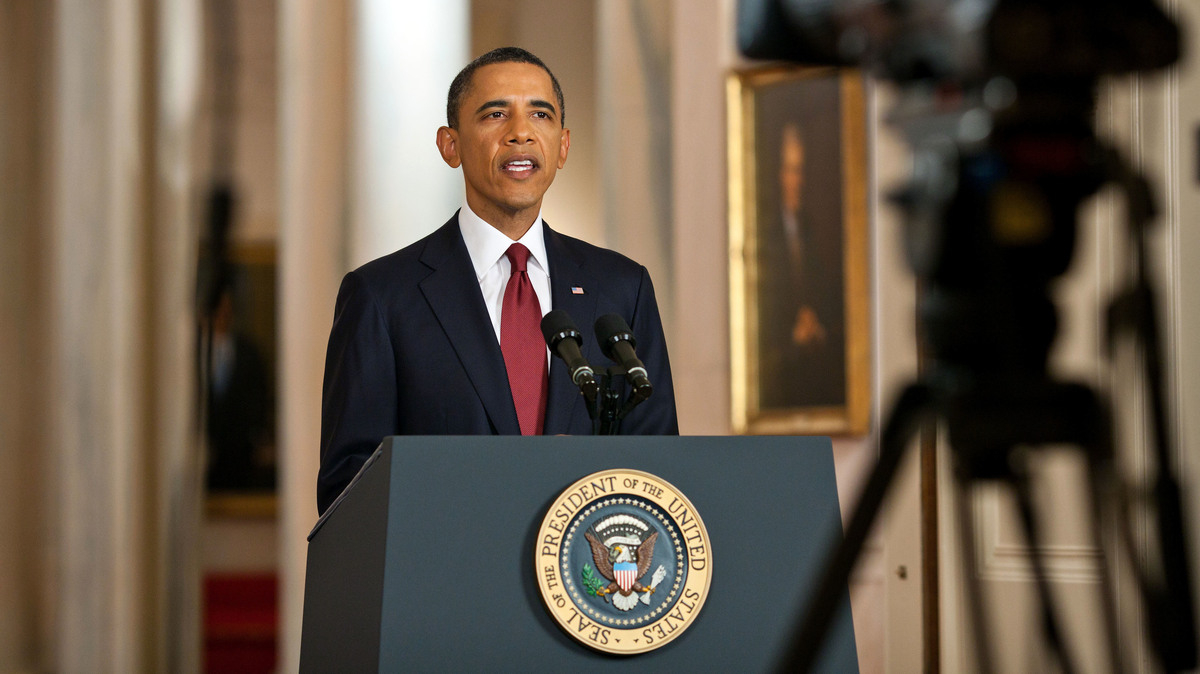 Then-President Barack Obama announces the death of Osama bin Laden on May 1, 2011.

At the beginning of Obama's presidency, the country was largely behind him, and his approval rating, per Gallup, was in the 60s.

That came down with the partisan fight over the health care bill and languished in the 40s until it hit 50% again with an improving economy by January 2011. His biggest bounce — about 8 percentage points — came with the killing of Osama bin Laden.

That didn't last. Apart from his first months in office, Obama's approval rating never went below 40% or higher than 59%, which he hit once — on the eve of leaving office.

By comparison, Trump's range has been even narrower — from 35% to 49% in Gallup's polling. 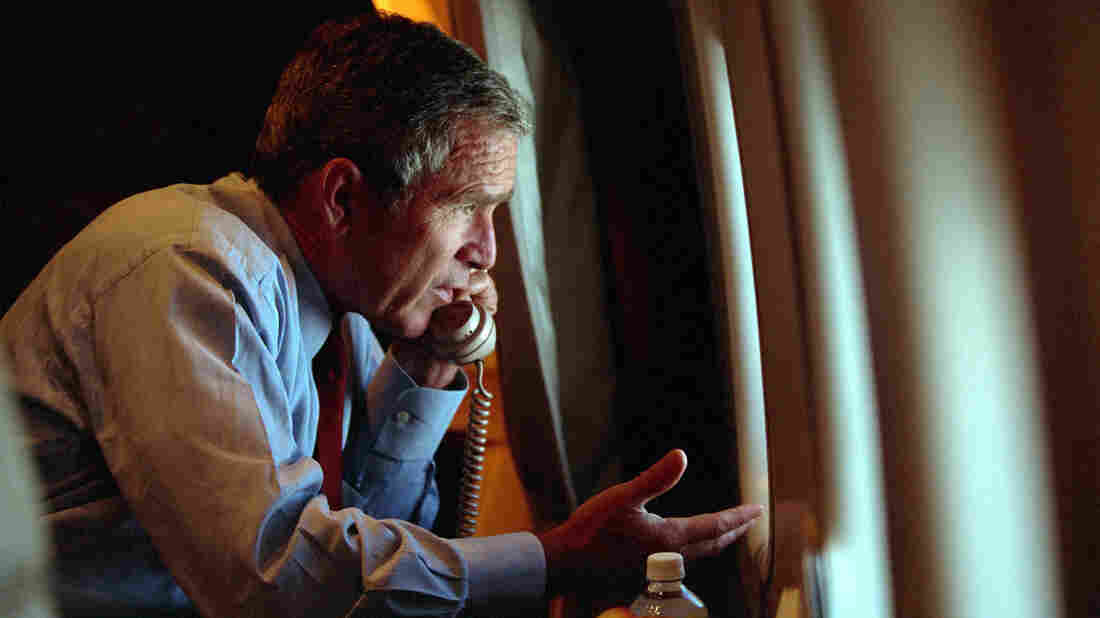 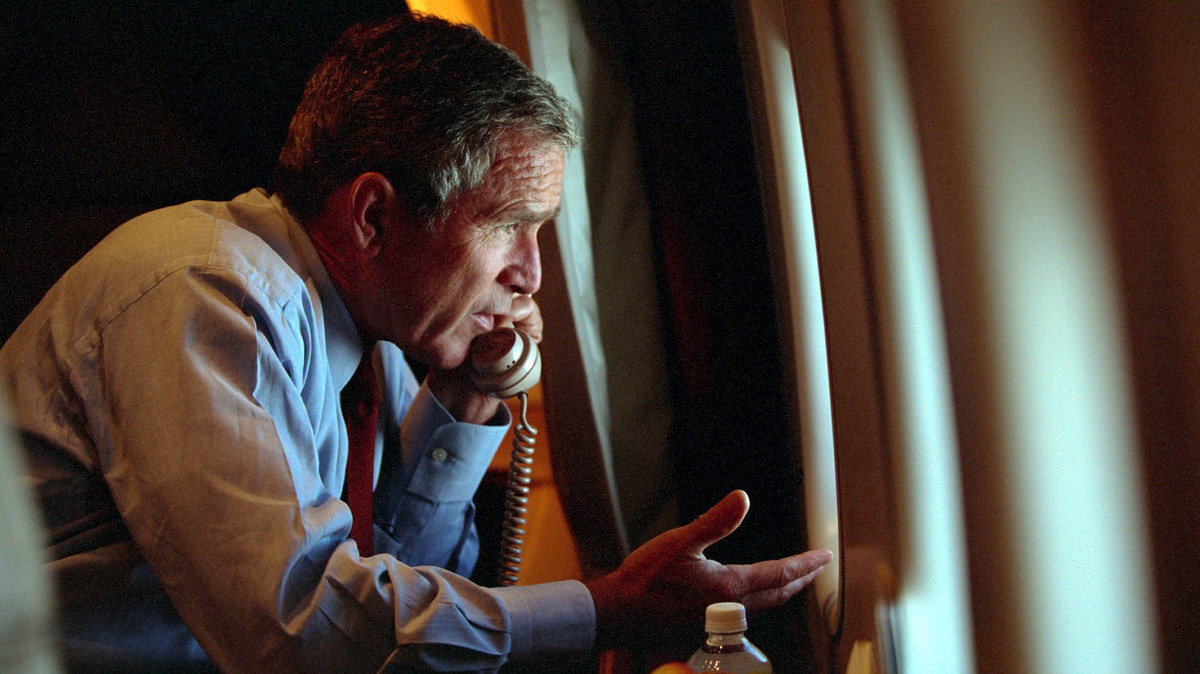 Bush's approval hit an astounding 90% immediately after the Sept. 11 terrorist attacks, jumping 39 points from the day before 9/11.

The Iraq War is remembered as an American foreign policy blunder, but Bush experienced another significant jump on the eve of that war. His approval went up 14 points, from 57% to 71%, in March 2003.

Eventually, his job approval cratered, nosediving to 31%, as Iraq spiraled into civil war in 2006, and then declined again to 25% the month before the 2008 election, as the Great Recession hit.

- Clinton, the Kosovo bombing and his overall popularity

There wasn't much of a bounce for Clinton because of the Kosovo NATO bombings in March 1999. But realize, he was popular already.

According to Gallup, Clinton had a 64% approval rating before the bombing and 64% immediately after it. It fell to 53% months after the bombing, but that was the lowest point in his entire second term — and Clinton had been impeached. 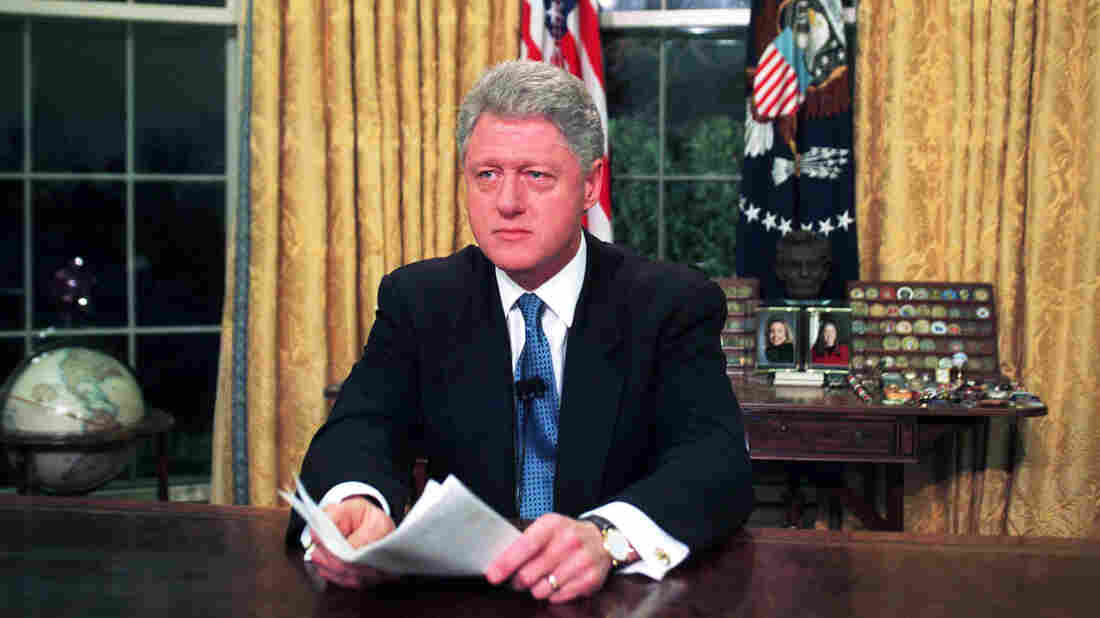 Then-President Bill Clinton is seen in the Oval Office after addressing the nation about the NATO bombing of Serb forces in Kosovo, on March 24, 1999. Pool/Getty Images hide caption

His popularity in office is remarkable considering today's partisanship. Clinton's approval rating peaked at 73% in December 1998, days after he was impeached. He left office with a 66% approval rating.

His approval peaked just before the end of the war at 89% in March 1991. But, as the economy worsened, his approval skidded all the way down to 29% over the next year, leading to Clinton's election.

- The Reagan shooting, the Marine barracks bombing and Grenada

But that event helped his approval rating. He went from 51% when he was sworn in to 68% two months after being shot. (That was tied for the highest of his presidency.)

Reagan saw another bounce in 1983. The economy was improving, but there were rally-around-the-flag moments with the Marine barracks bombing in Lebanon in October, then the U.S. invasion of Grenada the same month.

The invasion lasted through December, and from October to December, Reagan went from 45% to 54% approval, according to Gallup.

Reagan started 1983 with just a 35% approval rating. He started 1984 with a majority approving of the job he was doing. He coasted to reelection that year, winning every single state except Minnesota, along with Washington, D.C.

- Carter and the surprising case of the Iran hostage crisis

The Iran hostage crisis, along with the country's economic problems, are widely believed to have hobbled Carter and led to Reagan's landslide election in 1980.

Initially, the country rallied around Carter during the hostage crisis. In October 1979, Carter's job approval rating stood at a dismal 29%. But November, when the hostages were taken, marked a sharp rise in his rating over the next two months. He jumped to 58% by the end of January 1980.

But the botched attempt to rescue the hostages in April 1980 led to a precipitous slide that put Carter at 31% by June. That's where it stood in November when he lost reelection.