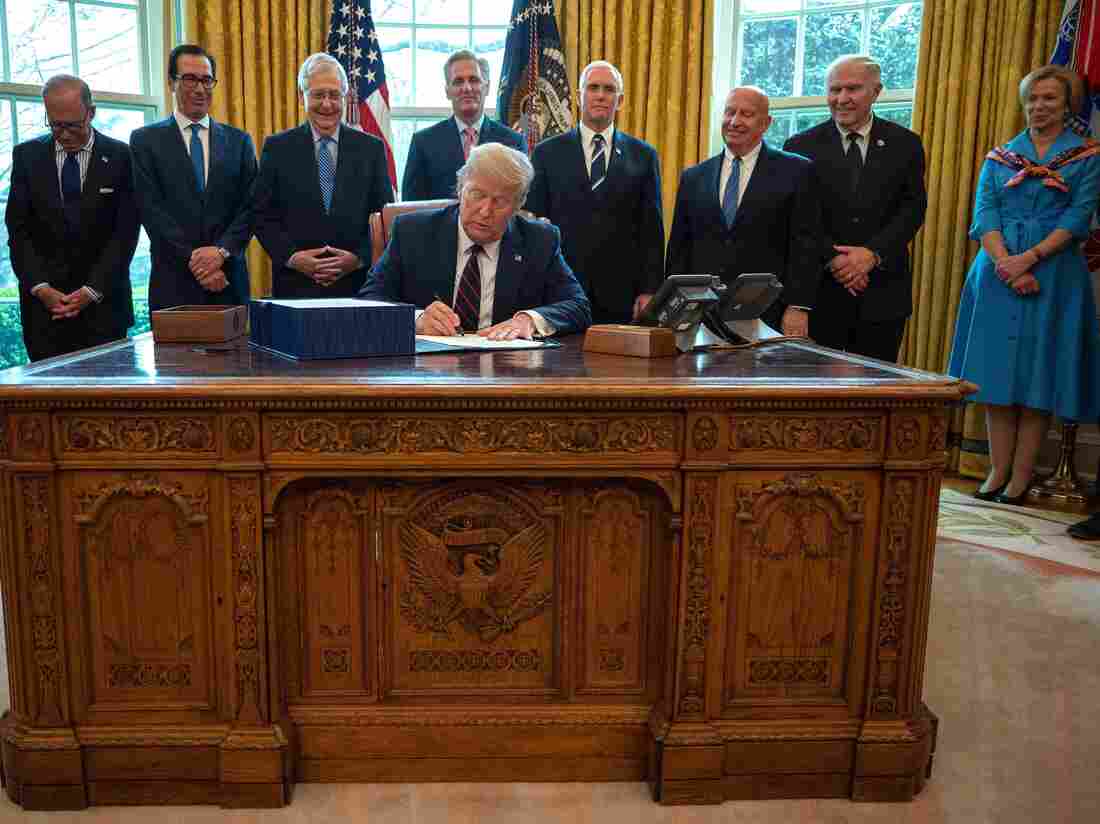 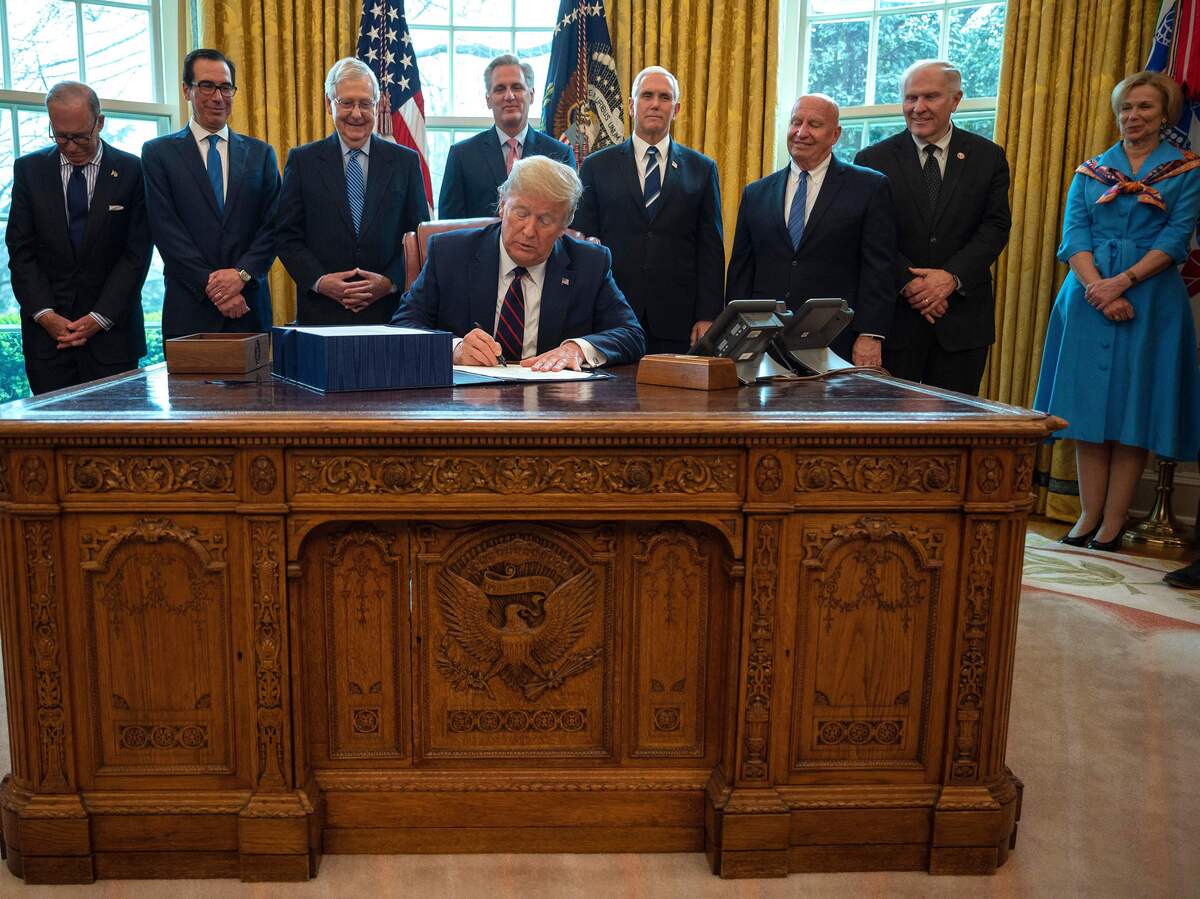 President Trump signs the CARES act, a $2 trillion rescue package to provide economic relief amid the coronavirus outbreak, at the Oval Office of the White House on Friday.

President Trump has signed a historic $2 trillion economic recovery package into law Friday afternoon, shortly after the House of Representatives approved the bill.

In an Oval Office ceremony Friday, the president thanked Republicans and Democrats "for coming together, setting aside their differences and putting America first" to pass the legislation. Trump was joined by Senate Majority Leader Mitch McConnell and House Republican Leader Kevin McCarthy. No Democrats were present at the signing.

Trump went on to tout what he called the "greatest economy in the history of our country" prior to the arrival of the coronavirus.

"We had the highest stock price we've ever seen ... " Trump said. "And then we got hit by the invisible enemy and we got hit hard."

"I really think in a fairly short period of time because of what they've done and what everyone's done, I really think we're going to be stronger than ever and we'll be protected from a lot of this," he said.

The package will offer relief to state and local governments, individuals, small and large businesses, and hospitals affected by the coronavirus crisis.

The bipartisan legislation, known as the CARES Act, is the third aid package from Congress this month to address the growing pandemic.

This relief package includes direct payments to Americans, an aggressive expansion of unemployment insurance and billions in business loans and aid to hospitals.

The legislation passed by voice vote, which allows the House to approve a bill without requiring members to individually cast a vote. The move quashed an effort from Rep. Thomas Massie, R-Ky., to require members to appear in person and each cast an individually recorded vote.

Leaders wanted to avoid a recorded vote because some members were self-quarantining or had concerns about risking exposure to the virus by traveling from their districts. Instead, leaders encouraged those who were at risk to stay home and post statements or videos on their position on the bill.

Massie's Thursday push prompted many members to fly back to Washington, despite social distancing efforts, and threatened to drag on debate.

In addition to contradicting House leadership, Massie's move drew the ire of President Trump, who on Friday slammed the congressman in several tweets, saying he should be kicked out of the Republican Party.

Later, Texas GOP Rep. Chip Roy tweeted that Trump should "back off" and that Massie was doing his constitutional duty in his plans to ask for a quorum.

The House vote comes a day after the U.S. overtook China to lead the world in the number of coronavirus cases; the U.S. had more than 90,000 as of midday Friday, and more than 1,300 have died, according to Johns Hopkins University. 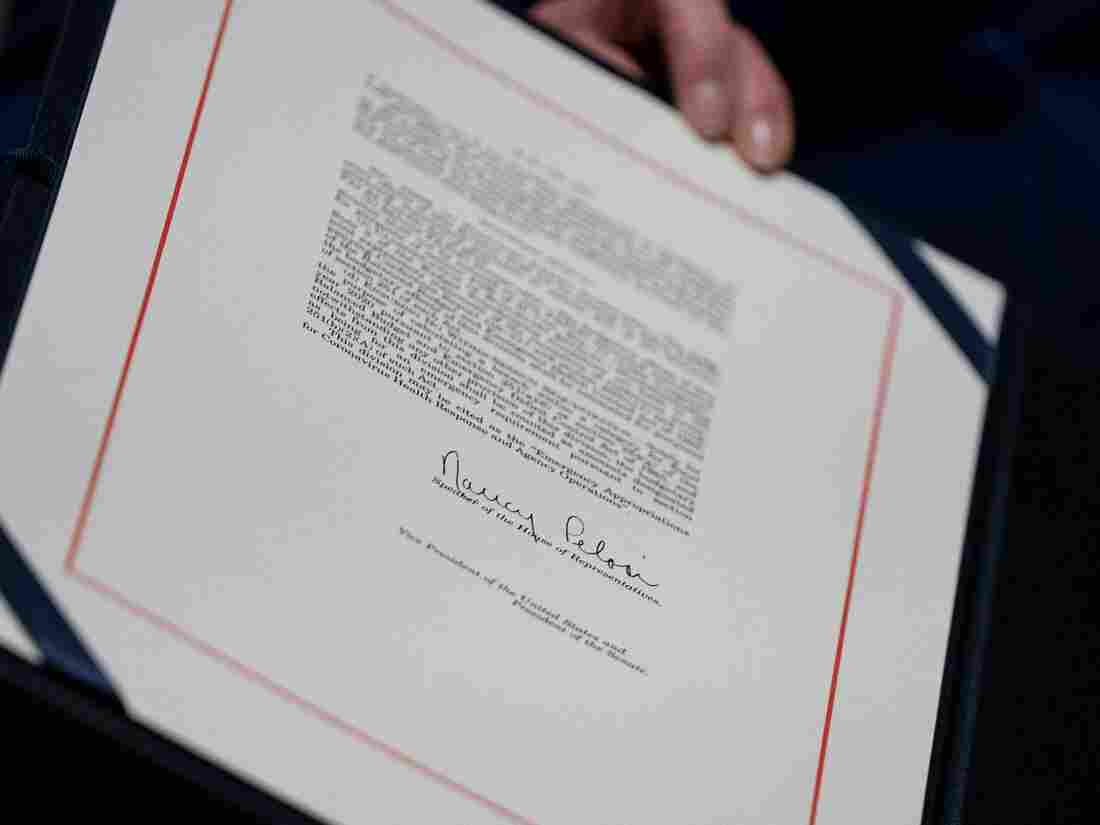 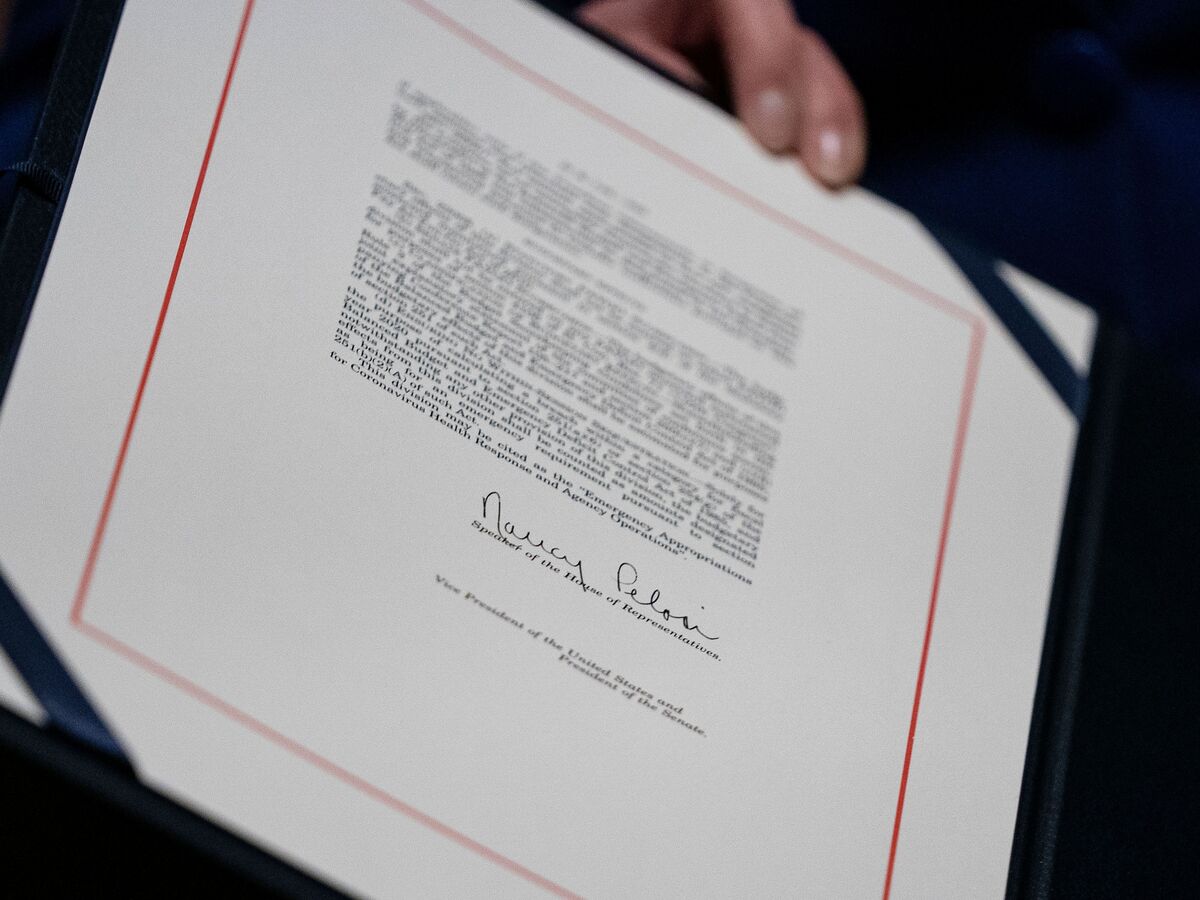 Speaker of the House Nancy Pelosi signed the relief bill earlier Friday after the House passed it.

"This is an emergency, a challenge to the conscience as well as the budget of our country, and every dollar that we spend is an investment in the lives and the livelihood of the American people," House Speaker Nancy Pelosi, D-Calif., told reporters a day earlier on Thursday.

"This is not another day in Congress; this is a time when we have to come together to deliver results," McCarthy, R-Calif., said.

The Senate approved the bill late Wednesday in a vote of 96-0, capping days of tough negotiations. The four senators who were not present for the vote were all self-quarantining in connection with coronavirus concerns or other illness.

Social distancing in the House

In the House, four members have tested positive for the illness and more than a dozen others remain in quarantine.

As a result, House lawmakers had hoped to approve the measure on Friday with a smaller share of its more than 430 members and by a quick voice vote — a tall order for the chamber.

Massie's plans to call for a recorded vote would have prevented that.

Already, the House is operating under new social distancing requirements. Members were asked to use hand sanitizer and enter separately through different doors.

"The floor will look different," McCarthy said. "Those who are managing the bill will be further away. Members can't sit next to each other."

And for the first time, C-SPAN reserved airtime to post videos from lawmakers sharing support or opposition to the bill. The move came following a request from House Majority Leader Steny Hoyer, D-Md.

What's in the bill

The bill marks the largest rescue package in American history and a major bipartisan victory for Congress. In the recent days, it was the result of arduous negotiations between Senate Minority Leader Chuck Schumer and Treasury Secretary Steven Mnuchin.

Trump had previously urged quick House approval for the plan and, on Thursday, congratulated the Senate for its efforts.

"I'm profoundly grateful that both parties came together to provide relief for American workers and families in this hour of need," Trump told reporters Thursday evening.

Among the key provisions in the bill:

Now that the House has approved the measure, it will join the Senate in an extended recess as a result of the pandemic. But some lawmakers say their work is not done, and they'll now weigh the potential for a fourth rescue bill.

Democrats have been clear that new legislation is needed, but Republicans have been less committal.

"This was a big, strong step, but we need more," Pelosi said Thursday, later adding, "There are so many things we didn't get in any of these bills yet in the way that we need to."

Pelosi said the next phase should involve negotiations among the "four corners," that is herself, McCarthy, Schumer and McConnell.

She said the House could take the lead, and the next wave of legislation should focus on worker protections, medical leave, pensions, food security and additional funding for state and local governments. For example, Washington, D.C., was not treated as a state in the latest coronavirus relief bill and will lose millions as a result.

However, McCarthy and other Republicans say they want to wait.

"I wouldn't be so quick to say you have to write something else," McCarthy said. "Let's let this bill work, just as long as we let the other two bills work as well. Whatever decision we have to make going forward, let's do it with knowledge, let's do with experience of what's on the ground at that moment in time."