Accessibility links
Immigration System Slowdown Keeps Some Doctors From Coronavirus Front Lines Coronavirus is disrupting the immigration system at nearly every level, as visa processing and other services slow at federal agencies. This affects immigrant doctors who have temporary work visas. 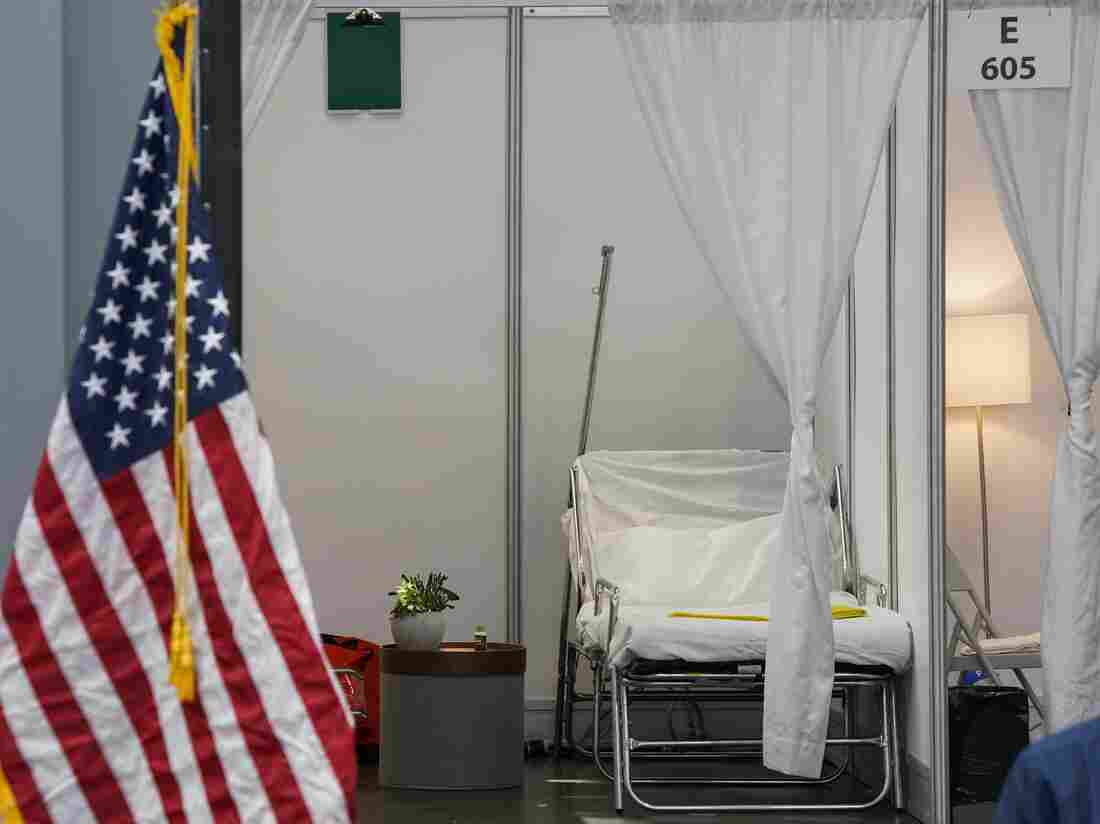 An improvised hospital room at the Jacob K. Javits Convention Center, which is being turned into a hospital to help fight coronavirus cases in New York City. Eduardo Munoz Alvarez/Getty Images hide caption 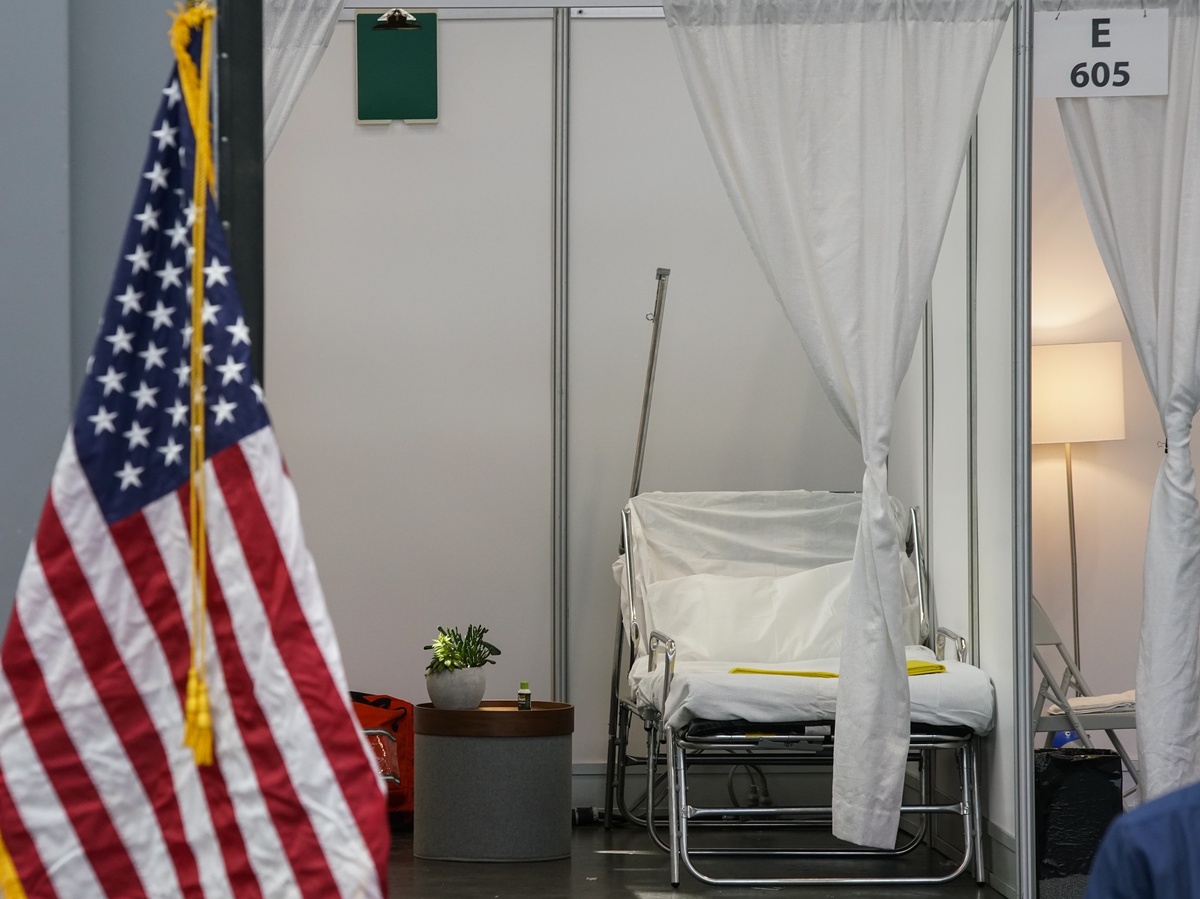 An improvised hospital room at the Jacob K. Javits Convention Center, which is being turned into a hospital to help fight coronavirus cases in New York City.

From the hospital where he works in South Carolina, Dr. Kiran Nagarajan has been watching the coronavirus crisis explode in other parts of the country. But, like many other immigrant doctors, he can't do anything about it.

"There's a dire need of physicians especially in places like New York, New Jersey," Nagarajan said. "I wish I can go and help there."

For Immigrant Communities, Coronavirus Is A Different Kind Of Threat

Dr. Nagarajan is here on a temporary visa — one that only allows him to work at the hospital in South Carolina that hired him. He often travels to New Jersey, where his wife works. Near the epicenter of the coronavirus outbreak.

"I'm literally doing nothing there," he said. "But I can't work."

One in four doctors in the U.S. is an immigrant. Thousands of them arrive every year to train in the U.S., and stay to work on temporary visas. Many of them, like Nagarajan, want to be on the front lines of the coronavirus outbreak.

But they can't easily transfer their visas to practice in another hospital because U.S. Citizenship and Immigration Services has closed offices to the public and cut back on services.

Coronavirus is disrupting the immigration system at nearly every level. Green card and citizenship interviews are also suspended. Some immigration courts have closed, but others are still open — over the objections of immigration judges and lawyers.

And it's not just legal immigrants who are affected. Immigrants in the country illegally are afraid of being deported if they come forward to get tested and treated for coronavirus.

"We're dealing with those kinds of issues day in, day out, of how you actually continue on when necessary functions in the immigration system are not happening," said Greg Siskind, founding partner of the immigration law firm Siskind Susser PC in Tennessee.

Siskind said the USCIS work slowdown means longer processing times for work visas, and State Department actions in response to coronavirus are also having an impact.

A huge problem is looming this summer, Siskind said, when 4,000 international doctors are supposed to begin their residencies at U.S. hospitals. But U.S. embassies and consulates worldwide have suspended routine visa processing, so those doctors may not get their visas in time.

"We're hearing now from teaching hospitals that we represent that are in panic mode," he said.

As for undocumented immigrants, President Trump was asked earlier this week if they could show up at testing sites without fear. Trump said yes, they can. "And if that's not the policy, I'll make it the policy," he said.

But his administration has been sending mixed signals. Immigration and Customs Enforcement said it is suspending most arrests, and focusing only on criminals. Then a top Homeland Security official, Ken Cuccinelli, emphasized that deportations would continue.

"You can imagine the confusion and terror that's rippling through the immigrant community at this point," said Doug Rand, a former Obama administration official and co-founder of the law firm Boundless Immigration.

Some legal immigrants fear they could become targets of ICE enforcement if their visas expire while immigration offices are closed.

Rana Akkawi is an immigrant from Lebanon who's teaching at a school in Memphis. She was supposed to get married this weekend to her boyfriend, a U.S. citizen.

"We had to cancel the wedding. We didn't want to put anyone's life at risk," Akkawi said. "I am not regretting it. But at the same time I'm faced with this reality — what am I going to do?"

Akkawi's visa expires at the end of the school year, so she planned to apply for a green card. But to get it, Akkawi still has to get married. Now she's scrambling to find someone who can perform the wedding, and she's finding she can't afford to be picky if she wants to stay here with her husband.

"My boyfriend and I are both born into Christian families. ... We don't practice religion. But I might have a rabbi marry me right now," she said with a laugh.