Accessibility links
Relief Package A Good Start, Say Advocates For The Poor. But More Help Is Needed. The coronavirus relief package includes a number of provisions to help low-income Americans. But advocates for the poor say it's only a first step.

Relief Package A Good Start, Say Advocates For The Poor. But More Help Is Needed.

Relief Package A Good Start, Say Advocates For The Poor. But More Help Is Needed. 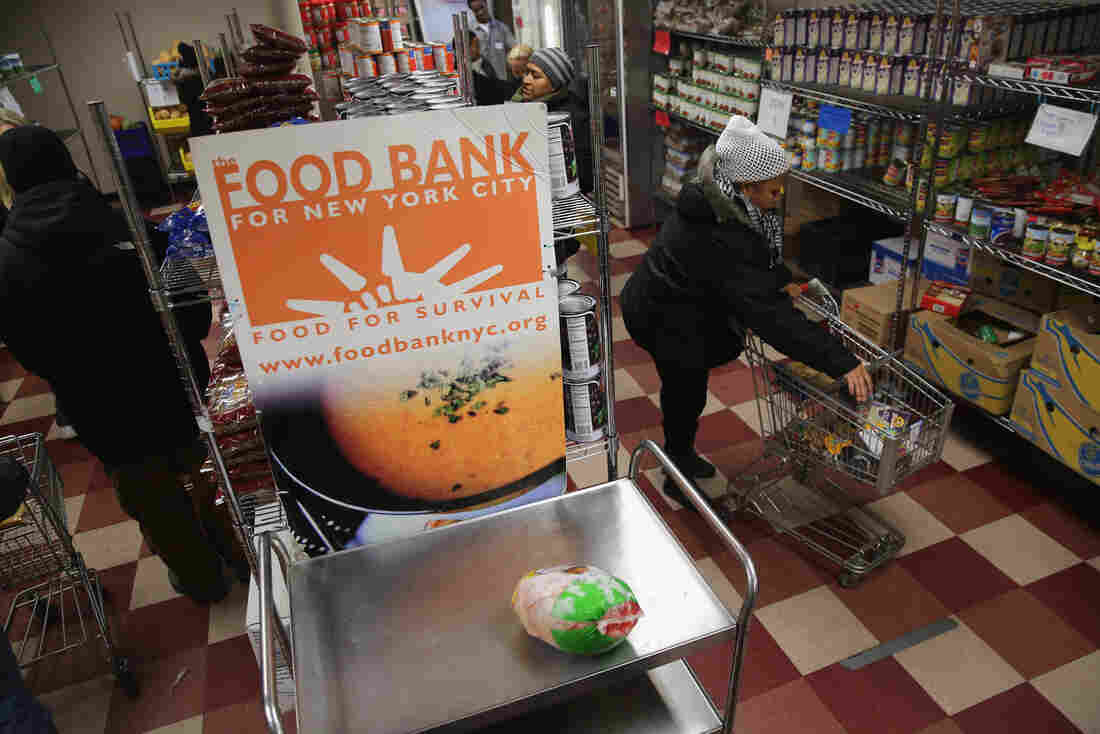 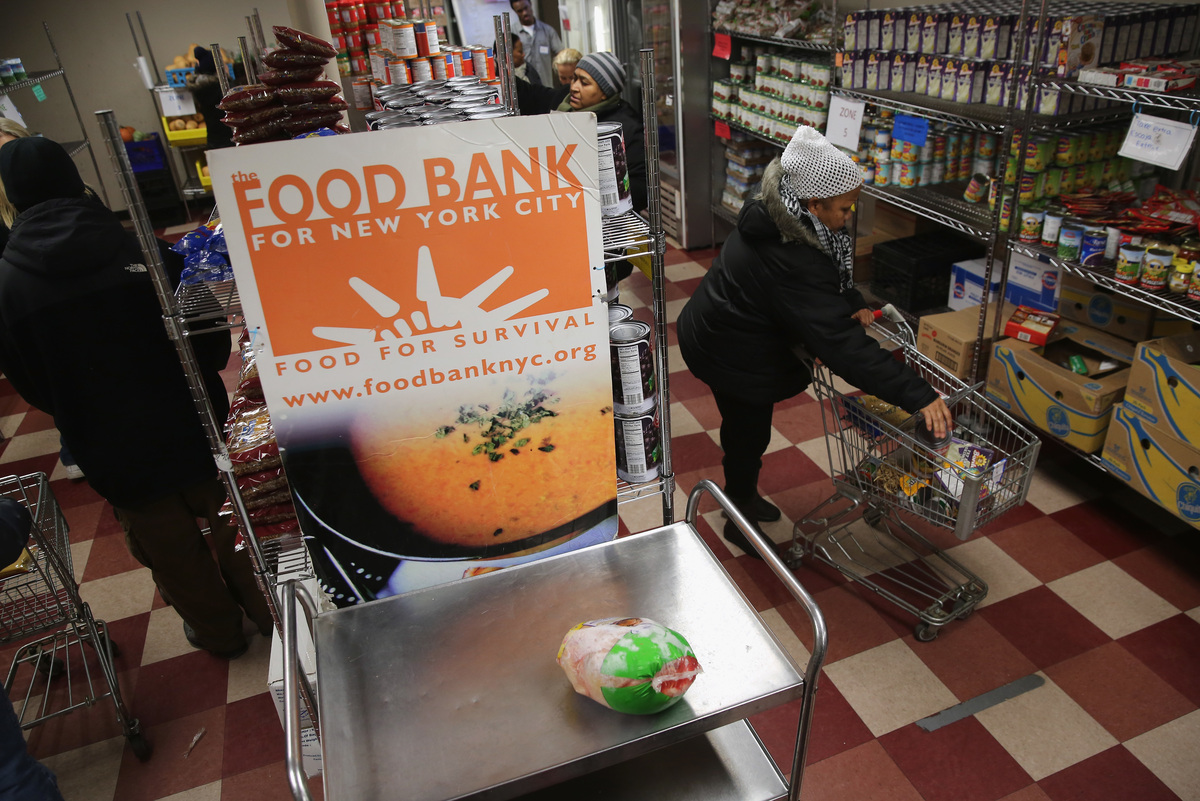 The legislation includes $450 million to boost inventories at the nation's food banks, which are already hurting from increased demand.

But advocates for the poor say it's only a first step and that those at the lower end of the economic scale will need much more help in the months ahead.

"The bills that Congress has passed so far are going to help millions of low-income people, but there are missed opportunities to make sure that the help really reaches those who need it the most," said Deborah Weinstein, executive director of the Coalition on Human Needs, an alliance of hundreds of groups that advocate for low-income families. "We can't kid ourselves, we're headed into a depression it looks like, so we're going to have to do more."

One of the biggest disappointments for these groups is that more money was not provided for Supplemental Nutrition Assistance Program, or SNAP benefits, also known as food stamps. The program has traditionally been one of the main tools the government has used to both help struggling families and boost the economy in hard times, largely because it gives people money that they need to spend quickly.

The bill does provide $15 billion in additional SNAP funding in anticipation of more people qualifying for the program, but it does not increase monthly benefits, as food aid groups had sought. They wanted the minimum SNAP benefit to be raised from $15 to $30 a month and the maximum benefit to be increased by 15 percent.

"We know that policymakers have had a lot on their hands but so do hungry people," said Ellen Vollinger, legal director of the Food Research and Action Center, an advocacy group. "So hopefully for all of the people out there, those who need more help purchasing food and those who want to see the economy bolstered, that action will come" in future aid packages.

Still, the current bill includes other assistance for low-income families struggling with the effects of the pandemic. Besides greatly expanding Unemployment Insurance benefits, the package provides a one-time payment of $1,200 — plus $500 per child — for individuals earning $75,000 or less, and married couples earning $150,000 or less.

Chuck Marr, director of federal tax policy for the left-leaning Center on Budget and Policy Priorities, called the payments a "major step forward" from past stimulus packages, which based the size of such checks on an individual's income, which meant that wealthier families got more.

"That did not happen this time. There is bipartisan consensus that the poorest people in the country will receive the same checks as middle class people," Marr said. "So that's a major step forward."

But he added that there is one problem. The payments will be automatically sent to people using information from their most recent tax returns. Millions of low-income American do not file tax returns because they earn too little or their income comes directly from benefit programs, such as Social Security. The bill does allow the Internal Revenue Service to work with the Social Security Administration to identify those who survive on retirement, disability and other benefits, but that still leaves millions of people who will need to file tax returns quickly so they can get their emergency payment.

"They're at high risk of falling through the cracks," said Marr. "This payment is $1,200. This is real money for someone making eight thousand bucks a year."

Low-income families will likely benefit from other relief provided in the package. The bill calls for $12 billion in new housing assistance. This includes $4 billion in emergency homelessness aid and $5 billion in Community Development Block Grants, which can be used to provide shelter and emergency rental assistance to those who need it most. More than $2 billion will be provided in additional housing vouchers for low-income renters.

The bill also calls for a temporary moratorium on evictions and foreclosures — for both renters and owners — on property with federally backed mortgages. During the Great Recession, widespread foreclosures and evictions pushed many families into poverty and homelessness.

Nan Roman, head of the National Alliance to End Homelessness, said she was "very pleased" with the extra assistance for the more than half million people in the U.S. who are already homeless, and to help prevent more from joining their ranks. Still, she noted that the funding is far short of the $11 billion her group estimates will be needed to address an expanding homelessness crisis.

A new report circulated by the alliance warns that people who are homeless are more vulnerable to coronavirus, will require more intensive medical care and are two to three times more likely than others to die of the disease.

"Obviously, there's more that's going to need to be done. There's going to be a lot of people who are precariously housed and we have a lot of unsheltered people in the country and we really need to get them in," said Roman.

Other items in the legislation that could help those facing the most economic stress:

-- The Emergency Food Assistance Program will receive an additional $450 million to boost inventories at the nation's food banks, which are already hurting from increased demand.

-- Charitable deductions of up to $300 will now be allowed for those who don't itemize their taxes. Those individuals tend to have lower incomes.

An earlier version of this story said that the National Alliance to End Homelessness issued a report on the impact of coronavirus on the U.S. homeless population. The report was circulated by the group, but written by academics from the University of Pennsylvania, the University of California Los Angeles and Boston University.