Accessibility links
Are Gun Stores 'Essential' During Coronavirus Outbreak? Depends Where You Live Governors and mayors in some parts of the country are requiring them to close like many other businesses. Other officials are letting gun sales continue. Gun rights groups are on the defensive. 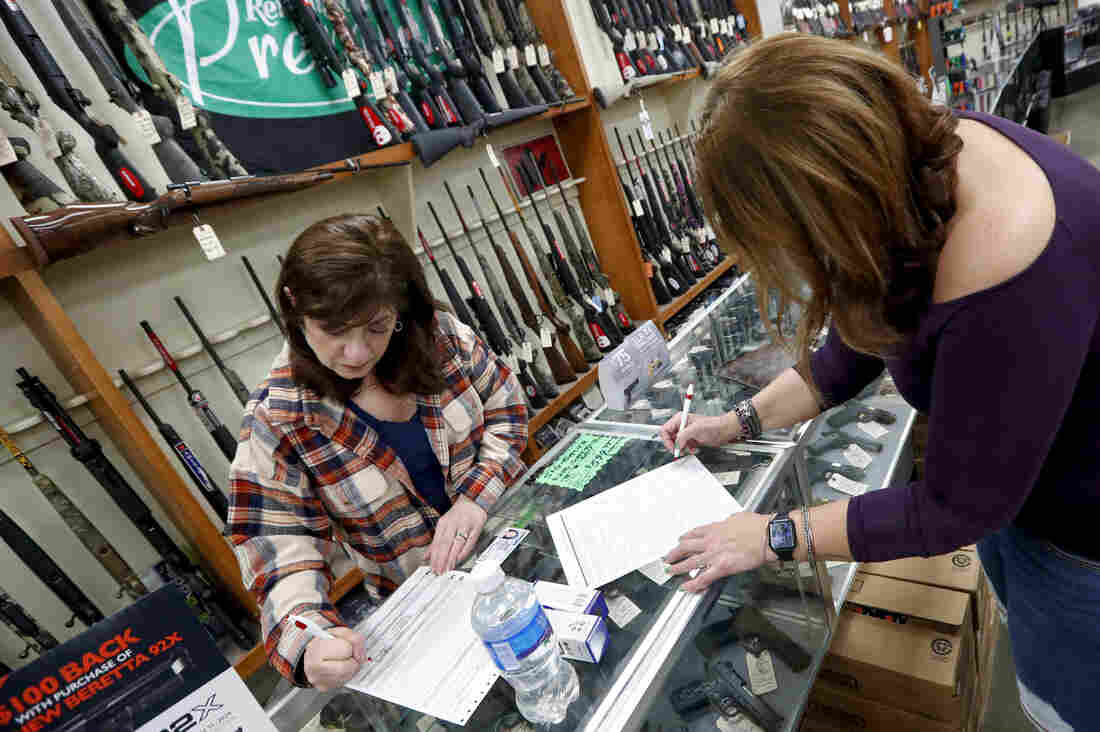 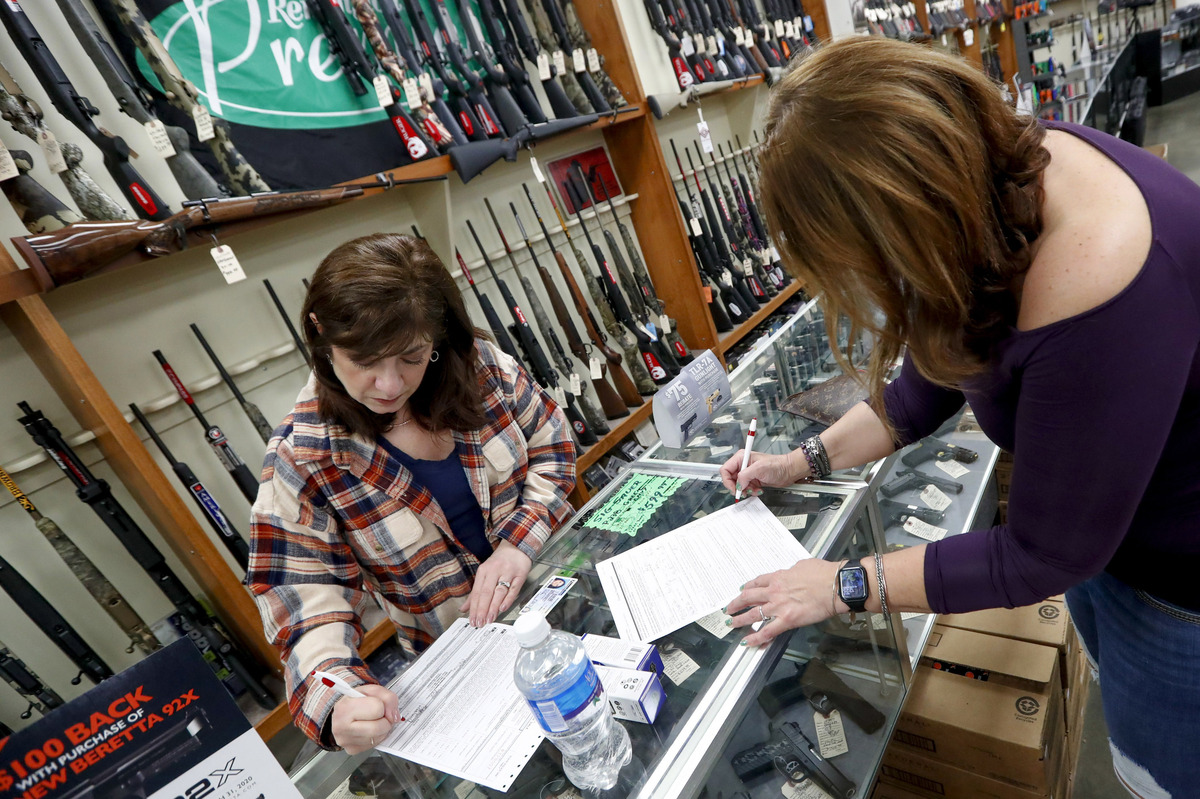 Andrea Schry (right) fills out the buyer's part of legal forms to buy a handgun as shop worker Missy Morosky fills out the vendor's parts after Dukes Sport Shop in New Castle, Pa., reopened on Wednesday.

More than 200 million people in about half of the states are under orders to stay indoors to slow the transmission of the coronavirus.

Under those decrees, businesses have closed unless deemed "essential," which has sparked a nationwide debate among state and local leaders: Should gun stores be considered essential?

"A lot of people may find themselves in situations where they may need to be their own first responders," said Michael Cargill, who runs Central Texas Gun Works in Austin.

Gun owners, he said, "want to protect their family in case things go the other way."

John Feinblatt, president of Everytown for Gun Safety, which advocates for gun control measures, said labeling gun retailers as "essential" in the midst of a global pandemic is not in the public's best interest.

"Guns will not make Americans safer in the face of COVID-19," Feinblatt said. "Gun stores do not deserve special treatment. In fact, a surge in gun sales will put many communities at greater risk if guns aren't stored securely and if background checks aren't completed."

Increasing concerns for gun control advocates are reports of people using firearms out of fear created by the coronavirus crisis. In Alpharetta, Ga., for instance, a man was arrested for allegedly pulling out a gun on two women wearing medical masks at a post office because he worried they had the coronavirus.

Gun and ammo sales have rocketed since the outbreak surfaced. And some of the panic driving the purchases is also present because of what gun rights advocates see as preserving their constitutional right to bear arms. They argue short-term emergency restrictions on gun sales could erode their enshrined rights.

"Just because we're in a pandemic, American rights do not go away," Mark Oliva, a spokesman for the National Shooting Sports Foundation, told NPR. "There are disparate interpretations on how people want to view these orders, but the Second Amendment is unequivocal." 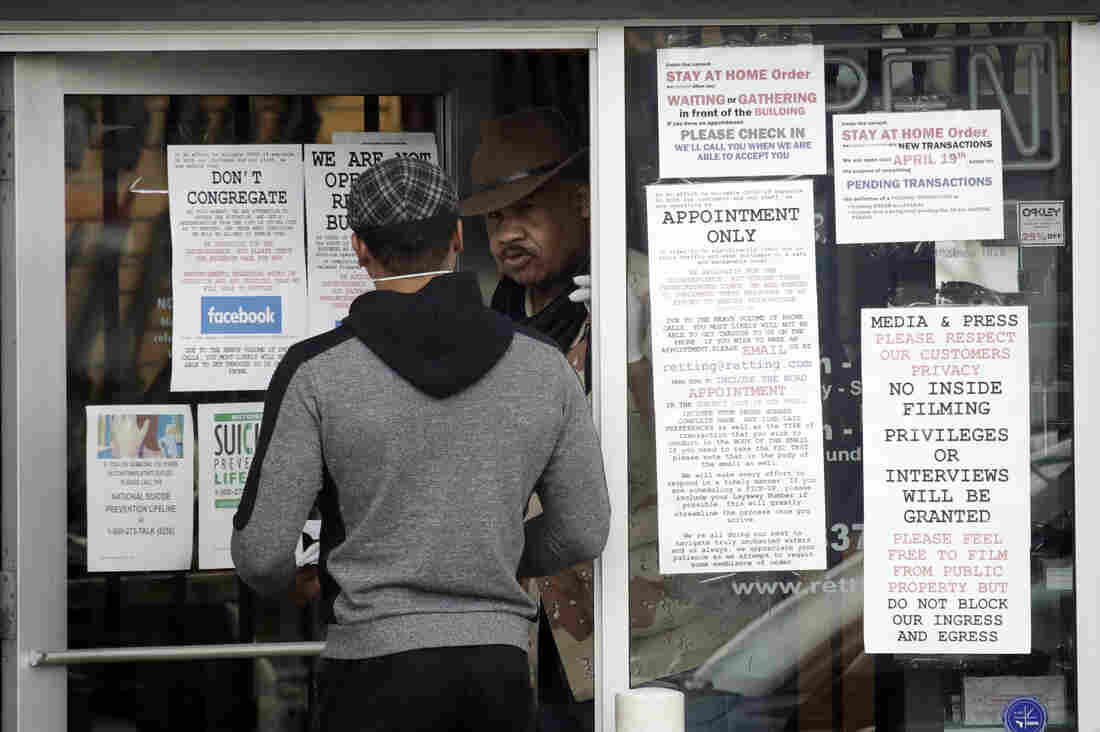 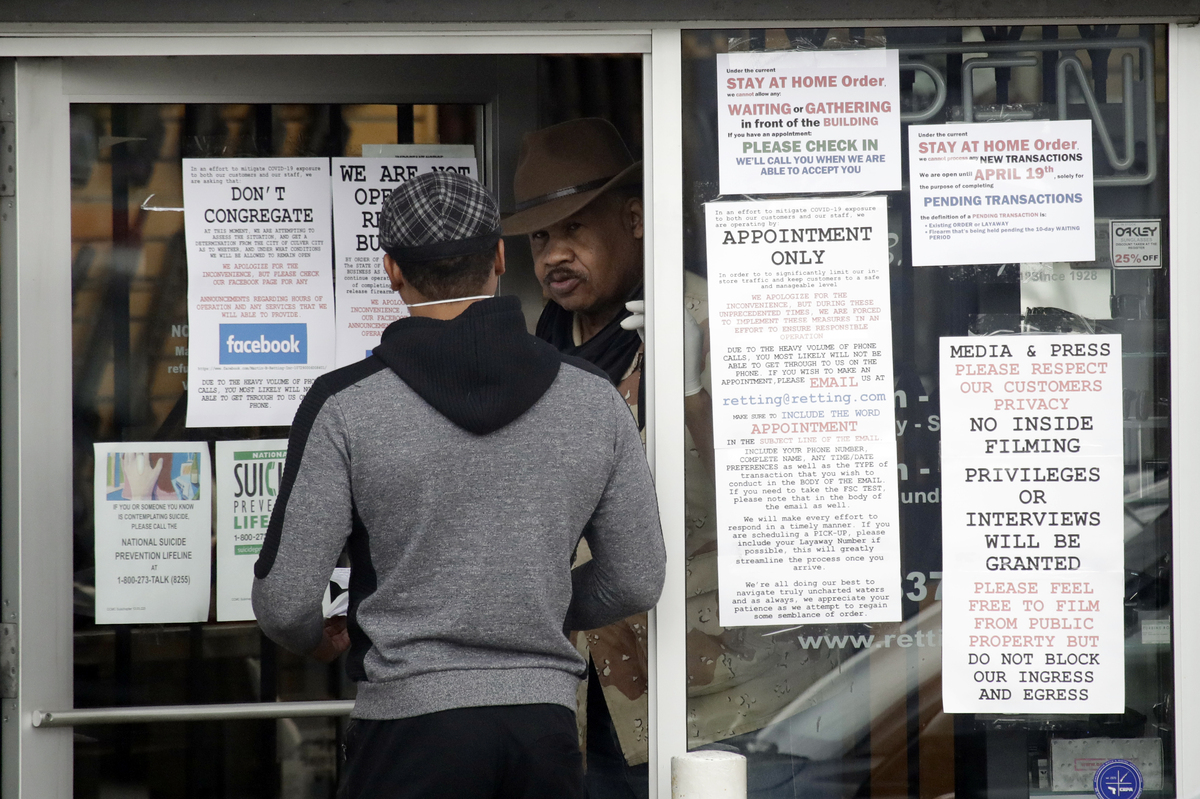 An employee answers questions at the entrance to a gun shop Tuesday in Culver City, Calif.

Indeed, whether or not gun shops are essential amid a global health crisis appears to be creating a patchwork of differing rules and guidelines state by state and stoking anew the tussle between gun advocates and gun control groups.

A patchwork of orders over whether gun shops are 'essential'

In Pennsylvania, Gov. Tom Wolf allowed gun shops to open with new social distancing rules at the urging of some justices on the state's high court.

The Los Angeles County sheriff has twice ordered gun shops to close. His initial decision was followed by an outcry and an opinion from the county's top lawyers that gun retailers could keep their doors open during the pandemic. Asked who was right, Gov. Gavin Newsom said it was up to local sheriffs.

Texas Attorney General Ken Paxton said Friday that purchasing and possession of firearms during the pandemic is indeed essential.

Washington state is shuttering gun shops by not listing firearm retailers on its list of essential operations.

In New Orleans, the mayor issued an emergency proclamation that allows for the suspension of "alcoholic beverages, firearms and explosives" if deemed necessary.

Meanwhile, in other parts of the country, the question awaits the outcome of legal battles.

Lawyers with the New Jersey Second Amendment Society filed a federal lawsuit this week against the state's governor for not classifying gun retailers as essential.

Mark Olivia with the National Shooting Sports Foundation said his group has been in talks with the Trump administration to make sure firearm manufactures do not experience a disruption during the pandemic.

He said Department of Homeland Security officials have told him gun-makers will be added to a list of "critical infrastructure" sectors that will keep businesses open during the crisis.

"The majority of law enforcement departments rely on their local retailers to supply them with the firearms and ammunition that they need," Olivia said. "So it comes down to the public safety missions police departments have right now. Those missions are not ending. In fact, it's more critical than ever during the pandemic."

FBI data has shown a surge in background checks for gun purchases since the beginning of the year, a trend experts say is, in part, attributed to 2020 being a presidential election year prompting concerns about the possibility of new gun restrictions ahead.