Accessibility links
Fires Where They Are 'Not Supposed To Happen' In Australia's Ancient Rainforest Australia's unprecedented fire season scorched sections of rare, ancient rainforests. It's another signal that climate change is intensifying and expanding wildfires globally. 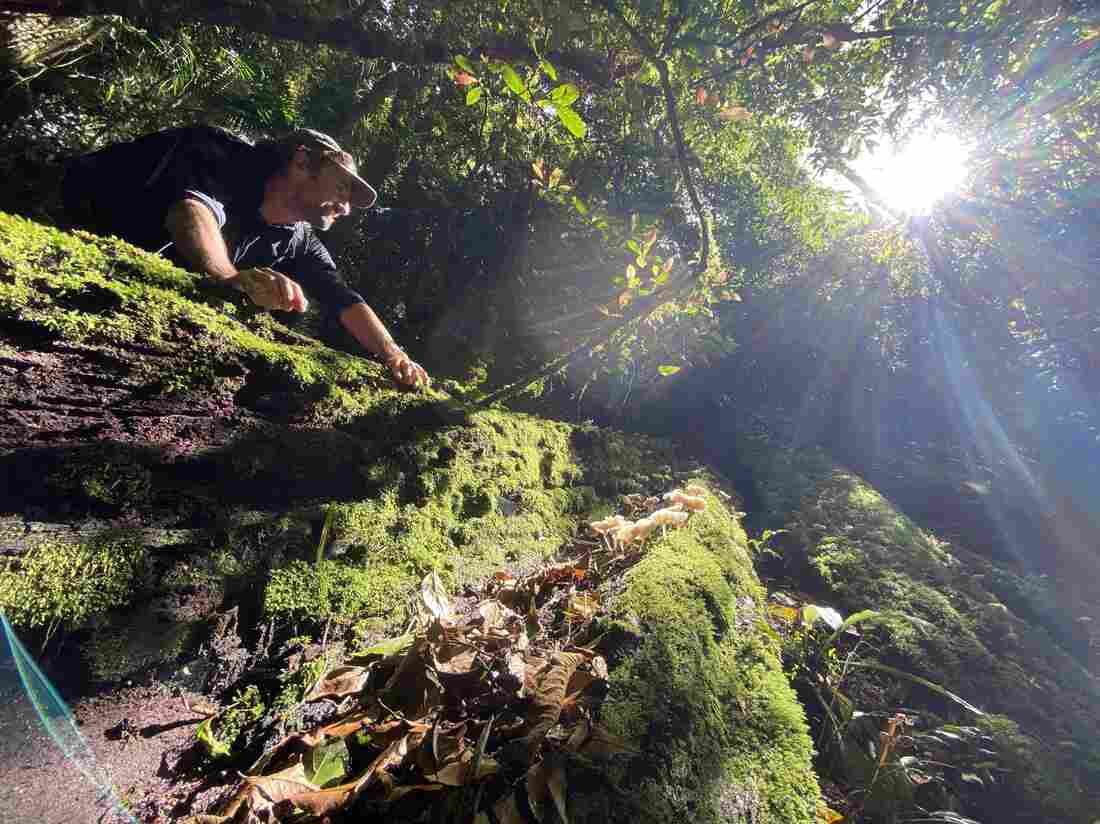 Even some of the darkest, wettest parts of the Australian landscape burned during the country's fire season. The incursion of fire into these damp refuges alarms ecologists like Mark Graham. Nathan Rott/NPR hide caption 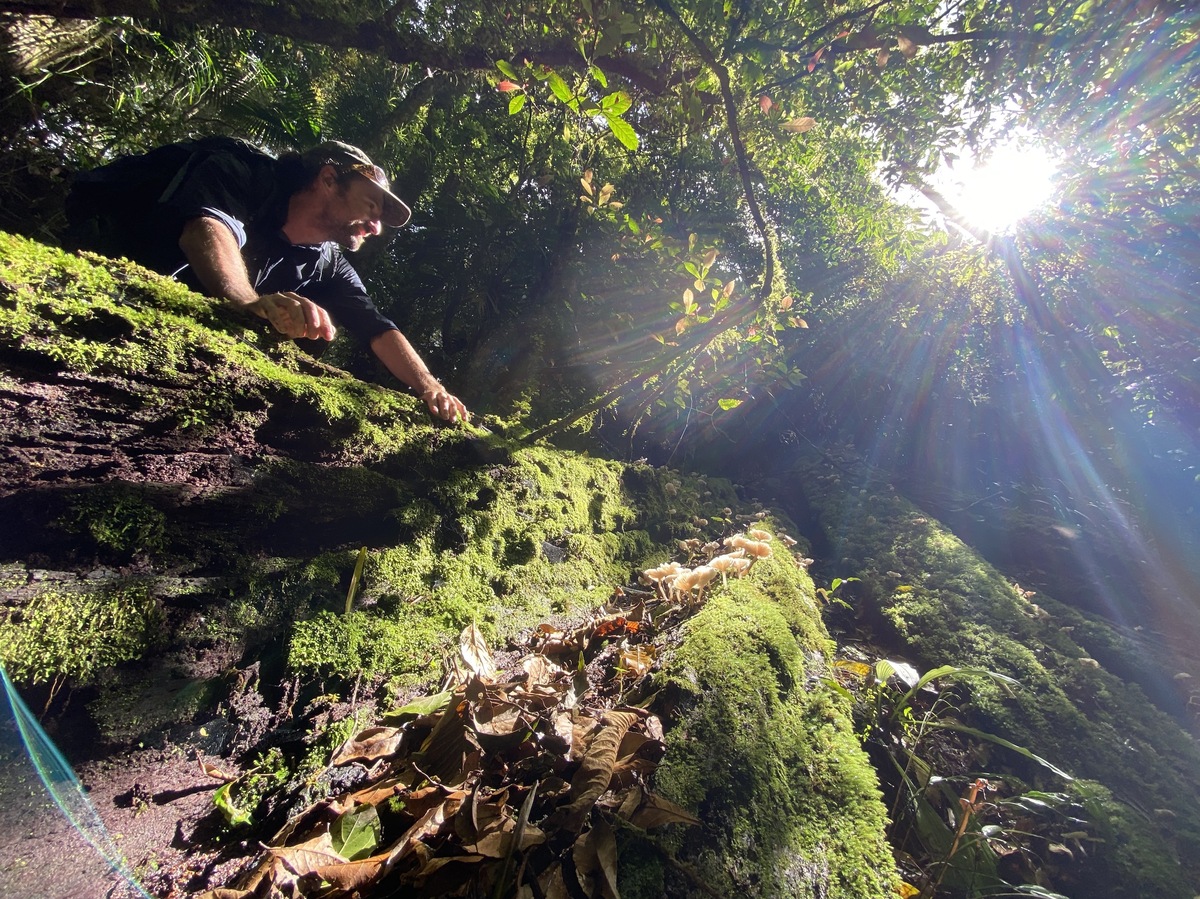 Even some of the darkest, wettest parts of the Australian landscape burned during the country's fire season. The incursion of fire into these damp refuges alarms ecologists like Mark Graham.

Nestled in the mountains of eastern Australia are fragments of an ancient world. Damp, dark and lush, they are some of the oldest ecosystems on Earth: temperate rainforests that have persisted since the days of supercontinents and dinosaurs.

The Gondwana Rainforests of Australia — and the hundreds of rare species that call them home — are the ultimate survivors, clinging to wet, wild patches of a continent that's increasingly developed and dry.

But even these forests could not escape the country's unprecedented fire season unscathed.

Standing barefoot in a shallow stream in Australia's New England National Park, ecologist Mark Graham reaches down and grabs a charred piece of wood that's washed up on a rocky bank. Rain falls from a blue sky through a gap in the dense canopy overhead.

"These are the deepest, wettest parts of the whole landscape, pure rainforest," he says. "To see them burning... it was like this dissolution of the biosphere. It was like, 'this is not supposed to happen.'"

Upstream, one side of the rainforest is as it should be: a dense, tangle of green ferns, shrubs and trees. The other is brown and black, an understory scorched.

Left: An unharmed patch of rainforest in Australia's New England National Park. Right: Another section of the rainforest that burned during Australia's unprecedented wildfires.

For Graham, who trains people about wildfire for the Nature Conservation Council, an Australian environmental group, it's a signal of how much things have changed. Fires are burning with greater intensity and more frequently in places that are used to it, and expanding into places that are not. Australia's rainforests are just the most recent, sobering example.

More than half of the Gondwana rainforests, a World Heritage site, burned during the 2019-2020 fire season.

"These are consistent patterns across whole biomes of the planet now," Graham says. "We're in the Pyrocene, the age of fire." 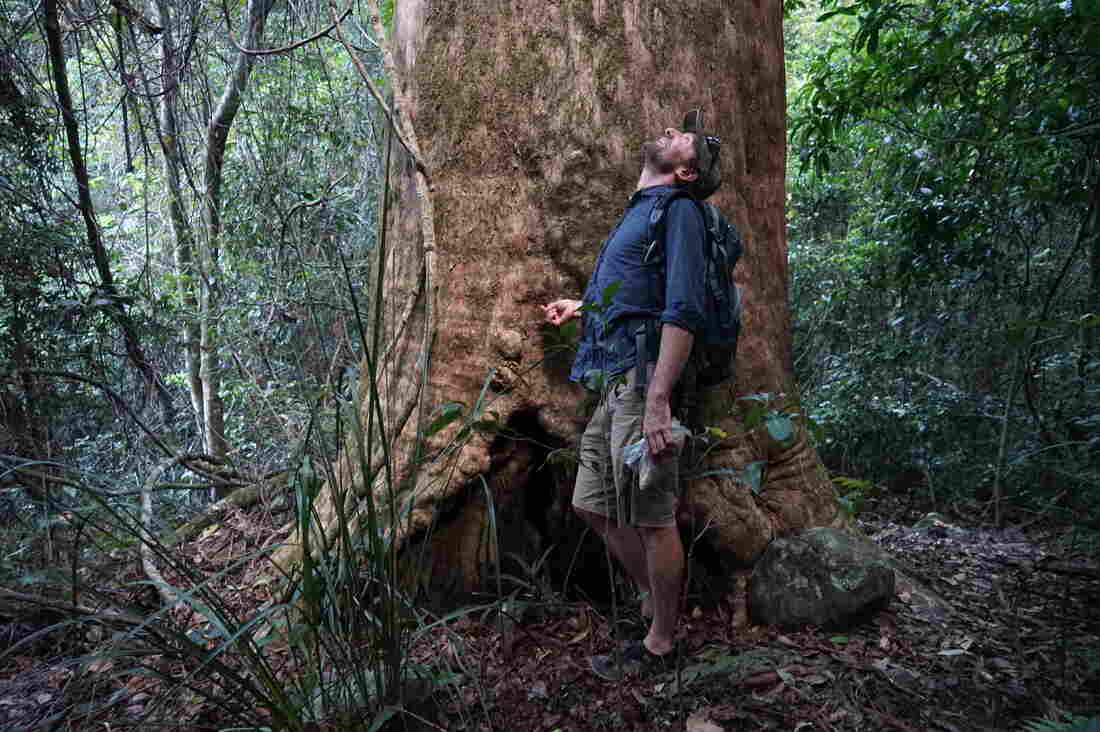 "There are very few forests on the planet that are as old as these," says ecologist Mark Graham. It's a global tragedy, he says, that so much of them burnt. Nathan Rott/NPR hide caption

Australia's season followed years of increasingly deadly and large fires around the world. Flames scorched more than a fifth of the country's forests, a globally unprecedented amount. That came amidst the hottest and driest summer on record. Researchers say human-caused climate change contributed to those conditions, making the fires more likely.

Globally though, the amount of land being burned in wildfires has actually declined over the last few decades. Despite the influence of climate change, human land-use, largely the increase of agriculture, has led to great reductions in the amount of savanna and grasslands that burn.

The same is not true for the world's rainforests. There, human land-use and climate change are working in disharmonious concert to intensify wildfire spread.

Take the Amazon, the largest tropical rainforest in the world. Last year, thousands of fires burned across Brazil, sparking concern around the world. Even the Pope chimed in.

Some of those fires may have started naturally, but the vast majority were intentionally started by humans trying to eke out a living off the land. Those fires were then able to keep burning because humans had changed the conditions on the ground.

Large swaths of old unbroken rainforest are not very susceptible to wildfire, "except in perhaps tens of thousands of year cycles," says Robert Kooyman, a botanist at Macquarie University who's worked in the Amazon and Australia's rainforests. 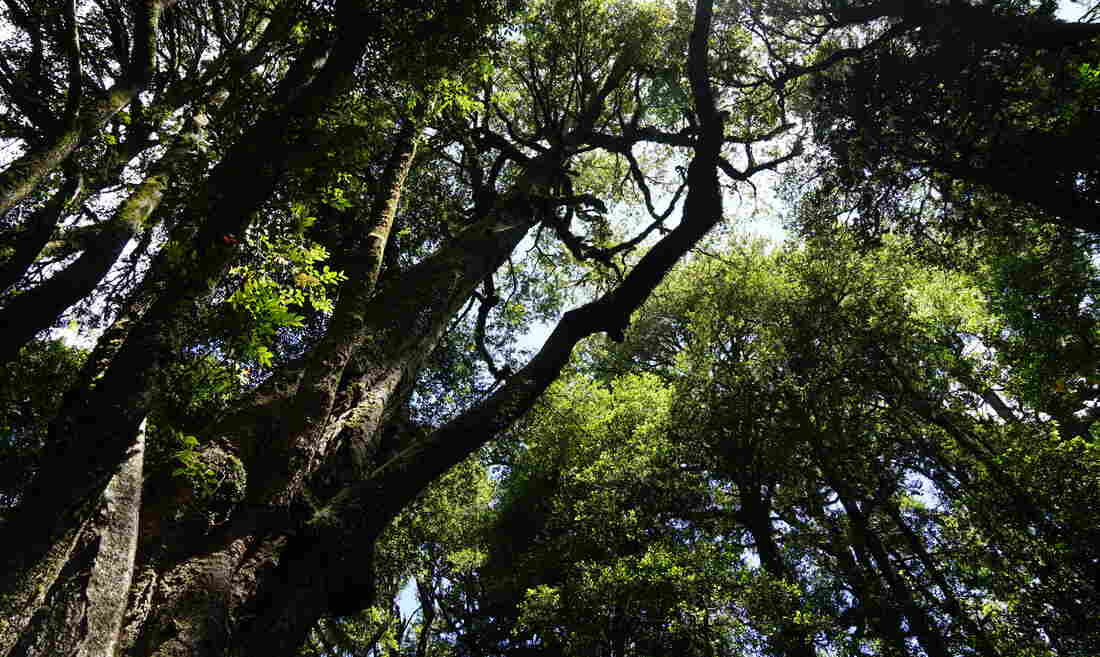 A dense canopy in sections of rainforest provides cooling shade to plant and animal species living below. In places the canopy burnt, it will be challenging for some of those species to regrow. Nathan Rott/NPR hide caption

But when humans break the continuity of the forest, fire finds footholds in the fractures left behind.

"The expansion of the road network, the settlement that follows it, the clearing, the logging — the whole disturbance matrix becomes a vehicle for expanding likelihood of fire," he says.

And when a fire burns in the rainforest, torching canopy and introducing more sunlight, it can change the type of vegetation that grows back, increasing the likelihood of future fire.

Ecologists warn similar patterns are happening in Southeast Asia and Central Africa, the latter of which is home the world's second-largest tropical rainforest, the Congo Basin Forest.

"There's little to room escape the fact that scale of fires, the extent of fires and the places that fires are burning, globally, has expanded," Kooyman says.

A feedback loop between fires and climate change

An expansion in the global range of wildfire is troubling for a number of reasons.

For one, "we all share the same atmosphere," says Dr. Nancy Fresco, a research professor at the University of Alaska Fairbanks.

Scientists worry that kind of feedback loop, set off by man-made emissions of greenhouse gases, could lead to runaway climate change, where climate-fueled fires cause even more fires.

The problem is amplified in the Arctic, where Fresco works, because the tundra is home to vast amounts of stored carbon that's locked away in the form of permafrost and peat. Colder temperatures slow the rate of decomposition, letting vegetation build up over thousands of years. Usually that carbon is frozen in place. Fires can unlock it though, by burning away the insulating layer of vegetation on the surface. And once that carbon is released, there's no getting it back.

The Arctic is warming twice as fast as the rest of the planet, making more and more of the tundra susceptible to more frequent fire.

Those fires and a warming climate are changing the makeup of the Arctic, Fresco says. Vegetation is changing. Older conifers, adapted to fire, are being overtaken by younger deciduous trees. That has ramifications for the broader ecosystem and the species that depend on the status quo. 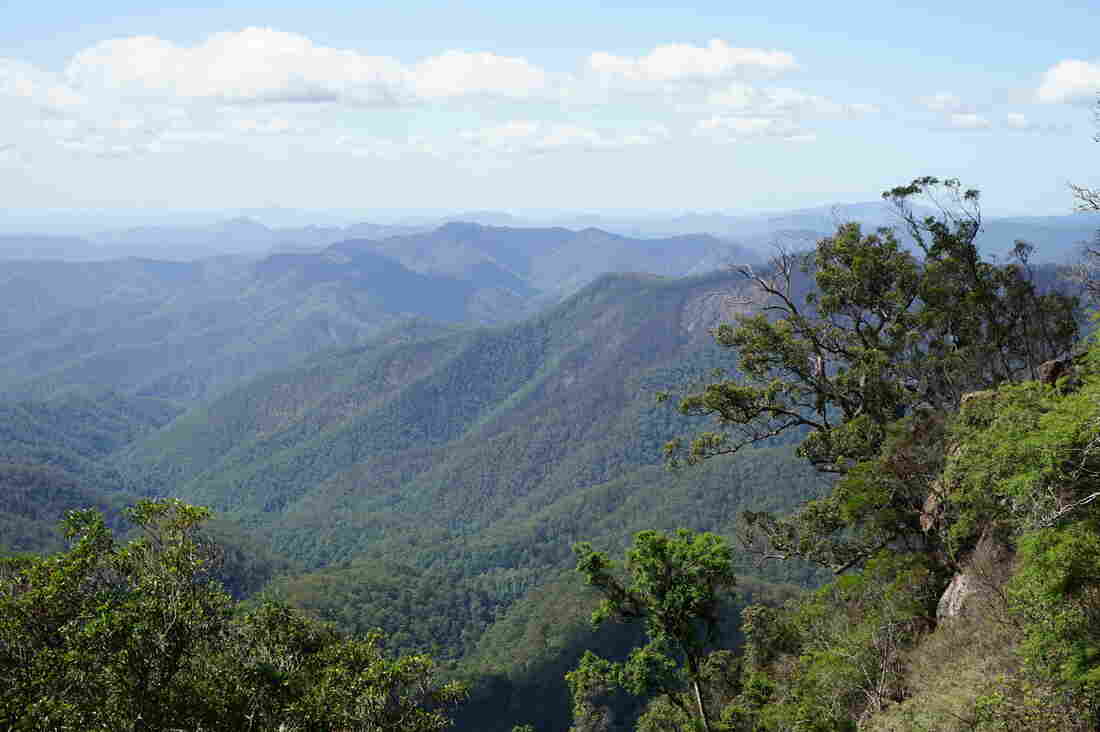 Standing with his hand on the gnarled trunk of a massive Antarctic Beech, a relic of Australia's Gondwanan past, he points out different eucalypt species that are growing in the surrounding area. This is the edge of a section of Antarctic Beech rainforest, fire-adapted eucalyptus trees mix with fire-vulnerable shrubs.

"If this were an isolated incident, a single event, I could accept that as a stochastic event, something that through time occurs when factors line up," Graham says. "But these factors have lined up on a landscape scale. That is deeply, deeply disturbing."

The vast majority of Australia's forests are adapted to fire and ecologists are confident that, given enough time, many of them will recover.

It's less clear if the burned portions of rainforest will follow suit. Because fire so rarely burns in these areas, it's hard to know how they'll react.

One thing is certain, though. There are only small portions of Gondwana rainforest left on the planet. They are refuge to plant and animal species that have existed for millions of years. And during Australia's recent fire season, those refuges shrank, further stressing these time capsules into our prehistoric past.

"At this type of pace, [for many species] there won't be anywhere left to go," Graham says. "The pace of change is simply too great."