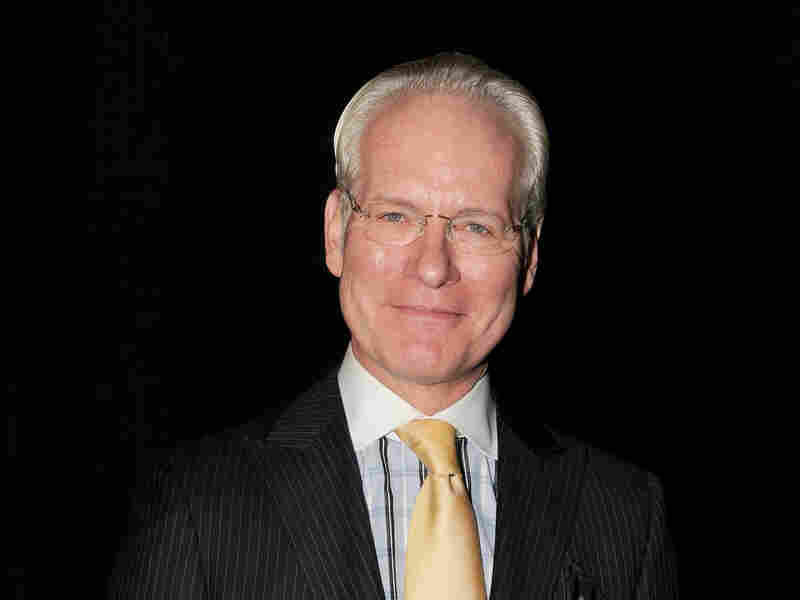 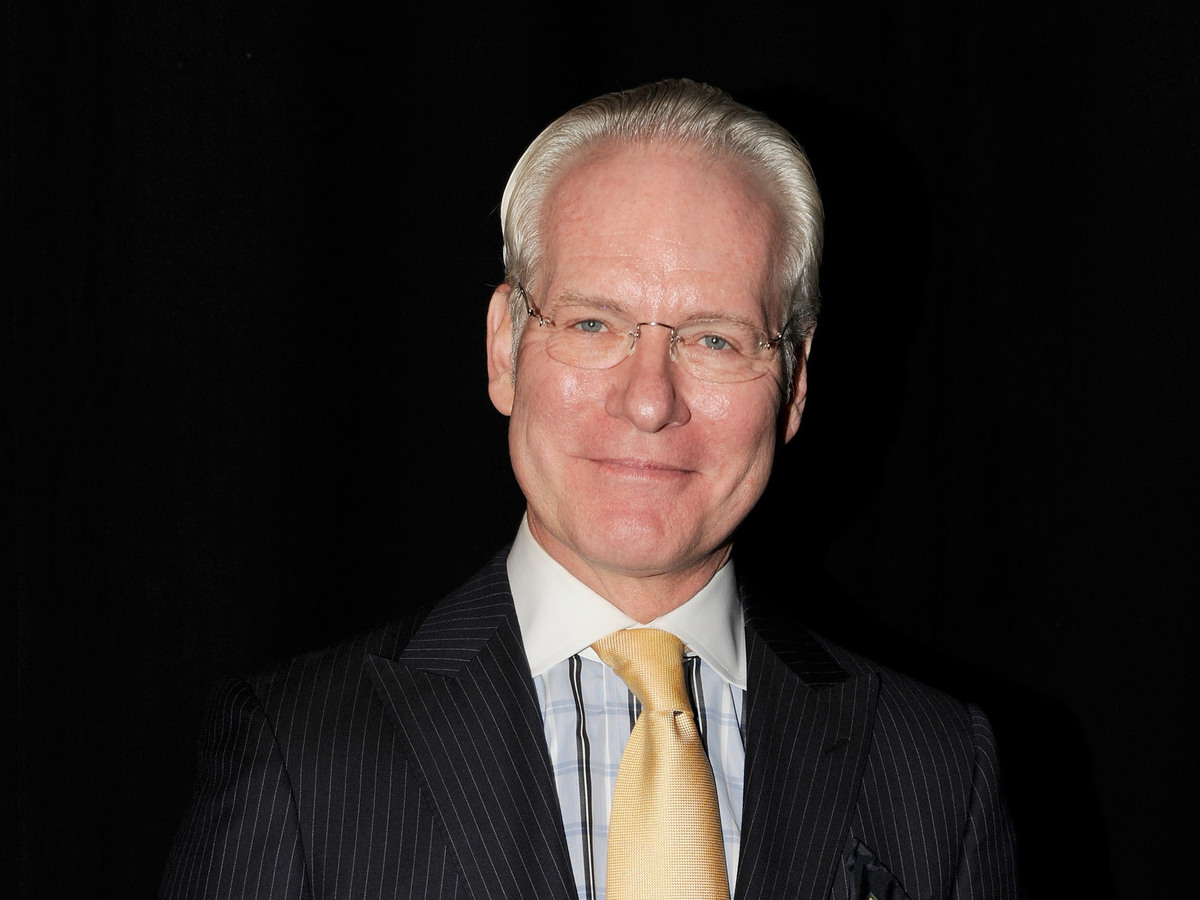 Tim Gunn is known for his style, his sharp opinions, his catch phrase – "Make it work!" – and for being impeccably dressed. He joins us this week by phone from his home, where he's probably wearing perfectly creased sweatpants.

Gunn's new Amazon show is called Making the Cut, so we've invited him to play a game called "Making the putt!" Three questions about golf.

Not My Job: Project Runway's Tim Gunn Gets Quizzed On Terrible Fashion

And now the game where we ask people who now have nothing better to do to do something worse. It's called Not My Job. Tim Gunn is known for his style, his sharp opinions on fashion, his catchphrase make it work, but mostly for always, always being impeccably dressed. He's joining us now from his home, and we assume even his sweat pants are perfectly creased.

TIM GUNN: Oh, thank you, Peter. I'm thrilled to be with you. I'm very honored.

SAGAL: We're always thrilled to talk to you. So first question - how are you doing with all this? How are you enjoying, you know, being stuck in your apartment all day?

GUNN: I am happy as a clam. I love being alone at home. This is a dream for me.

GUNN: I can't go anywhere. In some ways, it's a dream. I mean, it's a horrible thing to say given the crisis that we're in.

GUNN: But I have a beautiful view out of my kitchen window at the Amsterdam Avenue.

GUNN: I couldn't be more content, and I feel - to be honest, I feel very spoiled.

SAGAL: Maybe coronavirus is a fan. Who knows?

SAGAL: I have a question, though, Tim. You live, obviously, in a New York apartment. I live in a house, so I don't know what it's like. So are you - is everybody locked in their apartments? Do you, like, bang on the walls to communicate like people do in prison cells?

GUNN: I'm on a floor in my apartment with eight other or seven other apartments. Everyone is gone. They're in their second homes. I'm the only one on this floor who doesn't have a second home. And frankly, if I had a second home, I wouldn't go to it.

GUNN: I want to be in New York. I want to be here feeling the pulse of what's happening. And I want to be supportive. So I'm not going anywhere. But I am alone.

SAGAL: It's a - it would also be a good time to break into their apartments and make fun of their clothing.

GUNN: I have no desire to do that.

SAGAL: Now, I know you're busy. You have a new show. I'm assuming that means that you, like everybody else, are doing, like, remote video meetings.

SAGAL: How could you be bad at it? You were born to be on camera.

GUNN: Well, I had this - I bought a tripod, and I put my phone on it. And I look awful. I can't get a correct view of what I want. But at the same time, compared to everything else, who cares?

SAGAL: Yes. There is always that. But I think I'm going to ask you a question that has been on my mind since this whole thing began, and I bet it's true of most people in the country. What does Tim Gunn wear to a video meeting?

GUNN: Well, I'm - owing to the fact that I'm in my apartment and that I'm not going anywhere, I wear a turtleneck and a pair of jeans.

SAGAL: Which is, like, so much better than what everybody else does.

GUNN: Peter, I will confess to you right now...

GUNN: ...In our conversation, I'm wearing my pajamas.

SAGAL: Are they - I'm imagining that your pajamas would be excellent.

GUNN: No, not at all. I mean, honestly, they're wool. They're J.Crew. I have a bathrobe on.

SAGAL: And, of course, the little pocket square. That's fine. I think...

SAGAL: You - does it bother you that you haven't been able to have an occasion to wear a suit, which is how we all know you?

BURKE: Can I make a suggestion, Tim?

BURKE: If you have a full-length mirror, just paint a suit onto it. And then you can kind of step in, and then it looks like you're wearing a suit. And you don't have to go all to the trouble of putting on one.

SAGAL: Well, Adam has been spending a lot of time by himself, as well. Yes.

SAGAL: Let's talk about the new show. It's called "Making The Cut," and you reunited with Heidi Klum from...

SAGAL: You're traveling all over the world for this show. How do you handle all the travel? Is that something you enjoy?

GUNN: Well, we didn't have that many destinations. But, yeah, packing is a pain (laughter).

SAGAL: Yes, especially for you because you, of course, have to bring along, like, you know, a look, right?

GUNN: Well, I'm responsible for my own wardrobe, so yes, I brought everything that I needed to wear. I had four suitcases...

GUNN: ...That were big. But I'm very meticulous about everything, and everything needs to be in a place because otherwise, my brain gets completely muddled.

SAGAL: Well, I was just wondering because, obviously, you have to do that. You're Tim Gunn. You have to show up, especially on camera, looking great every time. Do you ever wish, given that, that you could be someone like me, who could just show up wearing the same stained schmatta I had on yesterday...

SAGAL: ...And nobody blinks an eye because they don't expect anything?

GUNN: Peter, that's not you.

SAGAL: If you were here, you could see.

GUNN: I have to tell you this. I regret that I don't have someone to tell me that my tie is crooked because ties, like, migrate.

GUNN: We can't see them.

BURKE: Do you think people are afraid to tell you that your tie is crooked because they're thinking...

BURKE: ...Oh, no, that's how they're wearing them in Paris this year? Like, people just...

SAGAL: Yeah. Who would ever come up to you and correct you? I'm sorry, no.

GUNN: If you can't change it, don't tell them. But if you have spinach in your teeth, tell me.

SAGAL: If you walked out and had spinach in your teeth, the next day, people all over this country and world would be putting spinach in their teeth.

SAGAL: They'd say, well, Tim Gunn had it. It must be cool. Yeah.

SAGAL: Well, Tim, it is always such a pleasure to talk to you. But this time, we have invited you here to play a game we're calling...

SAGAL: ...New show. It's called "Making The Cut." We thought we'd ask you about making the putt - that is, three questions about golf. Now...

SAGAL: I should say - yes. We didn't know for certain that you're not a golfer, but we were certain you would never, ever dress like one.

SAGAL: Bill, who is Tim Gunn playing for?

SAGAL: Here we go. First question. If you're looking to add a bit of excitement to your golf game, head to Brisbane, Australia, where a local golf course includes which of these unique obstacles? Is it, A, the water hazards are filled with killer sharks; B, the land is shared with a hunting preserve, so wear even oranger (ph) pants; or C, it is on alternate weekends bombed by the Australian Air Force?

SAGAL: B, that the land is shared with a hunting preserve, so wear even oranger pants.

SAGAL: No. I'm afraid it was A, killer sharks.

SAGAL: It's right on the sea coast, and the water hazards are, like, inlets and tidal pools. And they do, in fact, have sharks in there looking around. So if you hit a ball into one of these, do not go get it.

GUNN: Who in their right mind would golf there?

SAGAL: Who knows at that point? All right. You have two more chances. Here we go. Here's your next question. Some people love golf. Some people really do not. Movie director John Huston really did not like golf, but he once did what? A, he flew over a celebrity golf tournament and dropped 5,000 golf balls onto the course; B, he introduced combat golf, a sport in which you hit the ball directly at your opponent; or C, he tried to cast golf great Sam Snead in the Humphrey Bogart role in "The African Queen."

SAGAL: You're right. That's what he did.

SAGAL: The - our crowd is so excited for you.

SAGAL: Yes, he did that. He flew over a celebrity golf tournament, dropped 5,000 balls. Hilarity ensued. OK, last question - if you get this, you win. Again, last question. Hardcore golfers will famously play anywhere they can, which is why you can golf on a course in which of these places? A, on the slopes of an active volcano in Indonesia; B, on the actual grounds of the Louisiana State Penitentiary; or C, on the inside of the oval at the Indianapolis Motor Speedway?

SAGAL: A, on the slopes of an active volcano in Indonesia.

SAGAL: But they were all correct. You could play golf in any one of those places.

GUNN: Oh, they were all correct?

SAGAL: Yes, they are. You could go play golf...

GUNN: You know, that's insane. I don't understand the culture of golfing, and I don't think I want to.

BURKE: That volcano one - wouldn't it be really easy to get it into the hole?

SAGAL: Bill, how did Tim Gunn do on our quiz?

KURTIS: Tim Gunn won, and he did it in his pajamas.

SAGAL: Tim Gunn's new Amazon show is called "Making The Cut." Tim Gunn, thank you so much for joining us again on WAIT WAIT... DON'T TELL ME.

(SOUNDBITE OF SONG, "SUIT AND TIE")

SAGAL: In just a minute, yes, we can of beans in our Listener Limerick Challenge. Call 1-888-WAIT-WAIT to join us on the air. We'll be back in a minute with more of WAIT WAIT... DON'T TELL ME from NPR.