Accessibility links
Life On The U.S.-Mexico Frontier Dramatically Altered By Partial Border Shutdown The coronavirus outbreak led President Trump to close U.S. borders with Canada and Mexico last week. At the southern border, the closure is affecting life on both the U.S. and Mexico sides. 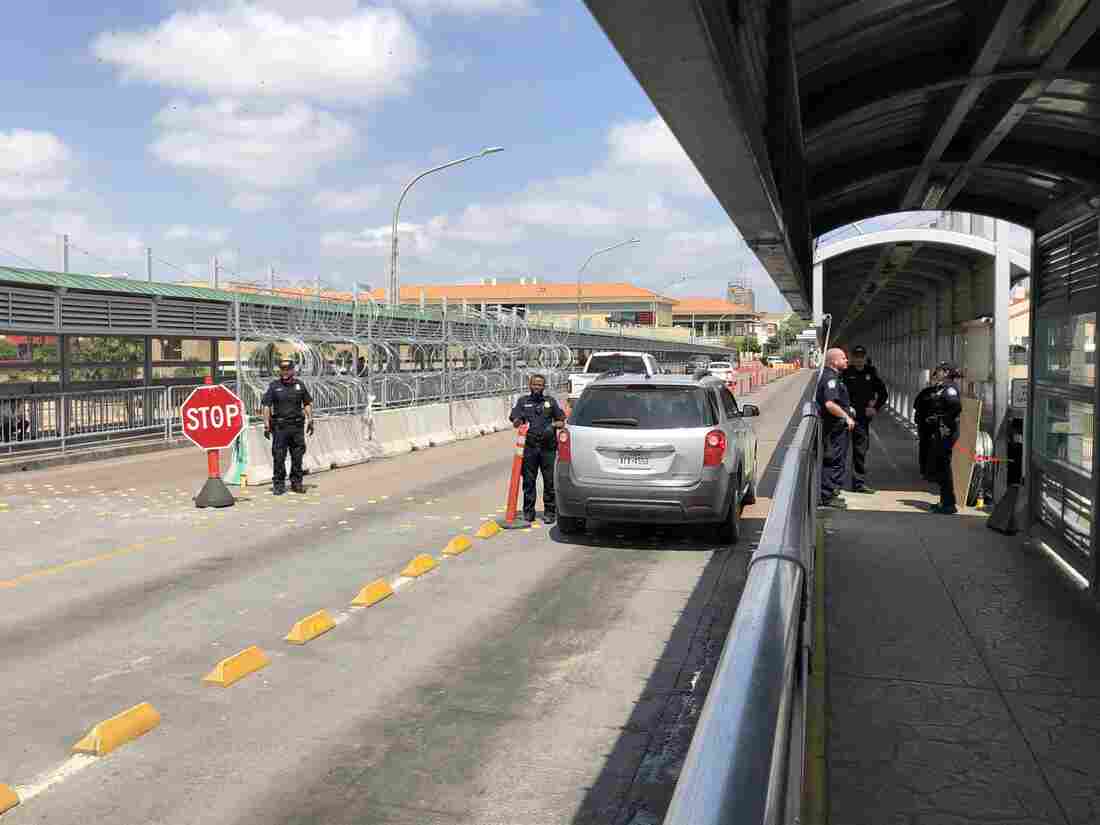 Gateway to the Americas Bridge connecting Laredo, Texas and Nuevo Laredo, Tamaulipas, Mexico, has been nearly empty. On a normal day, about 10,000 people cross from Nuevo Laredo into Laredo. This week, it's barely a trickle. John Burnett/NPR hide caption 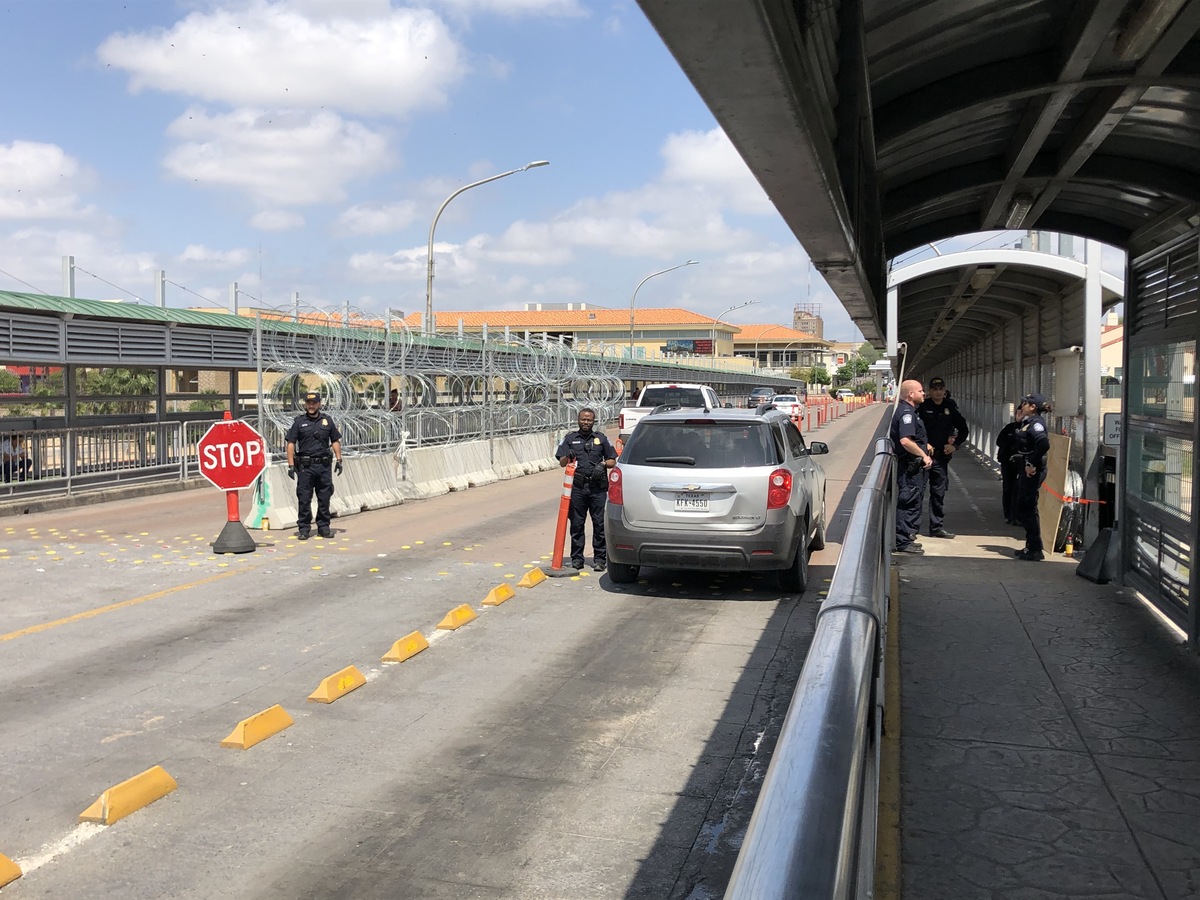 Gateway to the Americas Bridge connecting Laredo, Texas and Nuevo Laredo, Tamaulipas, Mexico, has been nearly empty. On a normal day, about 10,000 people cross from Nuevo Laredo into Laredo. This week, it's barely a trickle.

The streets of downtown Laredo, Texas, are deserted. For decades, this dense retail district has catered to Mexican shoppers coming across the bridge from Nuevo Laredo. But these days, stores like Cindy's Electronics, Classic Perfumes, and Casa Raul Mens' Clothes are shuttered.

"Now our business has dropped 80 to 90%," says Natividad Dominguez, leaning on a glass case full of empanadas, turnovers and donuts at Pano's Bakery. "People would come across the bridge and pick up a donut. But no more. It's affecting us a lot."

The unprecedented partial closure of the entire U.S.-Mexico border has crippled commerce near the bridge as the pandemic stokes fear on both sides. The Trump administration shut down all nonessential crossings on the southern and northern borders last week, including shoppers, visitors, tourists and migrants, to check the spread of coronavirus.

In the long history of these twin frontier cities, there's never been anything like the coronavirus border shutdown. Never — not even after Sept. 11 — has the U.S. government closed all 7,479 miles of borders with Mexico and Canada.

Former Border Patrol Chief Ron Vitiello spent 33 years protecting the nation's boundaries. In that time, the agency closed individual ports of entry because of floods, protests, or unruly migrants. And in those limited areas, he says, local communities suffered.

"But nothing on the scale of what we're seeing now," Vitiello says. "In my experience, when the borders close it is going to be difficult for the region. The communities along the border are interdependent as it relates to culture, trade and just how business is conducted."

This week, Mexican protestors in Nogales, Sonora, blocked the border crossing with Arizona, and held up signs reading "Stay At Home." They demanded their government screen all Americans heading south.

But at the Gateway to the Americas Bridge connecting los dos Laredos, as they're called, Mexican officials are letting anyone in. A health official with a thermometer asks people entering Mexico where they're coming from, then he cheerfully waves them in.

In Nuevo Laredo, people are all over the streets. Life goes on without the strict rules limiting social contact that have been imposed in Texas.

Farther west, the Mexican border state of Chihuahua announced that migrants deported from El Paso to Ciudad Juarez will be sheltered for two weeks of quarantine.

Father Antonio Llano, a retired Catholic priest on his way to visit his mother's grave, couldn't believe what the bridge looked like.

On a normal day, about 10,000 people cross from Nuevo Laredo into Laredo. This week, it's barely a trickle.

Thousands of asylum-seekers living precariously in Mexican border cities, who are waiting for a decision by a U.S. immigration judge, are expecting to stay longer as their hearings are rescheduled.

Notably, trade continues to flow. Some 8,500 trucks rumble north through Laredo every day, making it the nation's number one commercial port.

But Mexican business owners like Alma Gonzalez are barred from crossing into Texas. She owns the Nutrition Club near the bridge in Nuevo Laredo, a shop that makes health shakes.

"We get gas over there, we buy our clothes," she says, "I get supplies for my shop like bottled water. So this affecting all of us."

Currently, there are no cases of the sickness in Nuevo Laredo, though there's concern that Mexican authorities are under-counting coronavirus throughout their territory. And people are on edge.

"If you place this prayer cloth full of love and protection on your head and your heart," says a soothing voice coming over a taxi driver's radio, "it has the power to cure you."

Meanwhile, Farmacia Guadalajara has had to limit customers to only three bottles of disinfectant at a time.

"Lots of people came and engaged in panic buying," says cashier Hector Cabrera. "We had people buying more than 10 bottles of Lysol. They were acting—how do you say it?—compulsively."