Accessibility links
Coronavirus Relief Bill Challenges All That Libertarians Believe In In years to come, how will fiscal conservatives who voted for $2 trillion attack the cost of budget items that will now look like rounding error or "decimal dust"?" 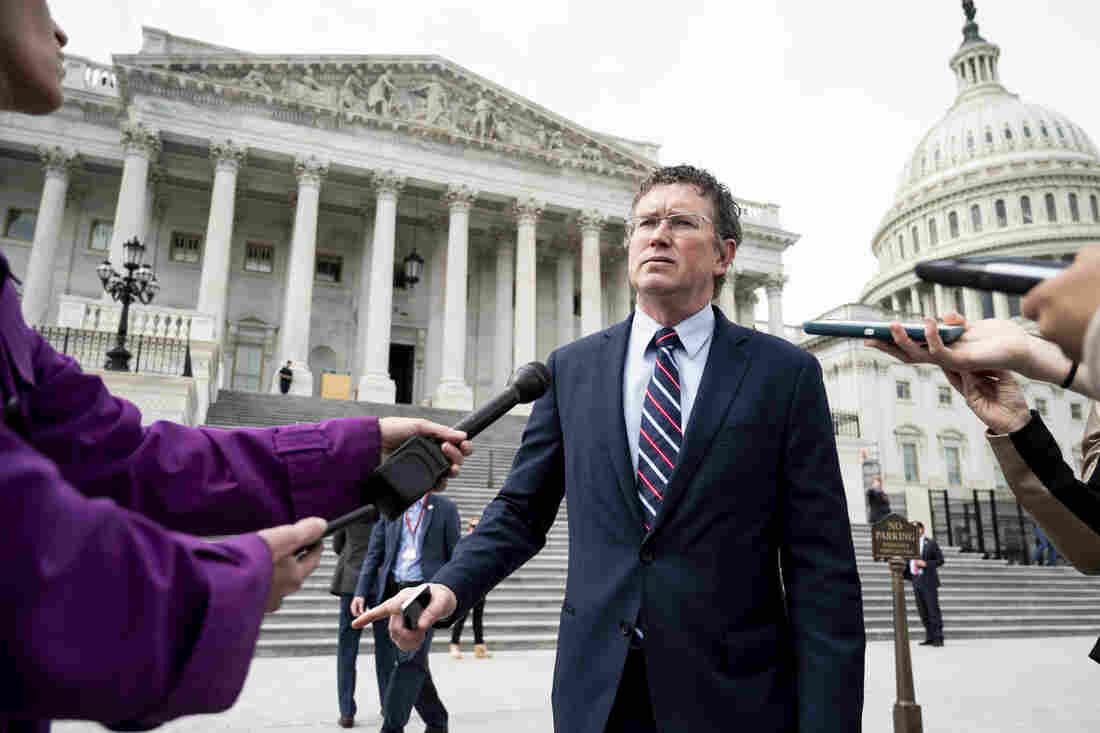 Rep. Thomas Massie, R-Ky., at the Capitol on Friday, tried to force a recorded vote on the $2 trillion coronavirus relief bill. Massie and other libertarians worry the bill will ruin the United States' creditworthiness. Bill Clark/CQ-Roll Call via Getty Images hide caption 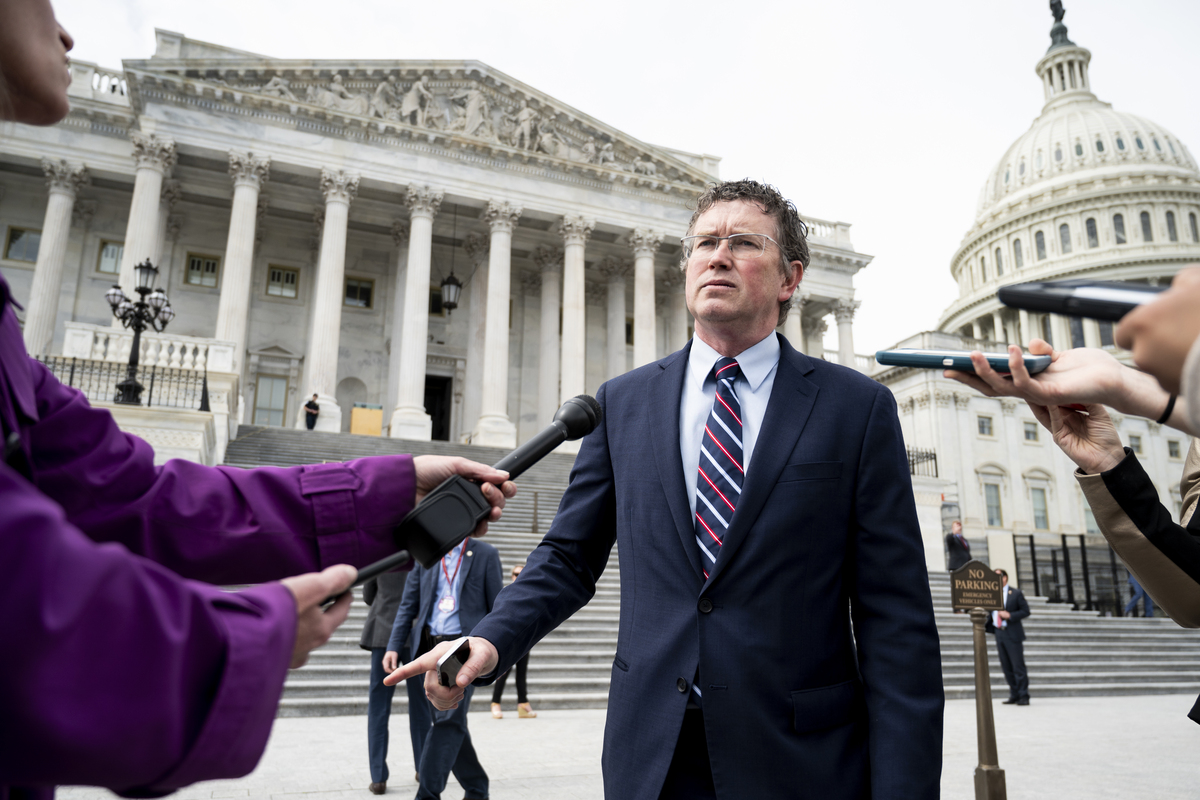 Rep. Thomas Massie, R-Ky., at the Capitol on Friday, tried to force a recorded vote on the $2 trillion coronavirus relief bill. Massie and other libertarians worry the bill will ruin the United States' creditworthiness.

Let us all have a moment of sympathy – and perhaps even understanding — for Thomas Massie, Republican of Kentucky.

Massie was the guy who caught hell from all sides Friday when he tried to force a roll call vote on the coronavirus relief bill in the House of Representatives. He said he wanted every individual member to record his or her vote on the gargantuan $2 trillion package, which he called the biggest relief bill in the history of mankind.

For Massie and many like him, the bill that aims to forestall economic disaster in the face of a pandemic is, in itself, a fiscal calamity and a radical turn in governing philosophy. Letting this go without a recorded vote was capitulation on a profound scale — a violation of all he held sacred.

"If this bill is so great for America, why not allow a vote on it?" he fumed on Twitter.

Are they afraid of the truth? I’ve been told that they don’t even have 1 minute available for me to speak against this bill during the 4 hour debate. The fix is in. If this bill is so great for America, why not allow a vote on it? Why not have a real debate? #SWAMP

One reason at the time was that more debate and deliberation would mean Americans would have to wait that much longer for the vast amounts of money soon to geyser out of Washington.

Another was that bringing House members back to vote would mean hundreds of people returning to the Capitol, some traveling across the country to be there, risking exposure to the virus or sharing it with others.

Nonetheless, Massie had a point with his cri de coeur for conservatism.

Explicitly, the CARES (Coronavirus Aid, Relief and Economic Security) Act spends money faster than any legislation in history, shoveling it out with an air of near-desperation. That strikes fear in those who routinely regard all government with suspicion and the government in Washington with the most suspicion of all.

Implicitly, the act says that when the chips are down, we as a nation turn to our national parent — the federal government. That has to be anathema to a libertarian such as Massie, who claims that label even as a Republican member of Congress (as does his fellow Kentuckian, Sen. Rand Paul, who didn't vote on the bill in the Senate because he has tested positive for the coronavirus).

For now, we are in a crisis mode. But in years to come, how do fiscal conservatives who voted for $2 trillion attack the cost of budget items that will now look like rounding error or "decimal dust"?

Speaking about federal outlays decades ago, Republican Senate leader Everett Dirksen once joked: "A billion here, a billion there and pretty soon you're talking about real money."

Have we now translated that to the language of trillions?

If one were writing a 30-second TV spot attacking a free-spending Congress in the past, one might have written something like this: "This is an unprecedented gusher of taxpayer money — with no offsetting revenues or spending cuts — that not only balloons the federal budget but triples this year's anticipated deficit of a trillion dollars (already among the highest in history). With this single vote, Congress has added as much to the national debt as was accumulated in the first 200 years of the Constitution's existence."

Some who voted for CARES this week can expect to hear something like that on the airwaves someday, whether it's a totally fair characterization or not.

Yet the power of this current crisis and the force behind this bill in this hour was such that even the leading fiscal conservatives who would normally be front and center were conspicuous by their absence. President Trump wanted the bill on his desk now. The Senate had voted 96-0. So even members of the hard-line House Freedom Caucus stood back as a big bipartisan majority of the House played the matador and let the bull roar past.

That's what Massie decided he could not brook without a protest. Was it a grandstand play? Was he being a showboat? Perhaps, and if that is the judgment of his colleagues and constituents, he will pay a price for it. The rest of us will have to judge for ourselves.

But the derision arrived without delay. In two tweets that represented a rare meeting of their minds, President Trump demanded Massie be ousted from the Republican Party and former Democratic presidential nominee John Kerry denounced the Kentuckian for exercising his constitutional right to be an unmentionable body part.

Trump tweeted that he never knew Kerry had such a sense of humor, and for a fleeting moment, the nation finally seemed unified on something.

Back on Capitol Hill, the floor leaders of both parties scrambled to stymie Massie. Within a few hours, they had established the rule of debate on the bill so that the Senate's version of CARES could be approved without a roll call vote.

A frustrated Massie had to fulminate on social media while the biggest spending juggernaut of all time rolled down Pennsylvania Avenue for a hasty signing at the White House.

And while his lonely crusade was joined by none of the leaders of his own party, Massie was at least speaking for others across the country who could scarcely believe what they saw unfolding on C-SPAN — and the lack of any meaningful opposition in Washington.

Matt Welch, an editor-at-large for Reason, a libertarian magazine, called the CARES Act "a massive course of experimental economics" and compared the American public to "laboratory rats." Even the trillion-dollar stimulus package of President Barack Obama, opposed by Republicans in 2009, had not been so robust.

"There is no more politics of fiscal prudence in America," Welch added, "just a competition to see who can wag the biggest fire hose."

Indeed, some of the Republican senators who ultimately voted for the bill gave earnest speeches on the floor of the Senate this week bemoaning its necessity. Some invoked the spirit of Ronald Reagan's presidency or of the America he strove to represent and restore. (His 1980 campaign included the slogan: "Let's Make America Great Again.") Indeed, the Reagan era of the 1980s was in many ways a pushback on Franklin D. Roosevelt's New Deal — albeit a half century late.

"A sharp break with the past did in fact occur in March, 1933," wrote the historian Arthur M. Schlesinger Jr., referring to FDR's first inauguration in the The Cycles of American History. "The essence of that break lay precisely in the changes from volunteerism to law as the means for ordering the economy."

Put another way, the 1933 break was between reliance on the individual and reliance on the collective, between libertarian conservatism and Big Government liberalism. Those competing forces have risen and fallen in relation to each other in our shared national experience ever since.

It would be too much, or at least too soon, to say that what happened in Congress this week was a comparable turning point in that long struggle. But to Thomas Massie and many like him, it must have felt much the same.