Accessibility links
WHO Reviews 'Current' Evidence On Coronavirus Transmission Through Air A scientific brief from the World Health Organization says "current evidence" points to infectious respiratory droplets passed in "close contact" situations, but some say it's too soon to be sure. 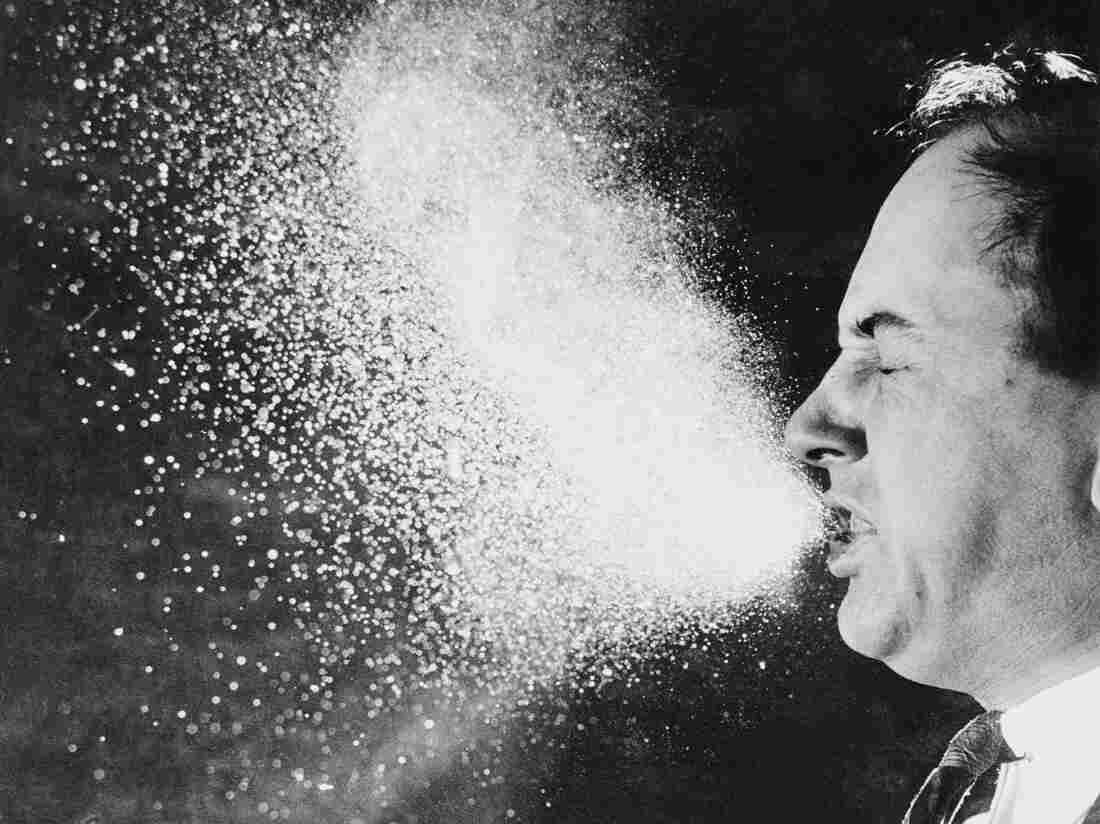 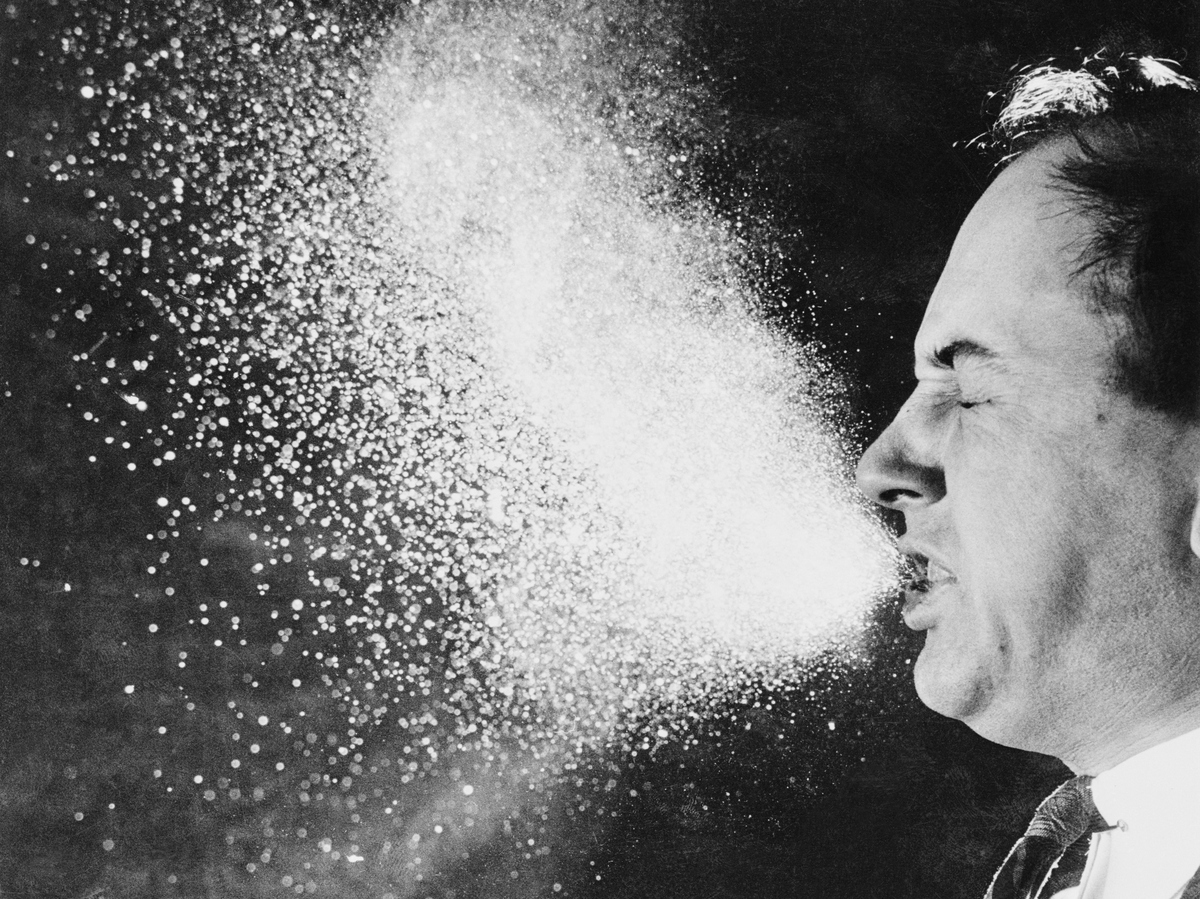 A photograph from 1940, taken for infectious research purposes at the Massachusetts Institute of Technology, shows respiratory droplets released through sneezing.

The World Health Organization says the virus that causes COVID-19 doesn't seem to linger in the air or be capable of spreading through the air over distances of more than about 3 feet.

But at least one expert in virus transmission said it's way too soon to know that.

"I think the WHO is being irresponsible in giving out that information. This misinformation is dangerous," says Dr. Donald Milton, an infectious disease aerobiologist at the University of Maryland's School of Public Health.

The WHO says that "according to current evidence," the virus is transmitted through "respiratory droplets and contact routes." By that, the agency means the virus is found in the kind of big droplets of mucus or saliva created through coughing and sneezing.

These droplets can travel only short distances through the air and either land on people or land on surfaces that people later touch. Stopping this kind of transmission is why public health officials urge people to wash hands frequently and not touch the face, because that could bring the virus into contact with the nose or mouth.

Other viruses, however, get shed by infected people in a way that lets the germs actually hang suspended in the air for minutes or even hours. Later, these airborne viruses can get breathed in when other people pass by. Measles is a good example of that kind of transmission — the Centers for Disease Control and Prevention says, "Measles virus can remain infectious in the air for up to two hours after an infected person leaves an area."

The WHO said that this kind of airborne transmission of the new coronavirus might be possible "in specific circumstances and settings in which procedures that generate aerosols are performed," such as when a patient is intubated in a hospital or being disconnected from a ventilator.

Based on that, the agency recommends "airborne precautions" when medical workers do those procedures. Otherwise, the WHO says, health care workers caring for COVID-19 patients could use less-protective "droplet and contact precautions."

That troubles Milton, who says so little is known about this new virus, SARS-CoV-2, that it's inappropriate to draw conclusions about how it is transmitted.

"I don't think they know, and I think they are talking out of their hats," Milton says.

He says people like to think that there's some sharp, black-and-white distinction between "airborne" viruses that can linger and float in the air and ones that spread only when embedded in larger moist droplets picked up through close contact, but the reality of transmission is far more nuanced.

"The epidemiologists say if it's 'close contact,' then it's not airborne. That's baloney," he says.

When epidemiologists are working in the field, trying to understand an outbreak of an unknown pathogen, it's not possible for them to know exactly what's going on as a pathogen is spread from person to person, Milton says. "Epidemiologists cannot tell the difference between droplet transmission and short-range aerosol transmission."

He says these are hard questions to answer, and scientists still argue over how much of the transmission of influenza might be airborne. Some research shows that exhaled gas clouds from people contain a continuum of many droplet sizes and that a "high-momentum cloud" created by a cough or sneeze might carry droplets long distances.

What's more, one study of hospital rooms of COVID-19 patients found that "swabs taken from the air exhaust outlets tested positive, suggesting that small virus-laden droplets may be displaced by airflows and deposited on equipment such as vents."

Another study, in hospitals in Wuhan, China, found that most areas had undetectable or low levels of airborne virus.

In the face of this uncertainty, Milton thinks the WHO should follow the example of the CDC and "employ the precautionary principle to recommend airborne precautions."

"The U.S. CDC has it exactly right," he says, noting that it recommends airborne precautions for any situation involving the care of COVID-19 patients.

Of course, the world is struggling with a shortage of the most protective medical masks and gear. For the average person not working in a hospital, Milton says the recommendation to stay 6 feet away from others sounds reasonable.

He says if someone in a house is sick, it makes sense to have that person wear a mask and to increase the ventilation in the room, if possible, by cracking open a window. People shouldn't cram into cars with the windows rolled up, he says, and officials need to keep crowding down in mass transit vehicles such as trains and buses.